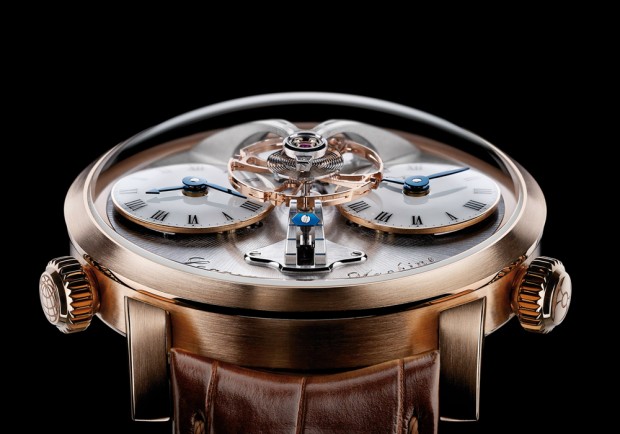 Another gorgeous luxury watch on the market today: the MB&F Legacy Machine N°1. It is a bit out of place when compared to some of its MB&F siblings. Still, it captures an elegance all its own.

Legacy Machine N°1 was conceived when Maximilian Büsser started fantasising: “What would have happened if I had been born in 1867 instead of 1967? In the early 1900s the first wristwatches appear and I would want to create three-dimensional machines for the wrist, but there are no Grendizers, Star Wars or fighter jets for my inspiration. But I do have pocket watches, the Eiffel Tower and Jules Verne, so what might my 1911 machine look like? It has to be round and it has to be three-dimensional: Legacy Machine N°1 was my answer.”

Legacy Machine N°1’s transcendental in-house movement bears testimony to the enormous talent of its creators. Jean-François Mojon and his team at Chronode (Best Watchmaker Prize at the 2010 Grand Prix d’Horlogerie de Genève) met the considerable challenge of developing the calibre for LM1 from a blank sheet, while acclaimed independent watchmaker Kari Voutilainen took responsibility for the aesthetic design and for strictly ensuring the utmost respect for tradition and fine-finishing. The movement of Legacy Machine N°1 proudly bears the names of both its creators, and is the first calibre other than Voutilainen’s own to bear his name.

Brand evangelist, digital marketer, cigar and spirits expert specializing in consumer tasting and educational events. Matthias made the long trek from his hometown of Portland, Oregon to New York City in 2007, and in nine years has hosted more than 120 events and helped promote and launch dozens of cigar and whiskey brands in the U.S. In 2016, he joined the Cigar Journal Tasting Panel, blind-reviewing pre and new release cigars.
« AIRE Ancient Baths New York: Body & Mind Reach Equilibrium» Doettling presents the world’s first travel safe: The Guardian