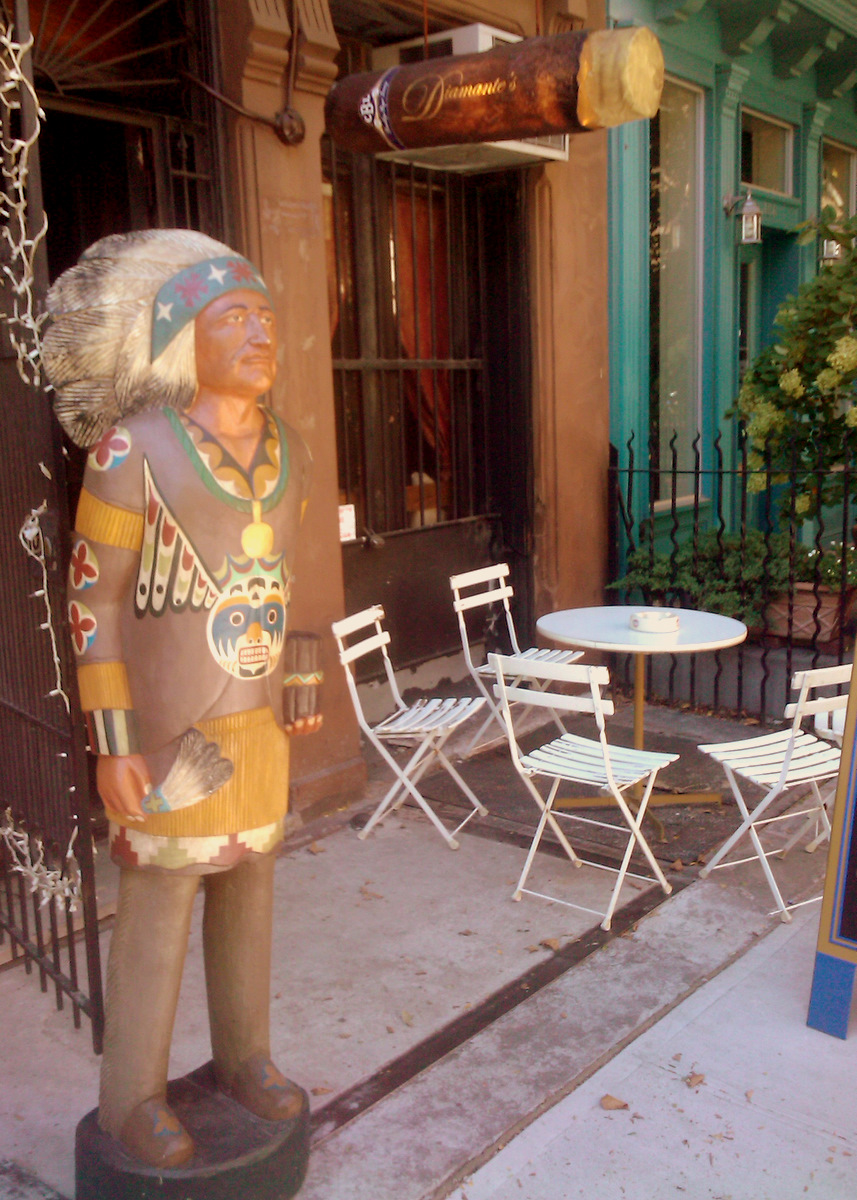 Today I had few extra free hours, so I decided to drop by one of New York City’s newest cigar lounges.  Diamante’s Brooklyn Cigar lounge, just off the C train Lafayette stop, really is a great place to drop by for a smoke.  The shop features its own boutique blend of cigars, made of Nicaraguan and Dominican grown Cuban seed tobacco. The atmosphere in the lounge is spectacular, definitely one of the most memorable experiences I’ve had since living in New York. I’d write about that now, but I’d really have to go into detail to give the lounge justice, and I think I’ll save that for an article on the lounge itself.

My first cigar at this lounge was the medium bodied boutique blend (torpedo shape). At $12, the price was pretty reasonable for a boutique blend. The lounge does offer some other big-brand sticks, but they were a bit pricey for me.  Below are my thoughts on the cigar.

Appearance/Construction: The appearance wasn’t the strength of this particular stick (I say that because I’m not familiar enough with this line to make a broader statement). It was a bit veiny, which some claim adds to the flavor (which for this cigar I could imagine that being true), but veins, especially large ones, tend to decrease the straightness of the burn, which did turn out to be the case with this particular stick.  The boutique cigars are also lacking a label, which was a bit disappointing because the lounge is beautiful and has a great vibe that an attractive label could definitely add to.  Rolling the cigar in my hands, however, I could tell that the cigar was packed well (confirmed also by the draw), and the hour and a half smoke that followed offered further confirmation.

Taste: This cigar kicked off with a big spice, and actually took me off guard.  Behind the spice were hints of woodiness and black pepper. After about the first inch, however, the spice backed off a little bit and the woodiness took a bit more prominence, along with hints of spiciness.  I matched this cigar with a cup of Columbian Sumatra coffee, which turned out to be an excellent choice as the two complemented each other perfectly.

At times there was a bit of harshness, but that faded quickly and didn’t detract very much

from the quality of the cigar. Around the second half of the cigar, a really wonderful sweetness took center stage along the now subtle spice, and the thick smoke produced by the cigar was earthy and sweet.  One thing I kept noticing was the excellent amount of smoke produced by the cigar, and the velvety smoothness of the smoke in my mouth.  As far as the burn goes, the veins in the cigar did end up being a bit problematic, but the cigar was generally very good at evening itself out.

Conclusion: This cigar was very good, but I’ll need to try another before I can feel confident in describing it as excellent.  At $12, it isn’t an everyday smoke, but I definitely recommend buying one, especially because the lounge is such an excellent place to hang out. Construction and lack of label aside, the taste was excellent and the draw pretty much perfect.

Brand evangelist, digital marketer, cigar and spirits expert specializing in consumer tasting and educational events. Matthias made the long trek from his hometown of Portland, Oregon to New York City in 2007, and in nine years has hosted more than 120 events and helped promote and launch dozens of cigar and whiskey brands in the U.S. In 2016, he joined the Cigar Journal Tasting Panel, blind-reviewing pre and new release cigars.
« Cigar Review: Illusione Epernay Le Ferme» Cigar Review: Berger & Argenti Entubar Robusto