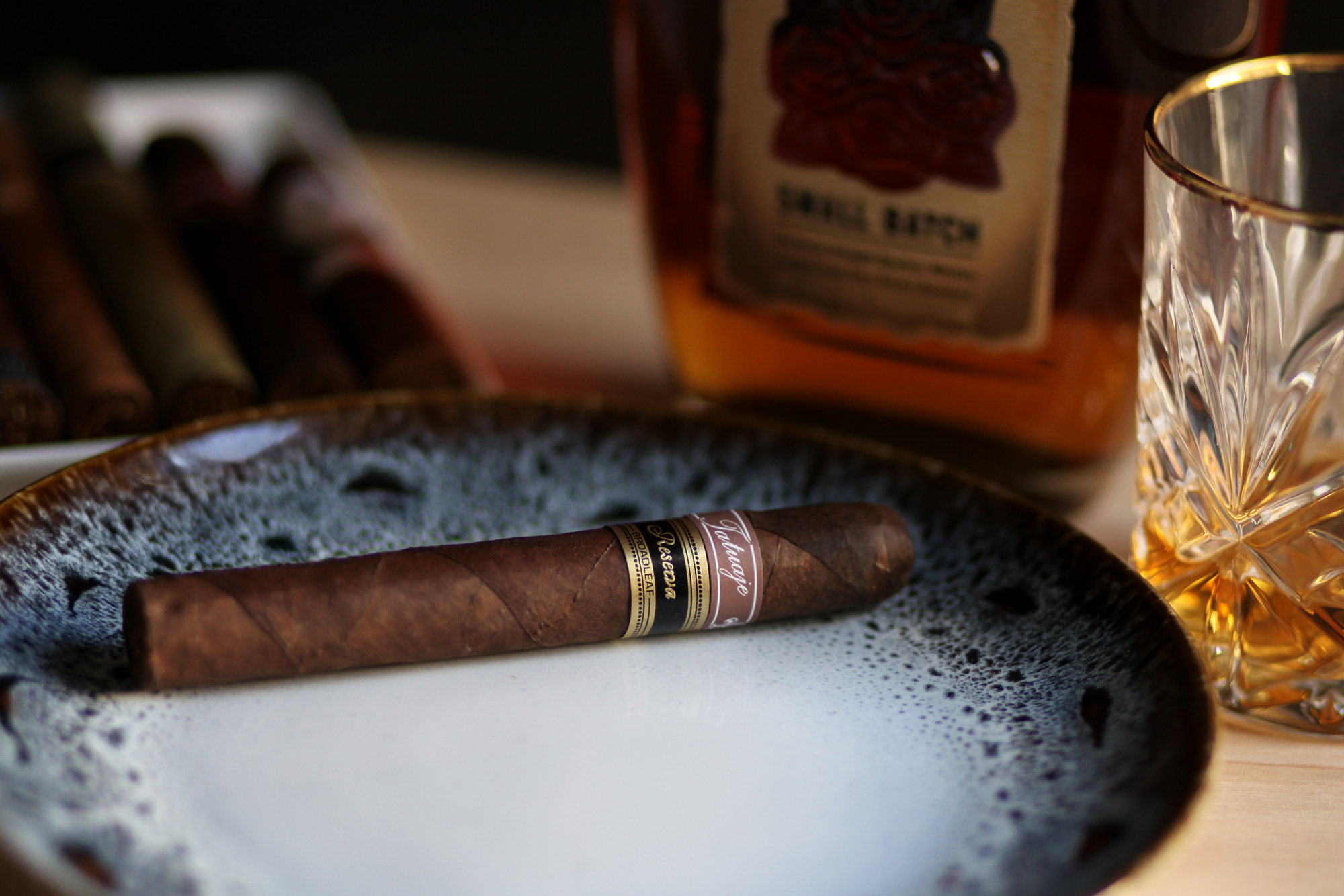 I recently made a stop at the Nat Sherman Townhouse and after finding out that no new shipments had come in since my last visit, I decided to try something from Tatuaje, a brand which I’ve generally overlooked after a handful of less than stellar experiences. The result is what’s up for review today: the Tatuaje Regios Reserva Broadleaf.

Right off the bat I can tell you that this cigar does deliver some of what you might be accustomed to with a Connecticut Broadleaf wrapper: lots of richness alongside sweet chocolate and coffee notes. But there’s a lot more to this cigar than any typical flavor profile, so let’s get on to the review. 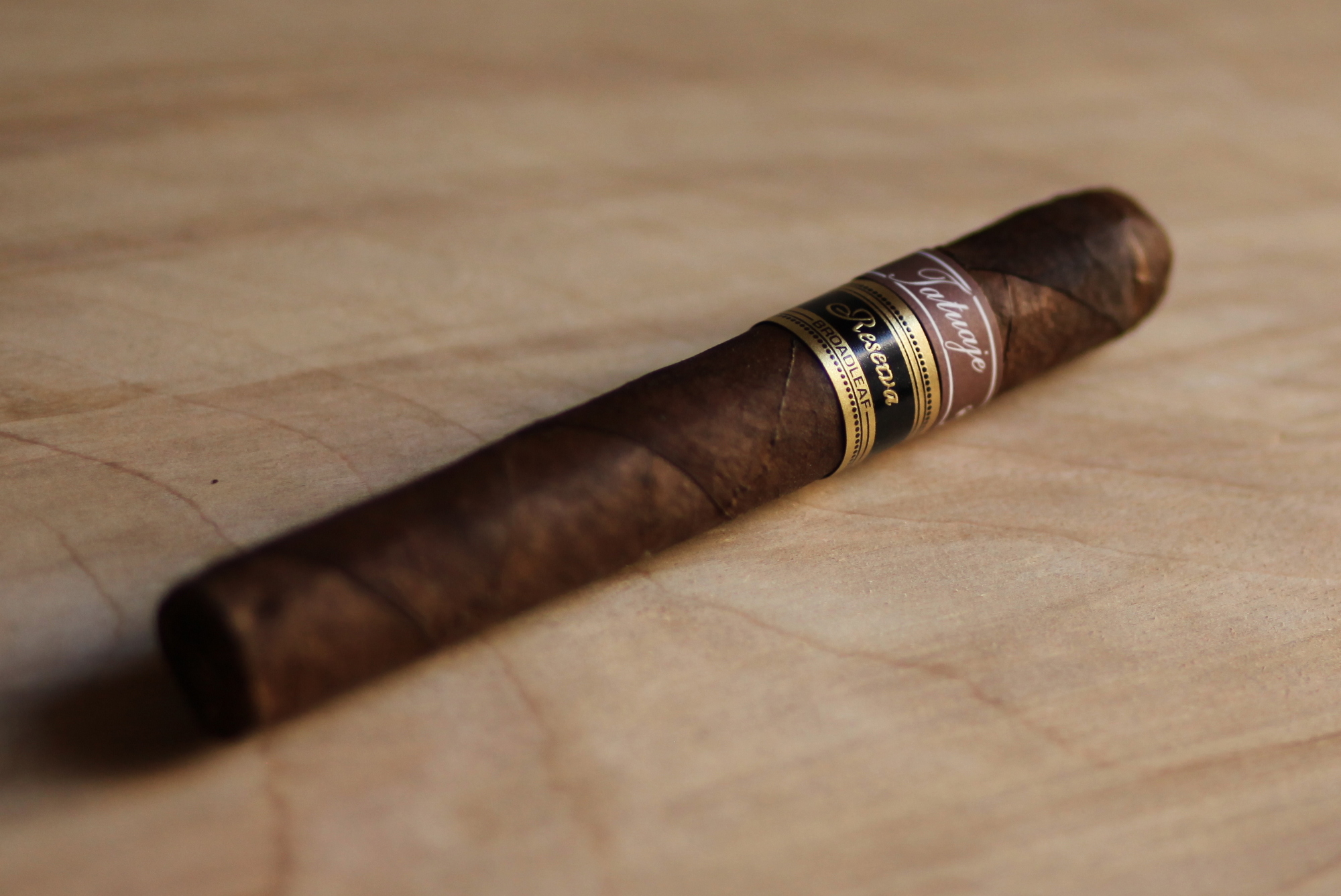 The Tatuaje Reserve Broadleaf features a somewhat rough, decently veiny Broadleaf wrapper. Branding on the cigar is your standard Tatuaje labeling with the additional Reserva Broadleaf band. The cigar is slightly springy when squeezed, and this is consistent down the cigar. Off of the foot, I pick up dry wood, some spice, and a slightly berry-influenced coffee. The draw is perfect, just the right amount of restrictiveness. The pre light draw is spicy, with a musty texture and aromas of dry wood.

At an inch in, the retrohale is now shifting between white pepper and sea salt dark chocolate. The burn is perfect.

At the beginning of the second third, leather is prominent, along with lemon peel and dry wood. The profile is considerably drier than the first third, though strangely the retrohale has settled down considerably.

At halfway, the smoke is musty and flavor is down to the lower end of medium. Notes include dry wood, black coffee, and touches of milk chocolate and cinnamon. Enjoyable, but I’m hoping the body and flavor make a comeback.

Moving into the final third, the earlier snickerdoodle note has morphed into a graham cracker flavor, and I’m picking up a spicy pickle flavor that works surprisingly well alongside the drier woodsy notes. Unfortunately, the remainder of the cigar (about the last 15 minutes) becomes bland, with dry wood as the only dominant note.

The Tatuaje Reserva Broadleaf is an enjoyable cigar, with a decent amount of complexity and a good story to tell. I really enjoyed the interplay between the dry notes (wood, pepper, leather) and the richer notes (chocolate, cinnamon and sugar). At times though, the smoke fell out of balance or became a bit bland. I may not be returning to it soon, but I’d recommend trying it to see if it’s right for you.

Brand evangelist, digital marketer, cigar and spirits expert specializing in consumer tasting and educational events. Matthias made the long trek from his hometown of Portland, Oregon to New York City in 2007, and in nine years has hosted more than 120 events and helped promote and launch dozens of cigar and whiskey brands in the U.S. In 2016, he joined the Cigar Journal Tasting Panel, blind-reviewing pre and new release cigars.
« Davidoff Year of the Rooster Review» 7-20-4 Lancero Review