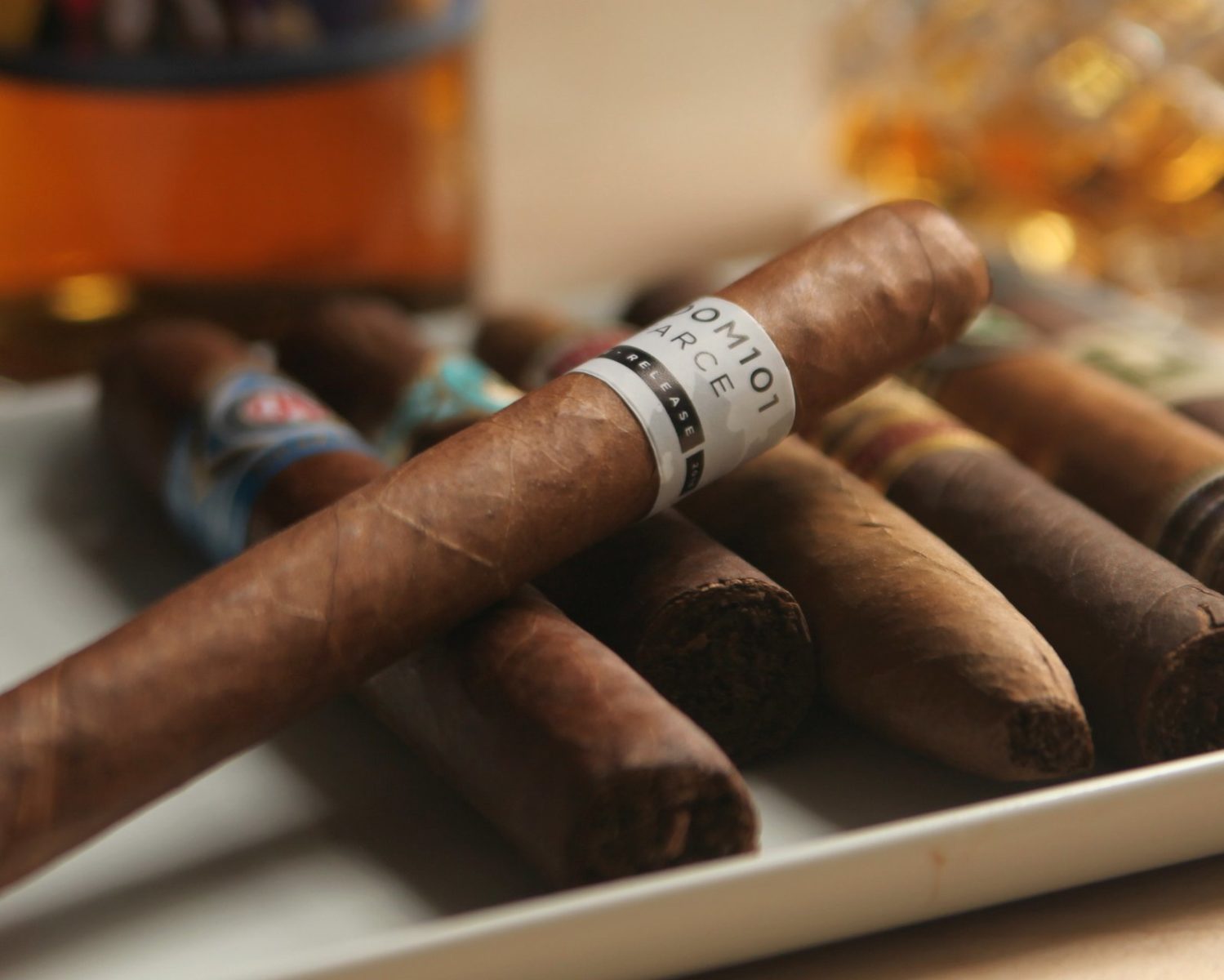 We continue our 2018 reviews today with the Room 101 Farce Lonsdale. Room 101 is a brand known for producing flavorful, deeply complex cigars. One of my favorites is the Room 101 Uncle Lee, a perfecto-shaped cigar which is sadly out of production.

In any case, the Room 101 Farce is a 2018 release which has gotten solid reviews around the cigar blogosphere. But the Lonsdale vitola has yet to be reviewed, so here we are. TLDR on this cigar: it’s incredible and a likely member of our Top 10 of 2018 list. 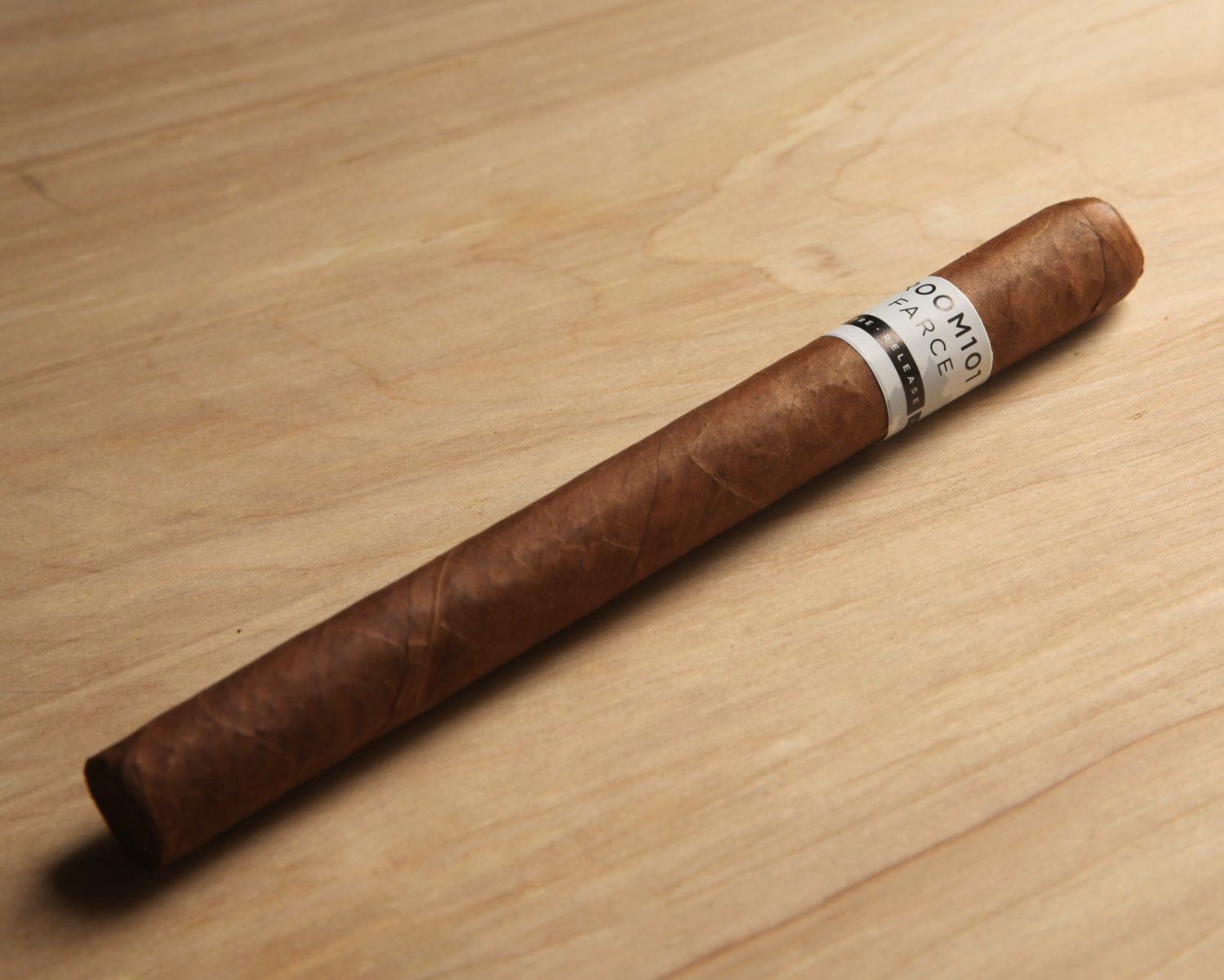 The Room 101 Farce is attractively put together. The outer wrapper looks fairly standard in color, but on closer appearance proves to have a very fine layer of plume and a velvety feel. The single black and white band plays nicely off of the light brown of the wrapper leaf, though I’m a bit vexed by “PRE-RELEASE” designation on the label. I bought this online from a major retailer so… isn’t it… released?

In any case, I use a straight cut to cut the cigar and test the draw. It’s just about ideal, maybe a tiny touch too restrictive. The cold draw is gentle and mostly straightforward, with hints of paprika, dry cedar, and light earthiness. Off the foot, the smell is similar but has an added nuttiness.

The Room 101 Farce Lonsdale kicks off with flavor-loaded smoke, at least partially the result of the small ring guage. The somewhat resistant draw hasn’t affected the smoke production, which is at or above average. The flavor profile is quite enjoyable, presenting a dominant cedar and black pepper that is augmented by bitter leather and salted popcorn. The smoke has an almost chewy character to it similar to a snickers bar, and strength and body are both medium plus. The retrohale is aggressive and dominated by freshly ground black pepper.

An inch in, the layered white ash is holding on to a mostly straight burn. The profile hasn’t veered from its primary breakdown, but every few puffs I pick up some vanilla notes that are a welcome balance to the more bitter notes.

As the cigar burns into the second third, the profile shifts more significantly, with the vanilla note moving from a secondary flavor up to a dominant flavor alongside the dry cedar an black pepper. On the nose, the smoke is fragrant and a great compliment to the intensity on the palate. Thankfully, the retrohale has toned down a lot, allowing it to become a more integral part of the experience. Smoke production improves even more, and the burn stays razor sharp.

All cylinders are firing now.

Also, a side note: when a cigar is this effortless to smoke and enjoy, you know you’re smoking a well crafted, well thought out product. During the second third, there are a few additional supporting flavors, including mild cinnamon and floral. Absolutely delicious.

In the final third, the body mellows while the strength remains medium plus. On top of the core profile a mushroom note gets layered in which in texture is similar to cream. Overall, an easy cigar to pick up. Much harder to put down.

It’s rare to find a cigar that balances complexity, power, and balance like the Room 101 Farce lonsdale. The cigar manages to take a somewhat dry, wood forward palate and keep it interesting with lots of nuances along the way, and the construction never fails. This cigar is an easy contender for our top 10 of 2018 list, and one you have to smoke if you are investigating 2018 releases.

Brand evangelist, digital marketer, cigar and spirits expert specializing in consumer tasting and educational events. Matthias made the long trek from his hometown of Portland, Oregon to New York City in 2007, and in nine years has hosted more than 120 events and helped promote and launch dozens of cigar and whiskey brands in the U.S. In 2016, he joined the Cigar Journal Tasting Panel, blind-reviewing pre and new release cigars.
« Moore & Bode American Fire Review» Moore & Bode Tambaku Review