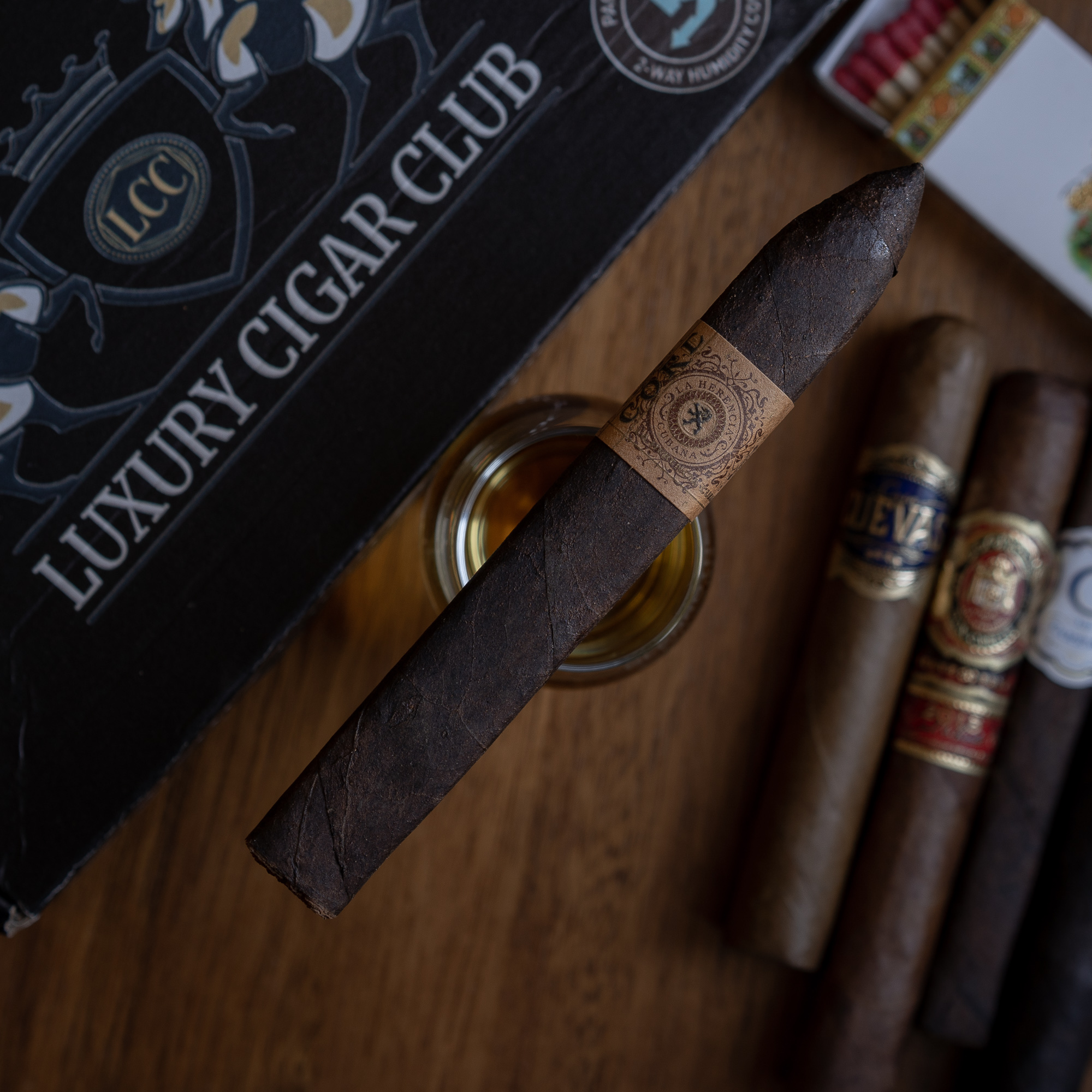 Today is a bit of a blast from the past. Though we typically like to review newer additions to the cigar world, today we’re reviewing the La Herencia Cubana CORE, a blend from AJ Fernandez that was originally released back in 2012 before he was the tobacco superstar that he’s recognized as today. The cigar is still available online for purchase or via Luxury Cigar Club, a cigar of the month service that I receive and find to be an excellent value.

I’ve got to be honest, the La Herencia Cubana CORE is not a particularly attractive cigar. The label does a bit too good of a job blending in with the wrapper leaf, making it hard for the cigar to stand out in my humidor.

The outer wrapper is a dark espresso brown and has a very rugged feel to it. When squeezed, the cigar has a decent amount of give, though it seems to be packed consistently the entire length.  The foot of the cigar offers up notes of cocoa beams, coffee, cedar strips, and barnyard. The cold draw is similar, delivering the same notes but with some added finely ground black pepper.

After toasting the foot with a match and taking the first few puffs, La Herencia Cubana CORE kicks off with rich, medium bodied smoke. It is very much an AJ blend. It’s got leather, dark chocolate, some dry wood, and some sweet and tangy spices that activate the tip of the tongue. Strength and body are both at medium in the beginning. The retrohale is my favorite part of the experience early o. I find the flavors on the palate good, but too straightforward. The retrohale on the other hand is packed with complexity and most importantly, balance. Just the right amount of spice, with sweet chocolate and a salted popcorn note that pops nicely (no pun intended).

From a construction standpoint, the cigar has a great draw, and produces plenty of smoke.

At almost two inches into the smoke, almost nothing has changed. Well, if you don’t count the burn becoming more than a little bit off. Flavors haven’t changed much, and the cigar is still primarily sweet, with a dry, woody texture simlar to what I experience in many Padron cigars. It’s very enjoyable, but isn’t doing much to keep the experience interesting.

Finally, after roughly 40 minutes of smoking (and well in to the second third) the flavors begin to change. In the mix now is a thick black pepper that activates the middle of my tongue. The sweetness that was so dominant in the first half of the cigar shifts significantly to be much more bitter. Charred wood and espresso edge the chocolate almost entirely out of the mix. Body is still at medium, but strength has definitely increased. The retrohale is even more aggressive, now with a blast of black pepper that is quite enjoyable.

The final third of the La Herencia Cubana CORE continues the trend, with stronger pepper, charred wood, and some intense black espresso. The aroma on the other hand carries much of the pepper, with some nice cocoa sweetness on top. While not the most complex arrangement of flavors, I it very enjoyable, and a logical conclusion to the story that the cigar is telling.

Now to conclude the review. I wasn’t impressed by the first half of this cigar, but I have to admit that by the end I was won over. Overall, the second half of the La Herencia Cubana CORE does demonstrate thoughtful complexity, and the flavors are almost always in harmony. It doesn’t score big points on construction, but otherwise is a very worthwhile cigar to pursue, particularly if you are a fan of AJ Fernandez’s other blends. This cigar was particularly fun to review because I’ve mostly smoked AJ’s newer stuff, and it’s interesting to see the stylistic parallels between his older and more recent blends.

Brand evangelist, digital marketer, cigar and spirits expert specializing in consumer tasting and educational events. Matthias made the long trek from his hometown of Portland, Oregon to New York City in 2007, and in nine years has hosted more than 120 events and helped promote and launch dozens of cigar and whiskey brands in the U.S. In 2016, he joined the Cigar Journal Tasting Panel, blind-reviewing pre and new release cigars.
« Padron Family Reserve 50 Years Maduro Review» Moore & Bode American Riot Review