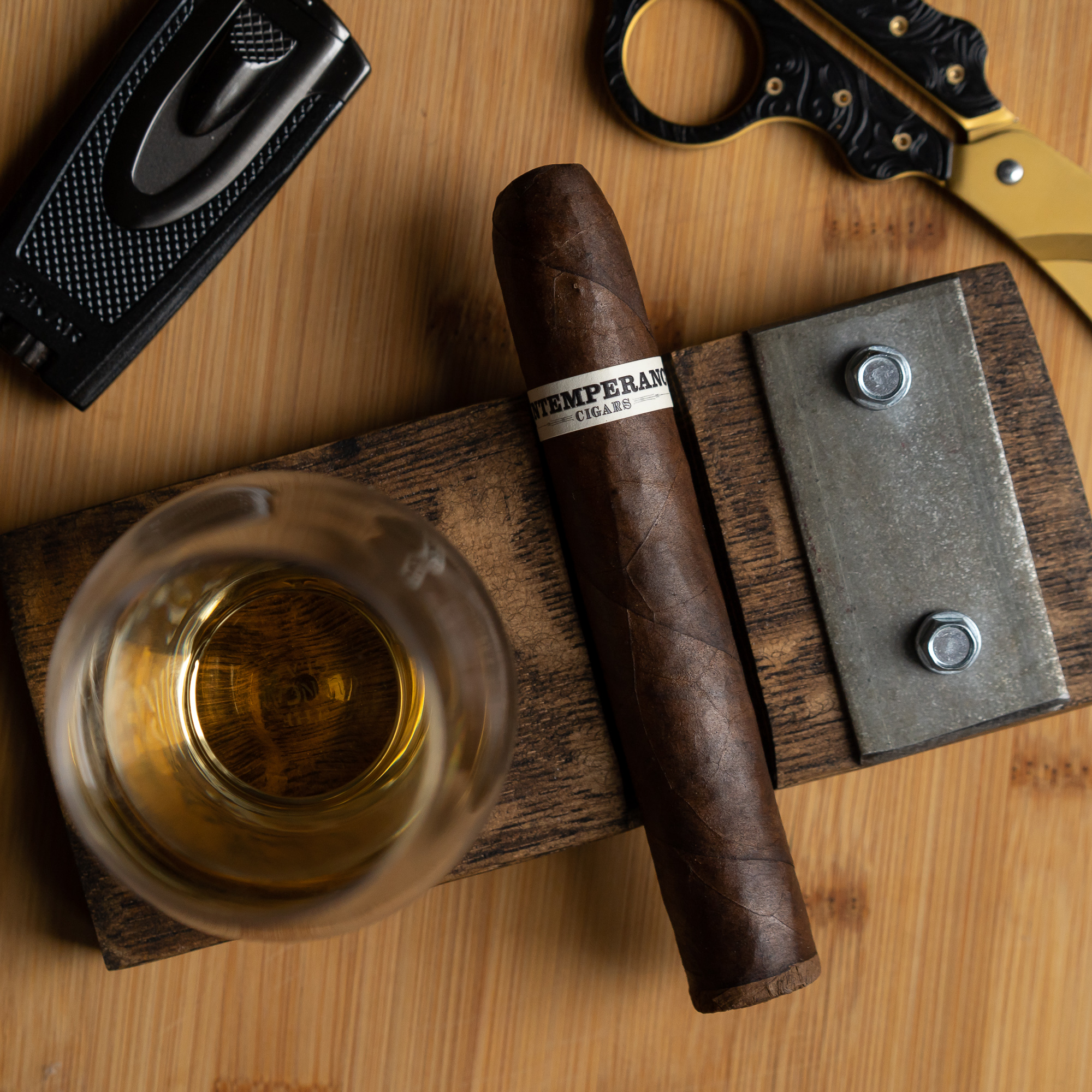 Up for review today is the RoMa Craft Tobac Intemperance BA XXI. I haven’t smoked many cigars from Roma Craft Tobac, but I do have to say that after reviewing this cigar, I will be smoking many more in the future. Read on to learn why. 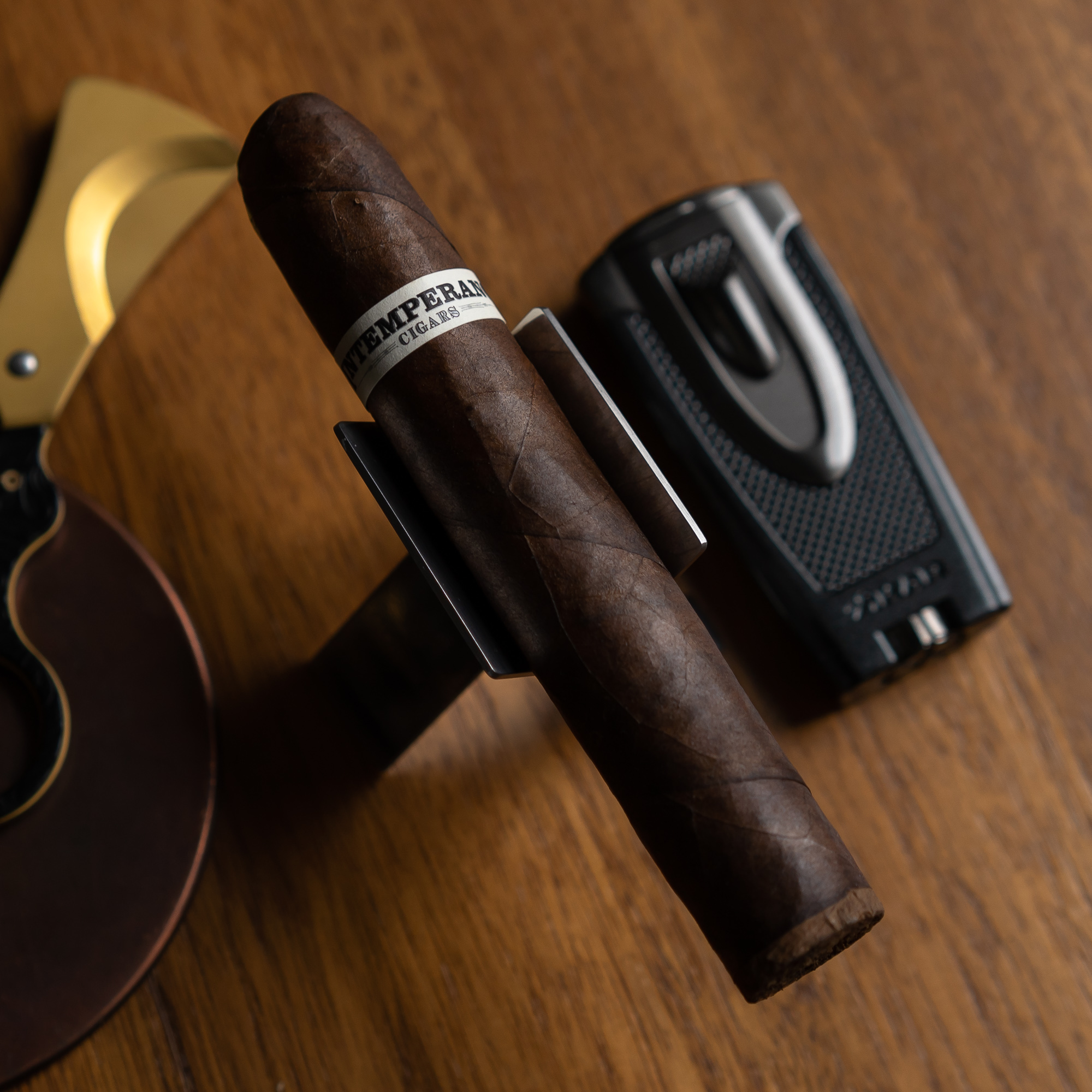 The Intemperance BA XXI is an attractive cigar, with an espresso bean colored Brazilian Arapiraca that has minimal veins. Strangely, the wrapper leaf doesn’t actually extend all the way to the foot of the cigar. I couldn’t tell you why, but William Cooper at Cigar Coop looked into it and found the following:

At the footer of each of the Intemperance BA, it has an exposed binder, and then some exposed filler.  Martin explained there were two reasons for this:  First because Arapiraca wrapper is sensitive to humidity, the wrapper would actually shrink.  They found the best way to work with this wrapper would be to let it age before cutting the foot (thus the shrinkage).  Secondly, by exposing the binder and then the filler, it allows the cigar enthusiast to experience those parts of the blend without the dominant flavor component of the wrapper.

Besides the fascinating construction, the foot of the cigar smells great, with strong aromas of cedar, grilling spices, and earth. The cold draw is very spicy, with balanced, sweet notes of sweet earth and wood. Construction-wise, the draw is mostly free, about a 6/10 in terms of amount of restrictiveness. 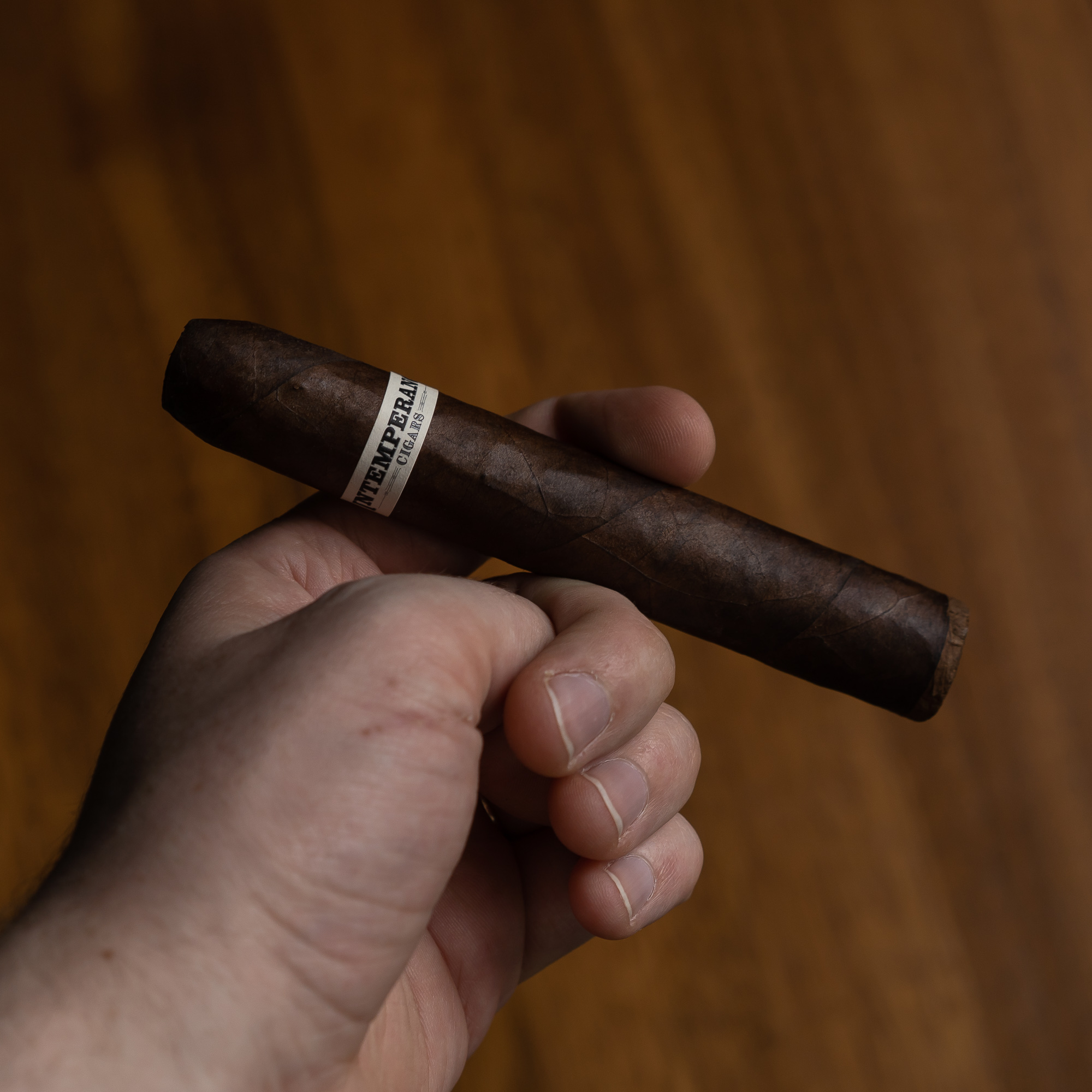 The first few puffs of the Intemperance BA XXI Ambition are noticeably thin on flavor, a direct result of having no combustion of the wrapper leaf. That’s short-lived though. Only two minutes in to the smoke, the wrapper leaf begins to burn and the flavors become much more rich and textured, with creamy fruitiness leading the way (a unique note to be sure) followed by rich cocoa and espresso notes. Every now and again, the smoke becomes a bit toasty, which keeps things interesting. Speaking of interesting, there’s also a surprising salt and spice that hits just the very tip of the tongue and sizzles momentarily, especially when I hold the smoke in my mouth. The cigar performs great on the construction side, with cool smoke, great smoke production, and a razor sharp burn line. As the cigar continues on in the first third, the spicy and toasty elements of the smoke begin to take center stage, upending the predominantly smooth and rich introduction. I’d put body and strength at medium in the first third.

The Intemperance BA XXI continues to shift and evolve all the way through the second third. First shifting to a spicier, drier and more full strength profile with leather, pepper and charred oak, and then minutes later shifting toward silky smooth smoke that highlights salty-sweet notes of popcorn, grilling spices, milk chocolate and concentrated espresso. For the most part the retrohale is mild and unassuming except for a few puffs here and there where a nicely placed dry spice comes through and livens things up. It’s a whirlwind, but a good one. Absolutely no issues with construction either: a great draw and good burn all the way through with the ash falling in inch and a half increments.

In the final third of the Intemperance BA XXI Ambition, the strength and body finally peak just past medium, with a noticeable uptick in dry wood, leather and spice and a diminishing of the smoother espresso and chocolate flavors. It’s a great way to wind the smoke down, not with a whimper but with more of a bang. The only negative that comes up is that the draw, already free near the beginning, opens up even more leading to the smoke overheating in the final inch.

As Halfwheel rightly noted in their review of the Intemperance BA XXI, this cigar relies less on blasts of power and more on finesse. I’ve got to hand it to Skip Martin and the team at RoMa Craft Tobac. They really have proven in this cigar, and in the CroMagnon, that they are capable of blending truly unique and skillful product.

Brand evangelist, digital marketer, cigar and spirits expert specializing in consumer tasting and educational events. Matthias made the long trek from his hometown of Portland, Oregon to New York City in 2007, and in nine years has hosted more than 120 events and helped promote and launch dozens of cigar and whiskey brands in the U.S. In 2016, he joined the Cigar Journal Tasting Panel, blind-reviewing pre and new release cigars.
« Arturo Fuente Hemingway Signature Maduro Review» Bandolero Seleccion Especial “Soberbios S” Review