You’ve never met a friendlier bunch of guys than Jose, Mike, Richie and the rest of the crew at Caballeros Cigars, the sight of the most recent FTNYC event, on November 12th.  I’d never been to Caballeros, and I’m willing to admit I wasn’t too thrilled about the long train ride into Brooklyn.  Long story short: I’d make the ride over and over.  This place is great.

The event began at 8pm.  I arrived a little early, and asked Richie where I could buy a bottle of wine.  He pointed me toward the liquor store a few blocks down and said, “Tell them Richie from the cigar store sent you.  They’ll give you a good price.”  It’s that kind of neighborhood.

I started the night off with a Santa Ana, one of Caballeros signature homemade cigars.  Jose and Mike both showed me around the humidor and helped me pick out the perfect smoke.  Its flavor was in the medium-to-full arena, and it had a rich taste that I loved.  And it was great to hear about the family’s history – that definitely made the experience of smoking my Santa Ana even more satisfying.

Throughout the next few hours, in addition to the FTNYCers who stopped by, it seemed that half the neighborhood showed up to say hello.  People brought booze, and snacks.  A few locals came by with coolers trying to sell us food.  (Sean, how was that empanada?)  Cigars, Rum, Salsa music, even a little dancing – what a fun atmosphere! 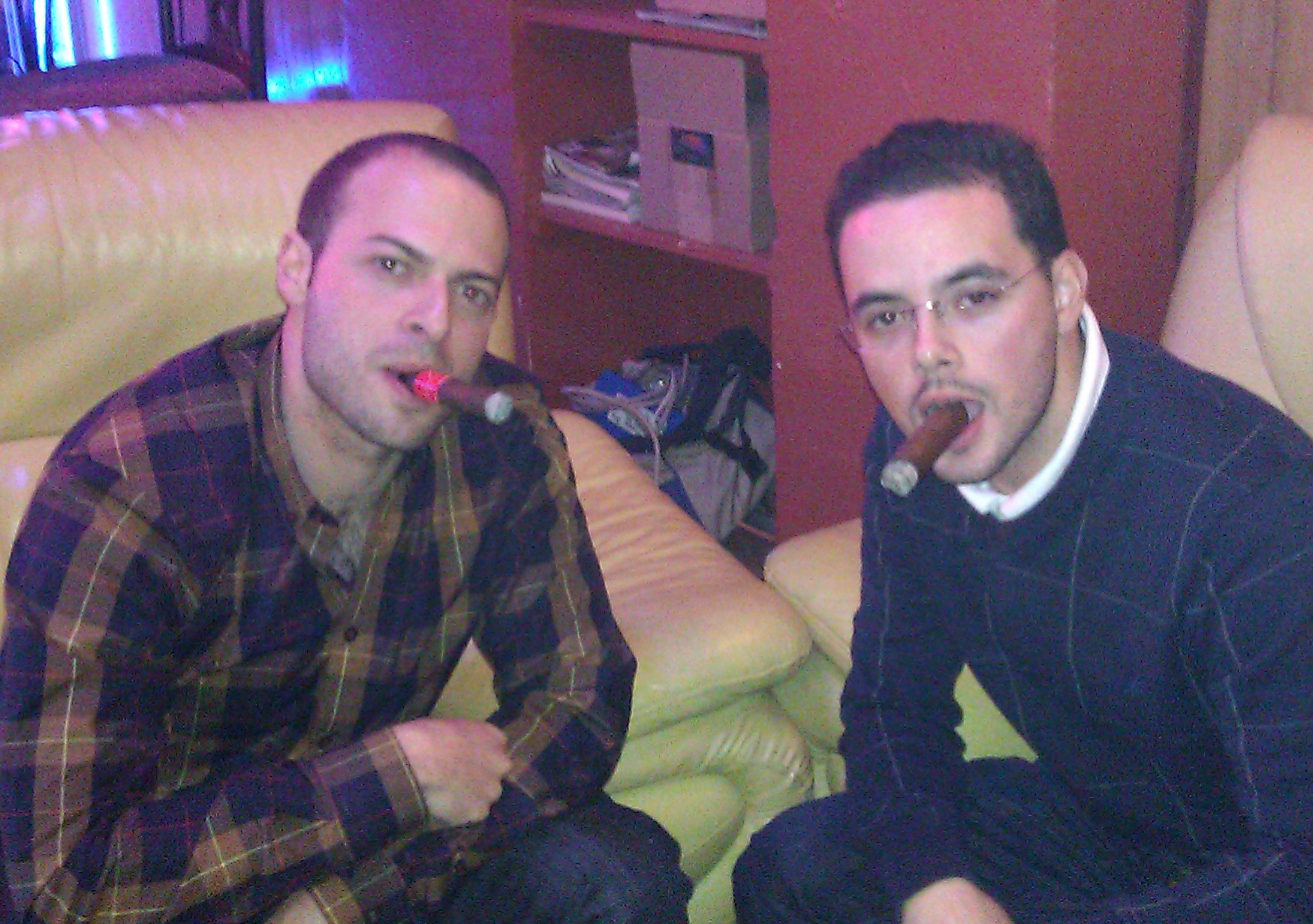 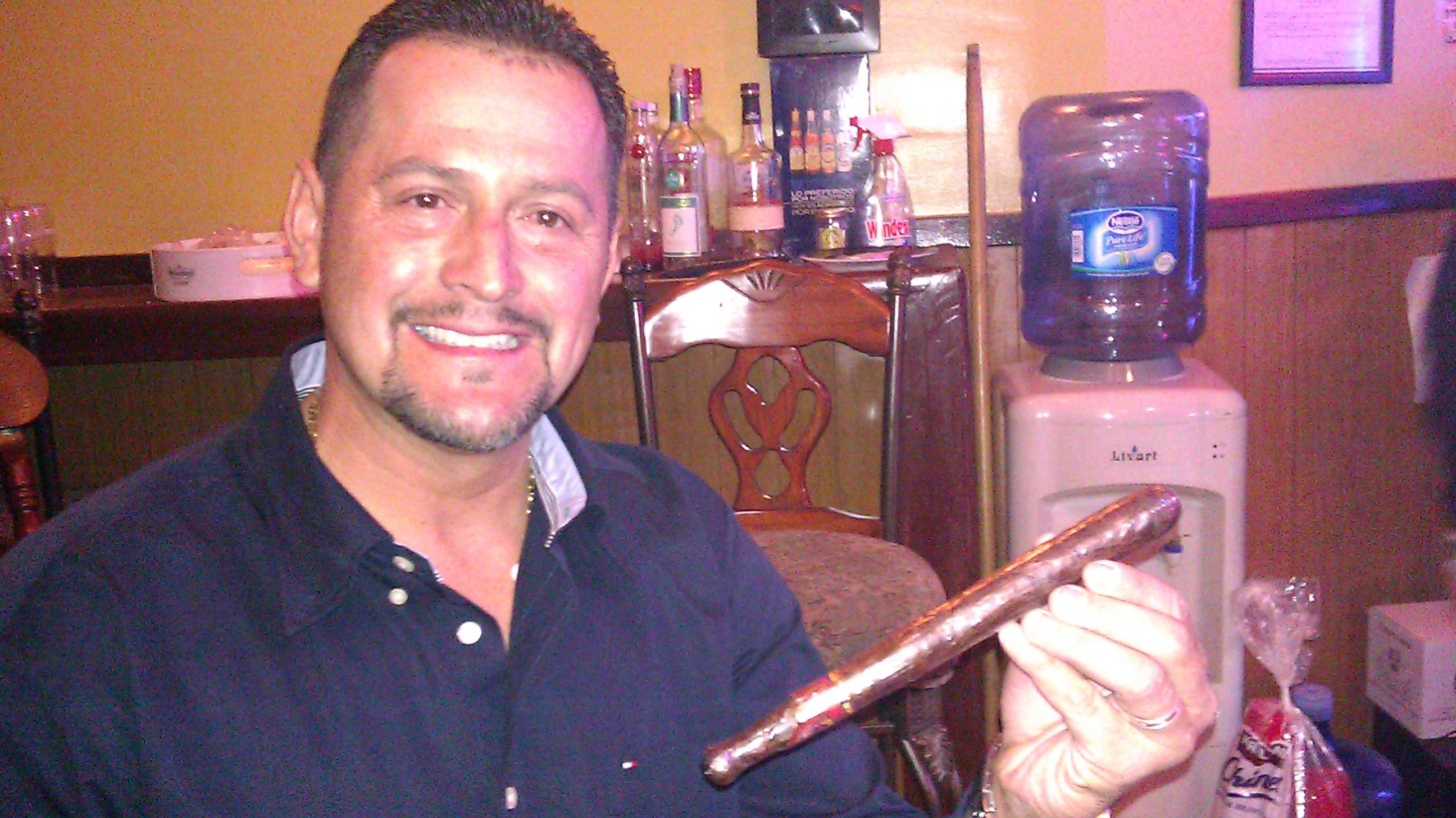 Some of the highlights of the evening include:

•Jose showing us his baseball bat cigars.  What a great idea for having the guys over for a game, or for welcoming a new baby boy.  What’s next?  Football cigars, hockey stick cigars?

•All sorts of strange liquor.  I wish I had been paying attention to the names of things because there were several drinks I’d never seen before.  There was a bottle of pink, carbonated something-or-other that got passed around.  Someone filled a vodka bottle up with special herbs from the Dominican Republic, and made this delicious special brew.  Another bottle had this thick, egg-noggy dessert beverage, with rum, I think.  And beer, wine and brandy.  Everyone was happy to share.

•FTNYer Sarah was mesmerized by Janise, Anthony’s wife, dancing around the store to the beat of the pumping Latin music.

•Mike showing off his brand new tattoo.  I wish I had gotten a picture.  He’d gotten it that day, and pulled down the bandage to show us the arch-angel Michael on his forearm.

By the time I left, 4 hours after arriving, I’d met some new friends, reconnected with a friend I hadn’t seen in a few years, smoked two cigars, and managed to sample about 5 new drinks.  It’s a pretty easy call to say that this 2nd event at Caballeros was a great success.

Caballeros Cigars is located at 1048 Wyckoff Avenue in Ridgewood, NY.  You can contact them at info@caballeroscigars.com

If you’re interested in joining the list, and attending an FTNYC event, drop Matthias an email at matthias.ftnyc@gmail.com