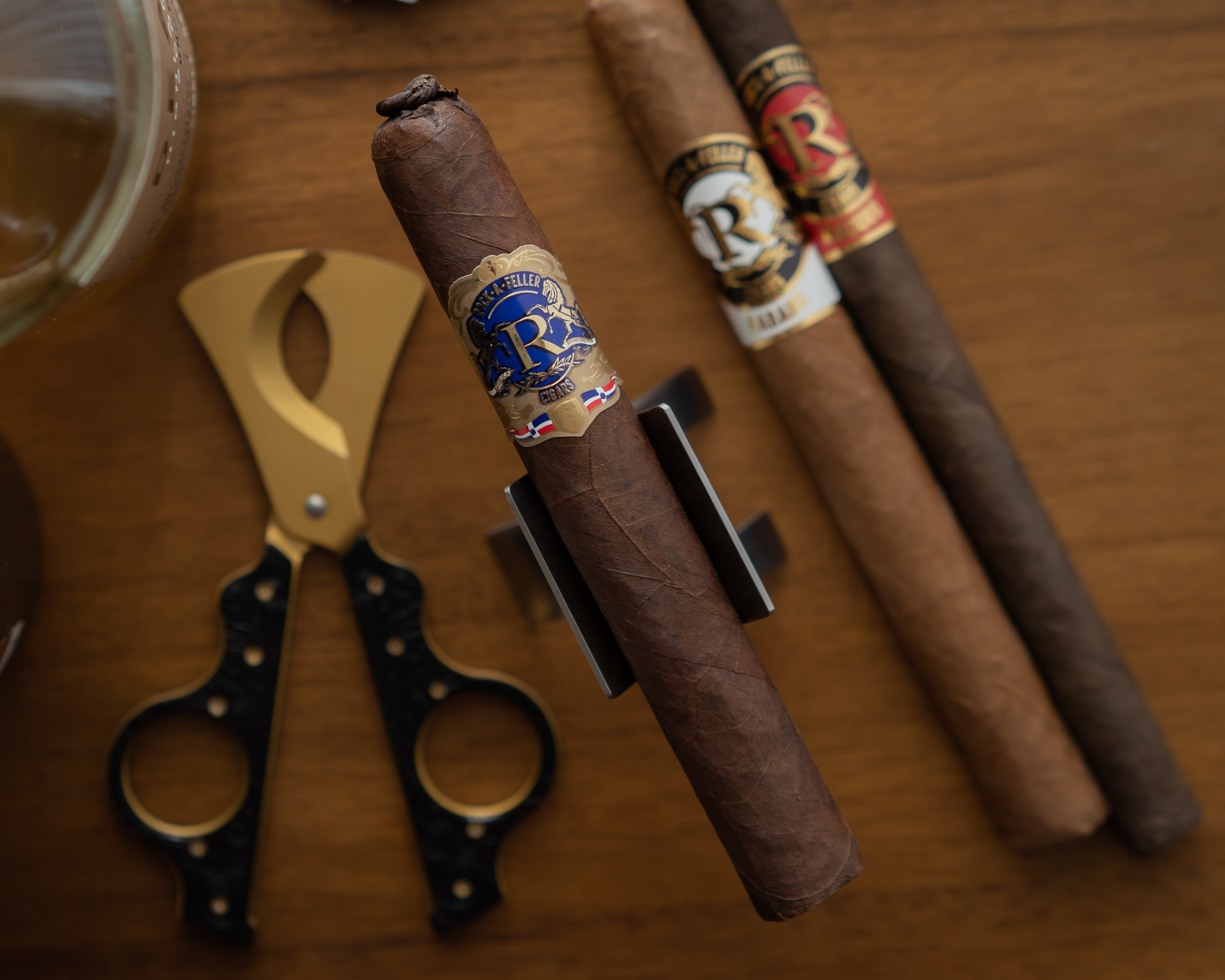 Up for review today is the “Dominican Blue” from Rock-A-Feller Cigars. It isn’t a cigar I can say I know much about, but I can say that I was very surprised when I smoked it. Read on to find out why…

The Rock-a-Feller Dominican Blue is a handsomely presented cigar, with a single gold and blue band with “R” featured dominantly in the center. Another thing I notice is just how long the pig tail is on the cap – it’s easily over an inch when pulled on. Otherwise, the outer Ecuadorian wrapper is dark brown and has a visible layer of oil. The cigar is slightly springy when squeezed, and has the same amount of give its entire length.

Taking a whiff off of the foot, I pick up sweet aromas of earth and cocoa powder. Clipping the cigar with a straight cut reveals a perfect draw (7/10 in terms of amount of restrictiveness). The flavors from the cold draw include strong cocoa powder, baking spices, earth, and tree bark.

Off the bat, I’ll give the Dominican Blue credit for producing a flavor profile unlike anything I’ve experienced before. The smoke is very light, almost tea like, and the texture is silky smooth. Flavor wise, I pick up a combination of hot cocoa powder, dusty paper, peanuts with just a hint of spice and a tart note activating the palate. The retrohale is similarly light, with notes of baking spices and potato chip. Smoke production is excellent, and I think the Dominican Blue is off to a great start.

The ash is still holding as the cigar hits the end of the first inch and a half. The smoke that the Dominican Blue produces remains remarkably smooth, and the spiciness builds on the palate and the retrohale. At the same time, a bitter charred wood note enters in, giving some nice complexity and depth to the profile.  Still, cigar doesn’t break above mild/medium in body or strength, but that is fitting given how delicate the smoke is.

By the final third, the Rock-a-Feller Dominican Blue finally creeps up closer to medium. There are a few moments where the bitter side of the profile dominates a bit too much, but otherwise the profile remains balanced and the smoke cool.

As a mild blend, the Rock-a-Feller Dominican Blue still delivers massively on both flavor and finesse. The profile is remarkably balanced between bitter, sweet, and slightly spicy. And the retrohale is perhaps one of the most enjoyable that I’ve experienced this year.  It’s probably not the best cigar to pair with spirits given how light the smoke is, but it will smoke well any time of the day.

Overall, along the best 2019 releases I’ve smoked this year.