Several weeks ago, while Big Ronnie was making July 4th plans with fellow CRA Ambassador Christian Aliperti, It struck me that I had not visited some of Long Islands most popular Cigar shops. This was a travesty, as Big Ronnie supports ALL who support the premium hand rolled cigar industry. I needed to get out there and meet some of the players on the Island. As my girlfriend, Erica and I planned on spending the week of July 4th with he and his wife Laura, we would take a day to visit and speak with some of Long Island’s most popular shops. Erica also joined the trip as photographer, and did a great job. You will see her eye in the photos below.

As CRA Ambassadors, Christian and I routinely discuss tobacco-related topics at events and herfs. We love getting out there to shake hands with new friends and learn what they like to smoke. For this particular mission, Christian and I were interested in what some local shops were doing to increase awareness and drive business through membership offerings. We visited 3 local shops to ask their teams about membership, events and the general philosophy of owning and operating a Cigar shop in the great state of New York, a formidable challenge today.

Currently, NYS tax on tobacco-related products is 75% (By comparison, tobacco tax in Kansas is 10%). That means if a NY Cigar shop orders $1,000 of product from a vendor (appx. 3-5 boxes of cigars), they already owe $750 to the state at the time of purchase, not sale. So, $1,000 of product costs the shop owner $1,750 before you mark up or sell your first cigar. The current anti-tobacco movement in NYS is trying to raise taxes again, via NYS Gov. Andrew M. Cuomo’s recently proposed “loophole closing“. The plan would eliminate the existing 75% tax on wholesale cigars, and implement a 50% of retail value tax for all retailers and wholesalers. Additionally, a .20 cents tax on all cigars is intended to be implemented. It’s an uphill battle, no doubt.

So here we go, let’s get out there, shake some hands and spread love, the Brooklyn way. 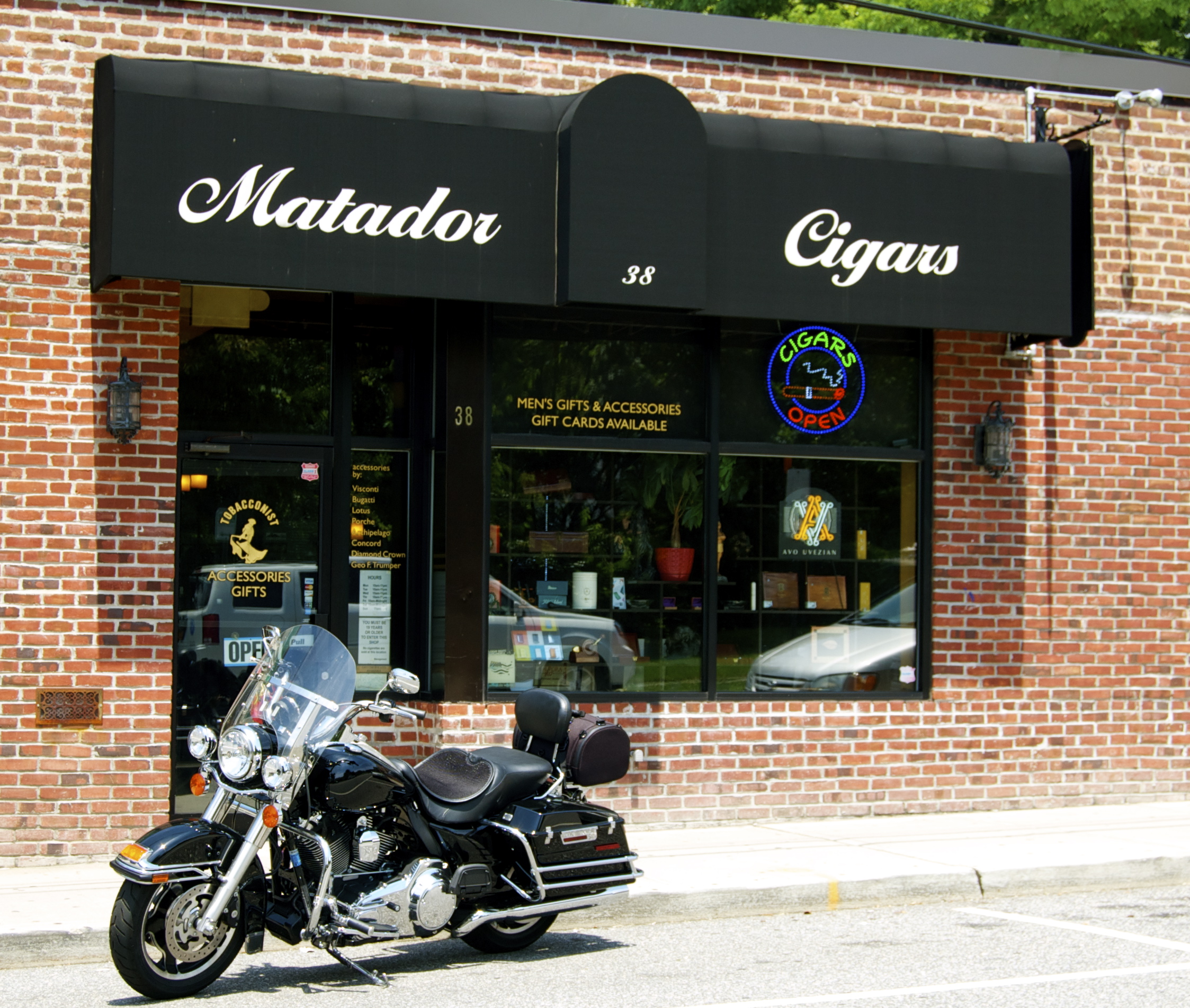 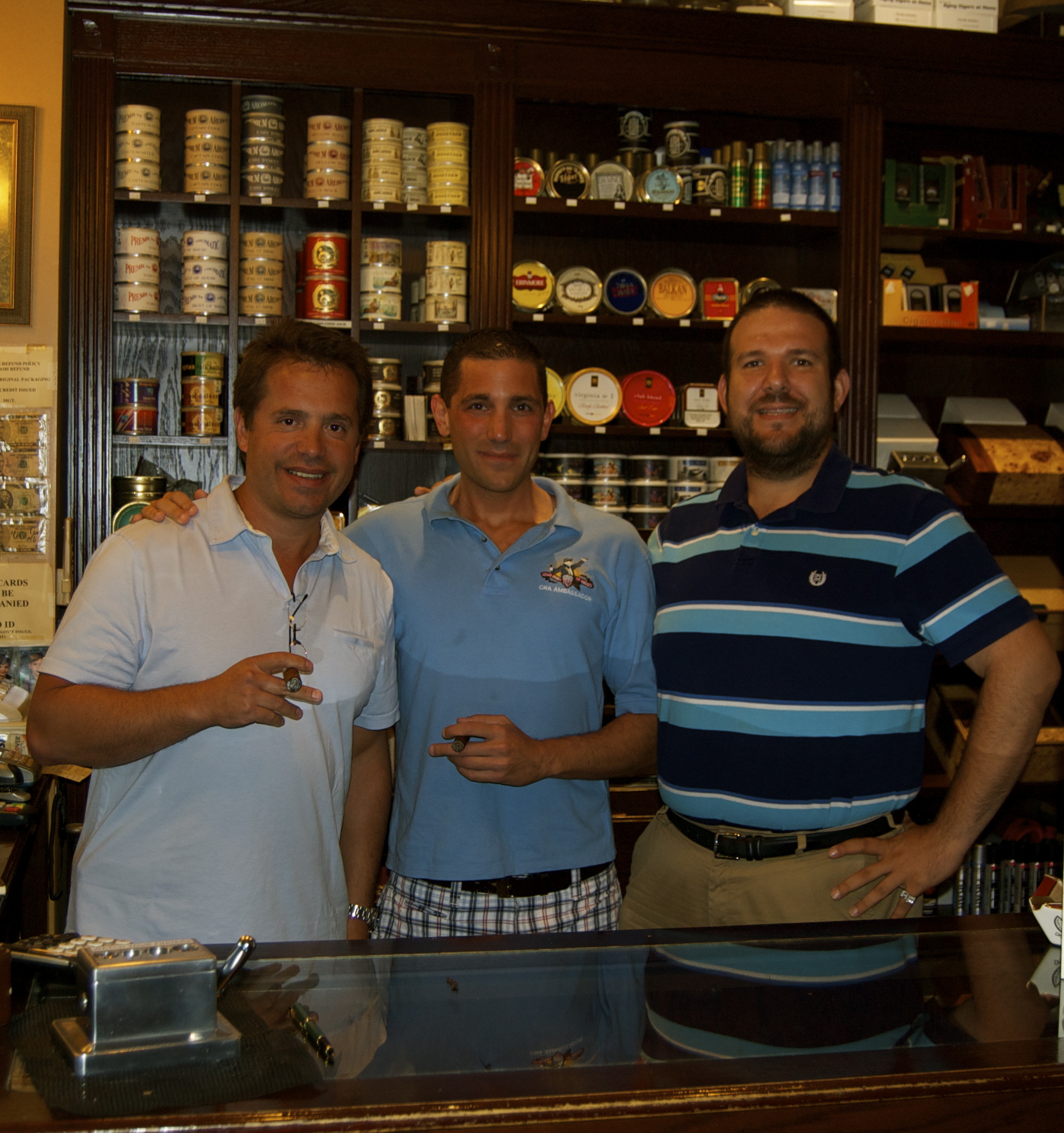 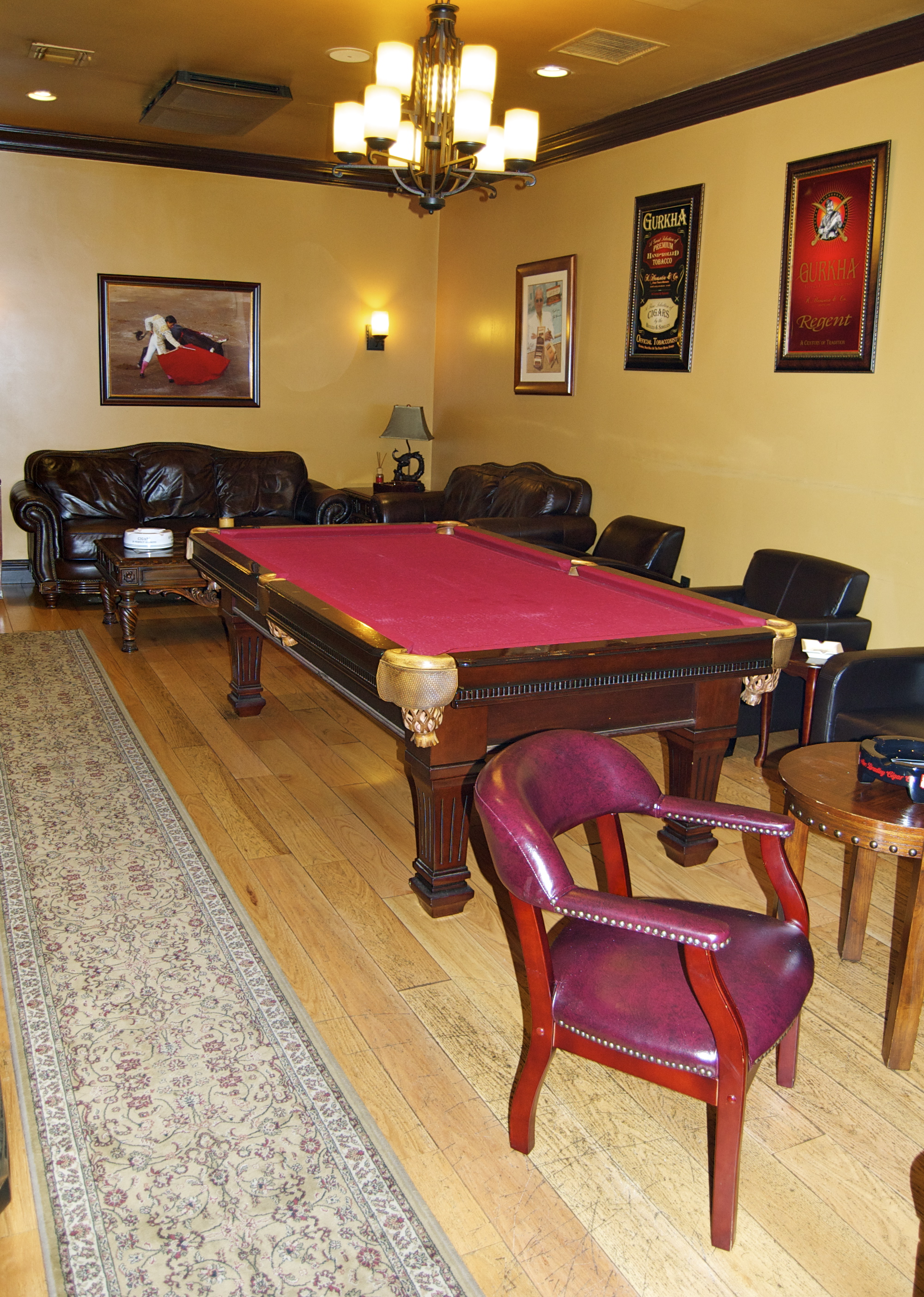 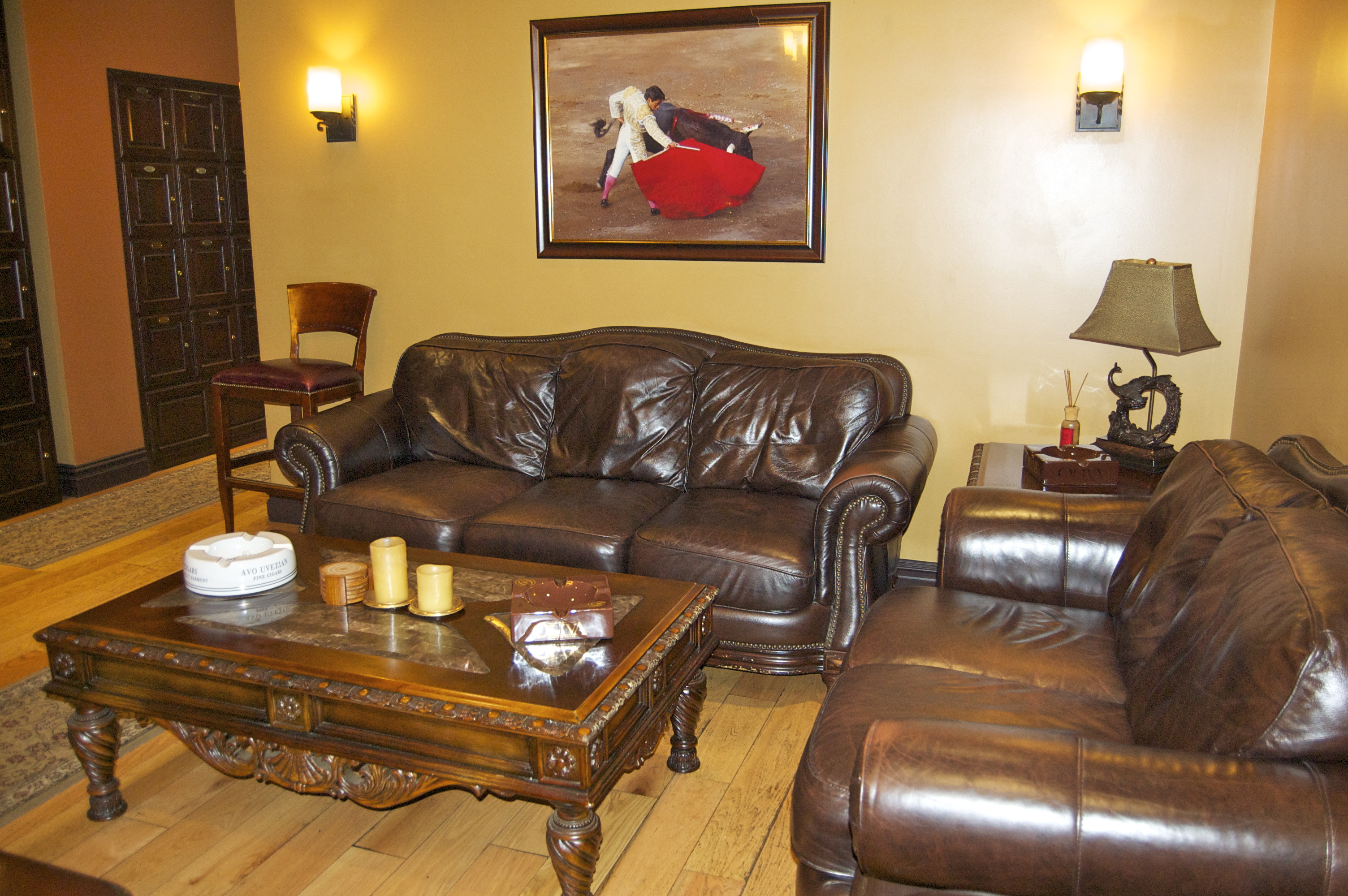 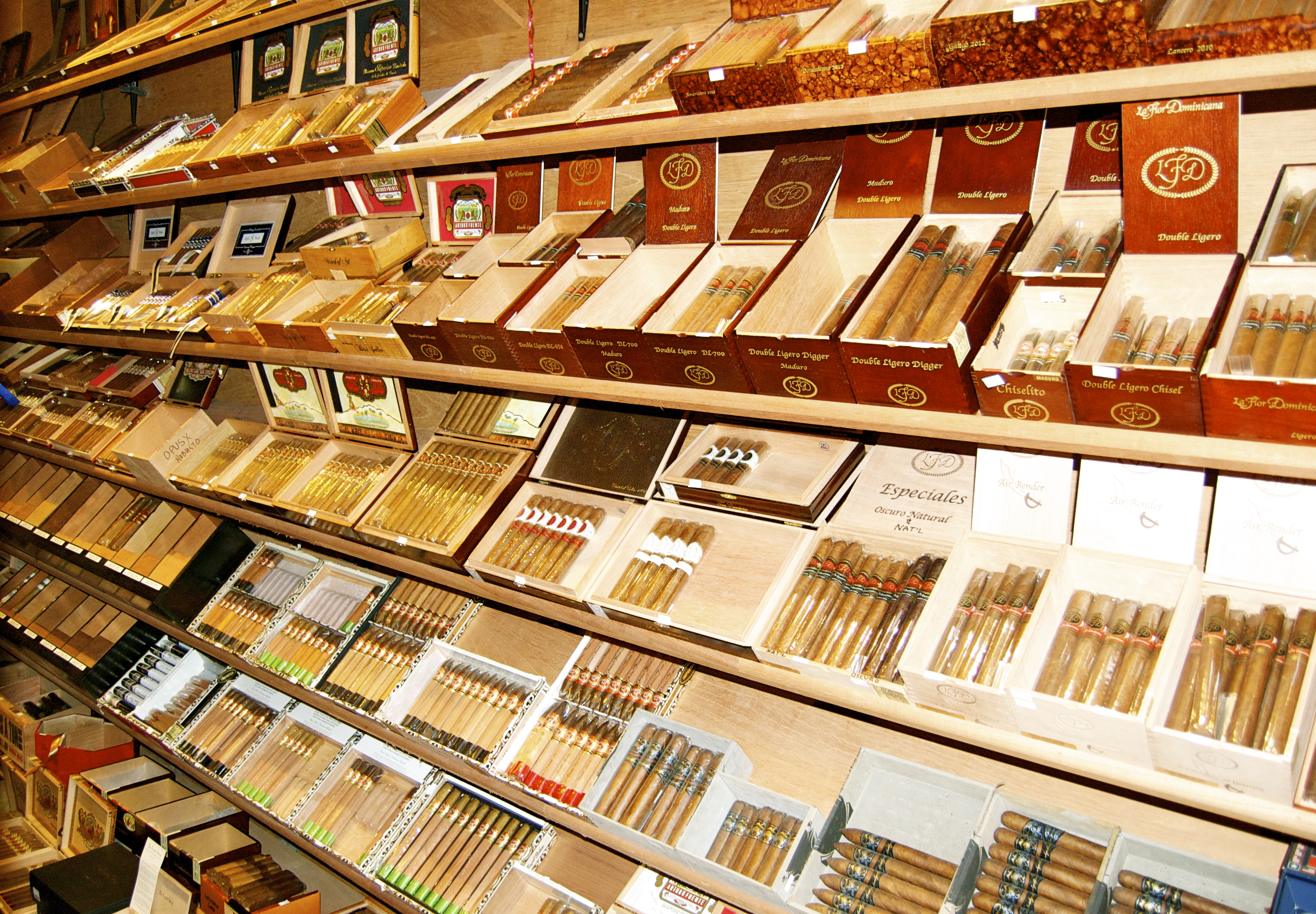 The first stop on our shop tour was Matador Cigars in Roslyn, NY. Chatting with owner, Boris Grossman about the latest blends in the humidor was a treat. Matador has a very large and diverse selection of cigars from all major manufacturers. This is a complete humidor. Now that we’ve seen Matador, I can recommend Boris for both cigar and accessories shopping to those on any budget. The space, selection and focus, are all very impressive. While we were there enjoying a cigar and chatting, a 20-something guy came in and said to Boris, “I’d like a mild cigar”. He immediately took the opportunity to help a new cigar enthusiast learn about what he might like. He took the time to walk the young man through the humidor and chose a stick based on his preferences. I think he earned a customer. With service like that, why wouldn’t he return?

Boris is an Ambassador to the industry in the best sense of the word. Beautifully kept shop, politically active, friendly and very knowledgeable.

Matador offers monthly events, memberships and was driving awareness for the NYTA’s “New York Stogathon” Event. Boris spoke to several walk-in customers about the event while we were there. It was very good to hear him encourage people to spend their hard earned money ensuring their rights to enjoy cigars will be protected.

I smoked a Viaje C-4 and Christian enjoyed an Illusione Ultra while we chatted w/Boris about the industry.

CHRISTIAN’S NOTES – Matador – Illusione Ultra- The Ultra corona starts off with leather, earth and mild spice. Medium smoke which develops midway into coffee and continued leather notes. Last third spice returns and then quickly changes to an earthiness on the finish. I think the corona is the perfect format to represent a blend and the Ultra does not disappoint.

We also snagged a pack of CAO Flavors; Eileen’s Dream. These are a favoritie of Christian’s wife, Laura. While we’re on CAO Flavors, Erica & Laura also love the Kamasutra and Moontrance flavors in this line, but thanks to our overzealous Mayor, they are no longer legal for sale in NYC. A NOTE ON BLOOMBERG – NYC Mayor Michael Bloomberg has reportedly contributed $220M of his own to the Anti-Tobacco movement.

The 4yo shop offers it’s members 15% off all boxes and 10% off all accessories. The $450/year membership is currently sold out with over a dozen on the waiting list. Not surprising, considering the quality of the shop & owner.

Matador’s beautiful pipe selection is in part, due to Manager Frank Cervone, who managed the 42nd St. Barclay Rex shop for over 20 years. I am not a pipe smoker currently, but will be adding pipes to my repertoire. SIDE NOTE: I’m quite looking forward to pretending I’m Sherlock Holmes and annoying my girlfriend with stupid quotes once I start smoking pipes. Haha.

Upon entering this Nassau County shop, we immediately felt at home. There was a nice, mellow crowd of 5 in their front seating area, with staff busy unpacking new cigar shipments. Constant, all-inclusive conversation is the name of the game here. The Tobacco Plaza humidor is an interesting one, with a nice selection of premium hand rolled cigars. In addition to the cigars, there is also an 8 seat, smoking area with 2 televisions. This is the first smoking area I have EVER seen inside a humidor. I was always taught that there is no smoking inside humidors. At my club, The Grand Havana Room, there are signs everywhere asking you not to smoke in the humidor. I will have to think about this some more before I offer an opinion. Different to say the least.

Danny and Christian immediately began speaking about the custom blend cigar made specifically for Tobacco Plaza: The DD, made special for Tobacco Plaza by Pete Johnson of Tatuaje. The DD is offered in 2 varieties, dry pack and wet pack, both pack a punch. Christian and I sampled a DD wet pack and found it to be a full bodied, complex smoke that should not be taken lightly. Before Danny handed it to me, he asked “Have you eaten lunch yet?” I love being warned about the strength of cigars, as I almost inevitably puff harder just to see how hard it kicks. The DD was as strong as advertised and reminded me of a Rocky Patel Edge Maduro. A nice smoke that I will surely enjoy again.

CHRISTIAN’S NOTES – Tobacco Plaza – DD Wet Pack- Having smoked the regular release of the Double D I can tell you the Wet Pack version does not start off with the full flavored punch that the non-Wet Pack did. Interestingly most wet pack cigars I’ve smoked have had a full/rawness to them being relatively fresh. This is NOT to say that this cigar is weak by any means. The initial smokes begins with strong leather, underlying earthiness and I picked up a sweetness as well. Full bodied midway but not with the heft the original release had. This is not a bad thing as the original DD punched you in the face to start. Woody notes mixed with leather continued through this smoke. In the last third the fullness mellowed out with cocoa and sweet tobacco on the finish. I think this cigar needs time to settle as the flavors were not overly complex, however if you have smoked the original you need to check this one out to compare as you will be surprised at the differences.

I love the art on display at TP. Our favorite was a vintage picture of Babe Ruth sitting at a rolling table in Cuba. The walls of TP are filled with pictures from various trips to the Camacho properties in Honduras. Camacho also co-sponsored the custom built-lounge at Tobacco Plaza.

Discussing cigar taxes and politics with co-founder Marshall Holman (who opened the shop in 1972) was amazing. I learned a lot about the history of NYC’s smoking cessation practices over the years. The more I discuss politics and taxes RE: tobacco, the more outlandish I find the Gov’t’s activities to be. I look forward to chatting more with Marshall in the future.

As for membership, their lockers are $300/year. While unofficially, the membership includes the locker only, there are other benefits to patronizing this shop, such as Sunday breakfasts (where members will bring in bagels and coffee) and weekly member gatherings.

When we arrived at Huntington Humidor, we were greeted by HH’s super friendly manager James Thompson. Man, I love this guy. James has been managing HH since 2007 (HH opened in 1995). James spoke about HH’s memeber-oriented events like their annual Skeet/Fishing trips, Mini Golf & Bocce events.

Additional “Members Only” benefits exist also. Take for instance, HH’s “extended access” program. Members can access the lounge during closed hours. That’s a nice benefit for members. HH also offers a $5 cutting fee so that for non-members are encouraged to enjoy the lounge as well.

Also in attendance during our visit was Brad Seidre, an A.J. Fernandez rep, who was there raising awareness about their lines. I was offered and enjoyed a San Lotano Connecticut stick. A nice even cigar that burned well and finished smooth. I would like to try their other lines in the future.

HH has a new custom blend cigar line “Mardi Gras” made by Pride Vintage Tobacco that they are raising awareness for. I am told it will be out by the time of the 2012 IPCPR event.

CHRISTIAN’S NOTES – Huntington Humidor – San Lotano Maduro Corona- The SL maduro started off with a blast of pepper which really gets you on the retrohale. Full on wood flavors dominate with touches of leather. Midway the pepper nearly drops off and wood, earth and espresso notes profile. The last third brought back another blast of spice along with wood and earth to round out its short finish. I enjoy the San Lotano Habano line and the maduro is a nice change of pace.

Overall, we are very happy with the day and how it went. We visited 3 strong Cigar shops that focus on premium hand rolled cigars. On your travels, please take the opportunity to spend some time in these shops talking with their friendly, knowledgeable staff. You won’t be disappointed. Tell them Big Ronnie sent you!