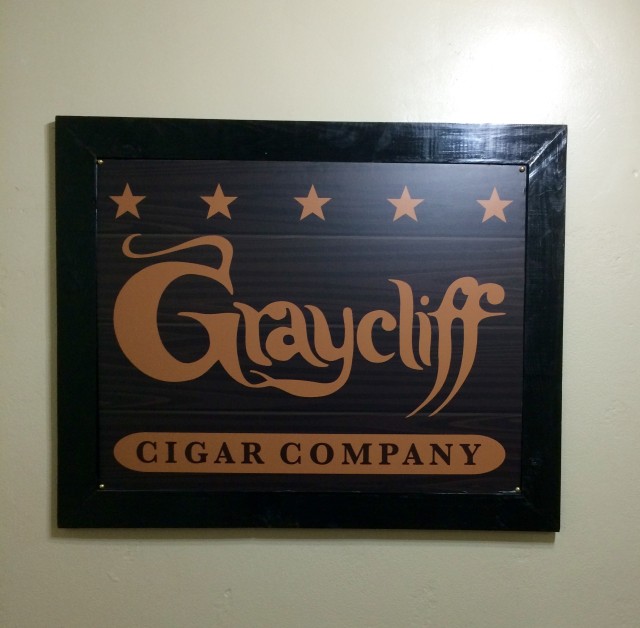 Last month I had the pleasure of taking a day trip to Nassau Bahamas. My one and only plan was to visit the Graycliff Hotel to learn about their cigar making process, techniques and the quality that’s synonymous with the Graycliff brand. Graycliff Hotel was purchased by the Garzaroli family in 1973 and is the premier five star hotel and restaurant on the island as well as housing the largest wine cellar in the Caribbean. The historic mansion and its property boasts  a welcoming reception area, opening air dining and Himalayan salt pool, all of which  cater to the cigar enthusiast.

Upon entering the hotel you can smell the sweet aroma of a cigar in the lounge. With antique leather chairs, showcases of spirits, paintings and a piano you quickly envision a sense of calm and quiet reflection that guests enjoy puffing away on any given day.  Within a few minutes I was greeted by a lovely woman who guided us to the Graycliff Cigar Factory.  I could have easily wiled away the afternoon enjoying cigars and spirits right there however I needed to visit the factory where they make the cigars I’ve enjoyed for the past sixteen years.

As I made my way through the old stone walkway palm trees adorned the property along with statues and an elegant pool that truly gave you a sense of the sophisticated history of the hotel.  Just before I approached the factory I was taken back by the largest Cigar Divan I have ever seen. The Divan had a large ceiling with fans, lounge chairs, couches, wrought iron tables and a free standing humidor.  This is the perfect respite to grab a cigar from the factory and sit with a smoke enjoying the scenery. I’m sure it was no coincidence that the divan is right by the entrance to the cigar factory.

The steps that lead to the Graycliff Cigar Factory: 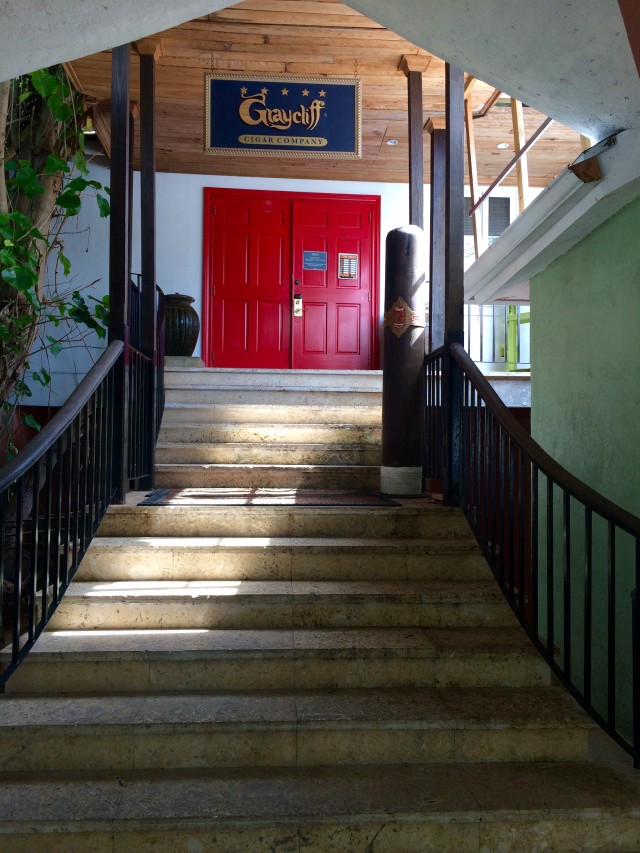 Upon entering the factory there is a lounge and bar offering espresso and spirits. Alongside is a cabinet humidor containing six lines of the Graycliff portfolio. The represented cigars where: Graycliff Originale, Graycliff Professionale, Graycliff Emerald, Graycliff Crystal and Graycliff Espresso. I was met by Adam Collins the General Manager for Graycliff. Adam is a very personable individual who greeted me warmly. As I shook hands I was given a Graycliff Professionale PG and lit it up immediately. The sweet and earthy flavors of the Professionale made it the perfect first smoke of the day. As I entered the epicenter of the factory which is their boutique rolling room I observed several rollers meticulously rolling vitolas for various Graycliff lines. Graycliff prides itself on perfectly rolled cigars and seeing firsthand you appreciate the dedication to the craft. Adam oversees the day to day operations as well as maintains the quality control and works on blends. In speaking with Adam you can see the passion in his eyes and the excitement he gets from working on a blend and speaking about the factory.

One particular roller that caught my eye was a gentleman rolling what appeared to be a free-form cigar or a cigar without a mold. This is extremely difficult to do as keeping a cigar’s measurements and consistency takes a keen eye and skilled hand. The individual in question was Master Roller Miguel A. Lavadie Duconger who is one of the last free form cigar rollers in the world.  As it turns out he was rolling the John Howard Graysmith line which is the ONLY commercial line of cigars dedicated to the free hand cigar rolling style. Miquel makes the cigar using the “Entubado” method which takes the individual filler leaves and rolls them into scroll-like tubes placing them next to each other in the bunch. This method although more time consuming creates more airflow and a better draw and burn making it a more satisfying cigar of very high quality. Watching Mr. Lavadie Duconger work was observing a master at his craft.  I’ve visited cigar factories before, seen rollers at their respective tables and even watched rollers attempt free hand cigars but NOTHING like the quality and consistently I saw at the Graycliff Cigar Factory.

As impressive as the rolling room was Adam took me to the aging room where cigars are stored, bundled and readied for future shipping. Adam oversees fermentation and processing which is a testament to his hands on style of management and adherence to complete quality control. Returning to the rolling room I was able to light up a Graycliff Espresso Pirate which is my personal favorite of the line.  The Espresso pirate yielded rich notes of mocha, leather and a bit of spice.  The cigar was wonderfully balanced in the medium to full bodied range.

As I toured with Adam he took me down a hallway which I would call the “Cigar Education Wing”. Part tobacco education part museum this area sports framed cigar posters such as tobacco leaf classifications in which primings of each leaf are listed, cultivation methods, manufacturing, and the history of cigar making. Walking the hall and reading the informative descriptions gives a cigar enthusiast quite a lesson on how a cigar goes from the field to your hand. This is the first of its kind I’ve seen and shows how the company wants their consumers to understand the process as well as enjoy their cigars.

It was at this point I met up Paolo Garzaroli president of Graycliff Cigar Company. I’ve met Paolo on several occasions and I can say he has a true passion for quality, tremendous vison and is a gentleman who believes in family and building relationships with people.  Paolo directed me to the display cases that showed cigar memorabilia such as presses, molds and cutters. On the adjacent wall there were photos of celebrities enjoying Graycliff cigars and even such luminaries as Nelson Mandela. The impact Graycliff has had on the industry and consumers is demonstrative in these photographs.

Much to my dismay I had to leave all too early as I had a ship to return to. Visiting Graycliff was a priority as well as the highlight of my trip. I thanked Adam and Paolo profusely for the cigars, tour and hospitality. If you visit the Bahamas you NEED to visit Graycliff or do one better and stay on the property. You will be educated, satiated, and puffing away in paradise. I will return as a guest and spend more time at Graycliff which I now call the “Cigar Oasis”.

Christian offers a perspective of cigars ranging from vintage pre-embargo smokes, hard to find cigars as well as current releases. His 22+ years of smoking and love of travel have taken him on cigar journeys here and abroad. From smoking HERF’s in friends backyards to smoking Montecristo No. 2s on the terrace of the Hungarian Palace Hotel in Lido Italy, Christian takes the “everyman” approach to cigar smoking being it all about taste and enjoyment of where you are or who you are with.
« The Nat Sherman Townhouse: A Temple of Tradition» Scenes from Club Macanudo