The Best (and Worst) Websites to Buy Cigars From Online 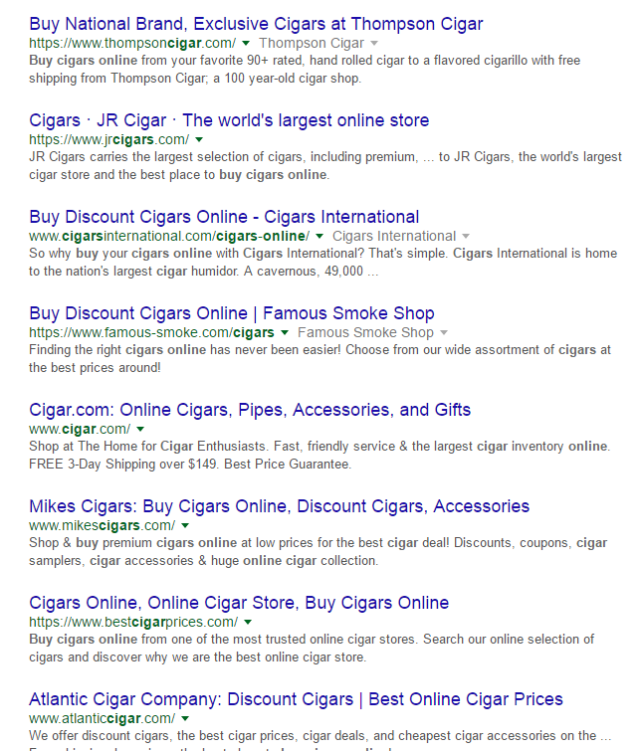 A couple of years ago, I wrote a breakdown of my two favorite cigar websites for great cigar deals. Over the years, it’s been one of my most popular posts, so I want to expand on the topic.

In the last few years, a number of newcomers to the online cigar market have emerged, including Cigar Federation, Atlantic Cigar, and more. And of course, you’ve got all of your traditional online retailers like Thompson Cigar, JR Cigar, and Cigars International, which for me are generally a snoozefest, offering samplers that sound great but are ultimately disappointing.

But I know what you’re thinking: “Matthias, hurry up and tell me where to buy cigars online!”

I will. But before I get to my updated list of best places to buy cigars online, something to keep in mind. Price is not the only factor I consider in this list. I’m looking price, selection, online experience, and also what a website brings to the table that is new and fresh.

So without further ado…

I’m a big fan of Famous Smoke Shop. Not just because their website is easy to navigate or because they have great customer service. They have a great selection and, after ordering dozens of times through them, I find all of my cigars are shipped with packaging that preserves the integrity of the cigars. If you are looking to buy cigars for friends, loved ones, or even yourself, start there. Famous also have an innovative take on the “deal a day” fad that happened back in the early 2000’s. Yep, I’m talking about cigarmonster.com, still one of my favorites to buy cigars from.

If you want the best deals on cigarmonster.com, don’t refresh your browser once an hour. Instead, log in every Friday for the Mega Monster Mashup where they feature all of the deals that they ran earlier in the week.

That’s right, it made the top of my list once again. Why? A few reasons. First, I’ve ordered many a box of cigars on this website, and I’ve never had any problems with availability, shipping, or cigars being mysteriously substituted for other cigars because “we didn’t have it in stock.” *cough* Thompson Cigars *cough*

Second, I’ve gotten some flat out amazing deals on this website. A few months ago, I ordered a pack of 10 Room 101 Uncle Lee cigars, which I think exemplifies the dried cedar/leather flavor profile better than almost any cigar I’ve smoked. The price? Less than $40 for the box.

So price is one thing. Third, though, this website focuses mostly on packs/boxes of cigars, not samplers. That means you do a lot less wading through crap deals and can focus more on finding awesome lots to bid on. If you find you want a different spin on cigar auctioning, you can also check out Cigar Auctioneer, which offers a similar service.

Although this website doesn’t get many points in the web design / user experience category, it does get some big points for the sheer breadth of cigar companies that it features, including many great boutiques.  Take a look at the Smoke Inn Microblend Series, which is basically a sampler of some of the best boutique releases on the market (ok, ok, some of them aren’t strictly “boutique” companies in the traditional sense, but they aren’t General Cigar co’s either).

The Worst Websites to Buy Cigars

So now that you know my three favorite websites to buy cigars on, here are some scammy cigar websites to avoid.

That’s right folks, one of the world’s largest online cigar retailers is getting dropped on my shit list.  Why? Because if you place an order with them, you could expect a call from a pushy sales rep trying to get you to sign up for some ridiculous cigar of the month club. No biggie though, right? Just say no!

Except even when customers say no, Thompson still signs them up. Read here and here. Unfortunately, Thompson Cigars seems to be a sad example of a company getting too big and sacrificing its integrity to maintain sales targets set by higher-ups.

Thompson isn’t the only company involved in these kind of schemes: just the one that’s gotten caught the most often. The take-away here? Be very careful to check with any salesperson on the phone that you aren’t being signed up for any additional services, and check your bank statement at the end of the month to doublecheck. Once you’ve decided a retailer is trustworthy: stick with them!

I’ve never purchased through Solo Cigars, but I’ve read on countless internet forums now that, not only do they sell fake Cuban cigars, but they’ve also been involved in creating fake accounts on popular cigar forums to try to get people to change their mind about the retailer. Just google their name and look at result 2 – 10. You’ll get the idea. Key point here is: always check the reputation of any cigar retailer you purchase from. Just google their name and add “reviews”.

Disclaimer: affiliate links may be included in this post at no cost to you. As always, all thoughts and opinions are my own!

Brand evangelist, digital marketer, cigar and spirits expert specializing in consumer tasting and educational events. Matthias made the long trek from his hometown of Portland, Oregon to New York City in 2007, and in nine years has hosted more than 120 events and helped promote and launch dozens of cigar and whiskey brands in the U.S. In 2016, he joined the Cigar Journal Tasting Panel, blind-reviewing pre and new release cigars.
« Whiskey Review: Straight Edge American Whiskey» 3 New Cigar Etiquettes for the 21st Century