This is the fifth trip in Jefferson’s sea journeys with their bourbon. For those of you who don’t know Jefferson’s distillery set sail with their bourbon in a Jacques Cousteau-esque fashion. Their maiden voyage began five years ago with the idea of storing already aged bourbon in barrels and heading off to sea on a six month excursion. The exposure to extreme temperatures, pressure and the salty sea air would give the bourbon an unrivaled taste like never before. Lest anyone think this to be a gimmick or publicity stunt Jefferson’s is an established producer who spent a lot of time and care in this process.  Their fifth installment delivers a complex flavor profile of an already well aged bourbon. Enjoy! 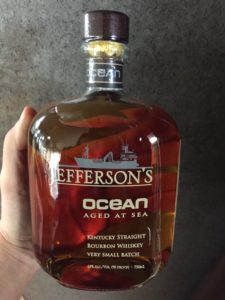 The nose exudes caramel, toffee, raisin and dark plum. The caramel is the predominant

characteristic with the dark fruit in the background.

Upfront the spice and caramel hit you straight away. The mouthfeel is delicate and a creamier style approaches you mid palate. Returning is the rye spice with some tobacco and vanilla followed by a little brine that culminates into a lip smacking caramel finish. A complex bourbon indeed.

All hands on deck with this bourbon as Jefferson’s Ocean needs to be experienced by many. The complexity of this bourbon is no doubt in part to its 8 years of age followed by sloshing around in barrel for 6 months at sea. The varied temperatures and sea air has breathed new life into this bourbon that no land lubber has experienced before. I know a lot of places have sold out of their allocations but I suggest calling your local shop to see if there is anything left. There’s no need to resort to Piracy if you can’t find any as I know Westhampton Fine Wine has a bottle or two still available and they ship world wide. Ahoy!

Christian offers a perspective of cigars ranging from vintage pre-embargo smokes, hard to find cigars as well as current releases. His 22+ years of smoking and love of travel have taken him on cigar journeys here and abroad. From smoking HERF’s in friends backyards to smoking Montecristo No. 2s on the terrace of the Hungarian Palace Hotel in Lido Italy, Christian takes the “everyman” approach to cigar smoking being it all about taste and enjoyment of where you are or who you are with.
« Davidoff Yamasa Petit Churchill Review» Davidoff Brookfield Place: Downtown’s Newest Oasis