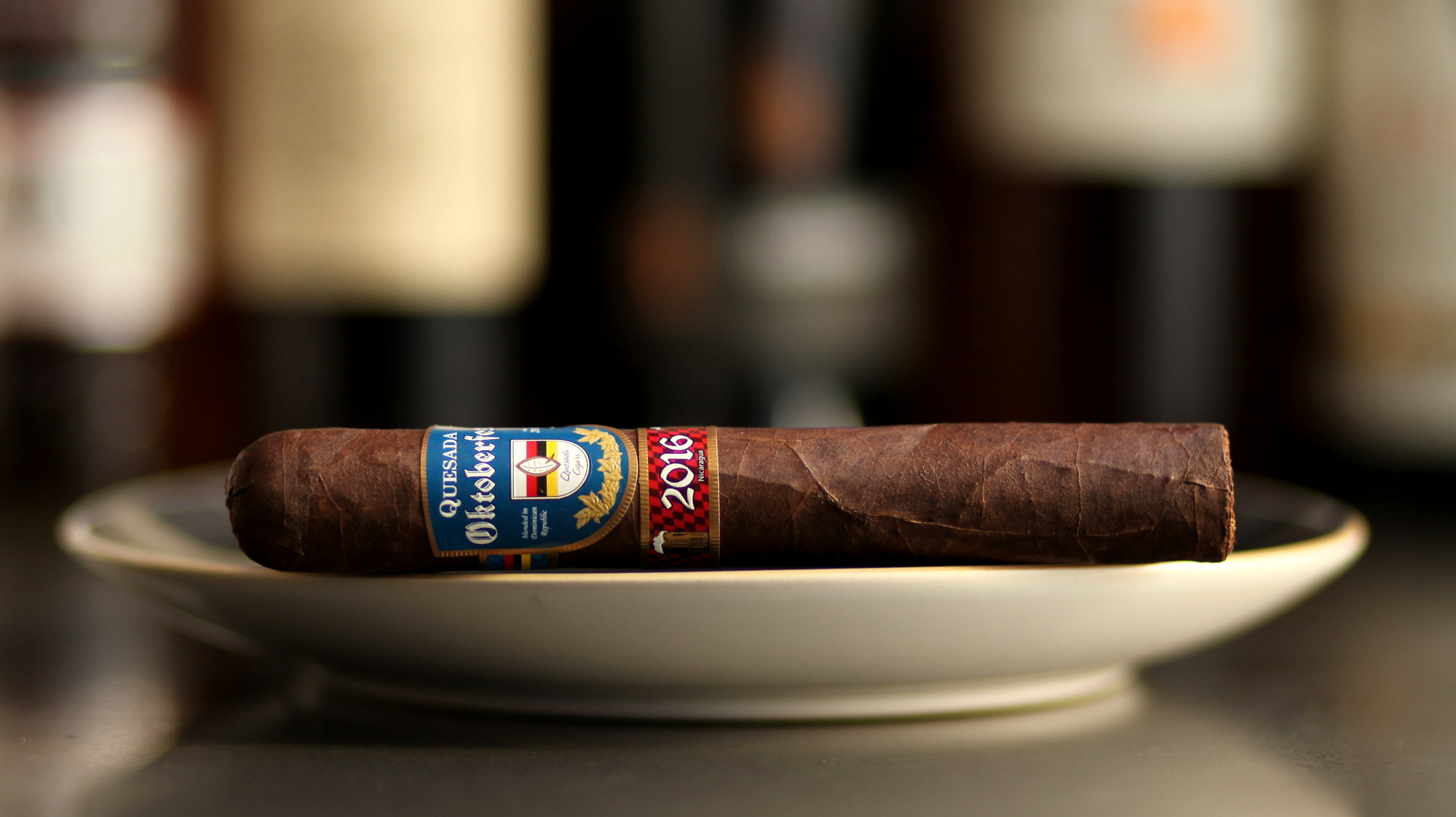 In my personal experience, specially-themed cigars have a tendency to be either amazing or abysmal, with few (if any) in-betweens. The Oktoberfest thus far has consistently made its way into the former category (I distinctly remember enjoying the Über vitola with a hard cider in October of 2015). I know it’s December of 2017, but let’s dive into the Oktoberfest 2016 Triple Bock! 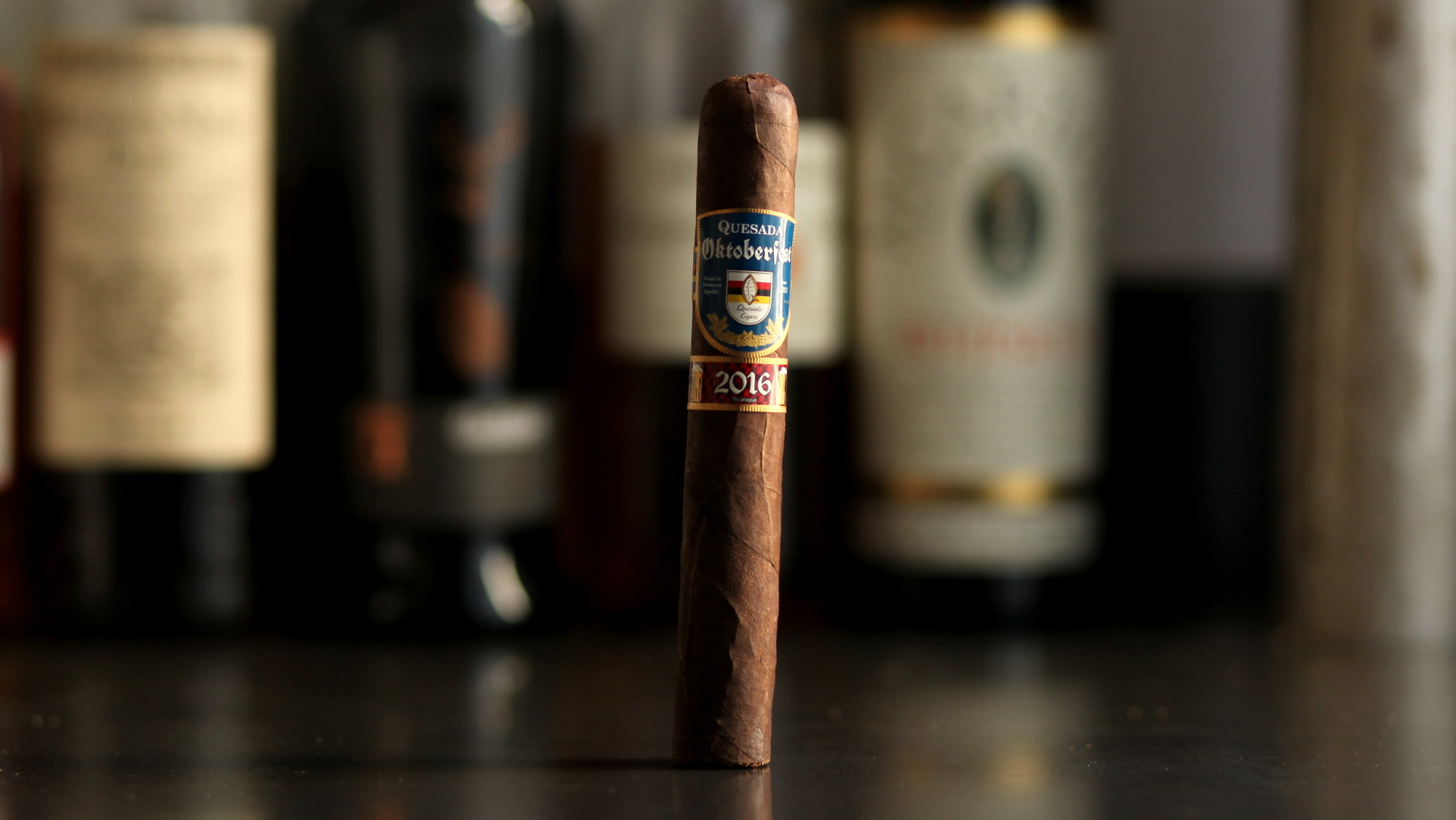 This is quite a fancy looking cigar; the Germanic label design is a particularly great compliment to the body, which is more than a bit gritty, but also well-constructed (no seams on the wrapper, and very few veins). The body is unusually stiff, indicating that the cigar is stuffed to the brim with tobacco, to the point of inflexible stiffness. This fact is also partially evidenced by how the binder filler seem to extend outwards from the wrapper. The ’16 Oktoberfest sports an unusual cold odor; it reminds the senses (not surprisingly) of beer. I’m a bit concerned that there will hardly be a draw at this point, but I’m also keen to taste a cigar that has a quasi-beer cold odor…

I’m pleased and relieved to find that my initial concerns about the draw were ultimately overstated. The draw has a medium-grade strength toit, allowing me to experience an excellently-textured, strong and meaty flavor complimented by undertones of spice and pepper. The burn is also consistent in its evenness; very rarely do I find myself consciously paying attention to it, which is always a good sign. 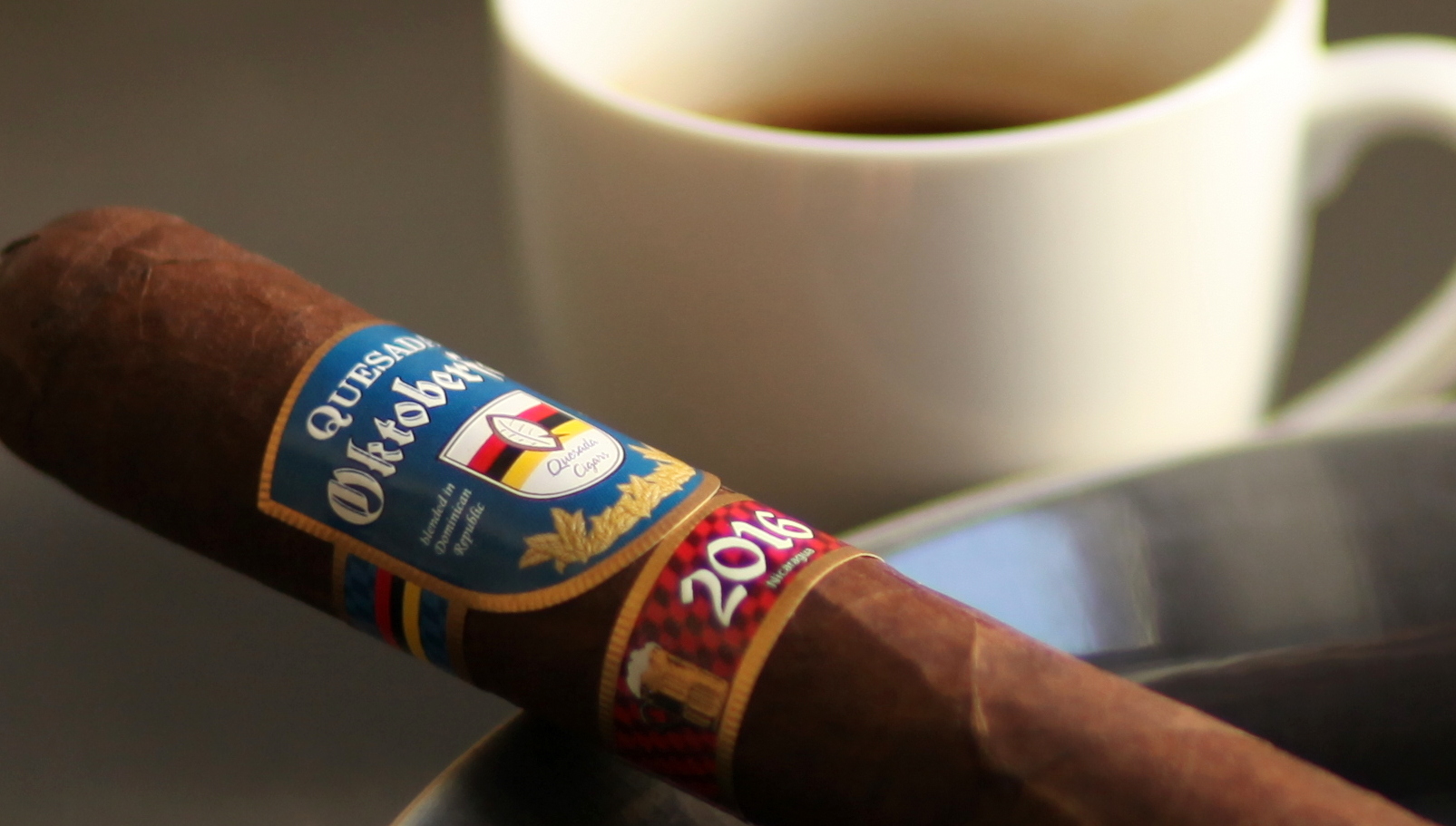 Around the second third, the pepper in the background finds its way to the retrohale as well, making it more zesty, but not always in the most constructive way, given how harsh pepper can be. Not long after, the foreground’s flavor incrementally becomes more mild, going from spicy and peppery meat to salty bread (essentially a pretzel, fittingly enough). It’s not always preferable to have a cigar’s flavor become mild at this stage, but the transition is seamless and the flavor still works well. It’s also at this transition point that the undertone becomes more chocolatey, which balances the flavor profile with the foreground’s salt remarkably well.

The Point of Convergence is where I realize that the Oktoberfest has a slow burn that can keep it lit and undisturbed for over five minutes at a time. After refilling the water glass and various other chores and distractions, I find myself picking up exactly where I left off without need for maintenance. I find the salty bread of the foreground merging with the chocolate undertones to mature into a handsome and rich dark wood, with the occasional touch of BBQ and a spicy/peppery retrohale reminiscent of the first third’s foreground. This flavor profile continues up unto the nub of the cigar, many minutes later.

Given my previously stated suspicion, I was particularly surprised at how well the ’16 Oktoberfest turned out to be. From the meaty beginning to the pretzel-esque middle to the dark wood-infused ending, this season release proved itself quite viable, versatile, and enjoyable in its flavor profile, if somewhat unrefined. The construction is also quite laudable. It’s not every day you find a stogie that can consistently burn evenly, maintain a consistent and medium-strength draw, and stay lit for over 5 minutes, all at the same time. This stogie is definitely a winner overall.

Charlie Freeman was born in Atlanta, Georgia; his mother is from Greenwich Village and is one-quarter Spanish Cuban. Thus tobacco and New York City were in his blood from the beginning, despite his refusals to indulge in either of them in his earlier years. He was first exposed to cigar culture after moving to New York in 2011. He has been advocating the art of fine tobacco smoking ever since, and he currently works at Ash Fine Cigars in Hoboken, NJ. In addition to his interest in tobacco, Charlie is a semi-fluent spanish speaker, an amateur swing dancer and musician, specializing in guitar, vocals and keyboards.
« Alec Bradley Prensado Lost Art Review» My Father S Special Review