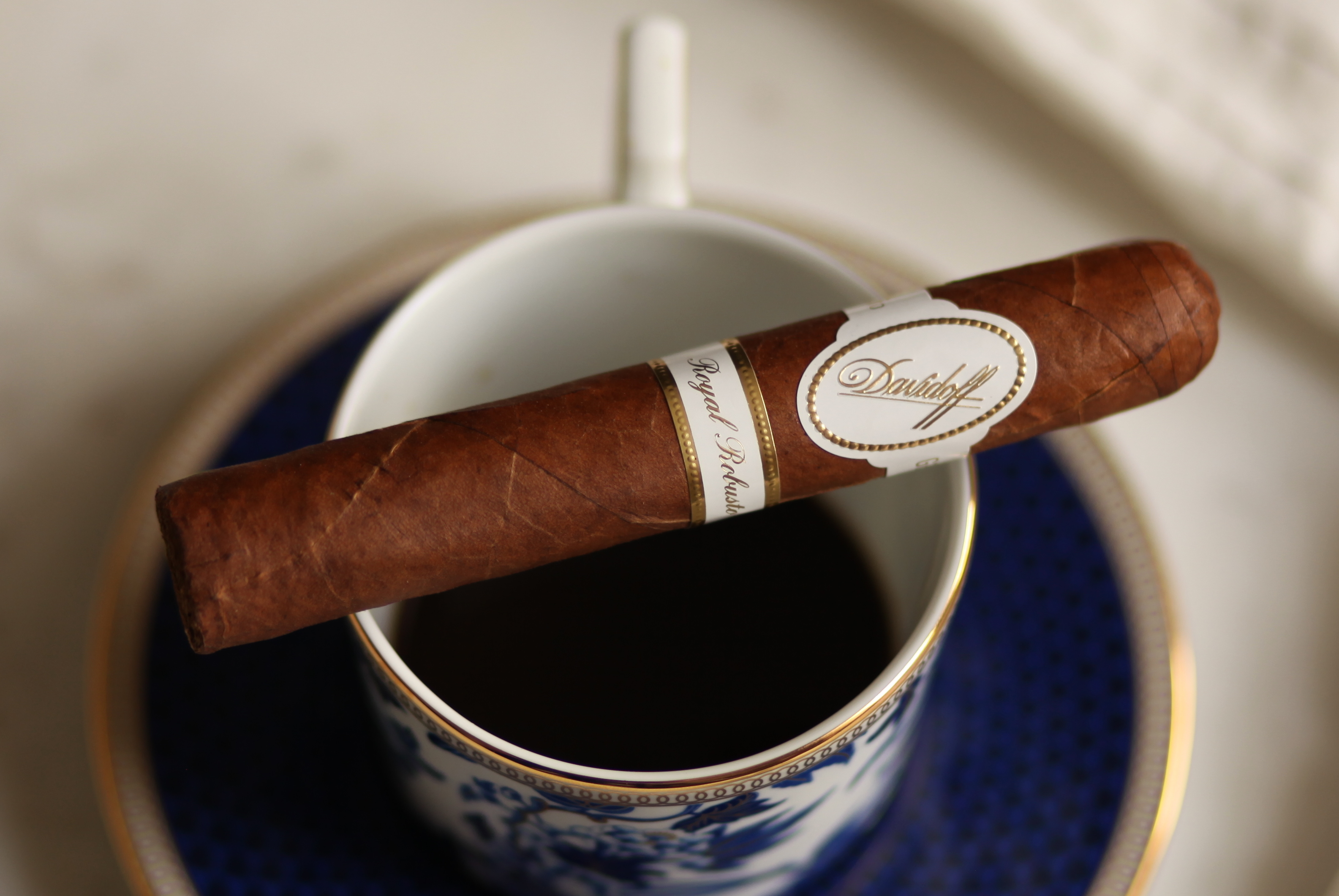 A few weeks ago I was in Palm Springs, California on business at the JW Marriott. It’s a special resort, with breathtaking views of the Santa Rosa and San Jacinto Mountains, an incredible golf course, and if that isn’t enough, a handful tropical birds that inhabit the massive hotel lobby. So it was clear to me that I needed to pack a few special cigars. One of those is the Davidoff Royal Robusto, which I had wanted to smoke on just such an occasion.

At $40 per cigar, the Royal Robusto is an investment. But is it worth it? Let’s find out. 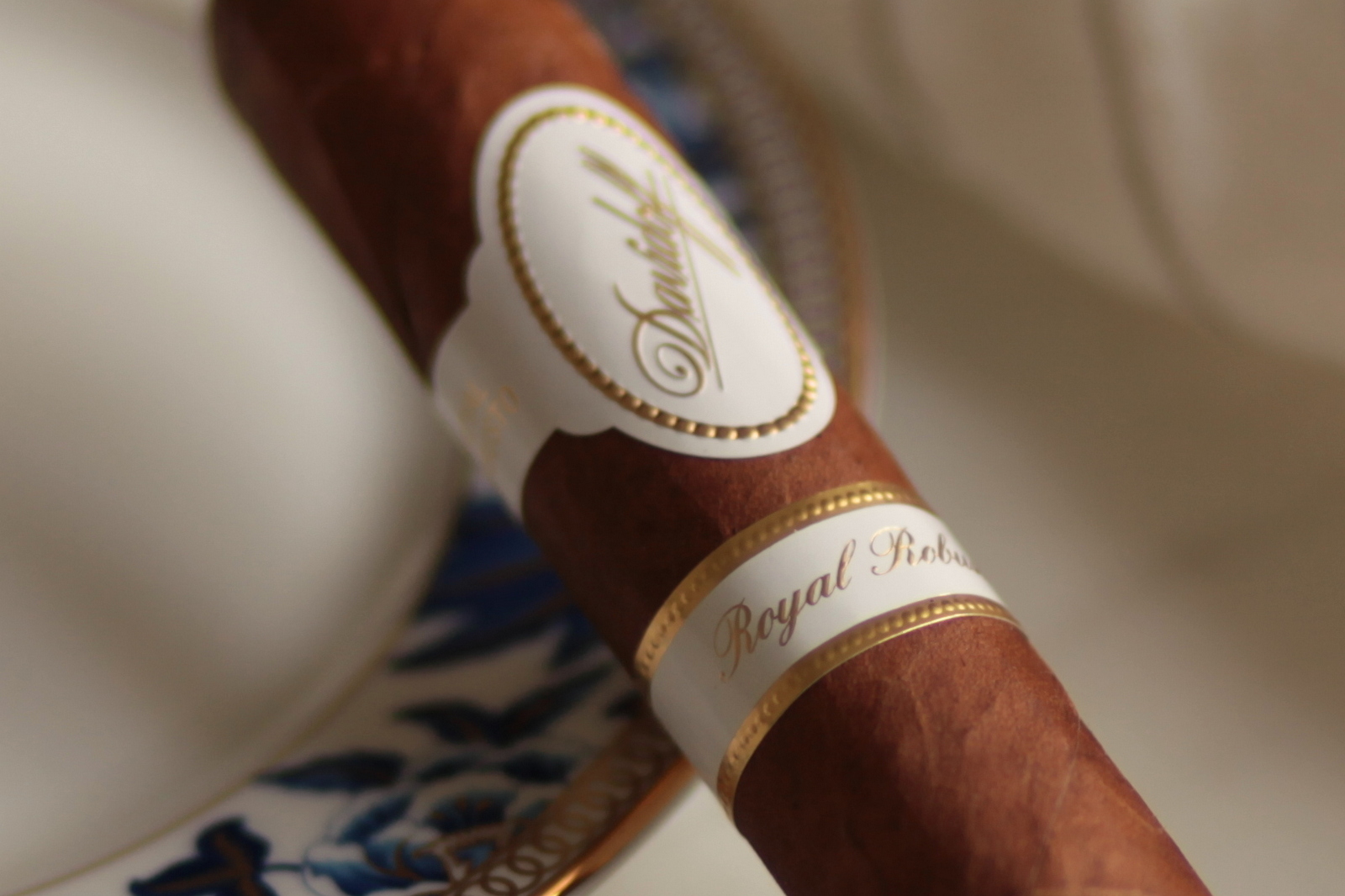 The Davidoff Royal Robusto’s outer wrapper is golden brown with a few visible veins. The cigar is springy when squeezed and is packed consistently the length of the cigar. The cigar features a double band (white and gold), with Royal italicized.

The draw is a comfortable, with only a little restrictiveness. The pre-light draw reveals earth, nuts, spices, and wood. The aroma off of the foot is a different story: it’s very strong, with cedar, coffee, savory saltiness, spice, and floral notes. 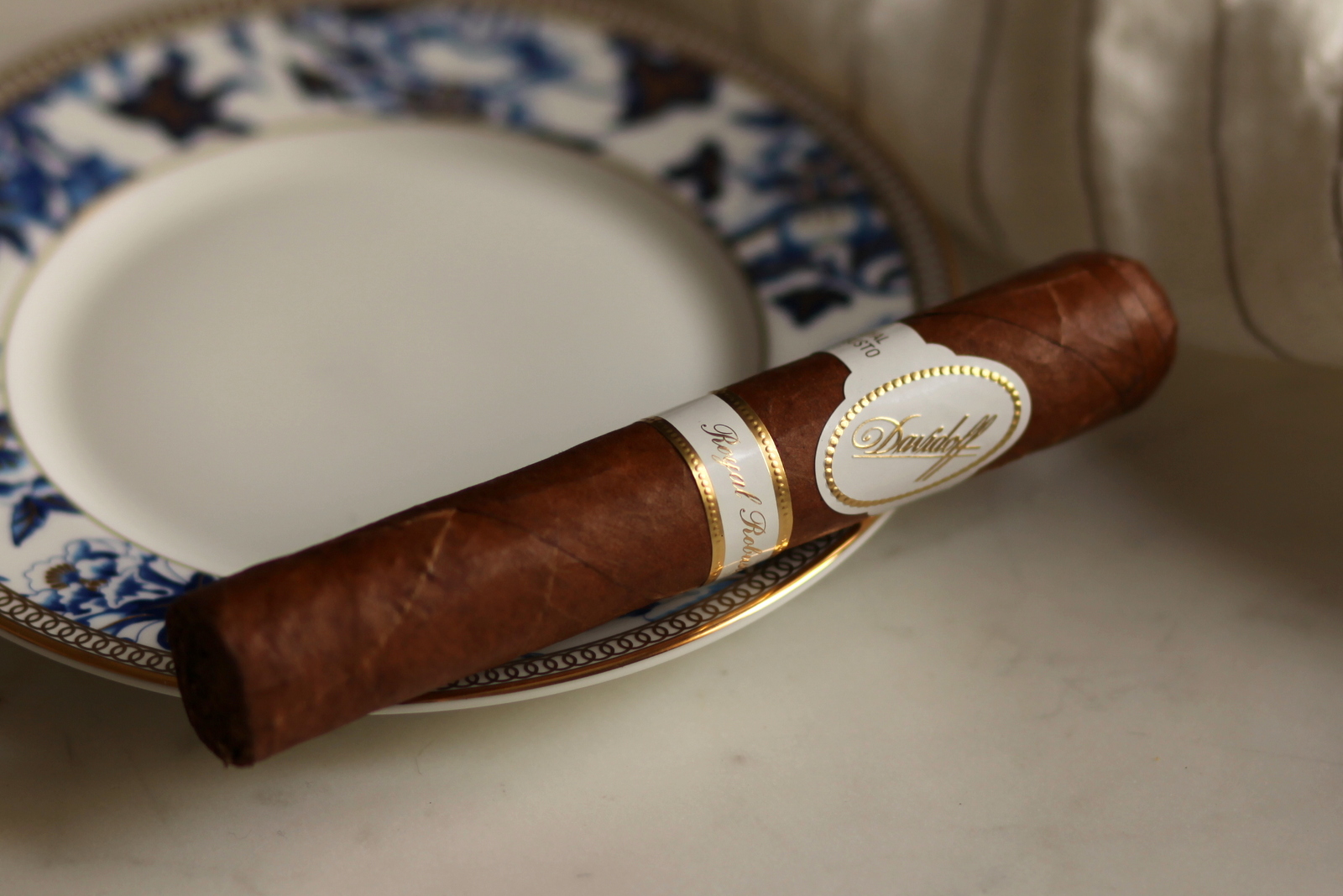 Once lit, the Davidoff Royal Robusto opens smooth and complex. I pick up a subtle white pepper, sweet cedar, and a very enjoyable vanilla cream-like note. The body and strength are both solid mediums. I think it’s an absolutely delicious way to open. I cant say smoke production is voluminous, but it is very good.

An inch in, the white pepper has ramped up on the palate and on the retrohale, and the creamy notes have taken back seat to a drier cedar profile. The salt and pepper ash is still holding, but has frayed a bit (a feature which remains consistent the length of the cigar). The burn is a bit wavy too, but that owes more to my original light which was not a full ember.

Nearing the end of the first third, I’m surprised to find I’m already feeling the nicotine in this cigar. A bit unique for me, particularly because I don’t often feel the nicotine in the entire span of many cigars.

No real change occurs until about halfway, where the strength and body decrease to just below medium. The smoke at this point is soft, almost pillowy, with a bit of the cream from the first third returning. The retrohale as well has calmed a lot. The burn has mostly corrected itself, but the ash continues to be quite flaky, prompting me to ash a bit more often than I’d like.

The final third is mostly the same, and may have even mellowed a bit more. My main observation is that the profile has very little white pepper and spiciness. A nice conclusion to the cigar, but I can’t help feeling I would have enjoyed a bit fuller of an ending.

The Davidoff Royal Robusto is a great cigar. It opens with a truly remarkable bouquet of flavors that are perfectly balanced. Still, I would have liked to have a bit more to the story the cigar tells in the second half, and in particular in the final third. For that reason, this cigar doesn’t compare to other Davidoff cigars like the Millennium Blend which offer deeper complexity and nuances throughout the smoke.

Brand evangelist, digital marketer, cigar and spirits expert specializing in consumer tasting and educational events. Matthias made the long trek from his hometown of Portland, Oregon to New York City in 2007, and in nine years has hosted more than 120 events and helped promote and launch dozens of cigar and whiskey brands in the U.S. In 2016, he joined the Cigar Journal Tasting Panel, blind-reviewing pre and new release cigars.
« Davidoff Colorado Claro Short Perfecto Review» Carolina Blue Maduro Gran Robusto Review