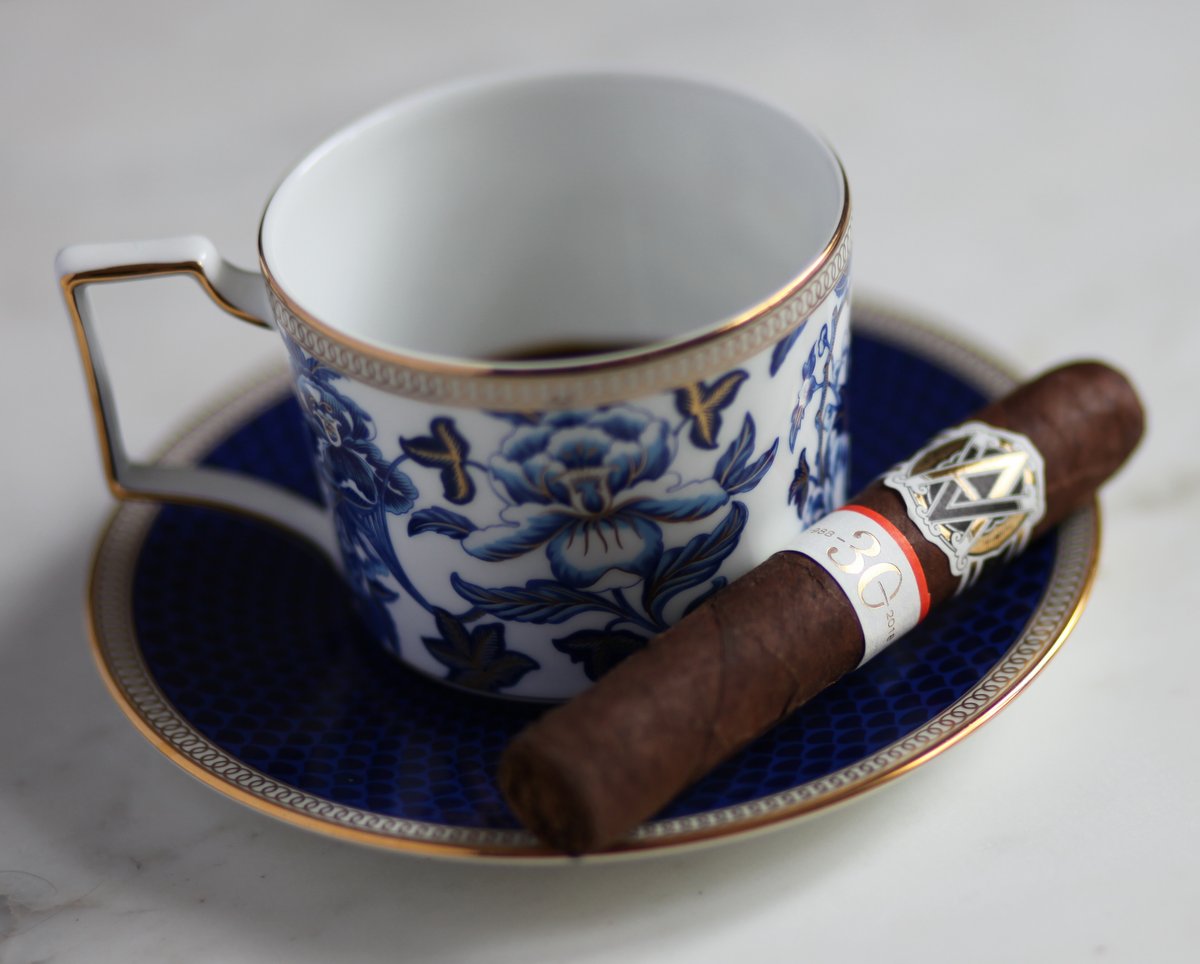 Up for review today is the AVO Maduro Robusto, a cigar that was discontinued by Davidoff in 2015. But you may have seen this cigar in stores lately: Davidoff decided to bring back the AVO Maduro as part of its celebration of 30 years of AVO cigars (reported by Halfwheel here).

The blend itself is identical to the original, so there really isn’t anything new here per se. But, I for one am glad that the cigar has made a return to the market as I’m a big fan of many of AVO’s cigars.

Now that’s out of the way, let’s get to the review.

The AVO Maduro wrapper comes dark, rustic, and with some noticeable veins and seams. It’s also quite rough to the touch as you can probably see in the photos. You’ll also notice that the branding on this cigar is quite beautiful. It sports the classic black, gold, and white band on top of a secondary band indicating the celebratory backdrop for this cigar. I’ve always been a huge fan of the primary AVO band, regardless of line. The texture, interlocking of the letters (the band spells “AVO” if you look front to back), it’s all spot on.

Smelling the foot of the cigar, I pick up whiffs of old oak, earth, leather. The pre light draw is just the right amount of restrictiveness, with few notes, mainly a bit of sweet earthiness. 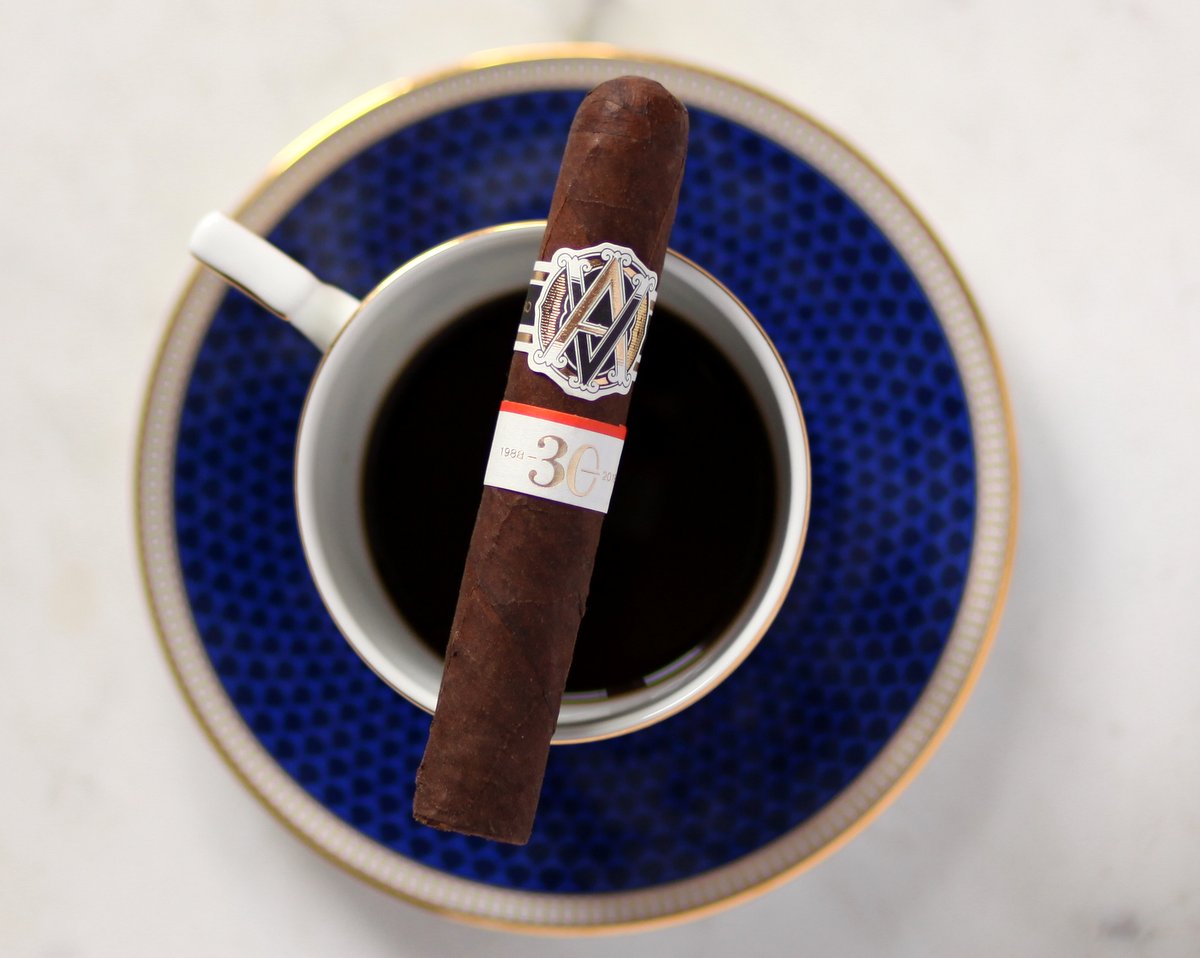 The AVO Maduro kicks off with loads of mild/medium bodied, medium strength smoke. The profile is a combo of two quite traditional sets of flavors. The AVO stamp is clear on this profile: there’s an overall lightness to the smoke (it’s also amazingly smooth), with mustiness, some cedar, and light floral notes. On top of that is the typical Maduro profile: earthy spice, savory, almost meat-like chewiness, and in this case a bit of creaminess. Layered on top of each other, the two sets of flavors complement each other quite nicely. It offers a complexity that many other Maduro smokes can’t match.

At an inch in, the flavor picks up just a touch, adding a peppery spice right on the tip of the tongue and a bit more sweetness to the palate. It’s nice to see the flavors moving a bit. An hour with the same exact flavor profile all the way through is not an indicator of quality. Unfortunately, it’s at around the same point that the burn canoes considerably, needing a major touch up to fix.

As the cigar burns into the second third, the body picks up to just above medium, but nowhere near full. The flavor palette has morphed substantially, with a bit more of the Maduro notes dominating the lighter AVO foundation. Two notes have hopped into the mix which I really like: raisin and dark chocolate. There’s also a spicy white pepper that’s eased it’s way in to the retrohale as well, giving the smoking experience even more character.

The final third surprises me a bit because the flavor palette continues to change and develop. Not in terms of strength, but with respect to the flavors present. There’s still a good amount of Maduro sweetness on the palate, but leather takes on a much more significant role as the cigar burns down to the end.

I have to say, in the first ten minutes of smoking the AVO 30 Years Maduro, I was preparing myself for a relatively mild and tame experience. Alas, I was so disappointed by the AVO Improvization 30 Years that it may have initially biased my expectations. Smoking the AVO 30th Maduro all the way through proved me dead wrong. While it doesn’t deliver a ton of strength, it actually presents a complex and well thought out progression of flavors.

Unlike some Maduros, this isn’t an after dinner cigar—it doesn’t have the body or strength to follow up a hearty dinner, especially if alcohol is involved (which can diminish the sensitivity of the palate). But this is a very solid afternoon smoke and would pair very well with espresso or coffee.