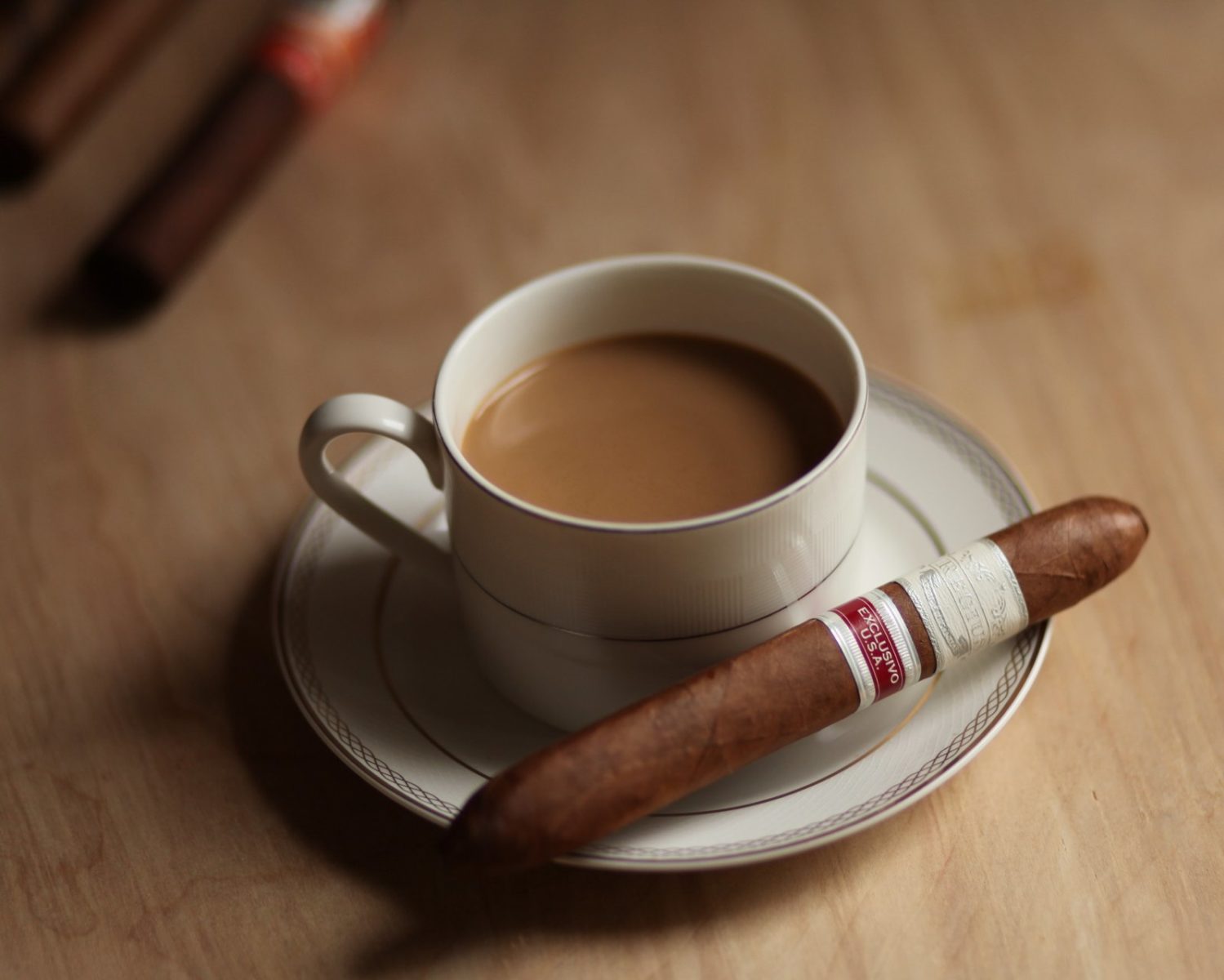 Regius Cigars is a UK based company that I admittedly had little experience with.  Their initial distribution began in Europe and now they have come to the States. The Regius Exclusivo U.S.A. Pressed Perfecto from Regius is exclusive to the U.S. As I learned each size in the line is blended with that particular vitola in mind. That is not always the case as some cigar makers create a blend and roll several sizes without tweaking it for that specific size. A cigar’s size affects the way it burns, how your palate interacts with the smoke to mouth ratio and the level of intensity it can yield.  When a cigar maker blends for each size you are getting the best example of that blend in each vitola. I was fortunate enough to sample the perfecto size and it certainly delivered. Enjoy! 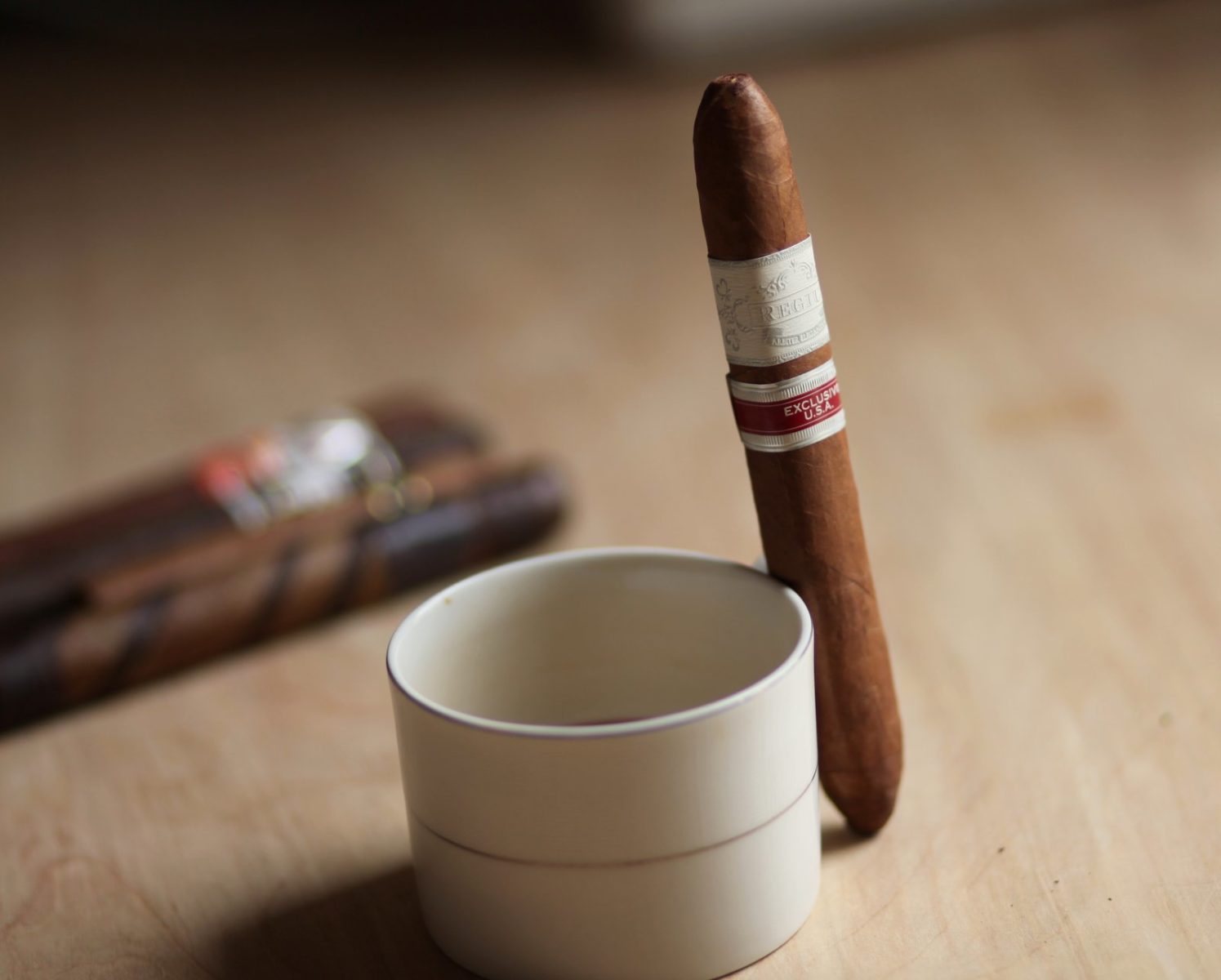 The Regius Exclusivo has a regal band with a silver and red label. The secondary band notes “Exclusivo U.S.A” designating its single country availability. The cigar has minimal veins with a milk chocolate colored wrapper. No noticeable soft spots were detected and the cigar was packed full of tobacco. Interestingly the foot is closed on both ends which is intended to have the cigar age slower over time with no air coming through the cigar. Obviously before lighting you need to clip the foot. The cigar is expertly rolled and crafted.

The Regius Exclusivo begins with toasty notes along with some sugary sweetness. Cocoa and a bit of spice hit the palate and the retrohale delivers the same.  Some earthiness and toast interplay upfront while the spice lingers on the back end. The Regius goes through several flavors within the first part of this cigar.

In the second half hay and earth take shape with a touch of mineralty. The burn is uneven at this point however it has not yet affected the flavor in a negative way. Some serious nuttiness comes through and cashew flavors dominate. The progression of this cigar continues to surprise and entice with spice and hay engulfing the mouthfeel. At present the body is medium to full with lush flavors constantly hitting you.

The final third delivers sweetness and cedar that stimulates the senses. The burn at this point corrects itself and emits a flaky ash. More earth and mineral characters build up and coat the mouth. The flavor of earth is rich and spice builds up on the retrohale. As the Regius comes to an end the palate lingers with earth, nuttiness and cedar. A delicious cigar.

Having little experience with Regius cigars, only smoking a few I can say this is a reason to try even more. The European market generally gravites to more mild to medium bodied smokes with more nuanced flavors. The U.S. market seems to prefer more bold smokes along with fuller flavors. The Regius Exclusivo has done an excellent job of creating a blend that offers rich flavor with enough medium to full bodied intensity to grab the market it was created for. I recommend trying the perfecto or grabbing a box as I am looking forward to smoking the rest of the line.

Christian offers a perspective of cigars ranging from vintage pre-embargo smokes, hard to find cigars as well as current releases. His 22+ years of smoking and love of travel have taken him on cigar journeys here and abroad. From smoking HERF’s in friends backyards to smoking Montecristo No. 2s on the terrace of the Hungarian Palace Hotel in Lido Italy, Christian takes the “everyman” approach to cigar smoking being it all about taste and enjoyment of where you are or who you are with.
« CAO Nicaragua Review» Davidoff 702 Series Aniversario Special T Review