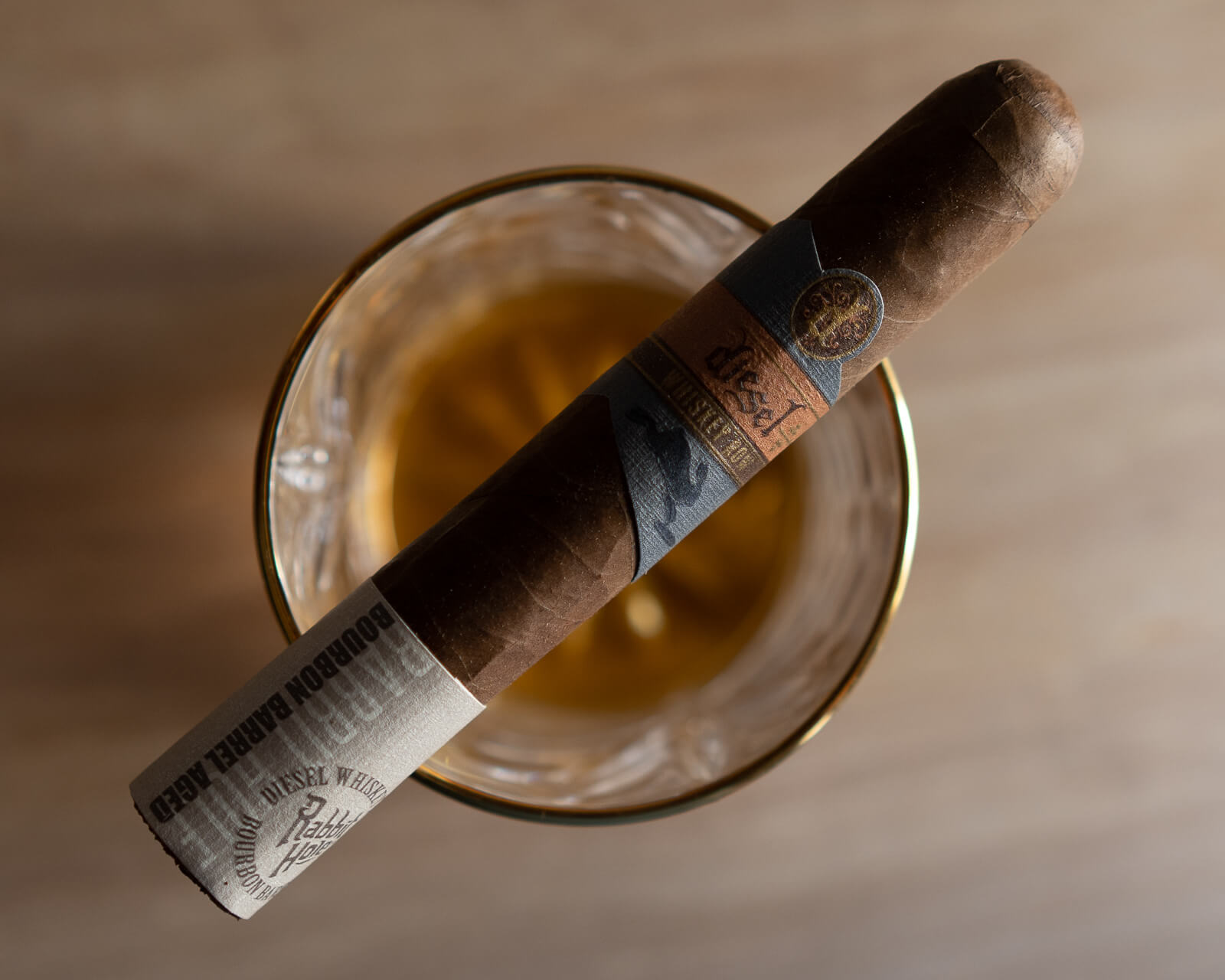 Up for review today is the Diesel Whiskey Row, a collaboration between AJ Fernandez and Rabbit Hole Bourbon. The cigar continues a growing trend of aging tobaccos in ex-whiskey or beer barrels to add another layer of complexity. In my experience, most barrel aged cigars tend to fail for one of two reasons.

As far as the second reason is concerned, this could be because the blender doesn’t know what they’re doing (it is a new process, after all), or because the barrels used to age the tobacco were former homes to garbage whiskey. Fortunately, Rabbit Hole Bourbon seems to be a competent spirit, with positive reviews all over the place online. So I have a fair bit of hope that, between AJ’s skill as a blender and good whiskey barrels, we’ll end up with a nice product here.

But I could be wrong. Let’s light up and find out.

In a statement about Diesel Whiskey Row, AJ Fernandez had this to say:

“A lot of passion went into this process and I am very pleased with the results. Aging the binder leaf in the bourbon barrels added an unexpected layer of flavor and aroma right beneath the wrapper. When you smoke Whiskey Row, you get a unique and complex experience that engages the senses unlike any other cigar I’ve smoked.”

I really like the presentation of the Diesel Whiskey Row Robusto. It’s got high quality paper double bands and a nice muted color palette over the Ecuadorian wrapper. The leaf is smooth with minimal veins, and the cigar is packed consistently the length of the cigar.

Off of the foot, there’s some subdued notes of cocoa, nuts, hay, barnyard, light spice and the smallest hint of vanilla (maybe the whiskey influence here). The barrel aging is much more pronounced on the cold draw, which features strong wood, various kitchen spices, coffee, and a slightly sweet ethanol note. The draw is good mostly free, about a 6/10 in terms of restrictiveness.

The Diesel Whiskey Row Robusto opens with voluminous medium bodied smoke that is toasty, textured and full of flavor. And man, it’s good. On the palate are notes of toasted bread, creamy cocoa, and black pepper. The barrel aging is evident, imparting bourbon like notes of charred oak, slight caramel and vanilla. The retrohale is the only drawback: it’s all black pepper and completely overpowering.

An inch in, the Diesel Whiskey Row Robusto has developed a solid white ash with a perfectly straight burn. Not much has changed flavor-wise, but the pepper on the tongue is now so strong and lingering that it’s hard to enjoy the other flavors. I’m hoping the cigar can claw back a bit of balance.

The solid white ash holds all the way to the start of the second third. At this point, the pepper moderates itself a bit, giving creamy cocoa, nutmeg, leather, and charred oak a bit more space to shine. The retrohale is still mostly pepper, though with some added charcoal. Vanilla, spicy cream, salted meat and oak make up most of the aroma. Construction remains flawless, with great smoke production, cool smoke, and a straight burn.

The cigar remains mostly balanced until the beginning of the final third. Here it again pepper dominates the palate, with bitter espresso and dry wood the only other perceptible notes. A bummer because when Diesel Whiskey Row is in balance it’s a hell of a cigar. Thankfully, the last two inches of the cigar find better balance, showcasing creamy cocoa, coffee, leather, charred oak and baking spices.

Despite being absolutely dominated by black pepper at times, the Diesel Whiskey Row Robusto is an extremely enjoyable smoke. The influence of the barrel aging is unmistakable, yet manages to avoid the overly sweet profile that characterizes barrel aged cigars of lesser quality. The interplay between the sweet and bitter elements of the profile is commendable and creates a dynamic smoking experience. Definitely a cigar to buy.

As a side note, though we never pair cigars with spirits during reviews, I have found Whiskey Row pairs remarkably well with bourbon (Pritchards was my choice). The sweetness of the bourbon balances out the overly aggressive pepper nicely.

Brand evangelist, digital marketer, cigar and spirits expert specializing in consumer tasting and educational events. Matthias made the long trek from his hometown of Portland, Oregon to New York City in 2007, and in nine years has hosted more than 120 events and helped promote and launch dozens of cigar and whiskey brands in the U.S. In 2016, he joined the Cigar Journal Tasting Panel, blind-reviewing pre and new release cigars.
« Daniel Marshall Black Label Review» Warped Serie Gran Reserva 1988 Review