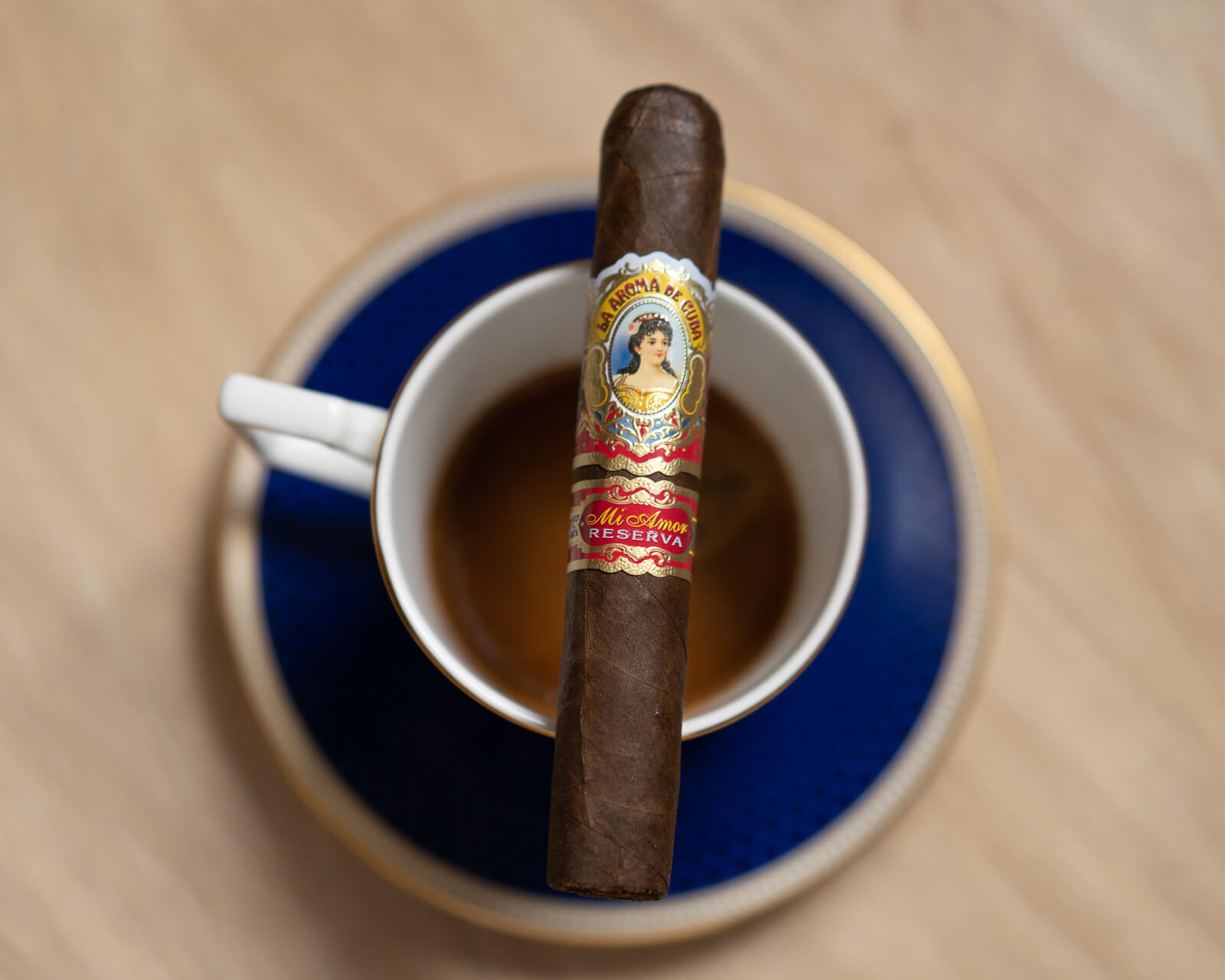 Pepin Garcia has been created legendary blends for others as well as himself for quite some time now. When the La Aroma de Cuba Mi Amor came on the scene sporting a Mexican San Andres wrapper that showed many what flavors quality Mexican wrapper can deliver, the cigar was met with praise and became a staple in the Pepin Profile. The La Aroma de Cuba Mi Amor Reserva Maximo sports a Mexican Oscuro wrapper which gives something extra to this blend and the line. I was able to smoke the Maximo last week and these are my thoughts. Enjoy!

The La Aroma de Cuba has a gorgeous dark chocolate wrapper with the classic La Aroma De Cuba band in elegant gold, yellows and blue with the female portrait resting in the middle. There is a secondary band “Mi Amor Reserva” in red, white and surrounded by gold leaf noting the new line. The cigar is slightly firm to the touch and full of tobacco. There are some veins to this wrapper which doesn’t detract from the quality of the roll. 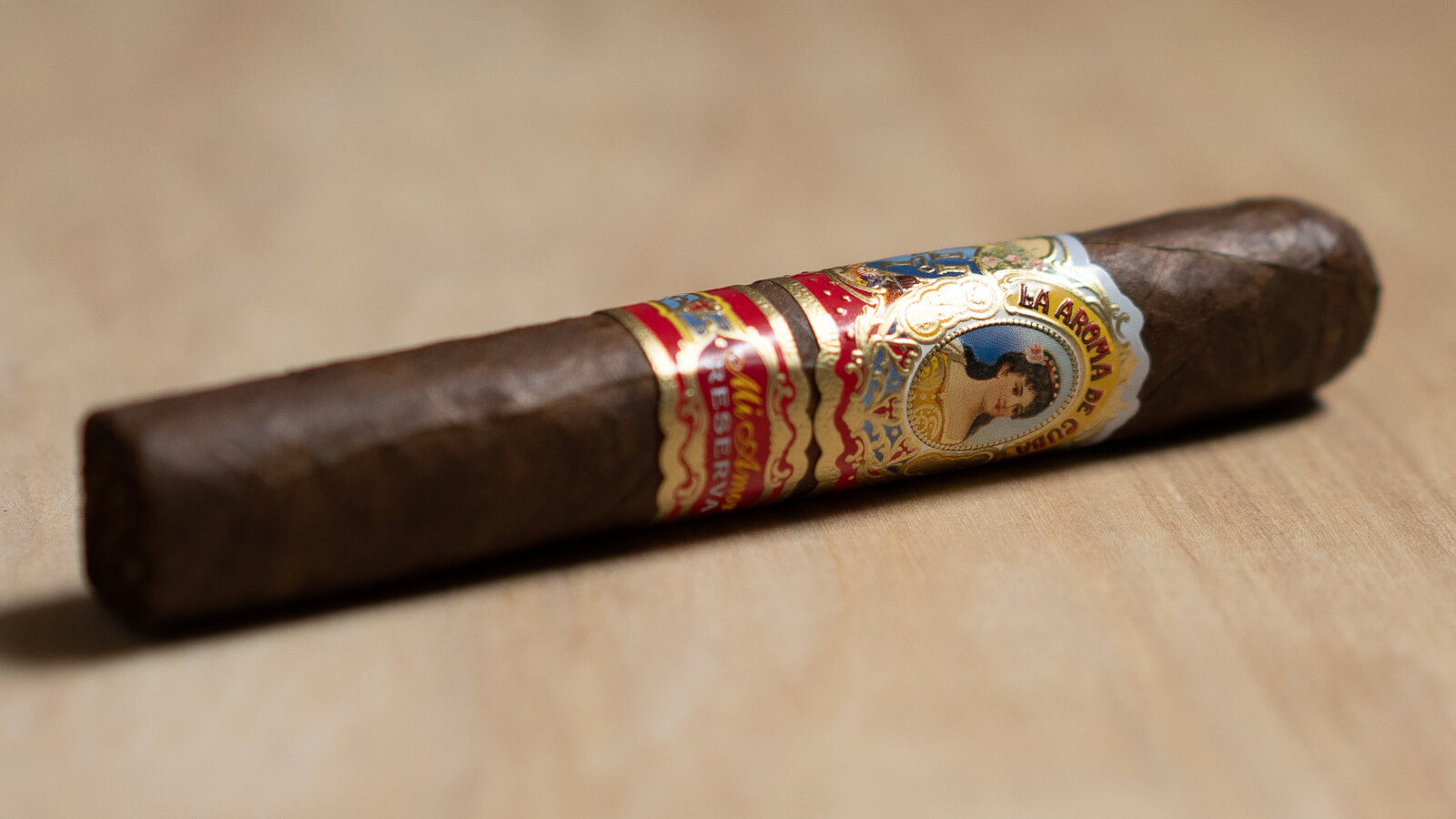 Lighting the La Aroma de Cuba Mi Amor Reserva Maximo, you get smokiness and toast at first. As the flavor builds a bit of spice and lush tobacco draws full into the mouthfeel. The spice upfront yields to graham cracker on the finish. In the next few puffs, nougat and cedar are coming forward big time. The cigar is already starting to show its complexity in the first third.

The second half of the La Aroma turns savory with tobacco, meat and leather.  The spice soon returns along with earth and cocoa powder. The flavors are really pronounced at this point, with earth dominating. The richness of the tobacco complimented by toasted wood and leather gets the palate salivating.

The final third brings milk chocolate followed by smokiness much like the beginning of the cigar. Earth and a core of pepper emerge that kicks up the profile and enlivens the senses. As the cigar comes to its conclusion spice, earth and toast intermingle creating a long finish.

Don Pepin has hit the mark many times in his lines and with other peoples cigars that he’s blended. One could argue he has been overextended as some smokes don’t always deliver in terms of lasting flavor. I will say after meeting the man and picking him up at the airport once with his partner: he is a man that knows how to care for tobacco and the quality is always evident. The La Aroma de Cuba Mi Amor Reserva shows you how wonderful different types of Mexican leaf can be when blended and cared for properly. I felt this cigar is a masterful blend.

You should be smoking and buying a box for your humidor!

Christian offers a perspective of cigars ranging from vintage pre-embargo smokes, hard to find cigars as well as current releases. His 22+ years of smoking and love of travel have taken him on cigar journeys here and abroad. From smoking HERF’s in friends backyards to smoking Montecristo No. 2s on the terrace of the Hungarian Palace Hotel in Lido Italy, Christian takes the “everyman” approach to cigar smoking being it all about taste and enjoyment of where you are or who you are with.
« Davidoff Florida Selection Review» Powstanie Broadleaf Perfecto Review