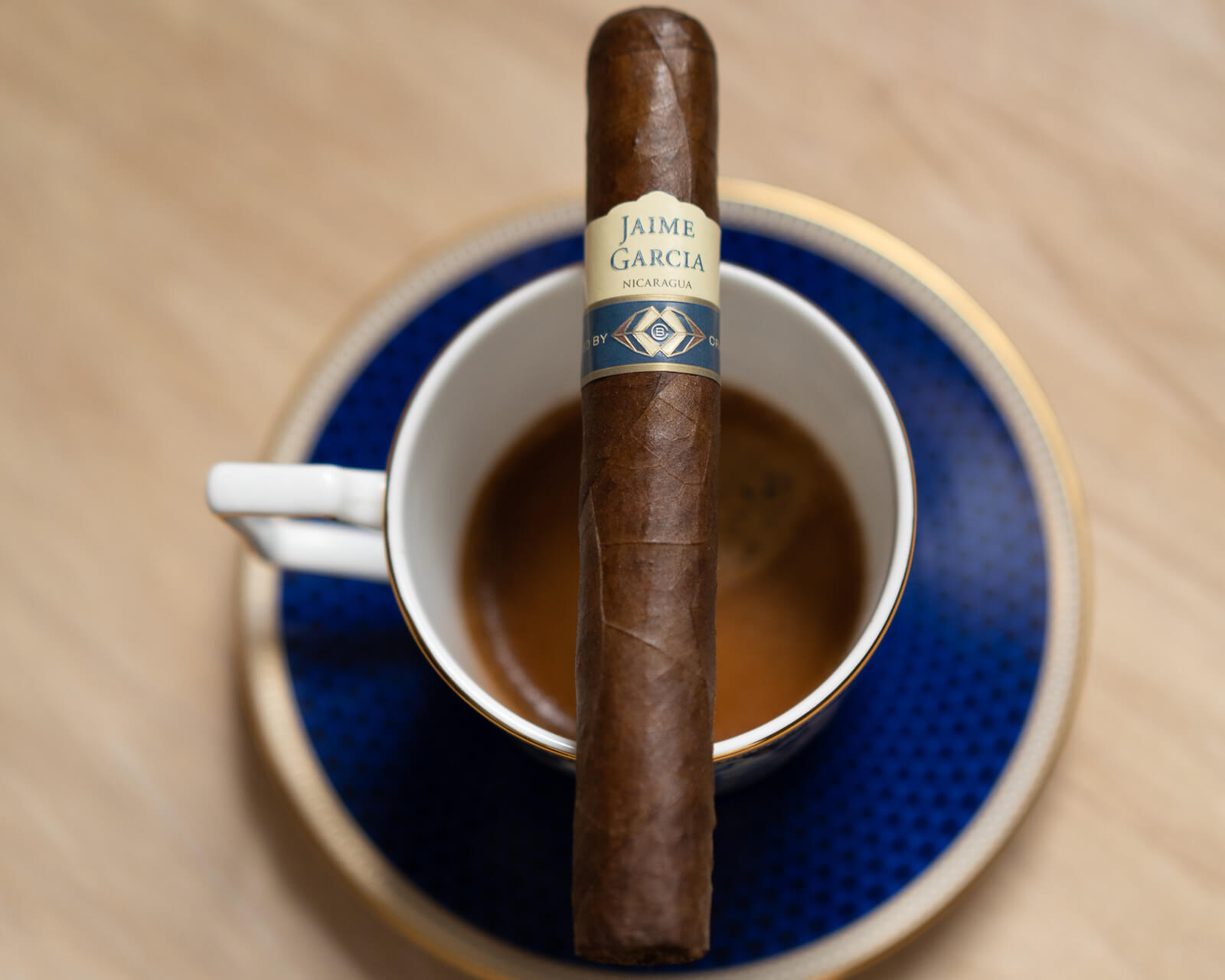 Jaime Garcia son of the master blender Don “Pepin” Garcia has created a cigar that’s an homage to his father. “Crafted” By Jaime Garcia is a Nicaraguan Puro donning a Habano Rosado wrapper with Nicaraguan binders and filler grown on the Garcia’s farm. I have been a fan of the JG Especiale’s and have been looking forward to trying this cigar.

The Crafted By Jaime Garcia was released in three sizes: 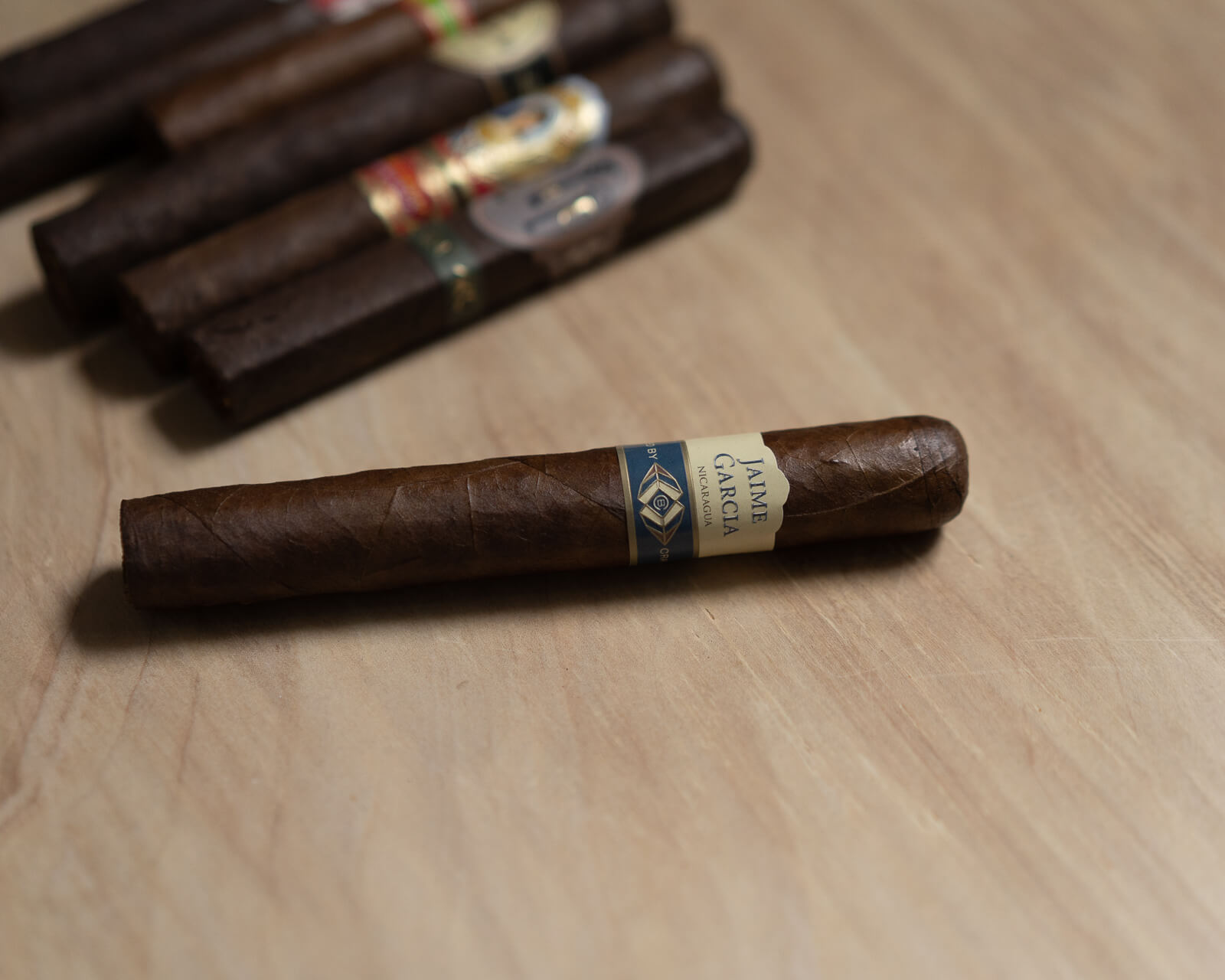 The Jaime Garcia Crafted cigar is a richly hued red veiny wrapper. Full of tobacco with no soft spots and appears well rolled. It’s a solid toro with some heft in the hand. These are similar in color and design as the Especiale with the off white and blue label although this band simply reads “Jaime Garcia” then “Nicaragua” underneath.

Before lighting the Jaime Garcia the wrapper has a saltiness to it which I’ve enjoyed with some Cuban cigars. As the cigar lights I am greeted by a bleach taste which I would surmise is due to insufficient fermentation of the Tobacco. Within the next few puffs the taste dissipates and milk chocolate and saltiness dominate. The sweetness of cocoa along with a blast of rich tobacco comes through and coats the palate. The salinity continues with cedar and a bit of oak. 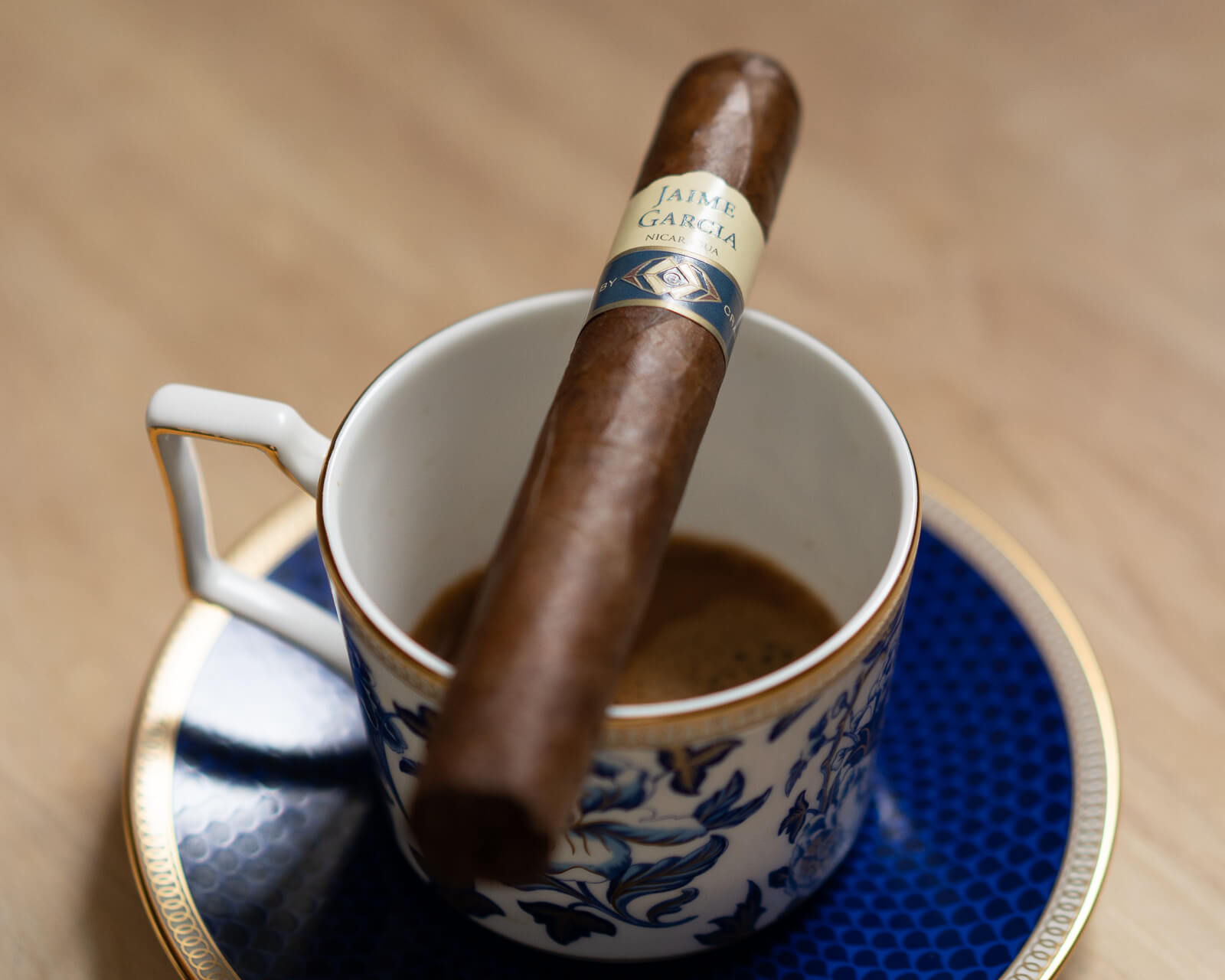 The second half tobacco and earth intertwine with balsa wood and a bit of white pepper. The progression turns to minty flavors with more cedar. Sweetness begins to develop with earth on the finish. Midway some cinnamon and spice begin to cultivate giving the cigar a new liveliness to it. The milk chocolate returns on the retrohale as well as a bit of oak.

The last third delivers coffee and earthiness upfront with a finish of cocoa. Lots of spice and tobacco emerge and kick up the fullness of the cigar. The cigar burns a bit hot despite taking time to smoke. The salinity reappears although a lot more subtle than its start. As the Jaime Garcia reaches the end oak and tobacco round out the finish.

I’ve enjoyed the Jaime Garcia Especiale Reserva’s for their full flavor and spice. The Jaime Garcia “Craft” is a bit more subdued in taste than the Reserva line although it has a place in the JG profile. I was put off by the bleach flavor and a bit surprised as the Garcia’s have been known to be on top of their tobacco especially during the crucial fermentation process. I could guess with their larger factory it could be more of a rush to put product out but that is mere inference.  Regardless the cigar developed into some fine flavors harking back to the Especiale Reserva blend. If you’ve enjoyed the profile of the Jaime Garica Especiale’s then you should give Jaime Garcia Craft a comparative shot.

Christian offers a perspective of cigars ranging from vintage pre-embargo smokes, hard to find cigars as well as current releases. His 22+ years of smoking and love of travel have taken him on cigar journeys here and abroad. From smoking HERF’s in friends backyards to smoking Montecristo No. 2s on the terrace of the Hungarian Palace Hotel in Lido Italy, Christian takes the “everyman” approach to cigar smoking being it all about taste and enjoyment of where you are or who you are with.
« Powstanie Broadleaf Perfecto Review» Tatuaje The Bride Review