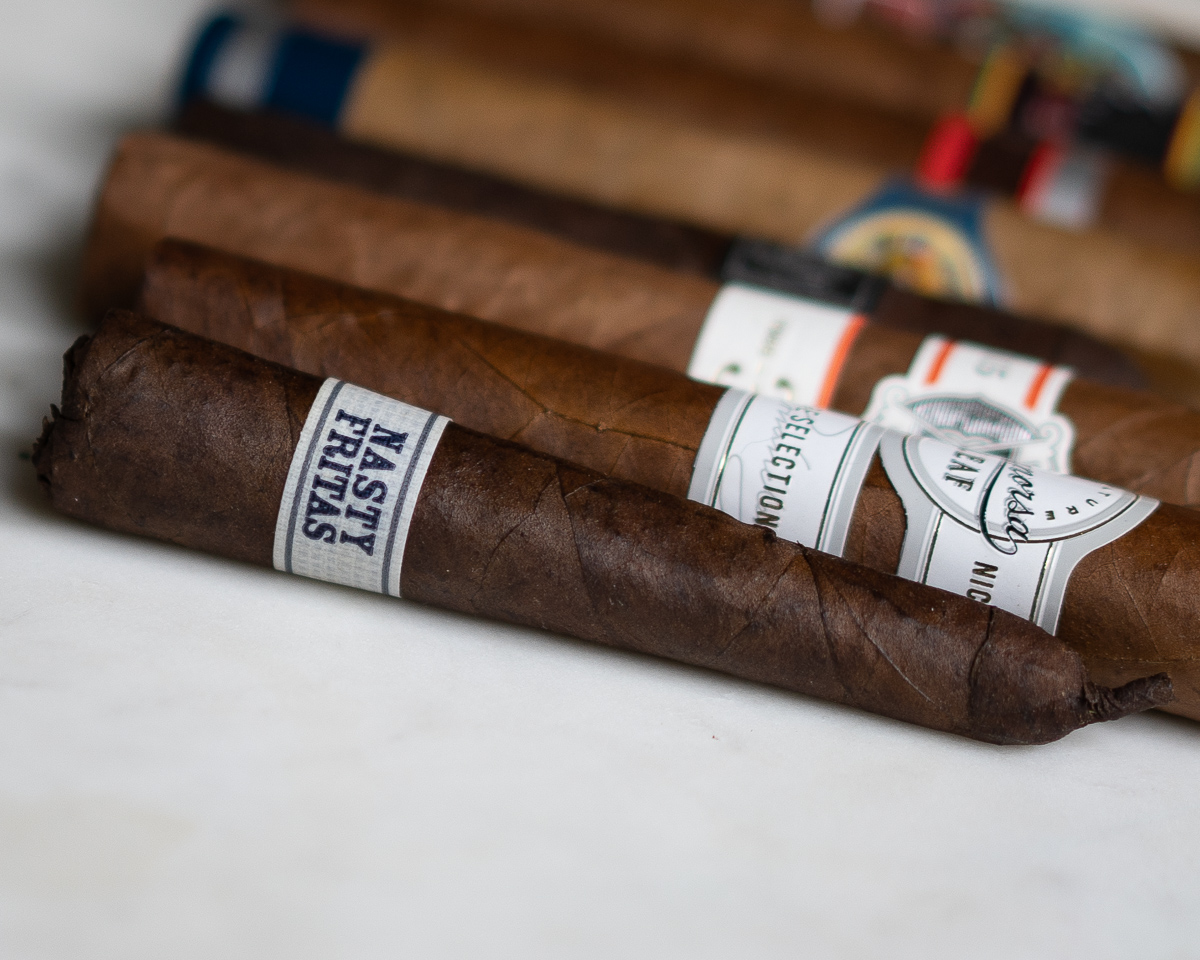 Drew Estate is, in my mind, the cigar company that kicked off the trend of turning ‘classy cigar culture’ on its head with bizarre product names. With names like Velvet Rat, Dirty Rat, Feral Flying Pig, MUWAT (My Uzi Weighs A Ton), and more, the company established a reputation for producing great product with a quirky spin. 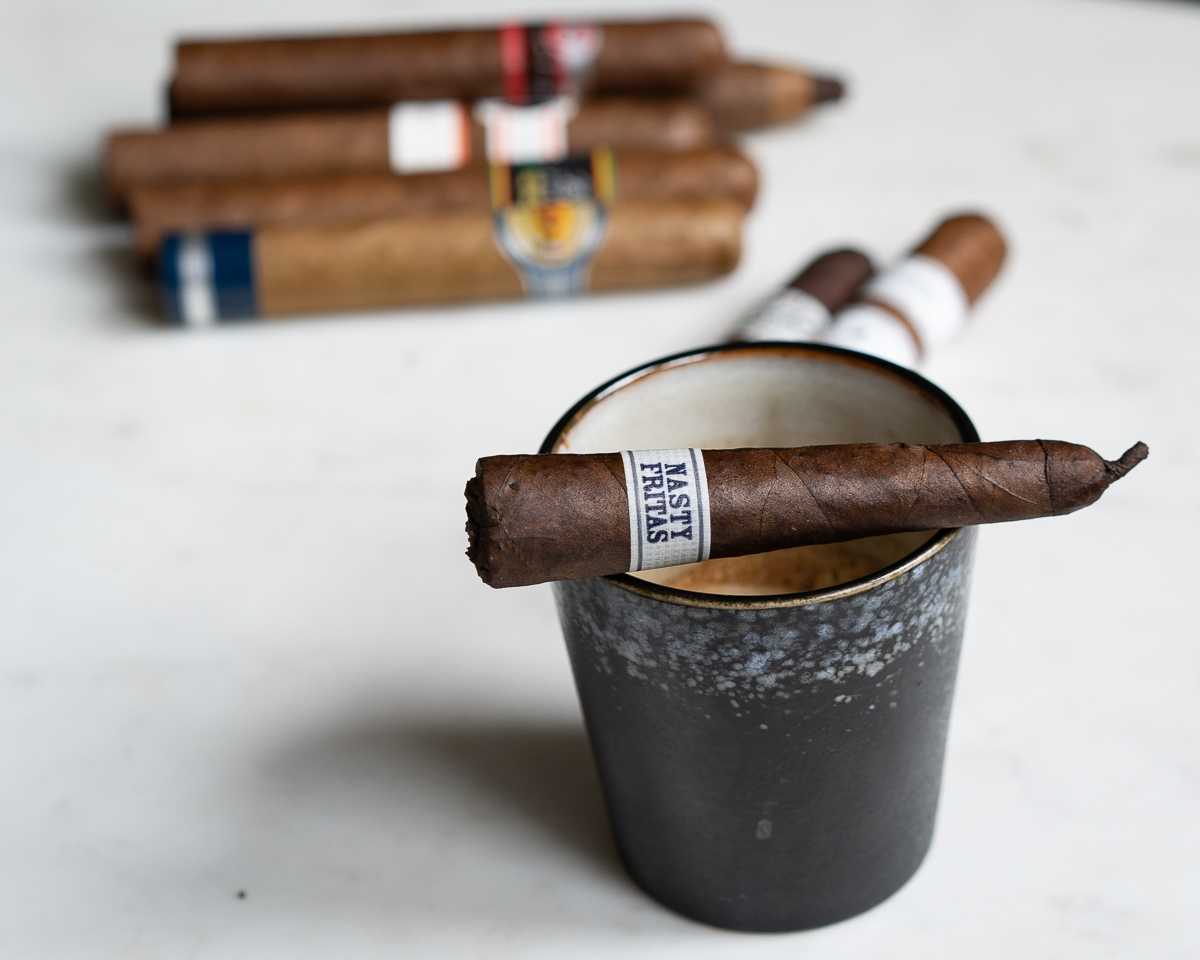 Well what to say about the Nasty Fritas. It’s a strange looking smoke, with a long pigtail cap, closed foot, a and a rugged Connecticut Broadleaf Oscuro wrapper. The outer wrapper is a rugged dark brown with a bit of lighter marbling. The cigar is packed mostly consistently, though there’s a part at about halfway that has a lot of give when squeezed, suggesting some inconsistency.

Off the foot are aromas of barnyard, tree bark, trace amounts of white pepper, potato chips and smoky raisins. The pre light draw is perfect in terms of restrictiveness, with heavy spices, oak, some citrus, and charcoal on the palate.

Like other ligas from Drew Estate, the smoke production on lighting up is immense. The closed foot gives the beginning an extra kick of condensed charred oak and pure dark cocoa powder. Once the closed foot burns away, the filler ignites, giving some additional complexity, with medium bodied notes of white pepper, toasted bread, bitter espresso, peppercorn, and light butter. The retrohale is mild and smooth, with charcoal, nuts, and cocoa powder.

Overall, the profile in the first three quarters of an inch is dark, rich, and very enjoyable. 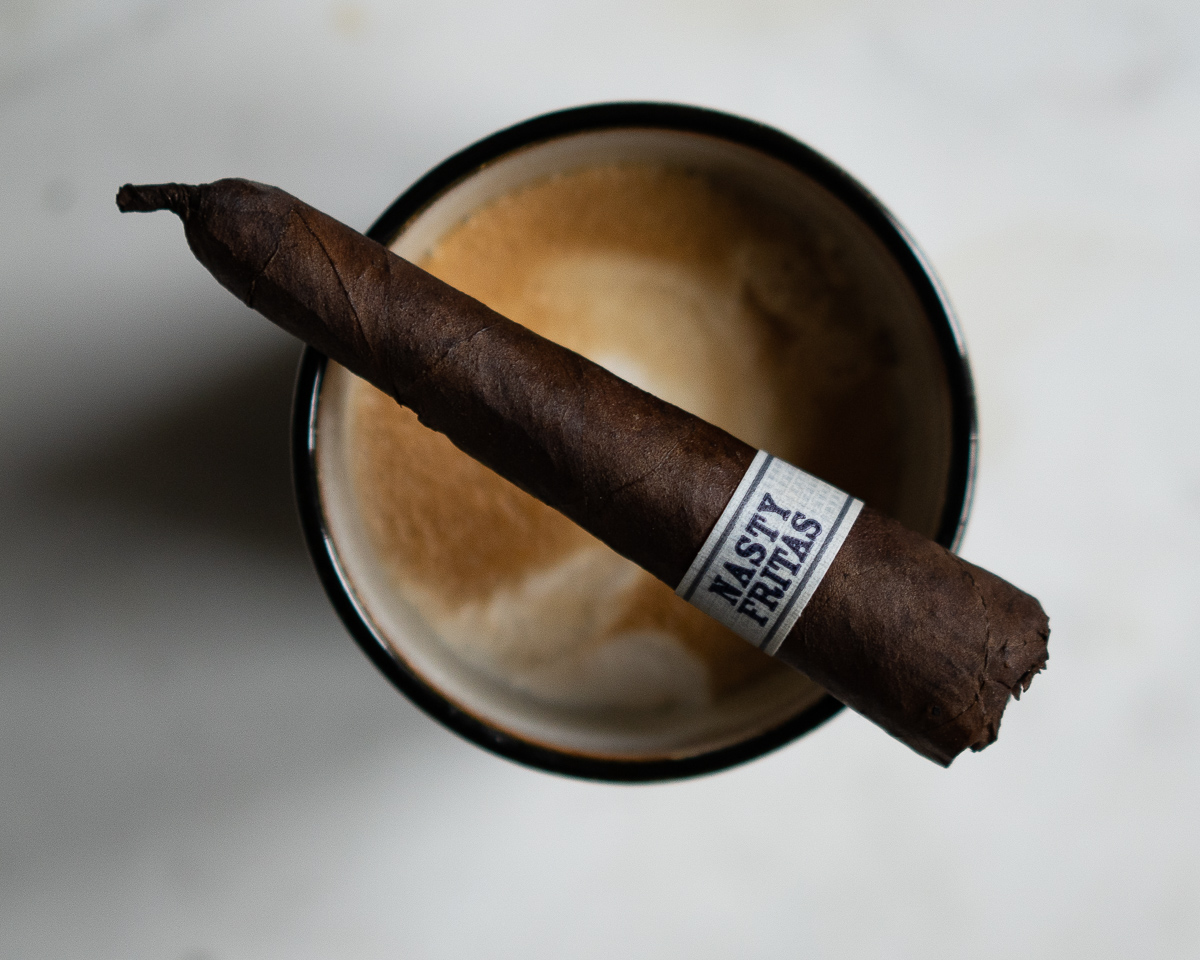 At about an inch in, the white ash is still holding, the burn is straight, and the Nasty Fritas has progressed enough that the ring guage is at about 50. The charcoal notes here morph into something akin to peppery leather, and a nice stone fruit note plays in the background. At the same time, a slight red pepper emerges that activates the tip of the tongue. For a $6.50 stick, and small as it is, I’m pretty satisfied with the amount of flavor movement thus far.

And it doesn’t stop there. As the Nasty Fritas burns past halfway and the ember tapers even more, the smoke takes on some more texture, and black pepper and toasted wood takes on a much more prominent role. It’s not as complex as the first third, but the increasing strength makes the cigar all the more enjoyable.

The final third changes even more, with the smoke taking on a much more savory character. Flavors include smoked ham, toasty wood, peppercorn, and natural tobacco, and the strength is north of medium but not at full. Overall this third is quite nice, and I’m doubly impressed that  the construction has remained perfect despite the cigars unorthodox shape. Also, the smoke remains cool, allowing me to smoke the cigar down to the last half inch.

I’m very impressed with the Nasty Fritas. It doesn’t start with the most flavorful experience, but it develops nicely and the construction never falters. The flavors of pepper, toasted wood, smoked ham, and charcoal complement one another particularly well. So I think if Drew Estate’s intent was to create a new favorite in the short cigar segment, I think they’ve done it.

Drew Estate fan or not, you should give Nasty Fritas a try.

Brand evangelist, digital marketer, cigar and spirits expert specializing in consumer tasting and educational events. Matthias made the long trek from his hometown of Portland, Oregon to New York City in 2007, and in nine years has hosted more than 120 events and helped promote and launch dozens of cigar and whiskey brands in the U.S. In 2016, he joined the Cigar Journal Tasting Panel, blind-reviewing pre and new release cigars.
« Liga Privada T52 Petit Corona review» Guillermo Leon Robusto Review