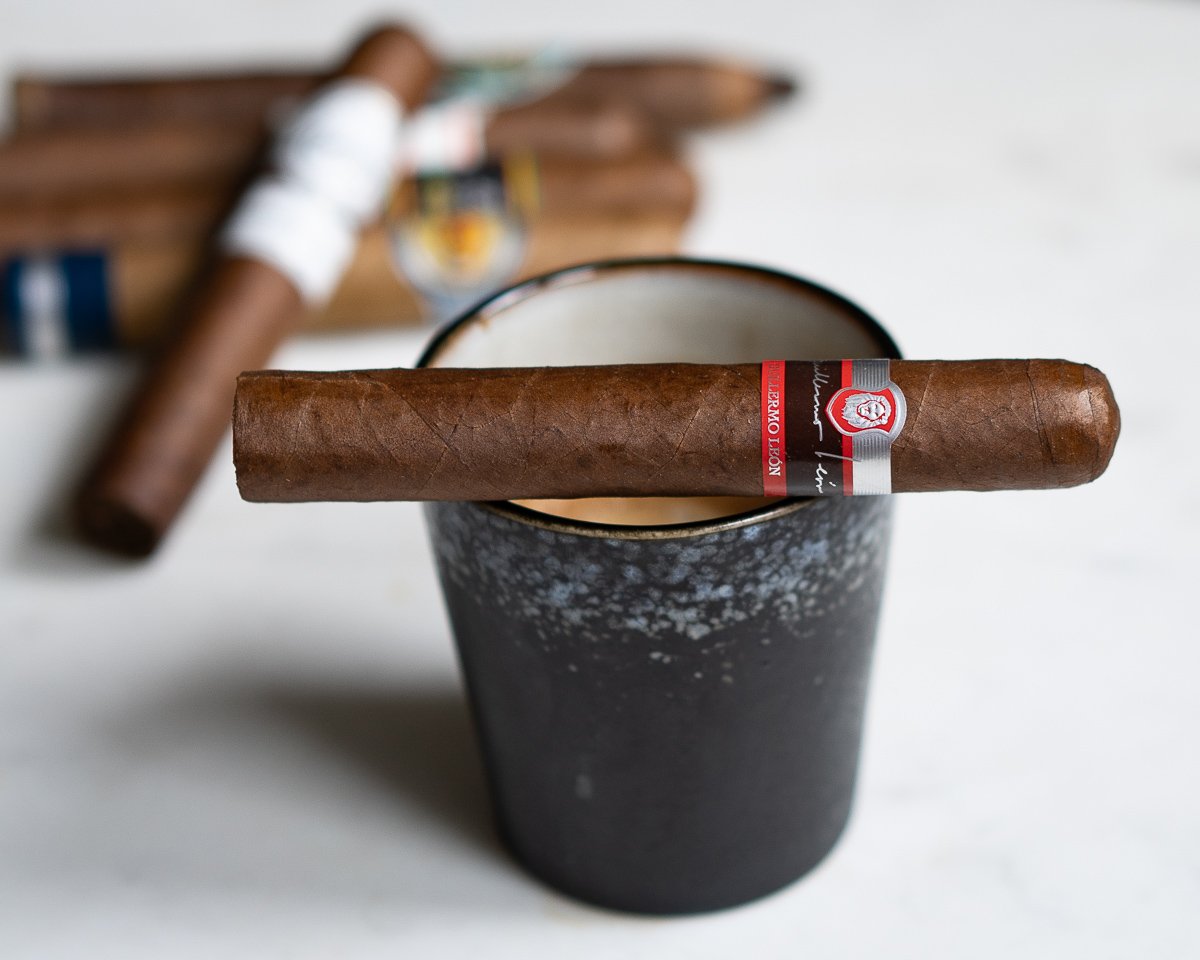 Guillermo Leon, the owner of the oldest cigar factory in the Dominican Republic, has made his mark with his signature line. The Guillermo Leon is a blend of tobaccos from several countries in an effort to add complexity to the cigars. The quality of tobaccos the company has put forth are always impressive and the craftsmanship stellar. At times the blends can feel similar from line to line, but I was excited to give the Guillermo Leon robusto a try to see what it could offer.

The Guillermo Leon is offered in five sizes:

The Guillermo Leon robusto wears a milk chocolate Ecuadorian Habano wrapper that is silky to the touch. The cigar has slight veins and is fully packed with tobacco. There are no soft spots to speak of and the roll of this cigar is perfect. The label displays the “Leon Lion” with silver blocking above, a black band with Guillermo Leon’s signature featured prominently followed by a red band and the words Guillermo Leon on the bottom. 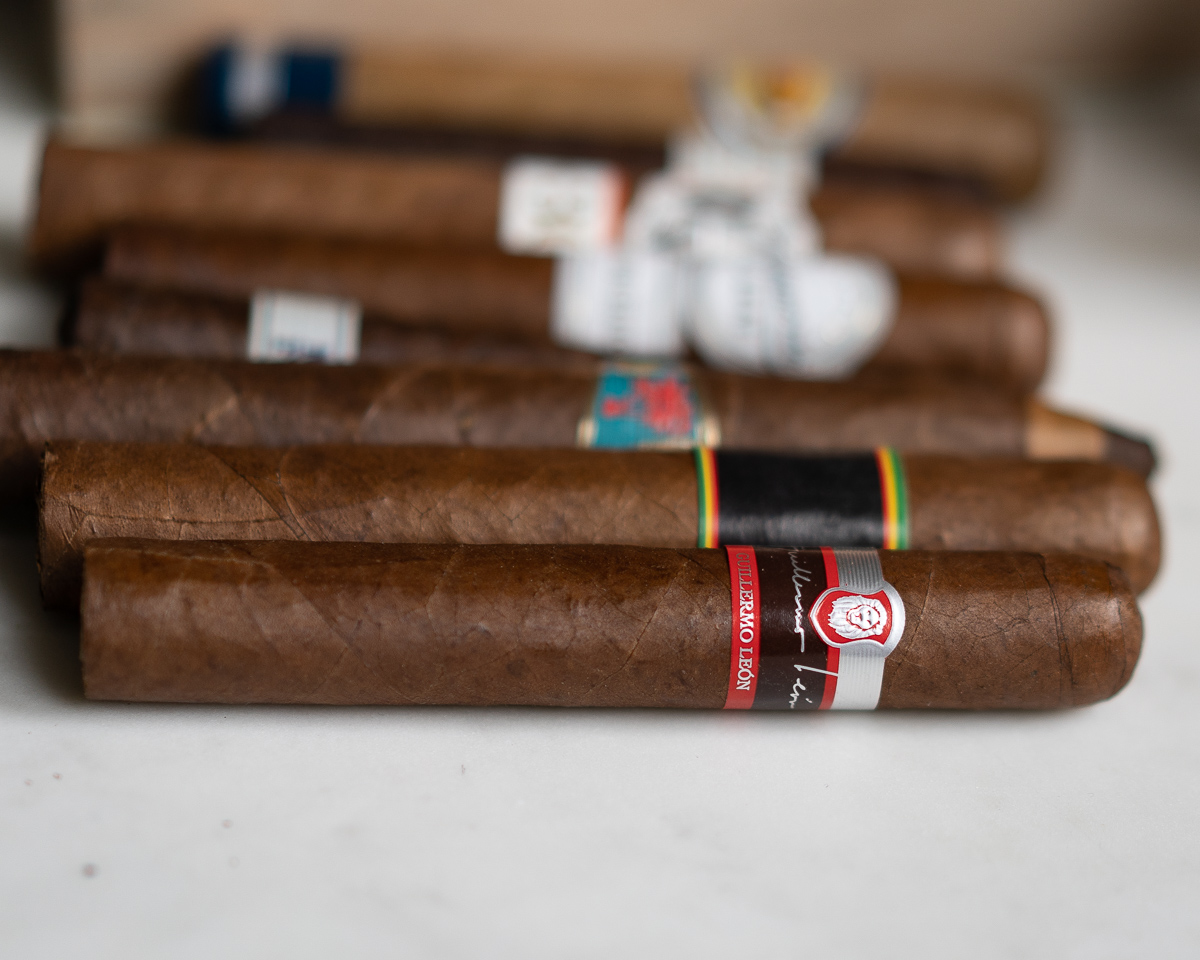 As I clipped the robusto with a straight cut, the dry draw provided me with salty and sweet tobacco and a bit of earthiness resonating on the tongue. Lighting the flame to the cigar the initial puffs gave earth and peppered spices immediately. The draw was excellent and yielded a nice amount of smoke from the cigar. The earth and spice turned to cream, oak and some citrus on the palate. The retrohale put forth wood and graham cracker crust. To start the Guillermo Leon robusto offered some nice complexities. 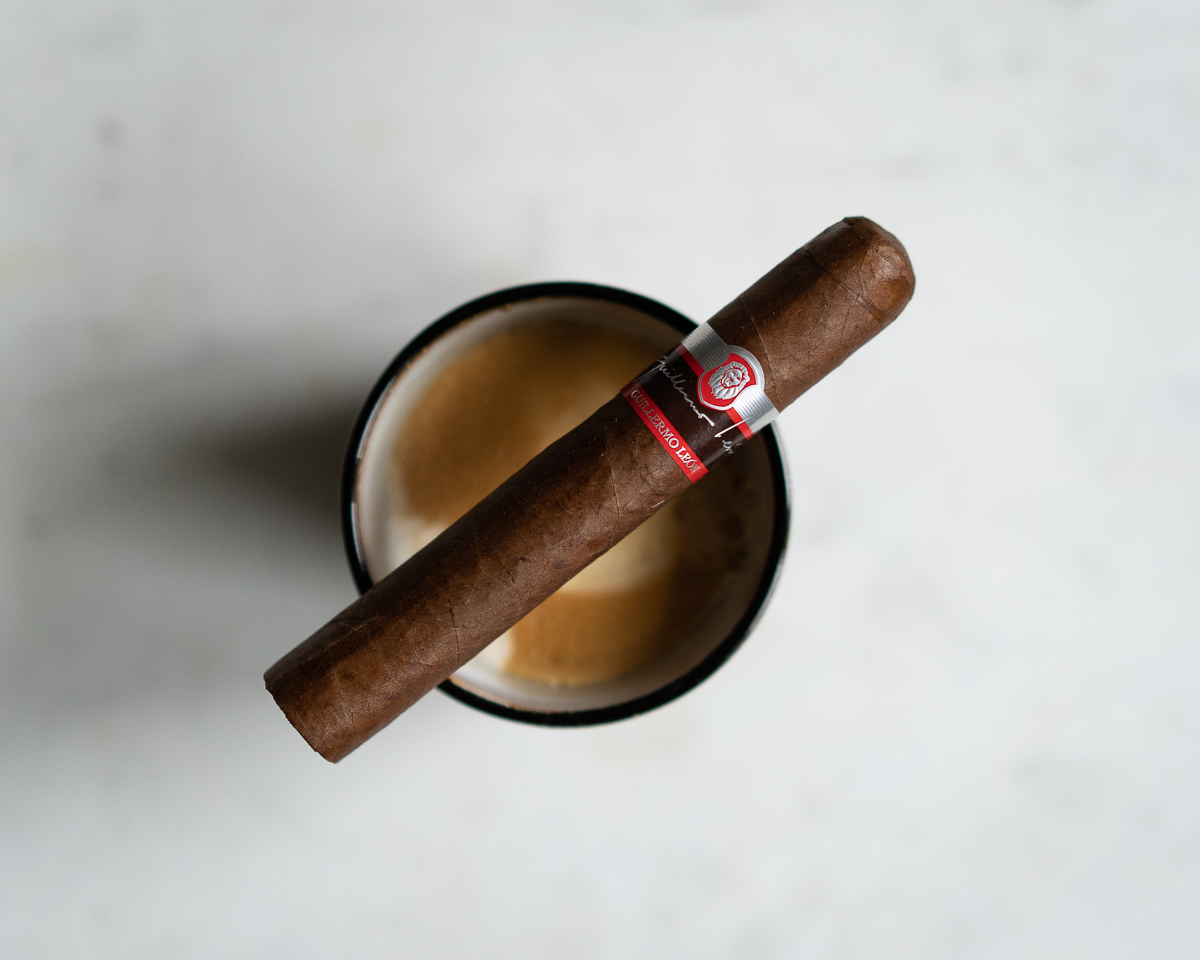 As the cigar progressed, the ash was white and razor sharp, a nod to its construction. The development of toast, amaretto and ginger were on full display. Midway through, Bing cherries came through on the tip of my tongue with a soft creamy finish. Several puffs further and the pepper and spice intertwined with salinity on the back end.

The final third of the Guillermo Leon robusto became more earthy and gritty. I sensed an idea of the soil types used as the earth was so developed. The progression hit me with lots of black pepper followed by toast and cedar. The finish of the cigar surprised me with espresso notes and some sweetness. A fine complex cigar.

Guillermo Leon has always maintained quality with his La Aurora brand and his signature series is a bold departure in terms of flavor and style. I enjoyed the complexity of flavors from spice, to earth, cedar, toast and even espresso. The quality was excellent and the burn and draw the whole way through is just how you want to smoke a cigar. The size is easy to pick up and the blend in this vitola showed offed the various countries tobaccos to wonderful acclaim. I can easily recommend trying this cigar or purchasing a box as you will be most pleased.

Christian offers a perspective of cigars ranging from vintage pre-embargo smokes, hard to find cigars as well as current releases. His 22+ years of smoking and love of travel have taken him on cigar journeys here and abroad. From smoking HERF’s in friends backyards to smoking Montecristo No. 2s on the terrace of the Hungarian Palace Hotel in Lido Italy, Christian takes the “everyman” approach to cigar smoking being it all about taste and enjoyment of where you are or who you are with.
« Drew Estate Nasty Fritas Review» Gran Habano Blue In Green Gran Robusto Review