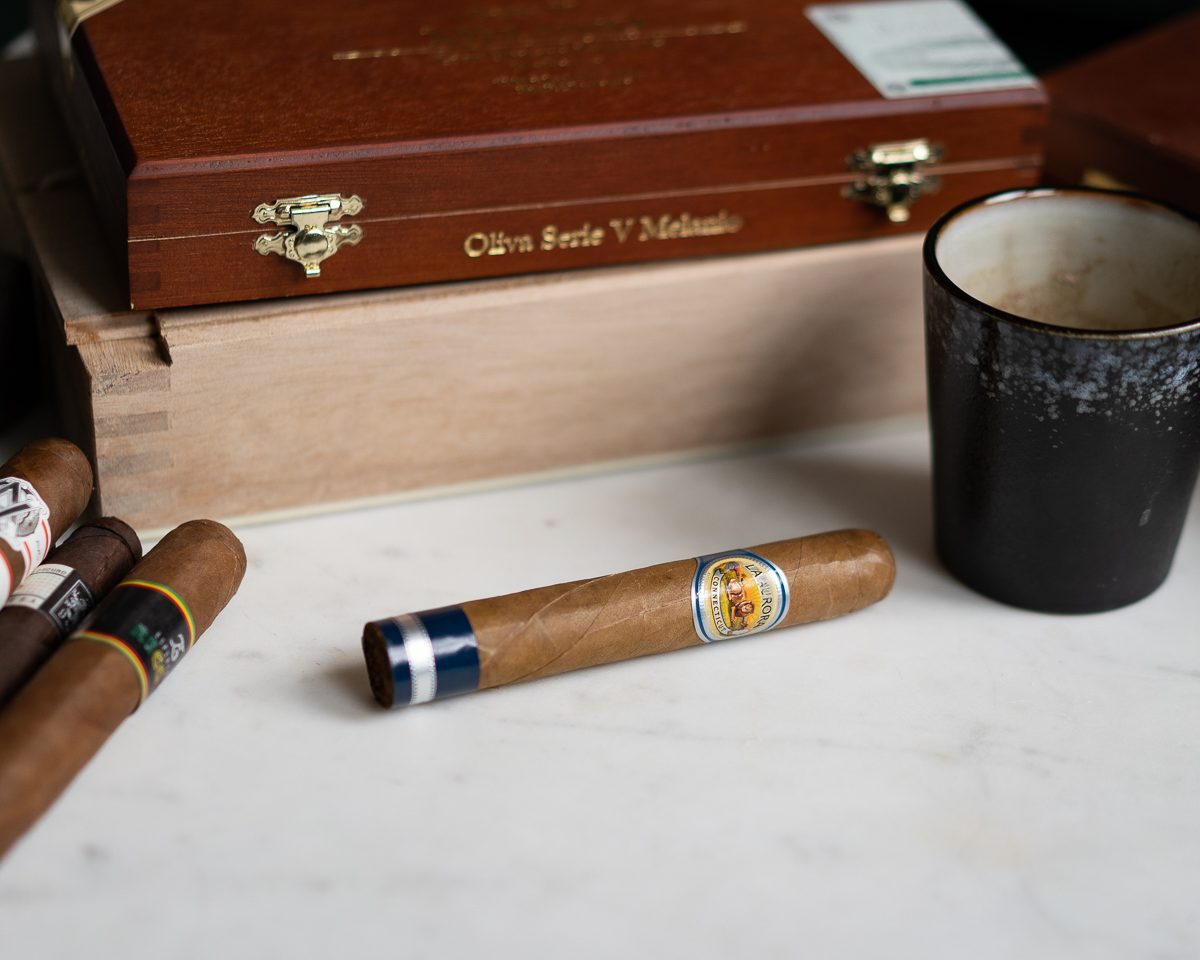 From the oldest cigar company in the Dominican Republic comes the La Aurora Preferidos Sapphire Connecticut Robusto. This is a concept line of six different blends in which an expert roller is utilized allowing them to only roll a hundred cigars per day. I’ve smoked a lot of La Aurora cigars over the years with some being truly wonderful while others falling short. I was excited to give this blend a try and see how it compared to the various blends the company puts forth. 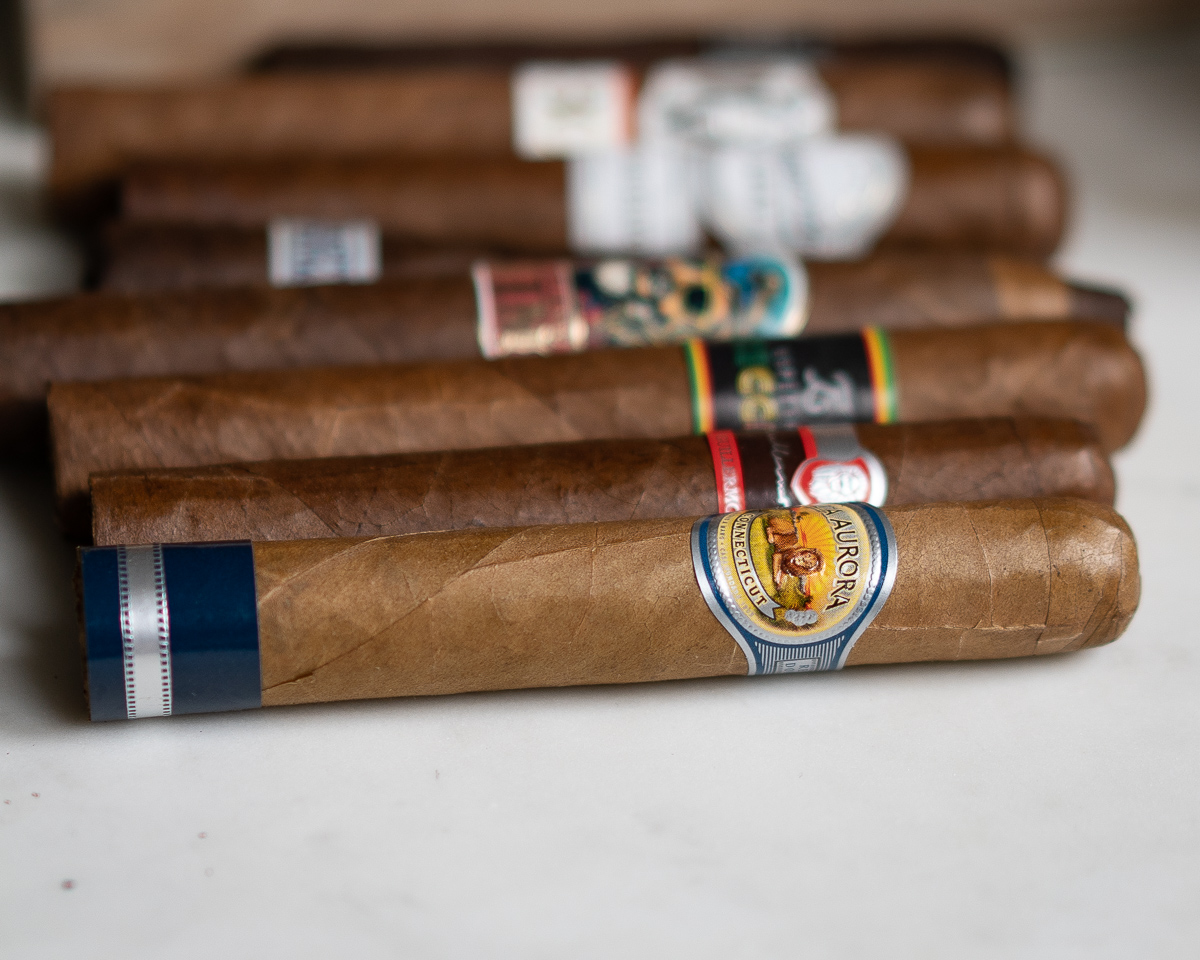 The wrapper on the La Aurora Preferidos Sapphire Connecticut Robusto has a pale, almost green color and is tightly packed, and there are significant veins that surround the entire cigar. The band has the beautiful La Aurora Lion in the middle with a stunning sunrise in the background. The outlining silver and blue surrounding the band gives it a bold classic feel. “La Aurora” reads atop with “Connecticut” on the bottom. Aside from the slightly tinged wrapper color the band makes the cigar stand out.

The dry draw yielded strong oak and fresh tobacco. As my match hit the foot of the La Aurora Connecticut, it delivered a blast of oak trailed by a honeyed sweetness. The draw was perfect, offering the right amount of resistance. As the cigar warmed up, sweet cedar came through in spades on the retrohale. Notes of oak interplay’s with earl grey tea at this point. 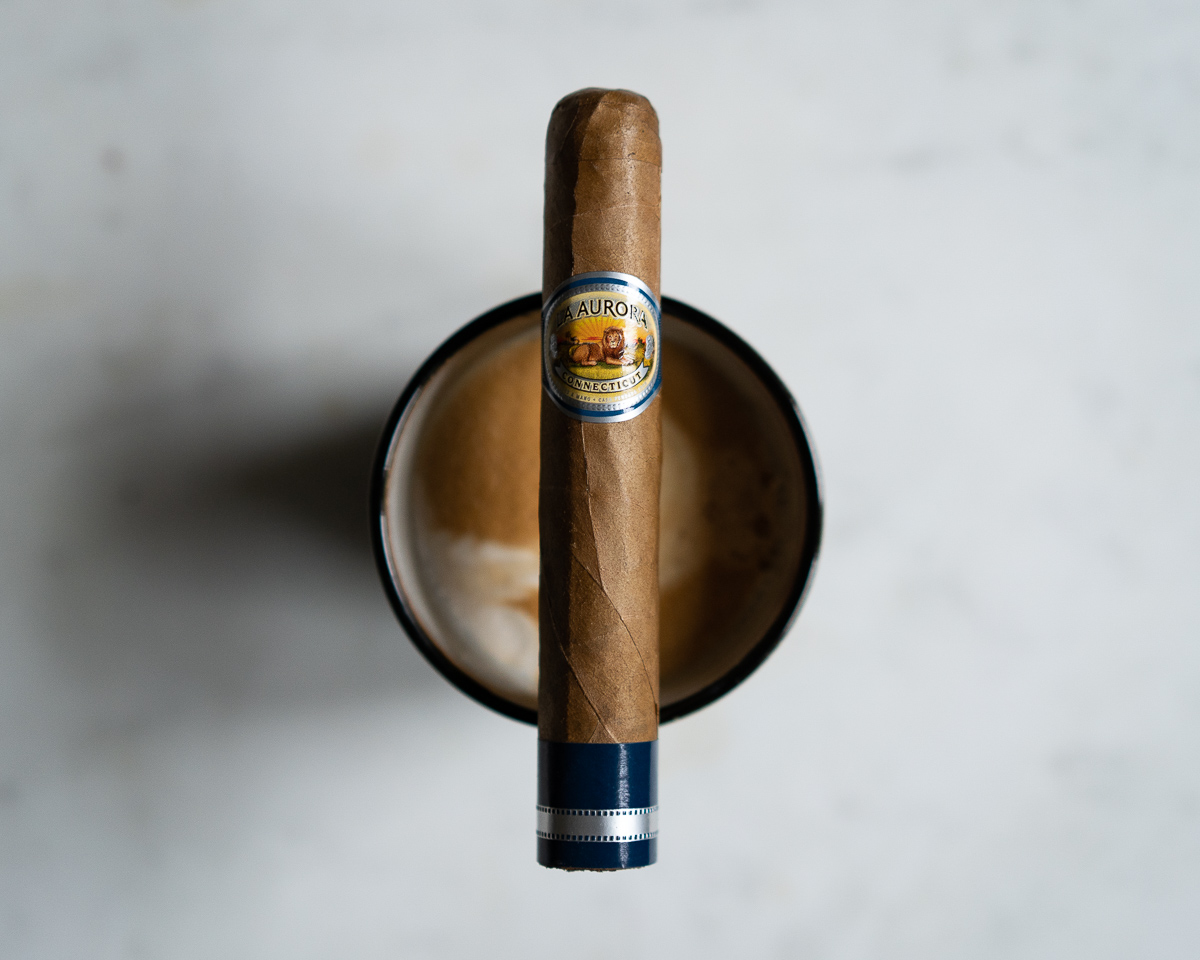 While I worked through the second half of the La Aurora, I noted how well the burn formed and showed a light gray ash. Midway, vanilla bean and butter coated the palate. Toasty tobacco notes with slight mint came through as the La Aurora progressed which was somewhat refreshing for me. Malt and cashew rounded out the finish at this point.

The turn at the last third of this smoke remained toasty and sweet. Vanilla extract steadied on the tip of the tongue with oak on the back end.  The last few puffs of the La Aurora were a bit green showing possibly inadequate aging of the tobacco. The finish also became bitter which hurt the end of this cigar.

Back in the “Cigar Boom” days, mild to medium cigars where more prevalent. The La Aurora Preferidos Sapphire Connecticut Robusto harkens back to those days. This La Aurora demonstrates what a Connecticut wrapper tastes like in a blend, and it was pleasant to return to that style. My only issue was on the finish which turned a bit green and bitter. I know these blends spend less time aging to keep the medium profile, but being rolled in such a limited fashion, the quality control in the processing needs to be adhered to as well. If you were around during the cigar boom the La Aurora Connecticut 1903 Edition will bring you back to that milder style and if you weren’t this will give you an education on what was being smoked during the time.

Reviewers note: this was a non-blind review.

Christian offers a perspective of cigars ranging from vintage pre-embargo smokes, hard to find cigars as well as current releases. His 22+ years of smoking and love of travel have taken him on cigar journeys here and abroad. From smoking HERF’s in friends backyards to smoking Montecristo No. 2s on the terrace of the Hungarian Palace Hotel in Lido Italy, Christian takes the “everyman” approach to cigar smoking being it all about taste and enjoyment of where you are or who you are with.
« Gran Habano Blue In Green Gran Robusto Review» Campesino Reserva Del Padre Review