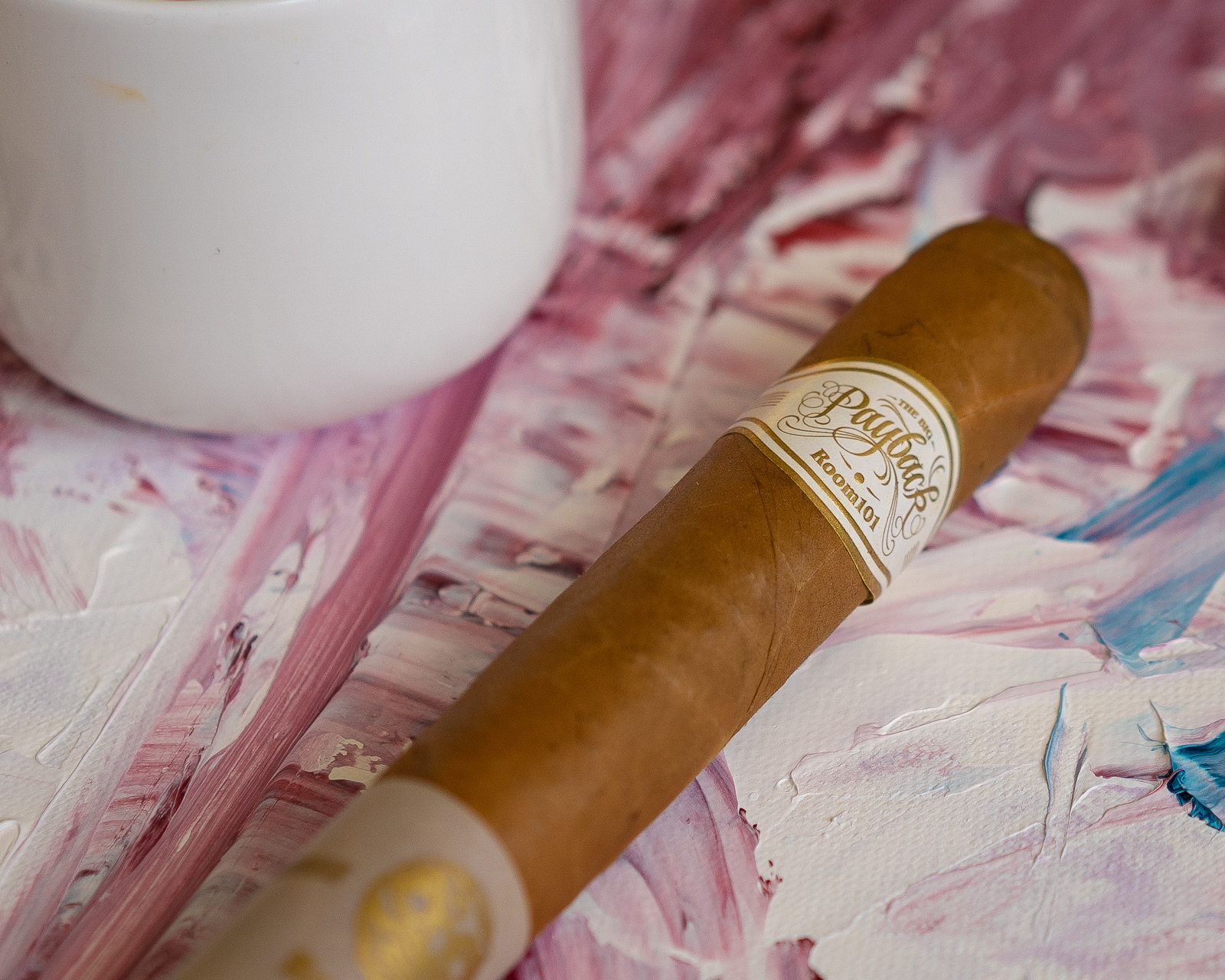 Up for review today is a discontinued line from Matt Booth and Room101 called “The Big Payback.” I actually wasn’t aware of the cigar in its hayday, but my friend (and FTNYC event regular) Kevin generously gave me one of his last singles to review. Thanks Kevin!

Though currently unavailable, The Big Payback Connecticut was produced in three sizes:

According to Halfwheel, the origin of the colorful name is Matt Booth’s desire to give back to his loyal customers by producing an excellent cigar at value prices (between $5 – $7).

Let’s see if he delivered. 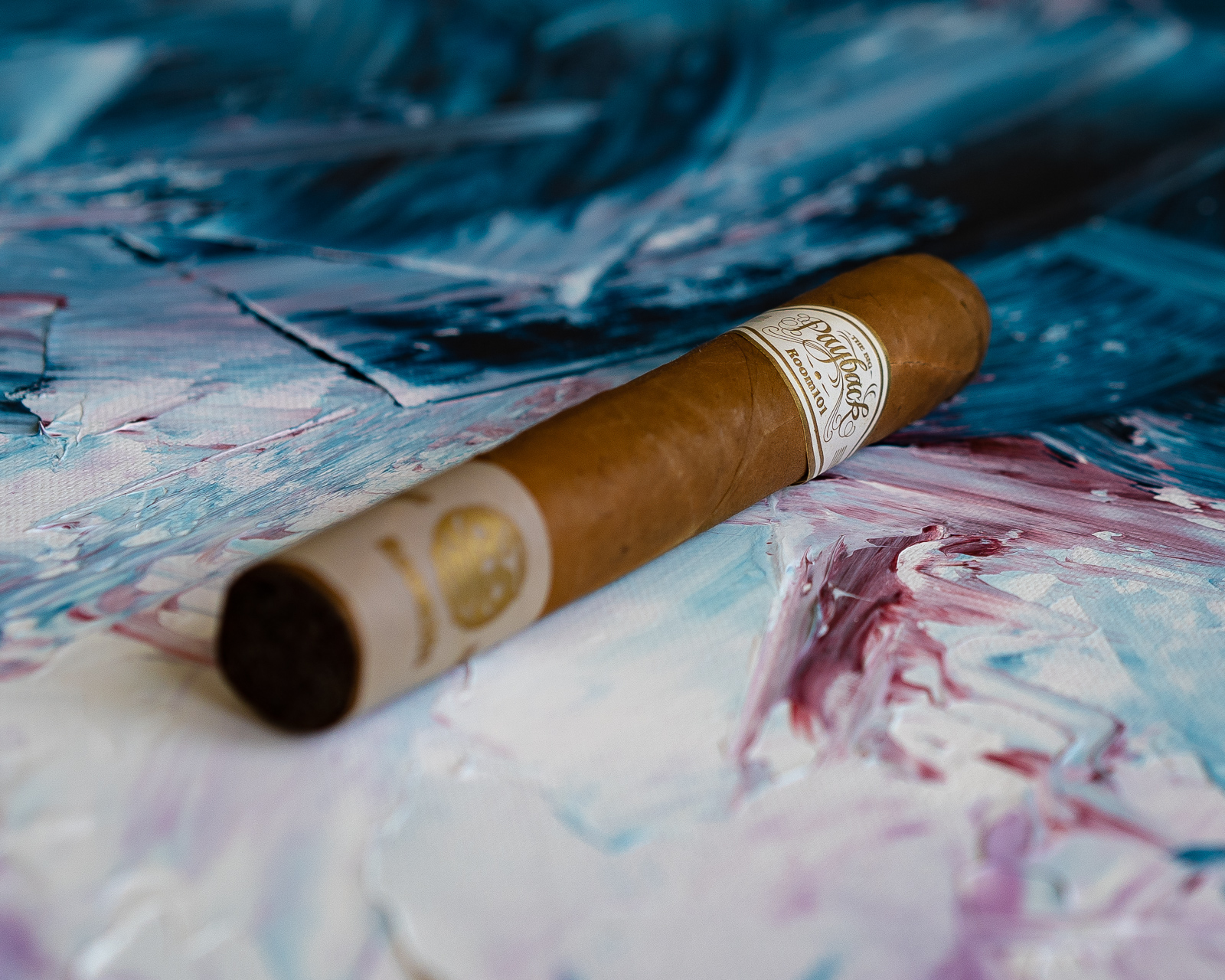 As you can see from the photos, Room101 is led by a man who knows how to brand a product. The lightness of the Ecuadorian Connecticut wrapper complements the gold detailing on the white band, giving the cigar a classic look. The wrapper is mostly smooth, with a two significant veins popping behind the band. When squeezed, the cigar is decently spongy and seems to be packed consistently the length of the cigar.

Smelling the foot of the cigar, I pick up a hefty amount of sweet hay, light cedar, and thick cream. There’s also a decent amount of a very fine spice that I’m not entirely sure how to describe. After cutting using a (large) straight cut, I test the draw which is a bit too loose, about a 4/10 in terms of amount of restictiveness. We’ll see if that becomes an issue later. On the cold draw, there’s a decent amount of spice that lingers on the cold draw, along with some dry cedar.

The Room101 Big Payback opens with with mild to medium bodied smoke that is big in flavor and toasty in texture. Smoke production is fantastic (as you’d expect with such a free draw), with the cigar delivering large plumes of silky-white smoke. Flavor-wise, the smoke primarily hits bitter, with a touch of salt and sweetness in the aroma. Notes include heavily toasted bread, bitter wood, lots of kitchen spices, minerals, and just a touch of creaminess that coats the palate. The retrohale is surprisingly strong, consisting mainly of white pepper and cedar.

At an inch in, the ash on the Big Payback is holding surprisingly strong given the large ring gauge. The spice–enjoyable as it was–has drawn down nicely, though it is still present. Additionally, the bitter flavors have been replaced by a more assertive sweetness. Flavors at this point include cinnamon toast, baking spices, light nuttiness and cream on the finish. 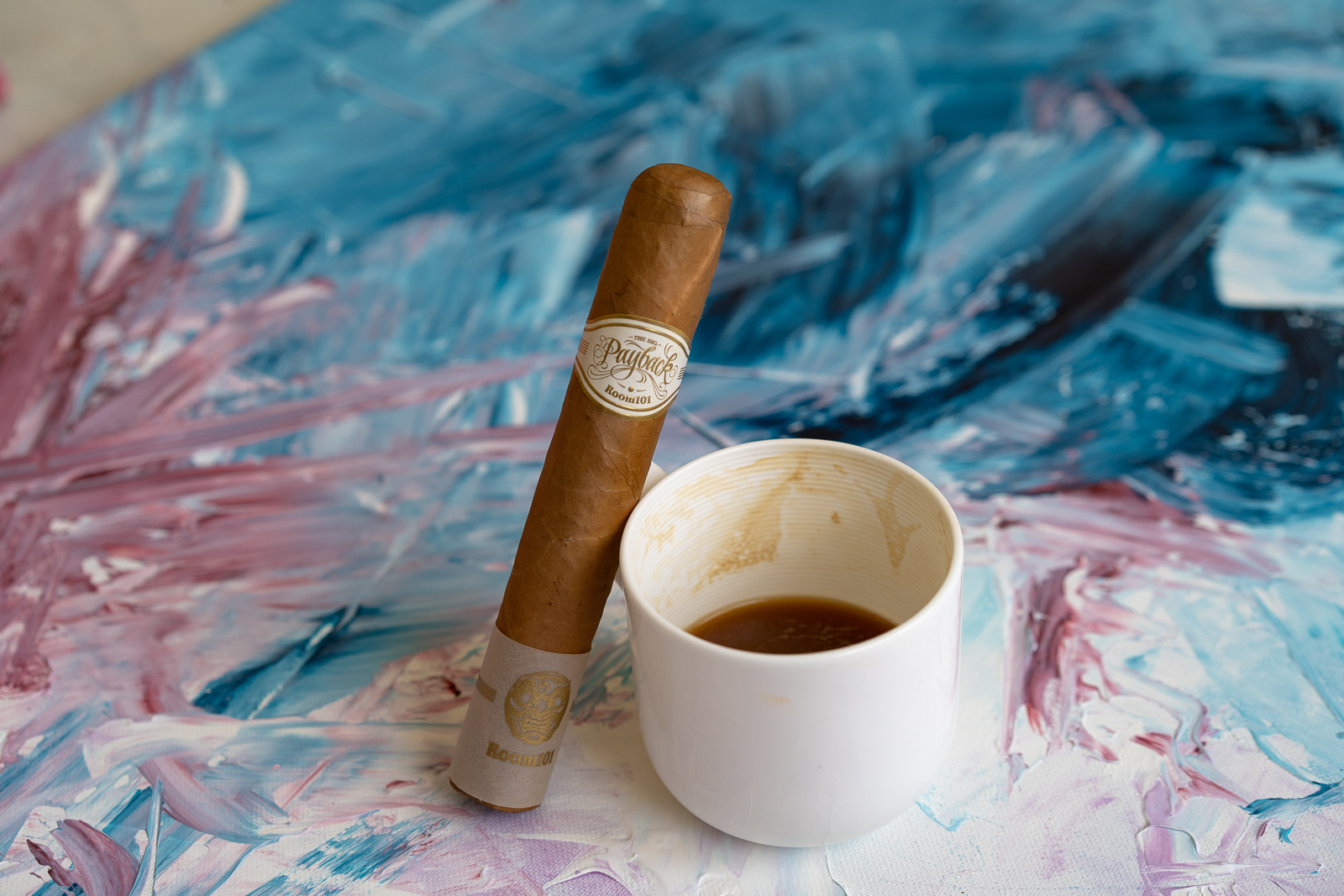 In the second third, the body and strength settle down a hair below medium. The texture of the smoke is a bit less toasty and more silky. That toasted bread note shifts towards something resembling vanilla cake, which is layered on top of creamy cedar, baking spices, and a very slight floral note. The retrohale is still at medium, with no change in flavor. Construction wise, the Big Payback continues to perform excellently, with a straight, razor sharp burn. Smoke production is still great, and the temperature of the smoke remains cool.

The final third of the Big Payback is a natural extension of the first two, with the smoke settled fully on a smooth, creamy texture. The flavor profile showcases vanilla cake, salted peanuts, and a healthy dose of white pepper in the aroma. Big Payback continues this way until the end, thankfully avoiding the high heat and overly bitter experience that characterizes the end of so many Connecticut blends.

I was pleasantly surprised by the Room101 Big Payback Connecticut. I was expecting a flavor profile that was too diluted by the 60 ring gauge. What I experienced instead was a flavorful, complex, mostly balanced experience with great construction. This cigar is worth pursuing if you can find it, and a quick google search shows some online retailers still have it in stock at the time of this writing.

Brand evangelist, digital marketer, cigar and spirits expert specializing in consumer tasting and educational events. Matthias made the long trek from his hometown of Portland, Oregon to New York City in 2007, and in nine years has hosted more than 120 events and helped promote and launch dozens of cigar and whiskey brands in the U.S. In 2016, he joined the Cigar Journal Tasting Panel, blind-reviewing pre and new release cigars.
« Trinidad Santiago Review» Montecristo Nicaragua Series Robusto Review