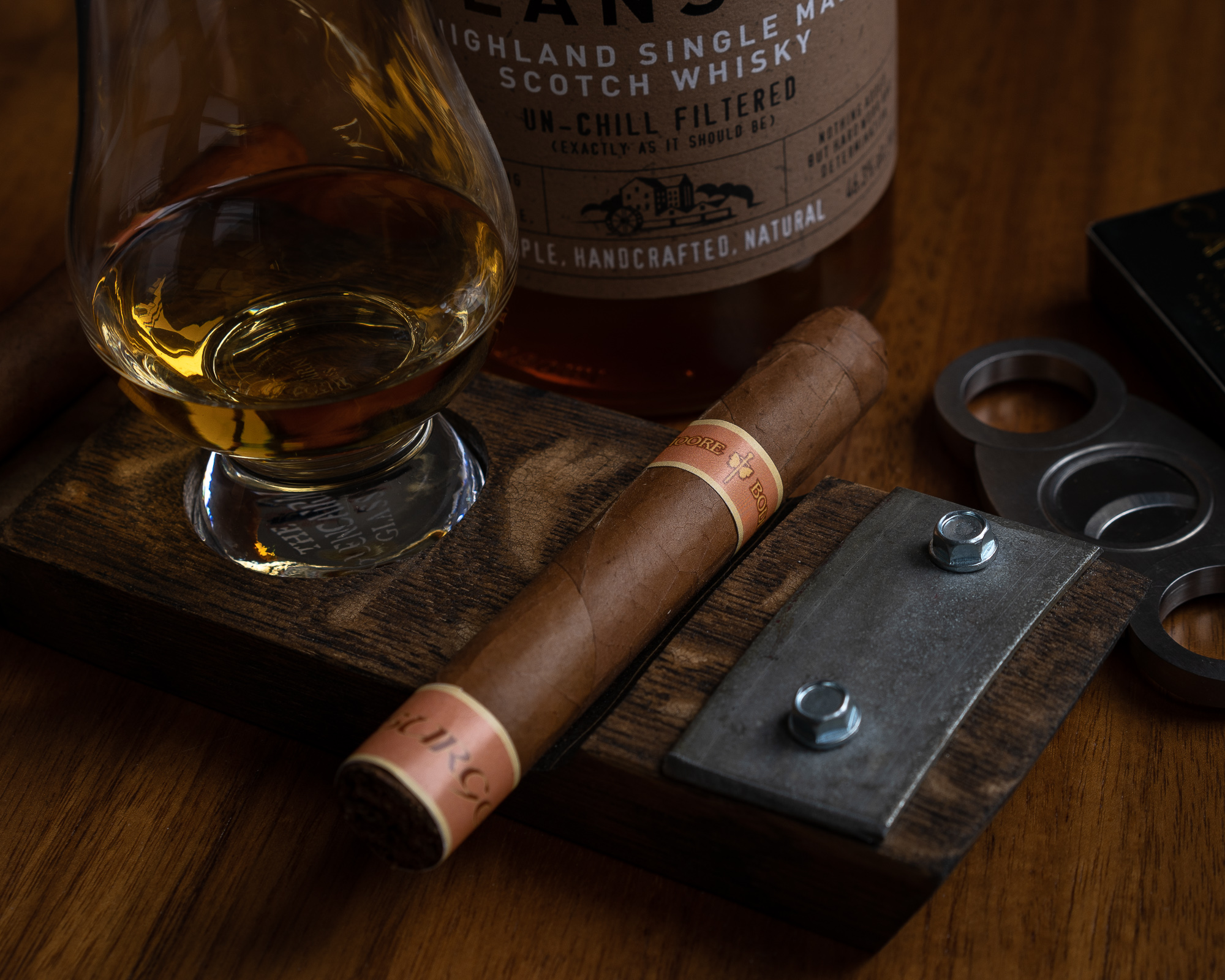 Moore & Bode Cigars have been around since 1990 based in Miami. Independently owned, the company has been producing cigars from around the world and is currently sourcing tobacco from locations such as Asia, India and South America. While not disclosing specific regions or farms, Moore & Bode seeks to find unique flavors and quality tobacco.

I’ve only smoked the Classic line which I enjoyed for its mild complexity. With that experience I was looking forward to a fuller flavored blend in their “Surge” cigar. 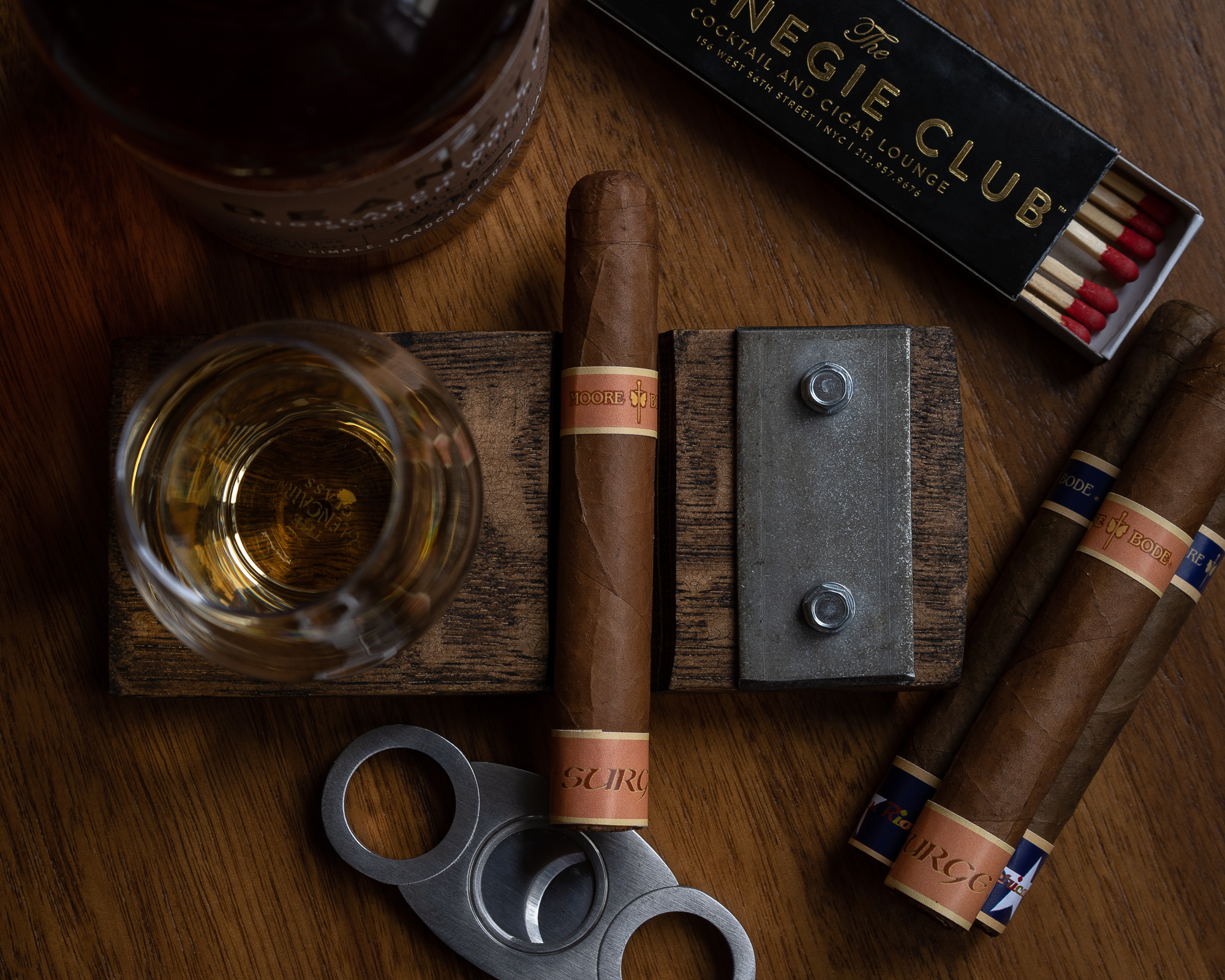 The Moore & Bode Surge sports a milk chocolate wrapper with minimal veins. Its semi firm to the touch save for a soft spot at the foot. The band is a standout orange with cream lines a top and bottom with the Moore and Bode logo on it. There’s a secondary band at the foot in the same coloring with the word “Surge” on it. The cigar is well crafted and the roll spot on.

After using a straight Xikar cut, I toast the Surge and with the first few puffs comes a blast of spice that tingles all over my palate and enlivens the senses. The Surge certainly lives up to its name, greeting you with a “surge” of power upfront. On the retrohale, there’s lots of cedar along with pepper.  As the cigar progresses, sweetness and coconut begin developing on the palate. Then, the Surge turns a bit creamy, with copious amounts of smoke. Thus far the flavors of the Moore & Bode Surge are quite enjoyable.

During the second half of the Surge, I pick up some sour cherry and candy notes. Construction here isn’t flawless: the cigar develops a white, flaky ash and ends up needing a relight. A few puffs later, the sour cherry notes give way to a cinnamon and sugar note that creates a sweet sensation on the tongue. The retrohale, on the other hand, brings up some earthiness with a sweet and savory finish on the palate.

The last third requires another relight and the burn becomes uneven. The cherry flavors continue with added vegetal notes. And, what was once earthiness becomes a distinct grassy note, with a bit of harshness despite a slow burn. Graphite dominates the mouthfeel in the last inch or so, and I’m met with another swath of bitterness. At this point the profile turned and I let the cigar put itself out to conclude the smoke.

The Moore and Bode Surge delivers power, with spice to start, helping it live up to its moniker. The transition from spice to sweet and cinnamon was pleasant and the savory notes when they appeared were wonderful. The Surge lost it a bit on the last third with some vegetal and grassiness that were off-putting.

Overall the quality of tobaccos were there and being able to taste what nontraditional countries are producing is quite an education. I recommend picking up a few to smoke and age and see how this blend progresses. The ability to smoke a cigar and understand the flavors of tobaccos grown all over the world is an experience an aficionado should take advantage of.

Moore & Bode are showing what thinking outside the usual realm of tobacco countries can produce.

Christian offers a perspective of cigars ranging from vintage pre-embargo smokes, hard to find cigars as well as current releases. His 22+ years of smoking and love of travel have taken him on cigar journeys here and abroad. From smoking HERF’s in friends backyards to smoking Montecristo No. 2s on the terrace of the Hungarian Palace Hotel in Lido Italy, Christian takes the “everyman” approach to cigar smoking being it all about taste and enjoyment of where you are or who you are with.
« All Out King’s Give Me Your Lunch Money Review» The Tabernacle Robusto Review