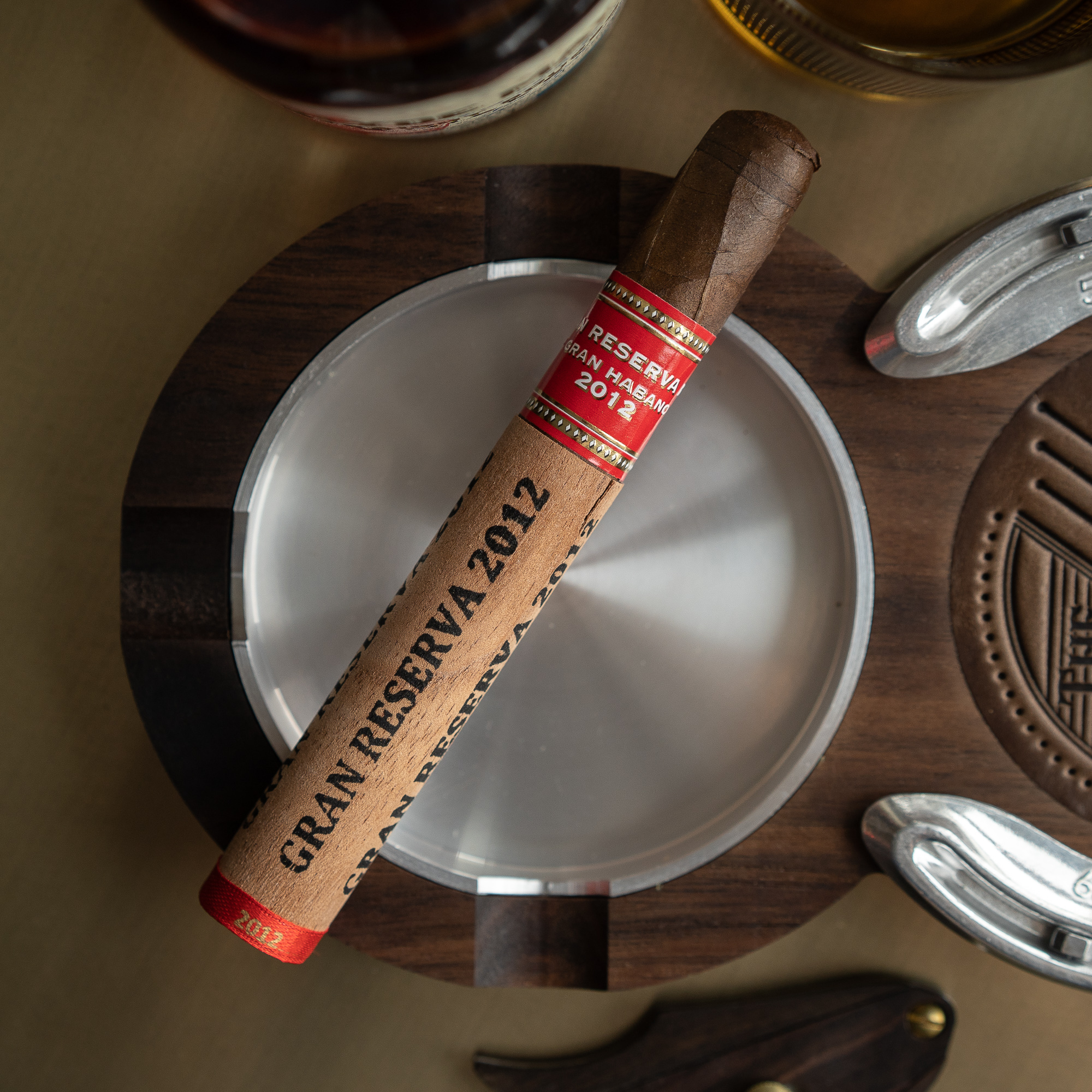 George A. Rico of Gran Habano has been blending cigars in his Honduran factory for years using high quality tobacco from a number of countries and developing many unique and stylish blends. His Gran Habano Gran Reserva Corojo No. 5 is rolled in Honduras and uses a Nicaraguan wrapper and binder with a Costa Rican and Nicaraguan filler leaf. The size for this review is the new corona gorda, which I really enjoy as I feel the vitola is excellent to showcase flavors with.

We shall see how this cigar measures up. Enjoy! 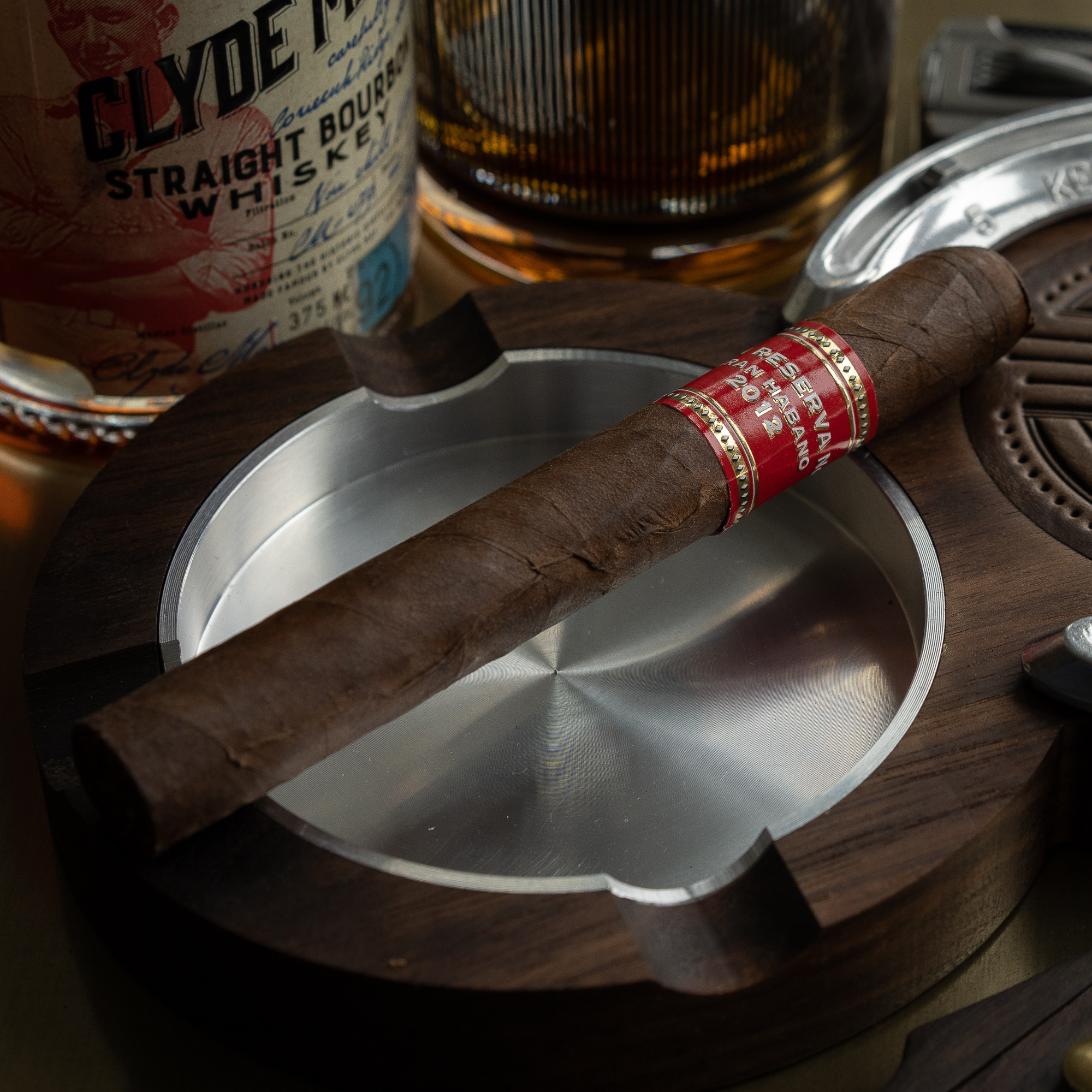 The Gran Habano Corojo #5 Gran Reserva 2012 Corona Gorda has an appealing though not overly creative red and gold embossed band supporting the top and bottom with the words “Gran Reserva” and “Gran Habano 2012” in the middle. The cigar is encased in a cedar sleeve with a secondary band at the foot with “2102” printed on it. Trying to remove the sleeve proves difficult and it seems basically sutured on. I have to tear at the bottom of the secondary band and pull apart the tape attached, then break apart the cedar to undress the cigar. A bit much.

Once removed, I find a semi dark wrapper with minimal veins and an oily sheen to it. There are significant soft spots up and down the cigar to the touch when pressed.

With my Wooly Mammoth Xikar cutter, I make a straight cut to the cap of the cigar. I take a dry draw and the taste of must and oak are prevalent. As I light the Corojo #5, the first few puffs are of maple and oak. The sweetness of the maple and wood notes play well on my palate. There’s a bit of hay on the retrohale with some bitter undertones. As the cigar develops, flavors of graham cracker and cinnamon came on strong, and the cigar is on the mild to medium bodied side. 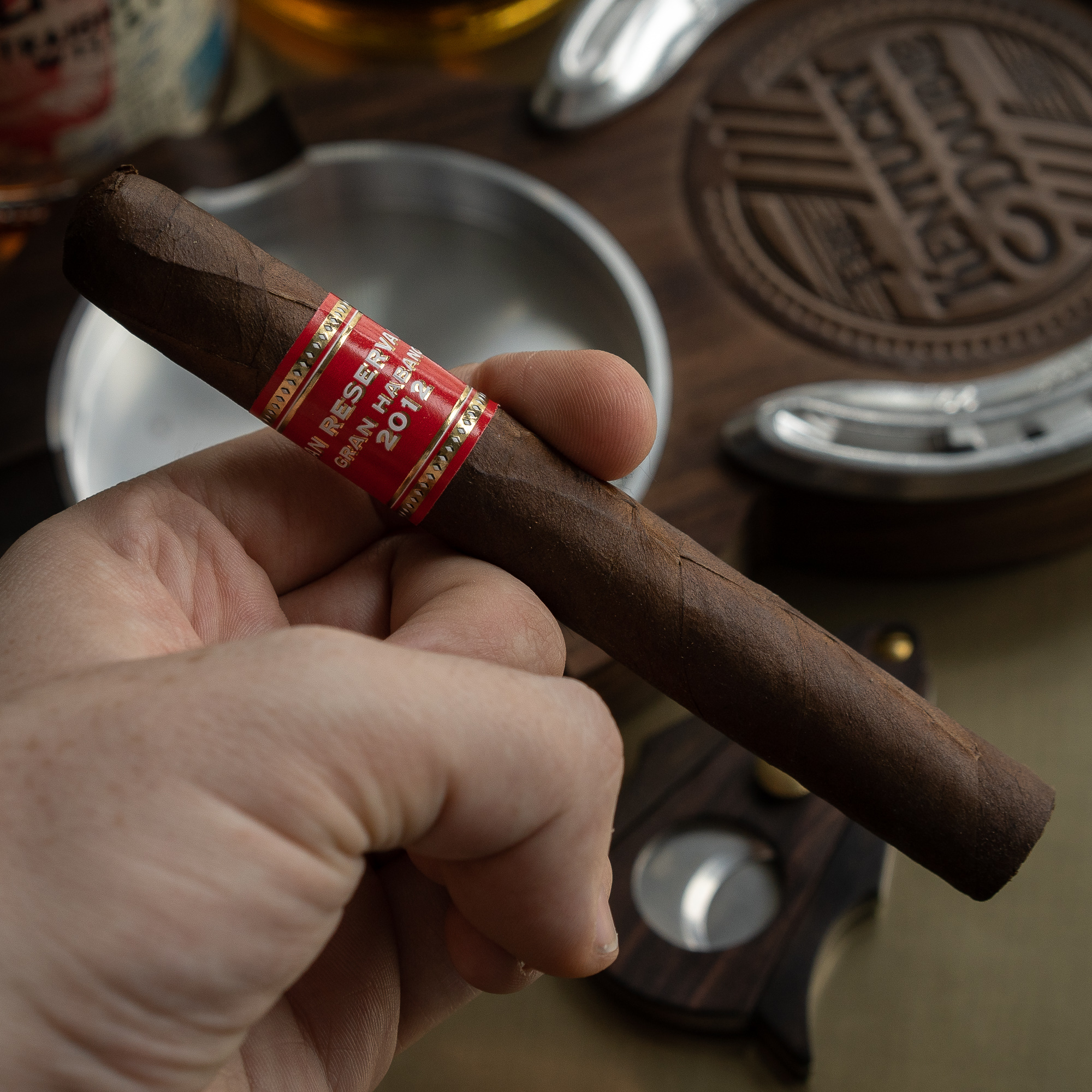 The Gran Habano #5 develops bitter notes as it reaches the midway point. The ash is gray and flaky, falling apart several times during the smoke. After several more puffs, coconut coats the palate with bing cherry on the finish. The cigar requires a relight upon which oak flavor starts to dominate. I take another retrohale, and cedar and balsa wood resonated in the back of my mouth. The cigar then becomes linear in flavor for the better part of the second half of the smoke.

Gearing up toward its end, the Gran Habano #5’s wood notes give way to a sudden creaminess that becomes almost buttery. This is an overwhelming although not an unpleasant taste profile. Along with cream, a vanilla sweetness creeps up that quickly dissipates to a bitter finish. At this point the Gran Habano goes out and since it’s toward the end the option to relight does not feel necessary.

I’ve smoked a lot of cigars from George, with some really grabbing me with lots of complexity and flavor, and some a bit one dimensional. I would say the Gran Habano Corojo #5 Gran Reserva 2012 Corona Gorda is somewhere in the middle. It started off as a flavorful medium bodied cigar with maple, oak, cinnamon and graham cracker but then the overwhelming wood flavors coupled with some bitterness hurt the experience.

For the most part I enjoyed the taste profile although the cigar could’ve been more balanced for me.

Christian offers a perspective of cigars ranging from vintage pre-embargo smokes, hard to find cigars as well as current releases. His 22+ years of smoking and love of travel have taken him on cigar journeys here and abroad. From smoking HERF’s in friends backyards to smoking Montecristo No. 2s on the terrace of the Hungarian Palace Hotel in Lido Italy, Christian takes the “everyman” approach to cigar smoking being it all about taste and enjoyment of where you are or who you are with.
« Perez-Carrillo Encore Valientes Review» Padron Family Reserve 50 Years Maduro Review