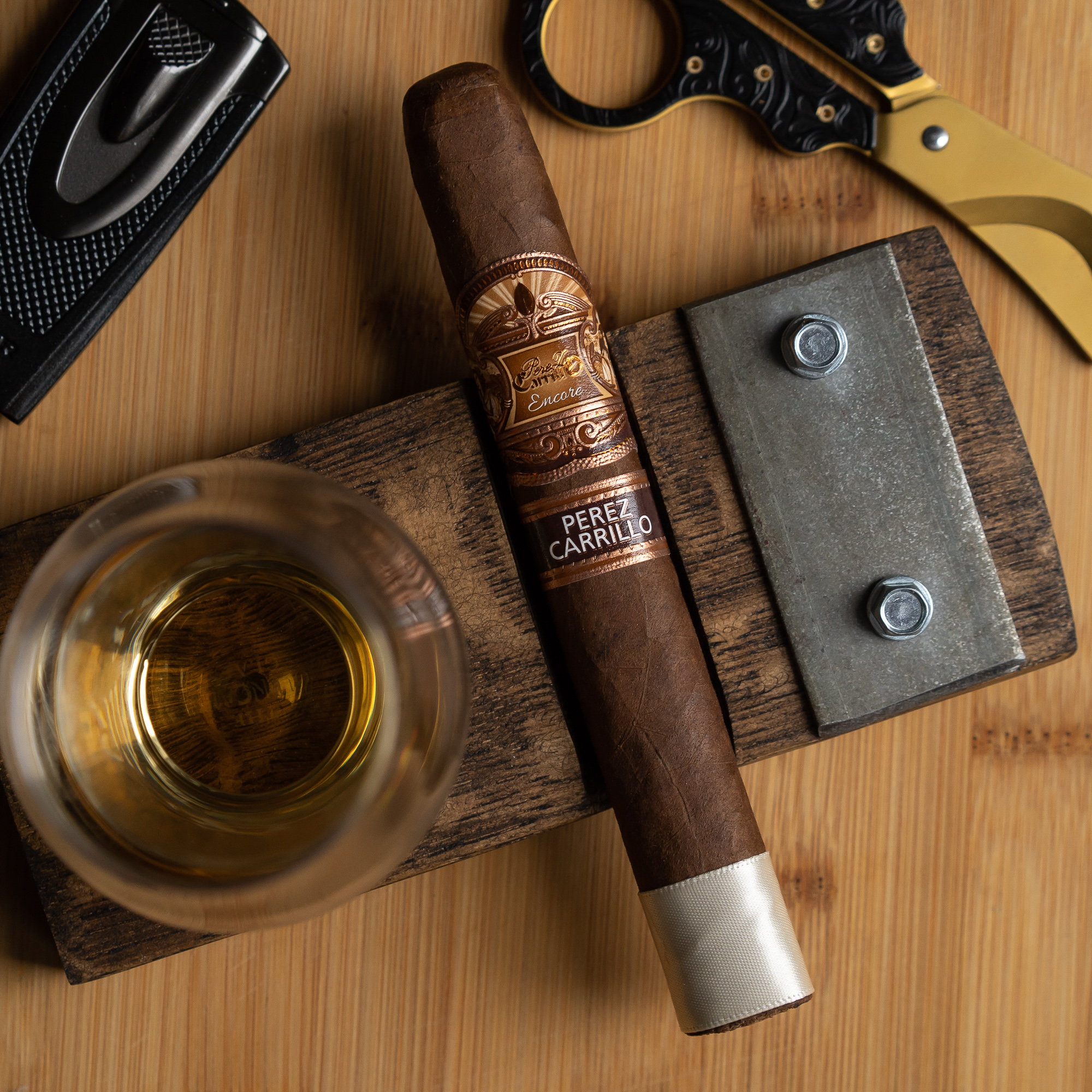 I smoke a lot of cigars every year. Almost 100 cigars reviewed, and a few more outside of the reviews. That means smoking some really great cigars, and some not-so-great cigars. So I’m always excited to smoke a blend that received scores like the Cigar Aficionado 96-rated Perez Carillo Encore.

Although EP Carrillo is a well-established cigar company with popular blends like the “Inch,” it isn’t a brand I’ve had a ton of exposure to. So here’s to smoking something new and finding out how it performs.

The Perez Carrillo Encore Valientes is a meticulously branded cigar, with ornate double banding, a rich gold color palette, and white foot band. The outer Nicaraguan wrapper has a couple of minor veins but is otherwise flawless. On closer inspection, the cigar seems strangely lightly packed, with a lot of give when squeezed even lightly. We’ll see how that affects combustion and smoke production.

Off of the foot, I pick up whiffs of cashews, baking spices, and light woody aromas. The cold draw is sweet, with granola, oats, and touches of spice. 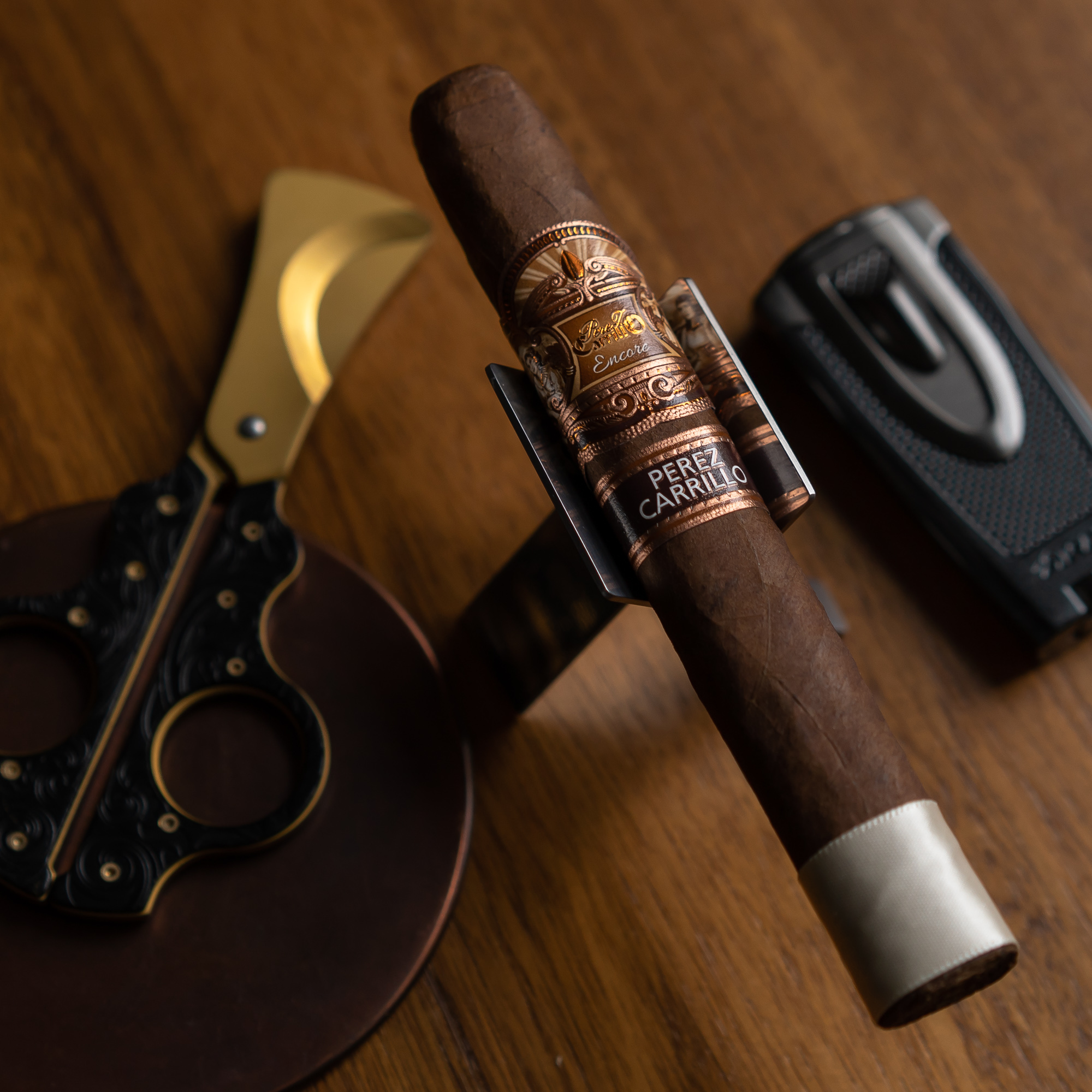 Ones fully lit, the EP Carrillo Encore Valientes produces copious amounts of toasty, medium-bodied smoke. There’s a decent amount of generic spiciness up front, followed by a core of sweet woodiness and a buttery finish. Before too long, a nice vanilla apricot note sneaks in on the palate, with the spice building more and more on the retorhale. Overall, it’s a start that seems to emphasize the sweet, savory, and spicy flavory categories most, though the wood does contain some noticeable bitterness.

By about an inch in, the cigar is having some trouble staying lit, requiring me to puff a bit faster on average than I’d like to. Probably the result of the cigar’s light packing. Otherwise, the draw is good, and a salt and pepper ash that hangs for an inch plus and a straight burn line.

Heading in to the second third of the EP Carrilo Encore, the cigar is even toastier than before, resembling toasted cinnamon bread. Unfortunately, it’s also at the beginning of the second third that the construction issues begin to emerge more noticeably. The burn strays significantly, requiring a few purges and then a touch up to correct. Otherwise, the flavors continue to develop, with a subtle cocoa note hitting that palate that’s quite enjoyable. As nice as the flavor development is, its continually sabotaged by the speed that I have to puff to keep the cigar fully lit, leading to overly heated smoke and likely more strength than intended.

Unfortunately, the race to keep the EP Carrillo Encore lit continues well into the final third. Still, the cigar manages to remain quite enjoyable, which is a testament to the quality of the tobaccos and the blend itself. The baking spice that characterized the first half of the cigar shifts to something a bit more savory, more along the lines of cooking spices. Other notes include earth, toasty cedar, red pepper, and some cream in the aroma. The cigar continues along in this fashion up until the end, when the smoke heats up too much to continue on.

The EP Carrillo Majestic Valiente has a lot going for it. A great combination of flavors, good smoke production, and an easy draw. But construction issues ultimately got the better of it, with the light packing requiring the cigar to be smoked too fast to fully enjoy.

Still, construction is easily the most variable part of any cigar. They are hand made after all. So I still recommend giving this smoke a try, if only for the fact that it claimed Cigar Aficionado’s #1 cigar award of 2018, albeit in the Majestic size (something closer to a robusto).

Brand evangelist, digital marketer, cigar and spirits expert specializing in consumer tasting and educational events. Matthias made the long trek from his hometown of Portland, Oregon to New York City in 2007, and in nine years has hosted more than 120 events and helped promote and launch dozens of cigar and whiskey brands in the U.S. In 2016, he joined the Cigar Journal Tasting Panel, blind-reviewing pre and new release cigars.
« Casa by Caldwell CdM Exclusive Review» Gran Habano Corojo #5 Gran Reserva 2012 Corona Gorda Review