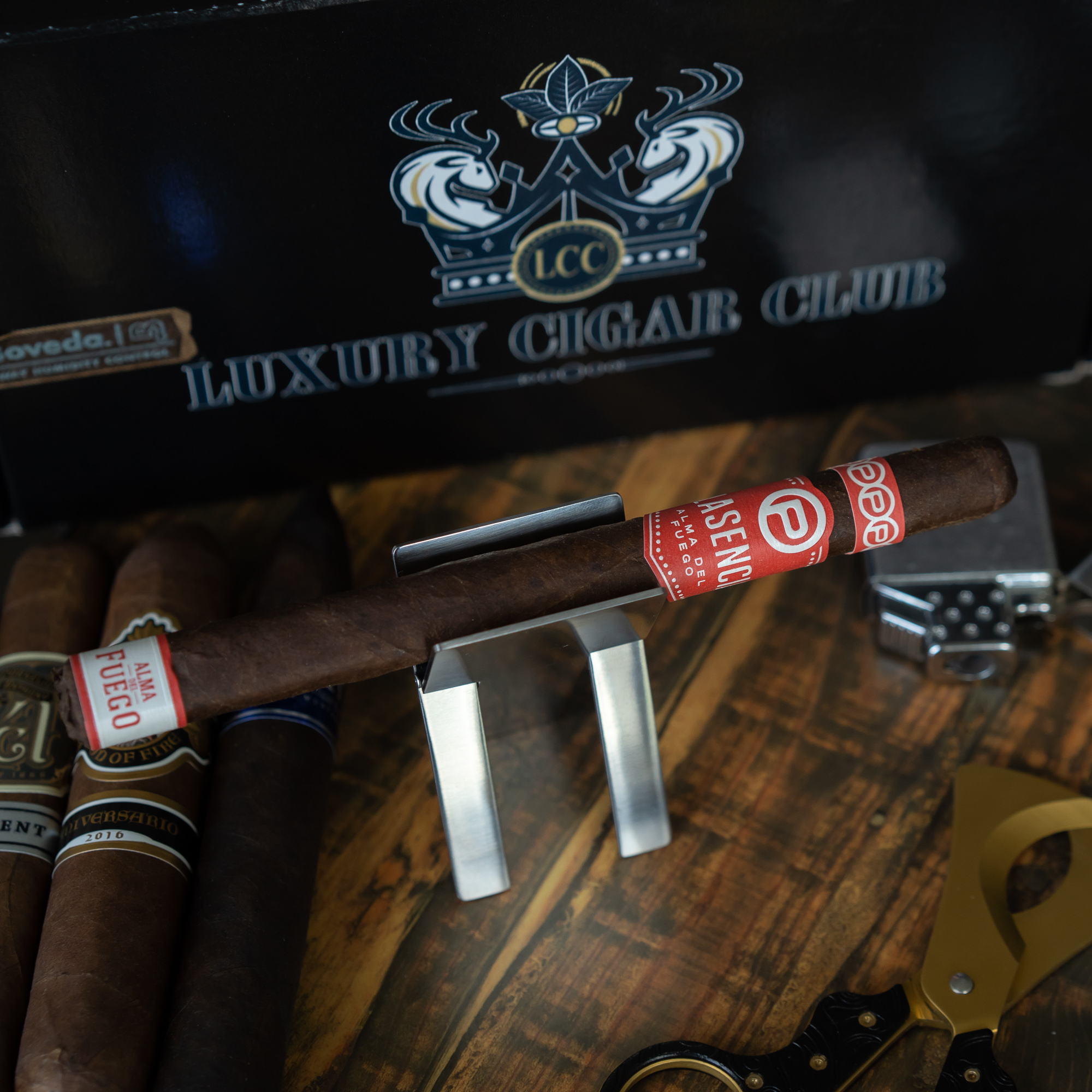 Man, Plasencia Cigars has been on a roll in 2019. Not only have they continued to expand their self-branded cigars with blends like the one up for review today, they’ve also had a series of big hits with collaborations on blends for Montecristo, Trinidad, and (coming soon) RyJ.

All that to say, that’s why I was so excited to get to review the new Plasencia Alma del Fuego panatela which arrived in my monthly Platinum Box from Luxury Cigar Club. I just had to know if the new release could live up to the reputation developed by the Alma del Fuerte.

The Plasencia Alma del Fuego is visually striking, with three total bands: two near the cap and one on the foot. The red and white color scheme is eye catching, as is the flat design approach of the overall asthetic. The outer wrapper on the other hand is positively rustic, with some very noticeable veins as well as some visible inconsistencies in the shape of the cigar. 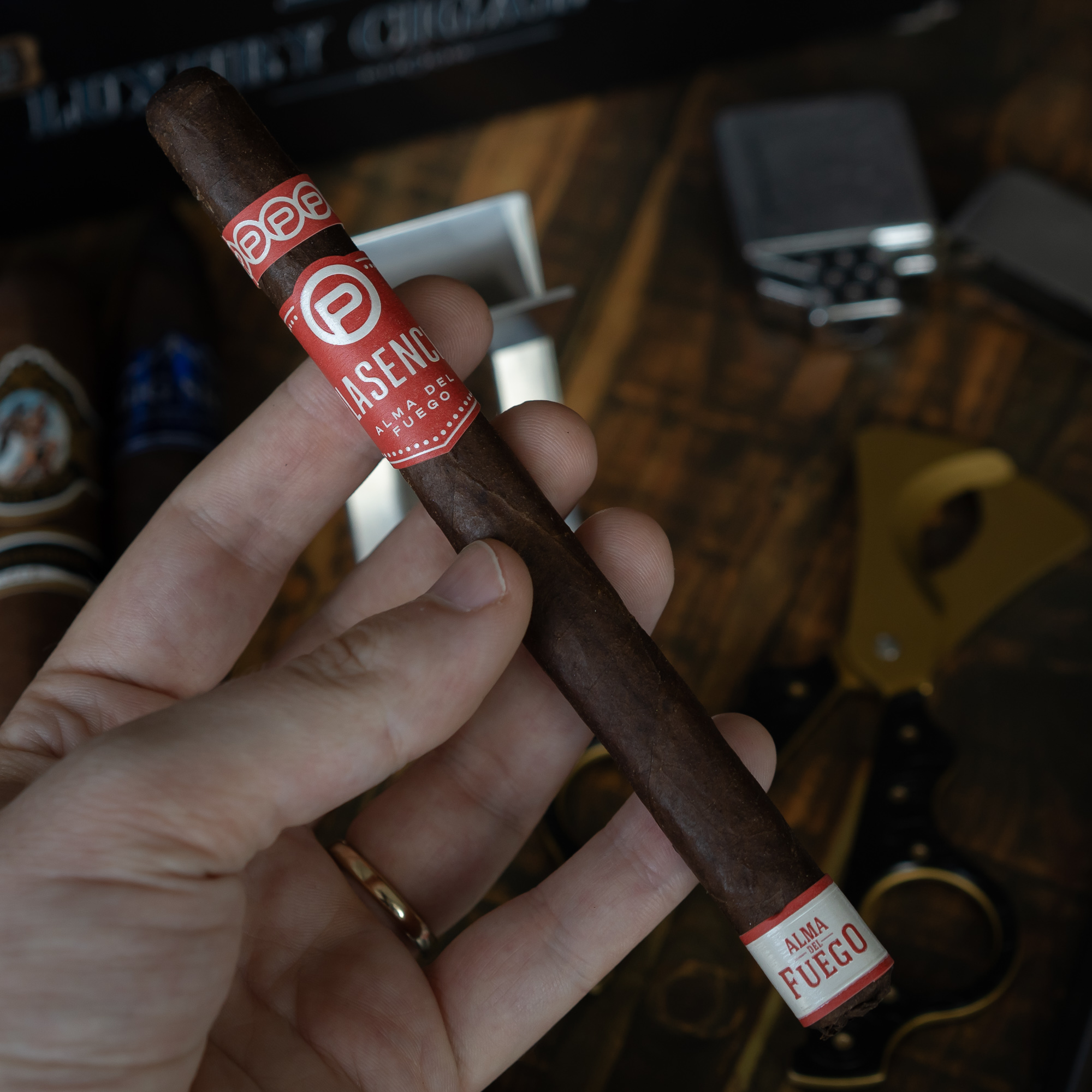 When squeezed gently, the cigar has a bit of give that is consistent down the length of the cigar. The draw is ideal, about a 7/10 in terms of restrictiveness though I’m not sure what will happen once the closed foot opens up. The cold draw is a mix of cooking spices, toasted bread, and sweet coffee.

Once lit, the Plasencia Alma del Fuego opens with hearty, medium bodied smoke that contains notes of hot spices, vegetal, white pepper, coffee, and a sweet floral flavor. Overall, the smoke is balanced between spicy, bitter, and sweet flavor categories. The retrohale mirrors this experience. Like the wrapper, a very rustic smoking experience. Smoke production is on point, and the smoke, though spicy, is cool. It’s an excellent start and a flavor profile I can’t say I’ve experienced before, which is awesome.

The first ash holds for more than an inch and a half, with a mostly straight burn. Here the balance shifts more toward the spicy end of the spectrum and the smoke hits the tip of the tongue hard. The profile is a mix of charcoal, black and cayenne pepper, oak, and a funky vegetal note that would likely be awful on its own but is great next to the other flavors. Good complexity.

In the second third, the strength and body start to creep up into the medium plus range. The funky vegetal note takes the spotlight, at times becoming a bit overly aggressive but still very enjoyable. At the same time, some cocoa and cream notes sneak in, balancing the spicy and bitter notes well. Interestingly, the sweeter notes also find their way into the retrohale, which is smooth and rich with notes of finely ground black pepper and cocoa. Throughout the second third, construction is effortless: a great burn, excellent smoke production, and a well structured ash. Excellent.

In the final third of the Plasencia Alma del Fuego panatela, the flavors start to condense, with strong notes of charred cedar planks, espresso and cooking spices. It isn’t nearly as complex as the first two thirds, but it is a fitting conclusion. Construction never wavers, and the smoke only heats up in the last inch.

I was really looking forward to smoking the Plasencia Alma del Fuego because of my love for the Alma Fuerte. However, I wasn’t prepared to like the Alma del Fuego even MORE than the Fuerte.

It’s a cigar that carves out an entirely new flavor profile full of robust pepper, smoked meats, charred wood, and vegetal on one side and coffee, cocoa and cream on the other. Even more impressively, the balance of flavors shifts throughout, making it a riveting cigar to smoke and a likely contender for our Top 10 of 2019 list.

Go buy this cigar. I suggest spending some time alone smoking it so you can get the full experience.

Brand evangelist, digital marketer, cigar and spirits expert specializing in consumer tasting and educational events. Matthias made the long trek from his hometown of Portland, Oregon to New York City in 2007, and in nine years has hosted more than 120 events and helped promote and launch dozens of cigar and whiskey brands in the U.S. In 2016, he joined the Cigar Journal Tasting Panel, blind-reviewing pre and new release cigars.
« Viaje Hamaki Omakase 2019 Review» Montecristo Espada Oscuro Review