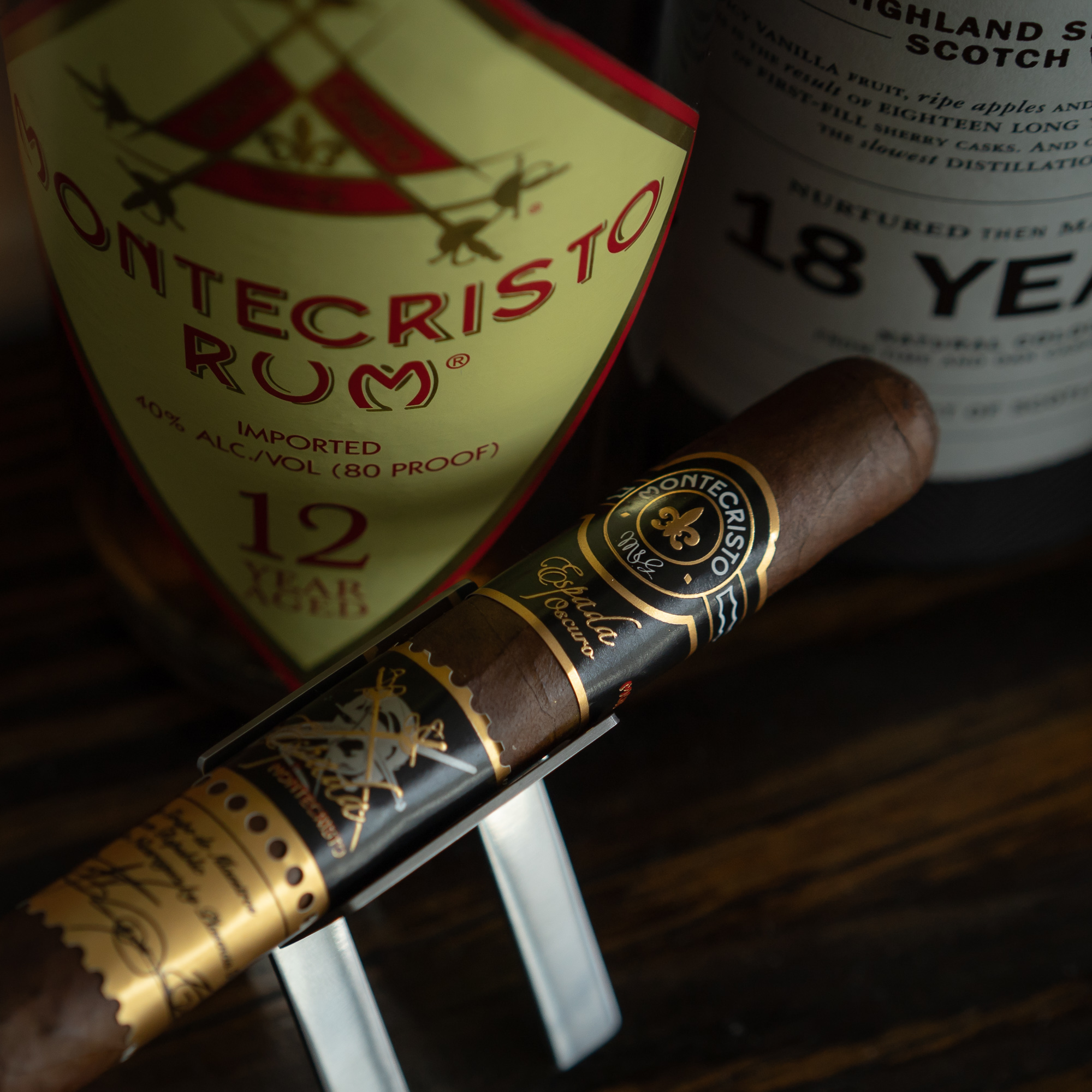 Here’s what Eddy Guerra, Sr. Brand Manager at Altadis had to say about the Espada Oscuro:

So let’s get to it and see if the Oscuro can live up to the Espada’s well-earned reputation.

First, the look and feel. The Montecristo Espada Oscuro comes presented in a sleek double banding that features a dominant black and gold color palette. Near the bottom of the large secondary band is a note that reads “Blended by Grupo de Maestros in Dominican Republic and made in Nicaragua by Plasencia Family.”

Removing the bottom band reveals the dark, oily oscuro wrapper which has minimal veins, an oily texture, and one water mark which you can see on the photo below. After clipping the cap with a straight cut, the pre light draw is fairly unrestrictive (about a 6/10 in terms of amount of restrictiveness). The cold draw releases flavors of citrus, cocoa, barnyard, and some hay. Taking a whiff off of the foot of the cigar summons strong and cool notes of cedar, coffee, cocoa, Cognac and stone fruits.

Once lit, the Montecristo Espada Oscuro produces thick, rich smoke that has a spicy texture and a largely sweet, creamy flavor. What I really love about the opening is, despite featuring a wrapper not typically found on Montecristo cigars, I can still clearly sense the cedar and floral notes that I associate with other Montecristo blends. As the cigar progresses to about a half inch in, a bitter black coffee note hits the palate, balancing well against the spicy and sweet components of the smoke. Strength wise, I’d put the beginning of the cigar at medium to full in body and strength. 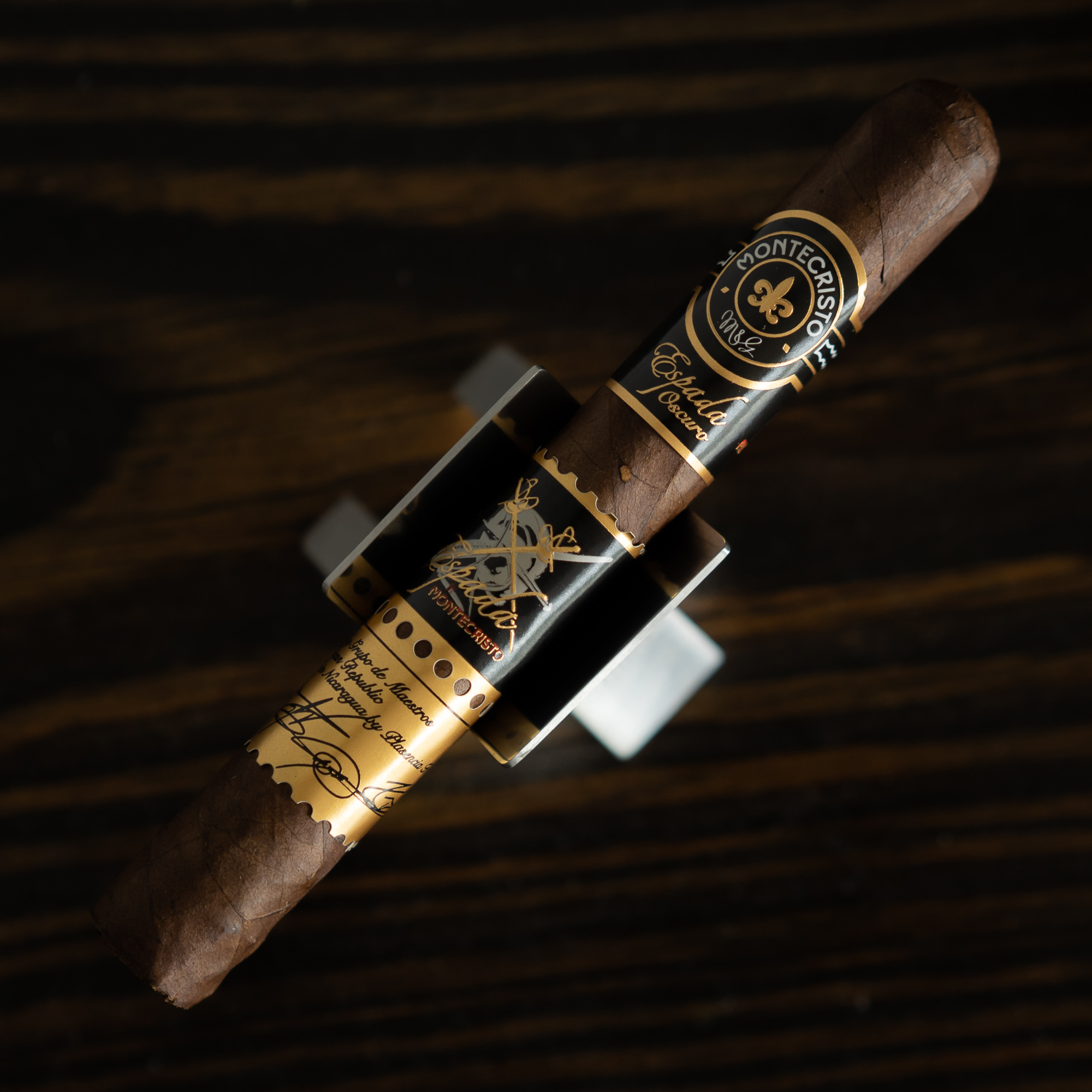 It’s an excellent start to the cigar, and it seems that was just the start because at an inch in, the strength increases even more. There’s now a significant black pepper note hitting both the palate and the retrohale quite hard (if I were honest, maybe a bit too hard to stay in balance with the other flavors). Still, I’m enjoying the power this cigar is offering and I have no doubt it’s intentional.

The ash drops after the first inch and a half and, though the burn was perfect up to this point, it does start to stray by the beginning of the second third. Around the same time, the balance of flavors shifts very nicely towards cedar, floral, and strong coffee with pepper layered beneath. The change is mirrored on the retrohale which becomes a lot more manageable and features charcoal, black coffee and toasted bread.

In the final third, the strength drops down to medium and the coffee notes condense into something more like espresso. There are also some new flavors, including a powdered sugar note that is just delicious and adds nice complexity to the smoke. This is about where I’d start to worry about the smoke heating up too much to continue, but in this case I’m happy to find that the cigar smokes cool all the way to the end.

The Montecristo Espada Oscuro is probably the most aggressive cigar from the brand that I can remember, with the possible exception of the Grupo de Maestros Private Batch III.

That said, the Espada Oscuro is an excellent cigar and I think it fills a nice niche in the Montecristo portfolio, especially when compared to other releases like the Montecristo Nicaragua and original Espada. It’s hard to say whether I like the Oscuro more than the original Espada, but it certainly comes close. The only critique I’d offer for the Espada Oscuro is that at times the spice and pepper notes dominate the other notes which are great and deserve more of the spotlight.

In either case, it is absolutely a cigar to pursue for any fans of Montecristo or Plasencia tobacco.

Brand evangelist, digital marketer, cigar and spirits expert specializing in consumer tasting and educational events. Matthias made the long trek from his hometown of Portland, Oregon to New York City in 2007, and in nine years has hosted more than 120 events and helped promote and launch dozens of cigar and whiskey brands in the U.S. In 2016, he joined the Cigar Journal Tasting Panel, blind-reviewing pre and new release cigars.
« Plasencia Alma del Fuego Panatela Review» AVO Unexpected Tradition Review