Up for review today is the latest from Quesada: the 1974 in the robusto size. Quesada is a company that I’ve grown to love over the years, thanks largely to the amazing work that Michael Herklots has done with the family on many excellent Nat Sherman blends. I’ve also met the family a number of times and they are probably the most gracious and hospitable event hosts I’ve ever met. Quesada also won our 2018 Cigar of the Year designation with the Quesada Vega Magna, a cigar which scored a 94 rating for its amazing complexity, flavor and overall storytelling.

The Quesada 1974 was released just a few months ago after previously being released in the European market via Spain. The cigar celebrates 45 years of business for the Quesada family, so I’m expecting something special, or at least different. 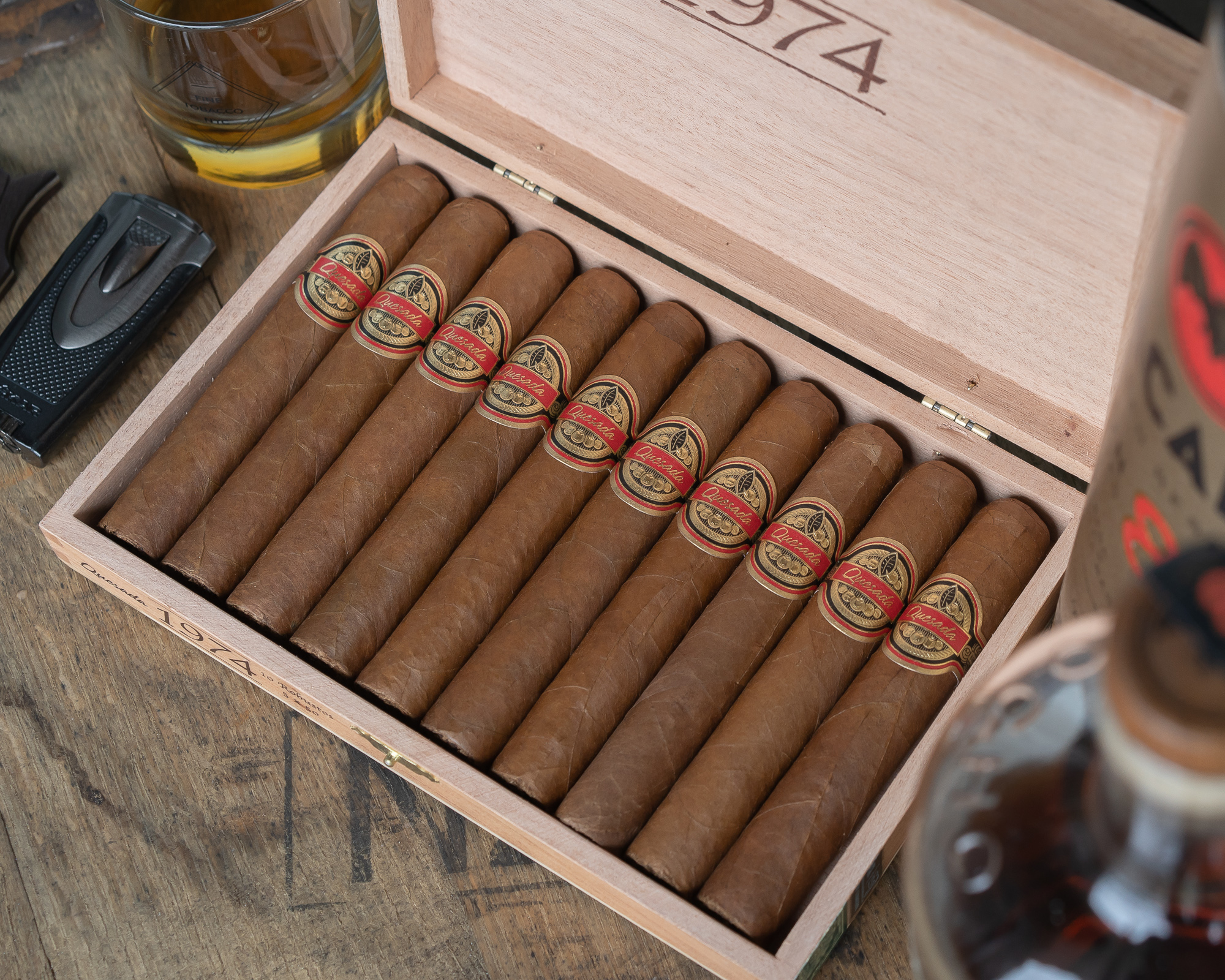 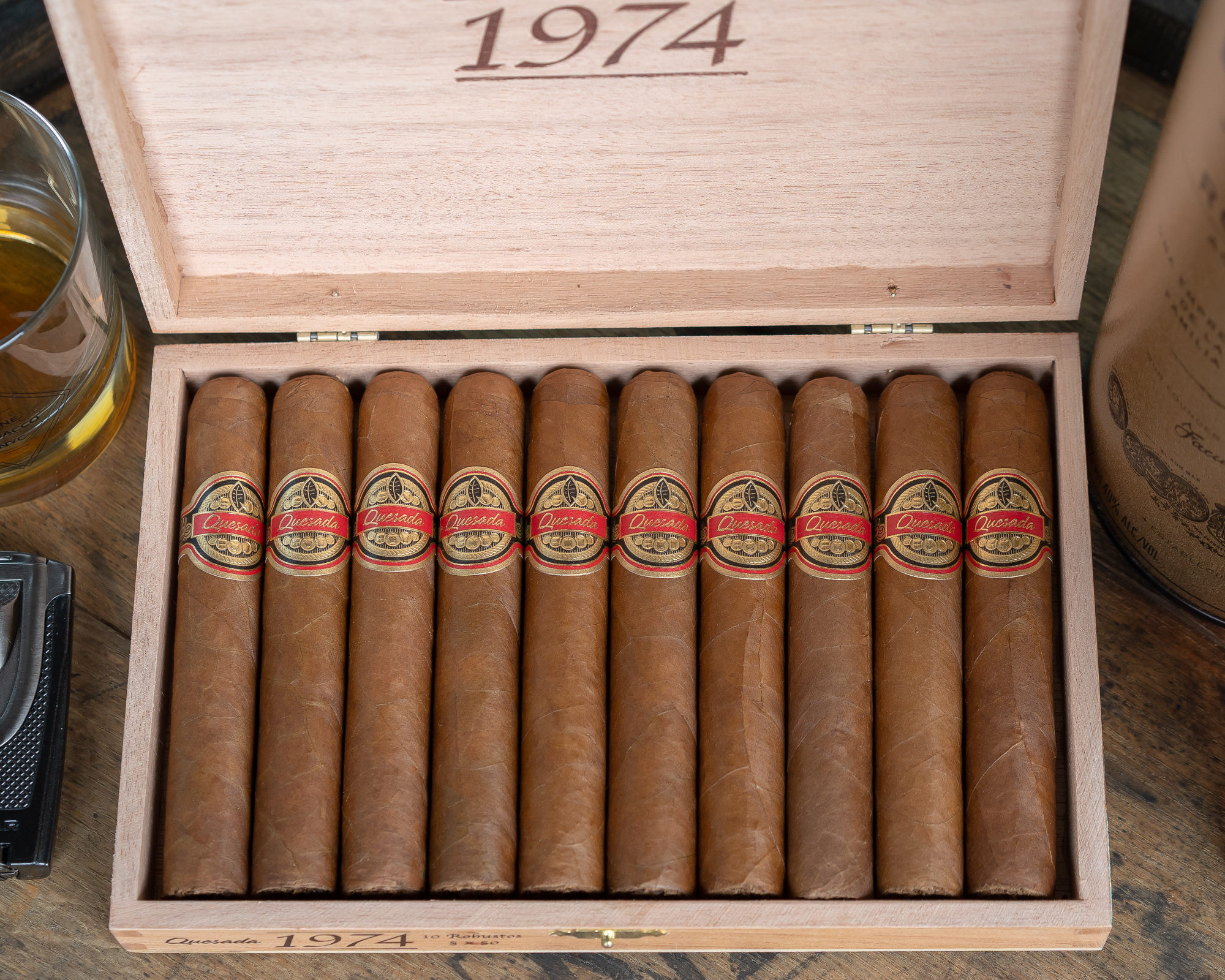 The Quesada 1974 certainly looks celebratory owing to its copious use of gold amidst the red and black accents. The outer Ecuadorian wrapper is also attractive, though it has its share of visible veins, some running nearly the length of the cigar.

Off of the foot I find aromas of both sweet and savory spices, charred meat, honey and earth. The cold draw has a good deal of earthiness as well, along with some granola. The draw is fairly non-restrictive, probably about a 6/10 in terms of amount of restrictiveness, so I’ll be curious to see how it affects the overall experience.

The Quesada 1974 robusto kicks off with an immense amount of aromatic, flavorful smoke. The texture and body is light and elegant, but surprisingly strong (mild to medium body, medium plus on strength). Some hot spiciness hits the tip of the tongue first, followed by toasted bread, malted barley, creamy nuts, and black pepper on the retrohale. It’s very much a Quesada flavor profile, though the strength of the black pepper on the retrohale is surprising. The word that’s coming to mind is “spice sandwich”—it’s the first thing that hits your tongue on the draw, and the last thing you sense on the retrohale, with all of the other flavors in between. It’s certainly an interesting flavor profile, though I do find the cigar difficult to categorize.

As the smoke continues, the Quesada 1974 develops a solid white ash that is mostly straight. By the time it reaches about an inch and a half, the spice on the retrohale makes way to showcase a core of salty cedar, hot spices, and a vanilla note that shows up in the aroma and adds nice complexity. The strong spice and black pepper on the retrohale remains.

The second third is a whole different story. The aggressiveness and spice that characterized the first third of the 1974 draws way back, replaced by a lighter notes of charred wood, tempered black pepper, vegetal notes, and vanilla. The retrohale also shifts, replacing strong spice with toasted bread and cinnamon. Overall, much more balance in the smoke and ultimately more enjoyable than the first third which seemed to have a difficult time settling on any combination of flavors.

In the final third, the Quesada 1974 picks up a bit more strength and lands right at medium in both body and strength. The flavors are a diverse mix of savory, salty, spicy, and sweet, with hot spices again at the fore followed by dry cedar, salt, and savory meats. The cream which was so evident in the first half of the cigar is mostly nowhere to be found, which is a bit of a bummer because I think it counterbalanced the pepper nicely. Otherwise, construction remains just about perfect, with only a slight waviness to the burn. The only construction issue that does arise is a bit of additional heat to the smoke likely as a result of the unrestrictive draw.

Having smoked the Quesada 1974, the fact that they first released the cigar in Spain makes perfect sense given the differences in preferences between Europe and the US. The American market in cigars is—like in wine or whiskey—more drawn to flavors that are more straightforwardly strong and sweet/spicy. The European market on the other hand typically focuses a bit more on flavors that don’t scream “sweet” or “spicy” quite as loudly. So the launch in Spain makes sense given the subtler, more neutral flavors that are offered up in the 1974.

All that said, I enjoyed the Quesada 1974, especially the interaction between spice, pepper, malty notes, and cream. I also give Quesada credit for creating what I think is a singularly unique blend—I haven’t smoked anything like it before. The only downside is that the cigar was out of balance at times, most notably in the first third where I think the spiciness took up a bit too much of the spotlight.

Brand evangelist, digital marketer, cigar and spirits expert specializing in consumer tasting and educational events. Matthias made the long trek from his hometown of Portland, Oregon to New York City in 2007, and in nine years has hosted more than 120 events and helped promote and launch dozens of cigar and whiskey brands in the U.S. In 2016, he joined the Cigar Journal Tasting Panel, blind-reviewing pre and new release cigars.
« Gran Habano Persian King Maduro Review» AVO Unexpected Passion Review