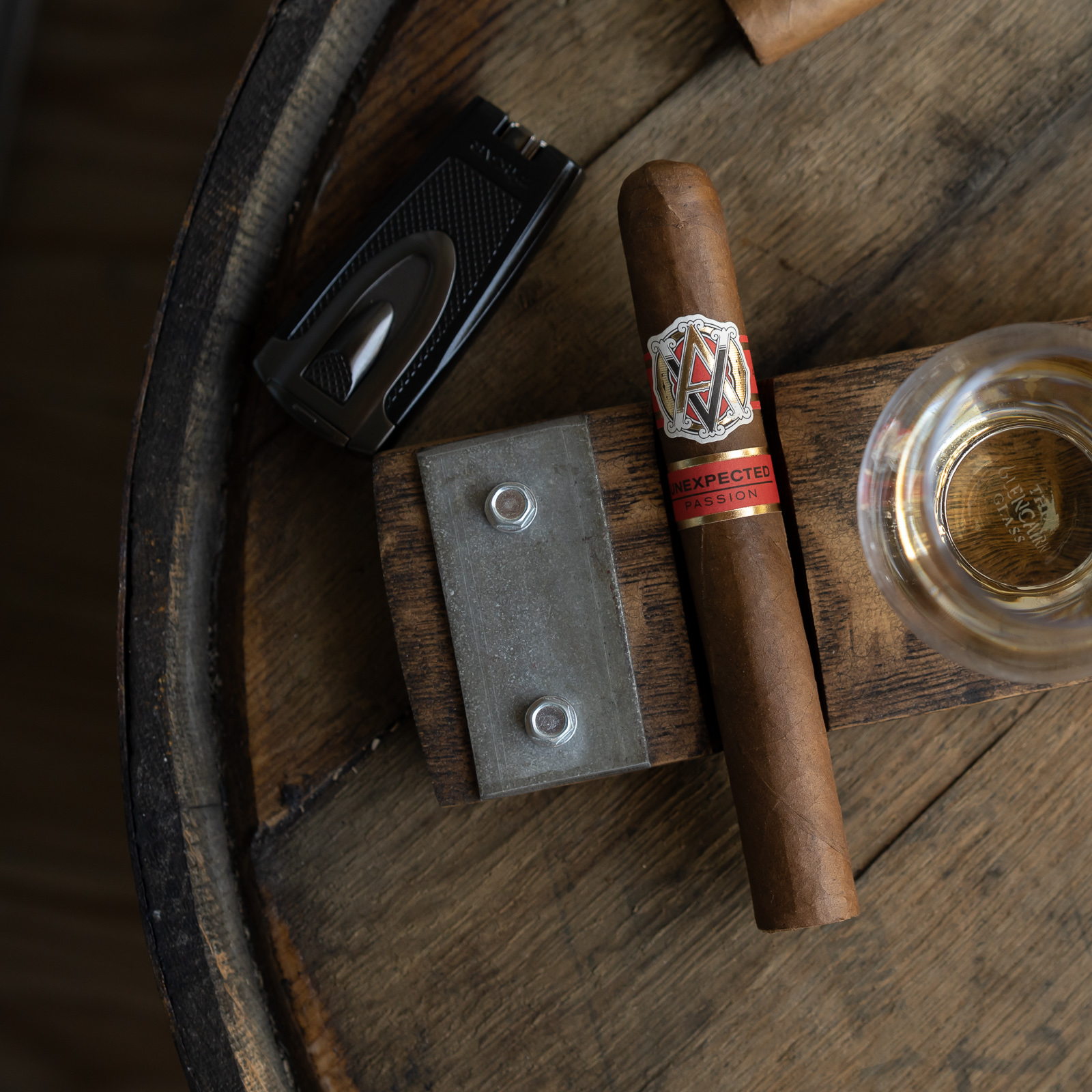 The AVO Unexpected Passion is a beautiful cigar, primarily because of the gorgeous, extremely oily Ecuadorian wrapper leaf. It’s also expertly constructed, with slight springiness that is consistent the entire length of the cigar.

Taking a whiff off the foot of the cigar, I’m greeted by bright aromas of cedar strips, black pepper, and grilling spices. The pre light draw produces warm notes of bread, light spices, and white pepper that sizzles on my lips.

It’s a big, delicious opening from the AVO Unexpected Passion. The cigar has a very well rounded texture, and produces the perfect amount of smoke with each puff. The flavors are complimentary, with sweet baking spices, cream and oak on one side and semi sweet chocolate and a dash of pepper on the other. Body and strength off of the bat both sit just under medium. A good start. 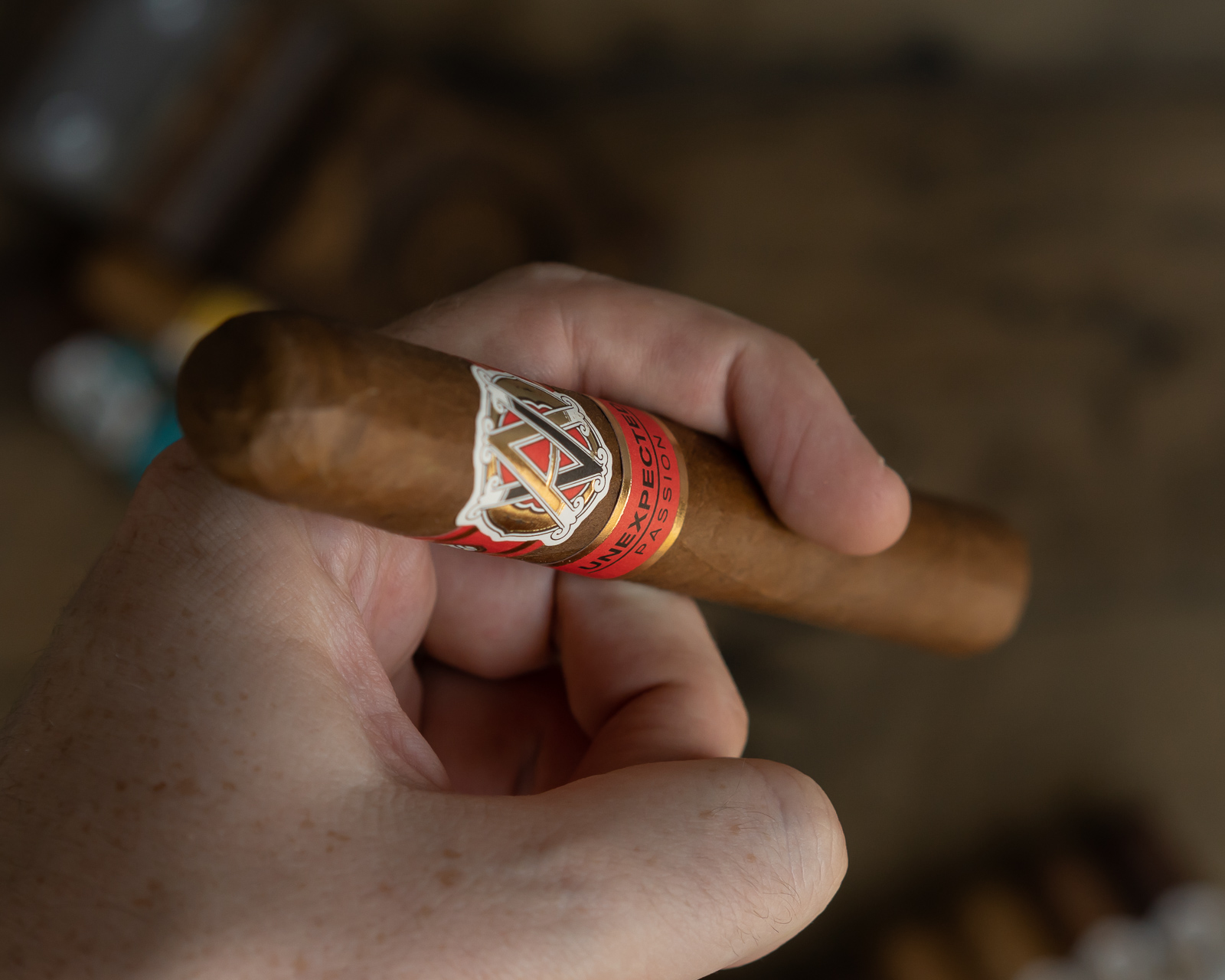 It isn’t long before the smoke starts to morph. A tangy, spicy mustard note (that I’m not quite sure about) makes a big entrance. The retrohale gets a dose as well, though the pepper is more evident there.

By an inch and a half in, the AVO Unexpected Passion is an altogether different cigar. Strength and body both climb past medium. The balance of flavors is totally different as well, with black pepper, tangy mustard, toasted bread and liquorice all coming together to make a profiles that’s strange but enjoyable.

As the AVO Unexpected Passion burns past the halfway mark, it’s still not done changing.  The tangy mustard finally decides it’s time to take a break and moves to the back seat. In its place are sweeter notes of cream and cinnamon. Black pepper and charred oak play in the background and on the retrohale. Construction is flawless, with no retouches and a great burn line.

The final third smokes mostly the same, though the strength of the smoke rises and falls at seemingly random intervals. As the cigar burns toward the end, the smoke is characterized by hot spices, mustard, charred oak, and some faint cream. Certainly not a perfect ending, but still very good.

The Unexpected Passion is another big win from AVO Cigars. The smoke is extremely flavorful, complex, and there’s hardly a moment where the cigar isn’t changing and offering even more.

Predominant flavors include sweet cream, oak, tangy mustard, and all kinds of sweet and savory spices. The only other thing I’d mention is that because of the dominant mustard note, the Unexpected Passion may be a cigar more suited for veterans and enthusiasts than for beginners.

Brand evangelist, digital marketer, cigar and spirits expert specializing in consumer tasting and educational events. Matthias made the long trek from his hometown of Portland, Oregon to New York City in 2007, and in nine years has hosted more than 120 events and helped promote and launch dozens of cigar and whiskey brands in the U.S. In 2016, he joined the Cigar Journal Tasting Panel, blind-reviewing pre and new release cigars.
« Quesada 1974 Review» Micallef Migdalia Corona Extra Review