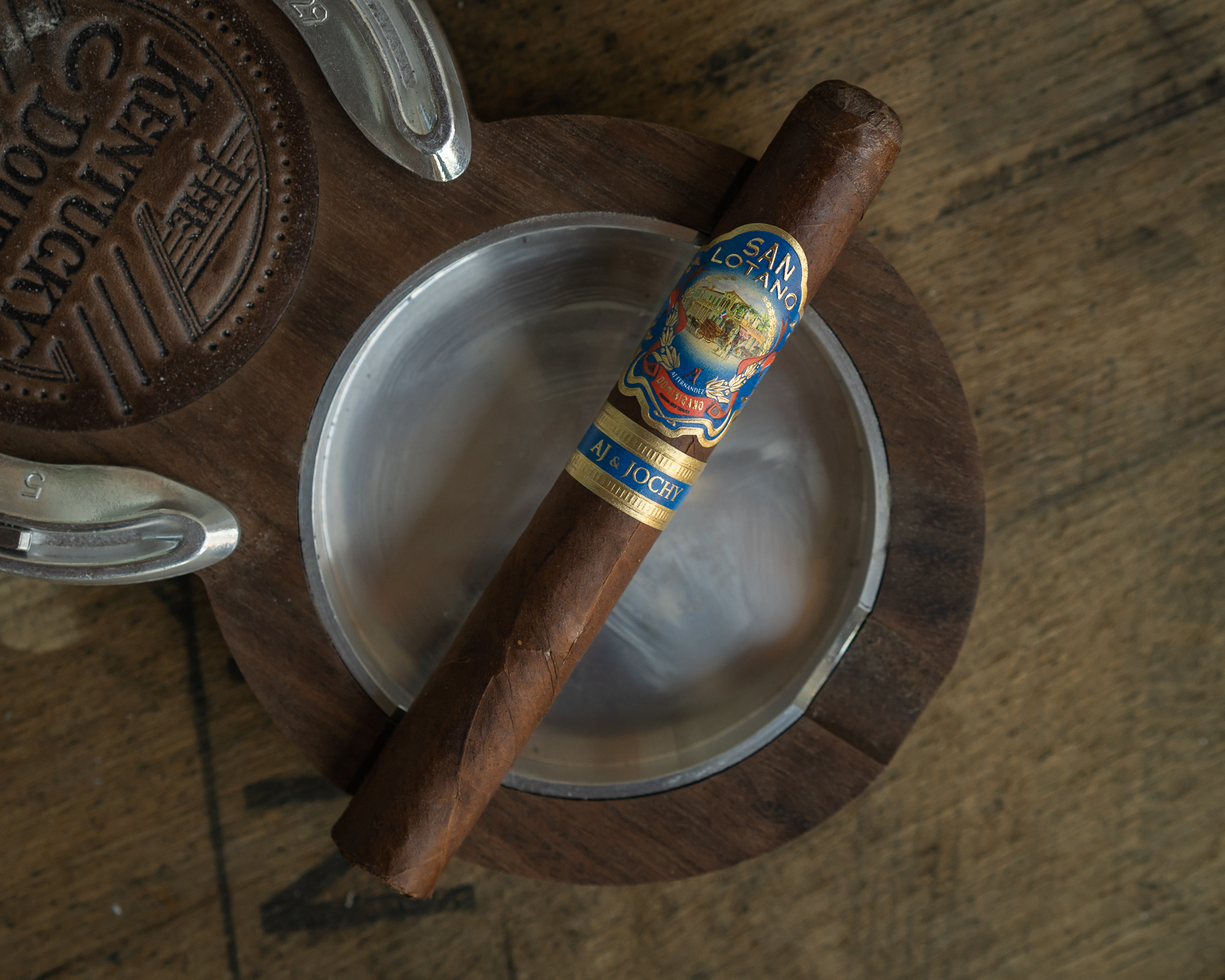 Sometimes it seems like 80% of the cigars I review on any given month just happen to be in some way connected to AJ Fernadnez, one of the most popular (and increasingly famous) blenders on the market. From ultra boutique brands like Viva La Vida to giant tobacco companies like Altadis, Fernandez is simply everywhere. And with the quality of smokes he puts out, his products basically demand to be reviewed. Such is the case with the San Lotano Dominicano, which is a collaboration project between Fernandez and Jose “Jochy” Blanco.

The San Lotano Dominicano is easily one of the most visually striking blends to hit the market in 2019. The dominant blue of the main band plays perfectly next to the gold and red accents, and complements the rich outer Brazilian wrapper. The outer leaf has a sandy texture and some major knotted veins located mainly near the head of the cigar.

Taking a whiff off of the foot of the cigar, I pick up aromas of barnyard, wood planks and light cocoa notes. Taking a cold draw reveals a slightly restrictive draw (about an 8/10 in terms of amount of restrictiveness), and notes of earth, granola, and light spices.

Once lit, the San Lotano Dominicano opens up with assertive flavors that are spicy, sweet, and slightly bitter. It’s strong (medium +) but definitely in a way more characteristic of Dominican tobacco than Nicaraguan. In order of prominence are notes of toasted nuts, sweet floral, cocoa, big white pepper, and cream on the finish. The retrohale is just as enjoyable, with heavy toasted bread, vegetal notes and white pepper. The cigar produces excellent amounts of rich smoke, and though there is some initial waviness to the burn, that corrects itself in about half an inch. What I’m loving most at this point in the smoke is the texture. It does a great job threading the needle between smoothness and assertiveness.

As the cigar burns past the first inch and a half, the balance of flavors ebbs and flows, sometimes emphasizing creamy cocoa, other times focusing more on a spiciness that borders on jalapeño. Beneath these notes are oak, Fuente-esque vegetal flavors, and bitter espresso. All of this helps the cigar deliver balanced complexity that makes for a captivating experience.

Into the second third, the San Lotano Dominicano loses a touch of its strength, and some of the spiciness present up till now burns off with it. The balance of flavors shifts definitively to sweet, and the smoke takes on a chocolaty flavor that’s nicely augmented by bitter espresso. Still very enjoyable but not quite as complex as the first third. Construction is perfect, with a razor sharp burn and excellent smoke production.

The final third of the Dominicano sees the profile shift once again, this time toward savory vegetal notes, white pepper, and traces of cinnamon, cocoa and cream. Construction never falters, and though the smoke does start to pick up some heat, it’s manageable and I smoke the cigar down to the nub.

The San Lotano Dominicano is one of the more enjoyable 2019 releases that I’ve smoked lately. It has a balanced and harmonious flavor profile, with notes of toasted nuts, floral, cocoa, pepper, and a nice cream. Construction is essentially perfect throughout the course of the smoke, which is no surprise given the characters involved in producing the cigar.

Brand evangelist, digital marketer, cigar and spirits expert specializing in consumer tasting and educational events. Matthias made the long trek from his hometown of Portland, Oregon to New York City in 2007, and in nine years has hosted more than 120 events and helped promote and launch dozens of cigar and whiskey brands in the U.S. In 2016, he joined the Cigar Journal Tasting Panel, blind-reviewing pre and new release cigars.
« Trinidad Vigía Review» Tatuaje Monster Series 2019 “The Chuck” Review