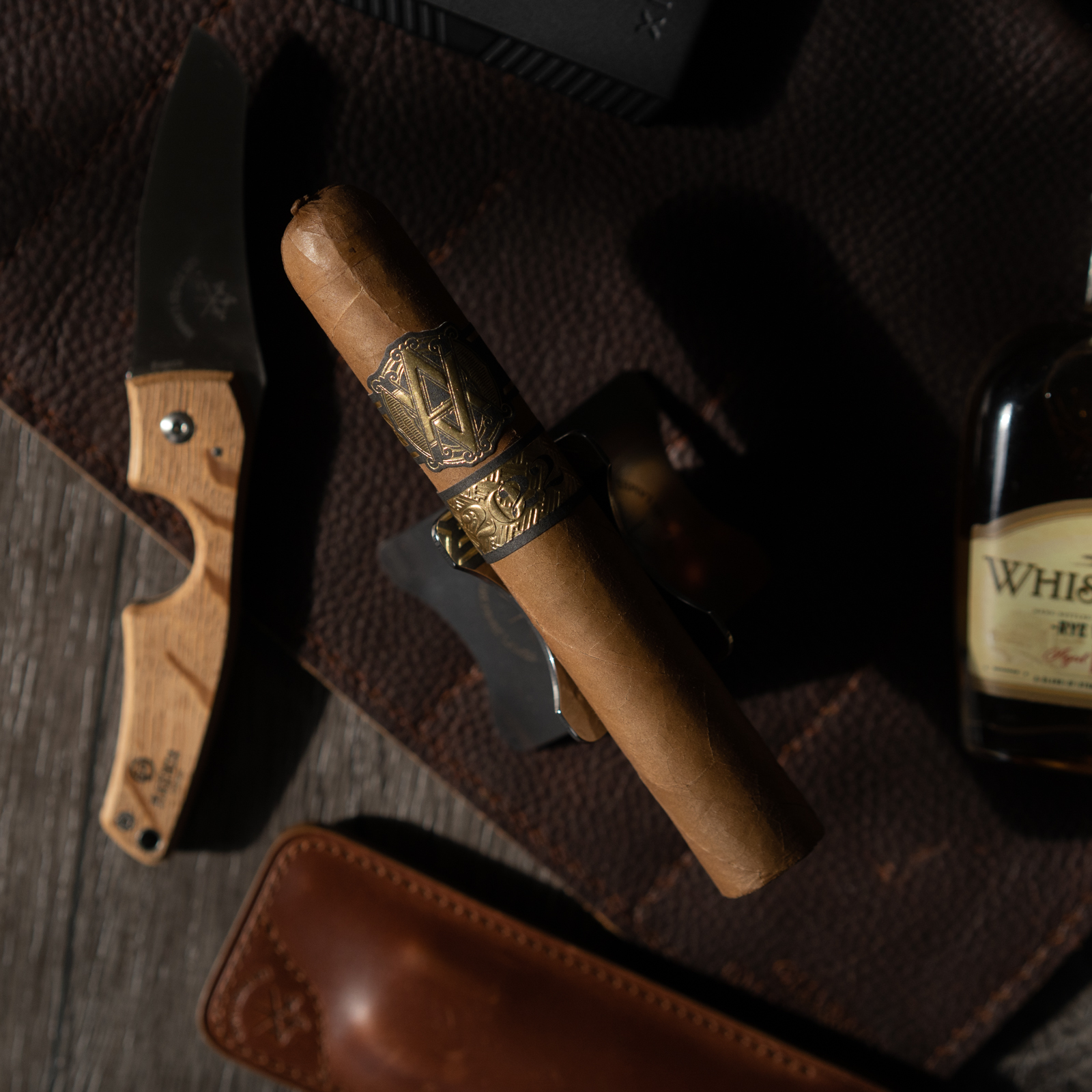 Since 2001, Avo has been known for its yearly Limited Edition releases celebrating Avo Uvezian’s birthday. In 2015, that tradition was replaced with another, debuting the Avo Improvisation series. The name pays tribute to Avo’s love for music and the impromptu nature of jazz.

Sadly, the Avo Improvisation 2022 will be the last release under this series. However, the Improvisation series went out with a bang featuring a double encore of two blends, a white, and a black. The box of cigars contains both, with 22 cigars in total, 11 per label. The cigars have been arranged in a pattern alternating between the light and dark wrapper, mimicking the instrument that was once loved by the late founder. 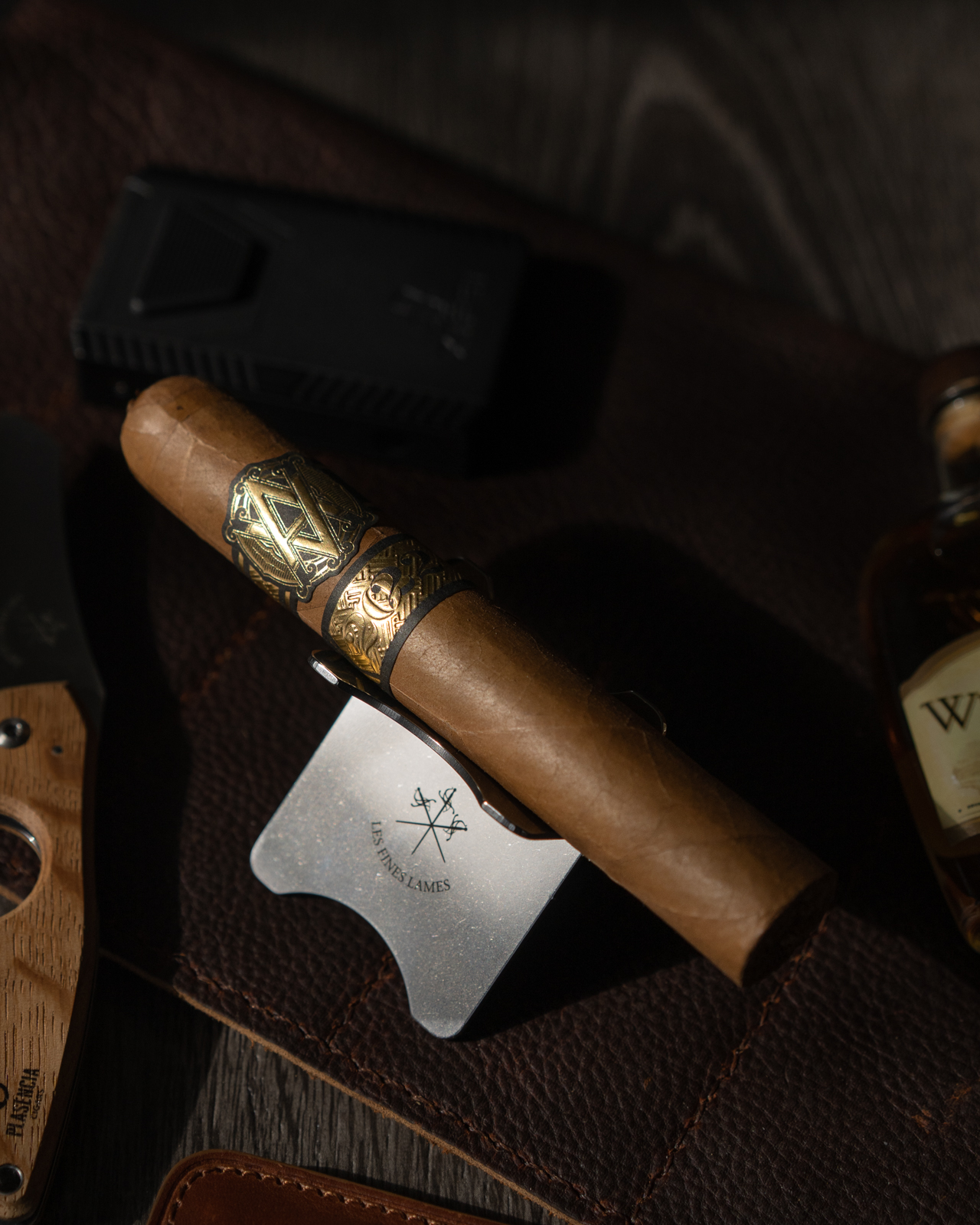 The cigar is masterfully wrapped in a thin Connecticut leaf while wearing a swirly pigtail as a crown. There are no veins visible on the surface, but the pristine wrapper is disturbed by small cracks and tears in various locations due to the thinness of the leaf. The cigar is well packed, except for a small dimple by the beginning of the final third.

I could not pick up any scent off the wrapper until I reached the foot of the cigar and got sweet honey. I sliced off the cap using my Xikar XO cutter and took a cold draw. On the draw, I taste stone fruits and a hint of red pepper spice at the back of my throat.

I decided to use matches to light this cigar, not wanting to singe the thin wrapper. I take my first puff and immediately get bitterness followed by toasted peanuts, dry hay, and a hint of pepper spice. The smoke itself is very buttery and creamy. After a few puffs, the initial bitterness got replaced with fruity sweetness in both the draw and the finish. The taste on my palate was so delicious that I almost forgot to retrohale. I was halfway through the first third before I realized I still had not checked off that box yet. I rued my decision when I decided to retrohale. As if lava was coursing through my nasal passage, my olfactory senses became overwhelmed by pepper spice, and it lingered a while before I can smell again. I made several attempts to retrohale this cigar afterward, but ultimately, I could not get past the pepper spice. On the brighter side, the construction of this cigar has been impeccable. The wear and tears were not a concern as the cigar burns evenly, and the ash held as if it was reinforced with cement.

Halfway through the cigar, the smoke is still sweet and creamy. The flavor profiles evolved to fresh almonds, dry hay, leather, and a hint of spice. And after mentally preparing myself, I went in for another retrohale. To my surprise, the pepper spice subsided enough for me to enjoy it, and I’m getting sweet vanilla hay out of it.

In the final third, I start to enjoy this cigar. I got roasted peanuts, cedar wood, vanilla, hay, and pepper spice; all wrapped in a sweet and silky smoke. The spice was reduced to a minimum on the retrohale, and I was able to experience almonds, vanilla, maple syrup, and cedar wood. While approaching the last few puffs, I managed to slow down and extend on each draw. This highlights the silky character of the smoke even more. As a result, the rush of flavors is even more pronounced and made the finish last longer after my final puff.

This cigar went from “not your grandfather’s Connecticut” to an ideal morning smoke. The overwhelming spice on the retrohale woke up every receptor in my olfactory system. After getting past the very beginning of this cigar, the Avo 2022 White becomes very enjoyable with its sweet and creamy smoke. These characteristics meld very well with the roasted peanuts, cedar wood, and hints of pepper spice throughout the experience. And to top it all off, the construction was perfect, making this cigar smoke effortlessly.