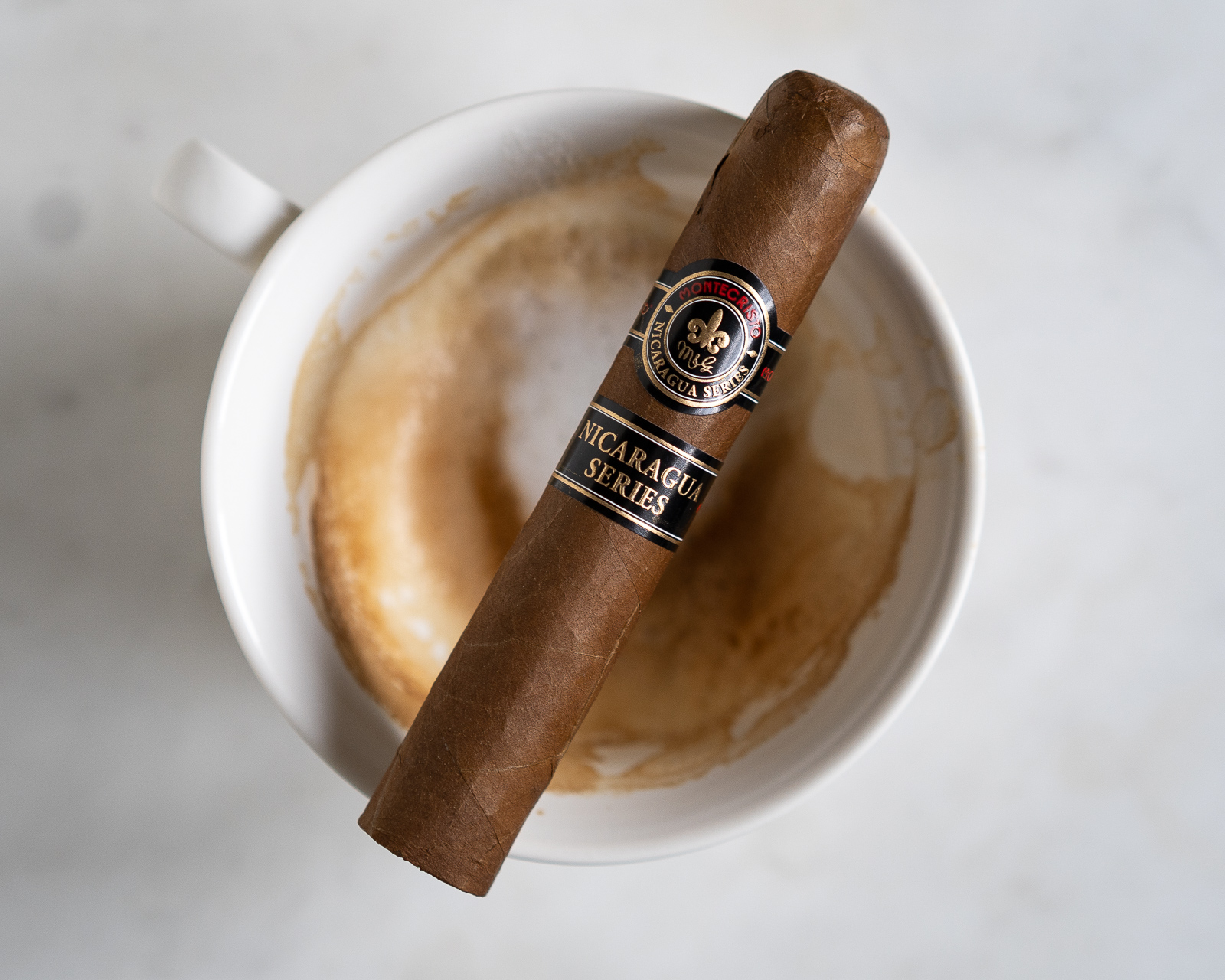 Up for review today is the newest from Montecristo (Altadis)—the Montecristo Nicaragua Series. The cigar was originally released in 2018, and we had the luck of hosting the New York launch of that event at The Carnegie Club (more about that event here).

If “Nicaragua Series” sounds familiar, there’s a reason for it. Many traditionally DR-focused brands have released “Nicaragua” blends in the last couple of years, including Davidoff, Aging Room, Romeo y Julieta, H. Upmann, and a slew of others. It’s a transparent attempt to capitalize on Nicaragua’s growing reputation as the new epicenter of flavor and quality in the cigar world. Not all attempts have been successful (I don’t care for the Davidoff Nicaragua, for example), but I appreciate all of the attempts. Mainly because I love Nicaraguan tobacco.

In any case, the Montecristo Nicaragua Series is offered in four sizes, including:

Let’s see how this cigar smokes. 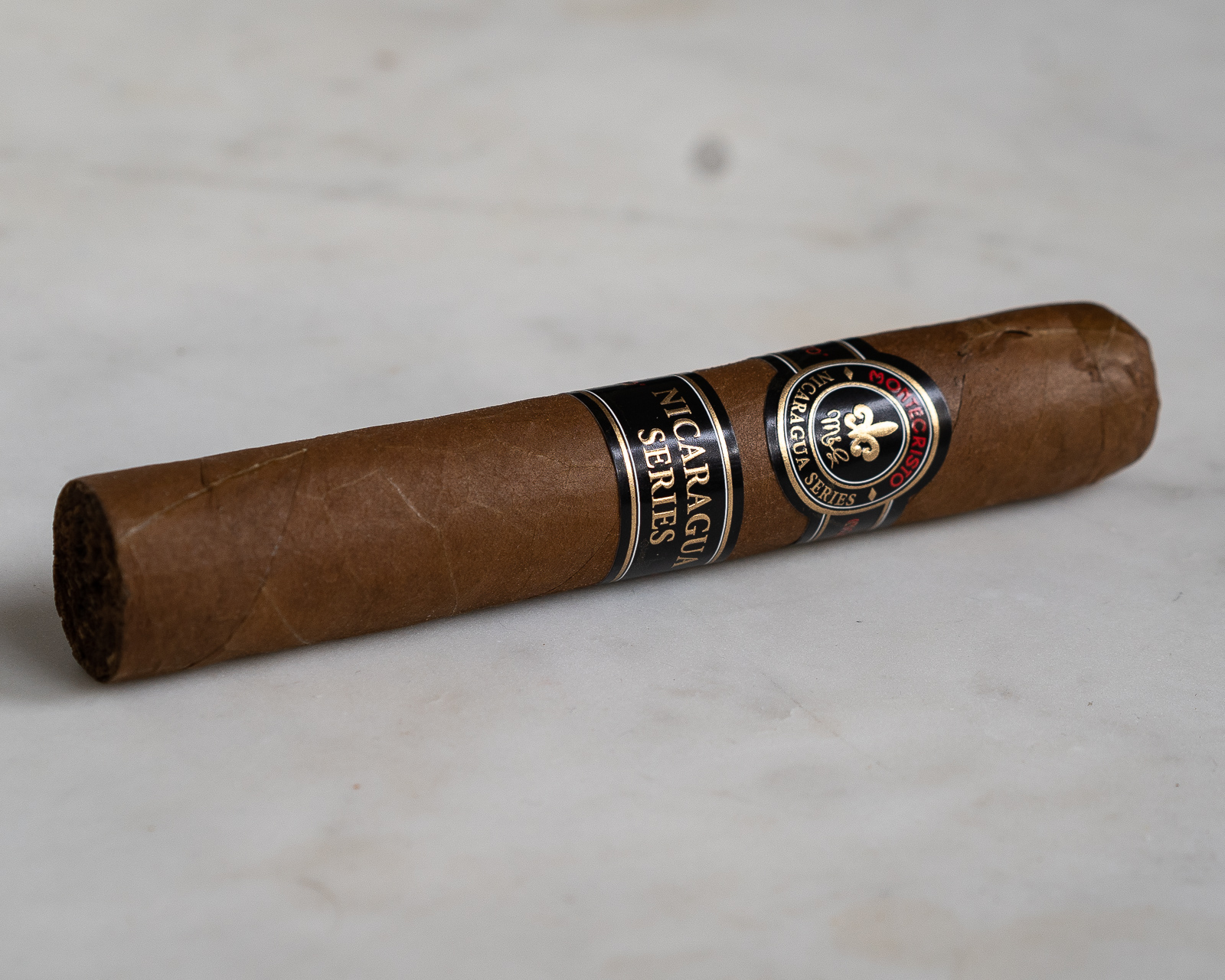 I’ve got to say, looking at the Montecristo Nicaragua Series, it’s definitely a step above many of the previous Montecristo USA blends in terms of how it’s branded. Instead of being a bit gaudy as other blends like the Espada Guard or the Pilotico which has a massive mid-cigar band, it’s got striking but conservative black, gold and red branding. It gives the cigar a sturdy look, makes it stand out, all without calling to much attention to itself. So props to the Montecristo branding team on this one.

The outer Eucadorian Habano wrapper is nearly seamless, with just a few small veins and an otherwise flawless appearance. When squeezed, the cigar has a fair amount of give and seems to be packed consistently the length of the cigar. Off of the foot is a nice array of aromas: where spice is the first aroma to meet the nose, it is followed by sweet cedar, hay, and salt and pepper and coffee. Nothing remarkable, but well balanced. The cold draw is a bit less expressive, but generally mirrors the aromas off of the foot.

The Montecristo Nicaragua Series opens with medium-plus bodied smoke. It’s got a lot of what I expect from Montecristo: earth, almonds, and cedar balanced by some creaminess. There’s also a bit of chocolate which edges in on the nose. Smoke production is a touch above average, meaning I’m not having to work too hard to product smoke and I’m getting the flavors as intended. The retrohale is a bit unwieldy, with a bit too much earth which compromises the smoothness of the smoke.

First impression: this is similar to Montecristo’s other core products, but with additional heft from the Nicaraguan tobaccos. It’s actually quite complex, with the earth being the only note that sometimes dominates too much.

At an inch in, the Montecristo Nicaragua Series has a razor sharp burn that’s still holding strong. I’m finding at this point that my favorite part of this smoke is actually the aroma. The scents are sweet but complex, with notes of almonds, floral and light milk chocolate. The almond note on the palate is fully in charge, though a rough textured earth elbows out many of the more subtle notes (cocoa, cedar, and baking spices). Translation: good complexity, but could use a bit more balance.

This continues up until a few puffs into the second third, where the Montecristo Nicaragua Series Robusto begins to come more into focus and more into balance. The heavy earth and spice on the retrohale mellows a bit, and the impressions on the palate are balanced between bitter, sweet, and spicy. The flavors themselves haven’t moved much, but the increased balance amplifies the enjoyment of the smoke.

In the final third, the Montecristo Nicaragua Series edges above medium in terms of body and strength. Sweetened almonds, cedar and burnt espresso are center stage, with baking spices and salt on the tip of tongue. It’s a pleasant enough profile, but it’s clear at this point that the cigar could benefit from more movements in flavor. Thankfully, the cigar manages to avoid the burst of harshness at the end that many fall prey to, providing for a nice close to the experience.

While the Montecristo Nicaragua Series doesn’t fly high in terms of balance, it does offer a nice take on the more traditional profiles of Dominican Montecristo cigars. It’s also a lot more elegant of a cigar than many other Nicaraguan blends that focus exclusively on producing high powered smokes. That being said, I’m still very particular to other Montecristo blends like the Espada, New York Series, and others. 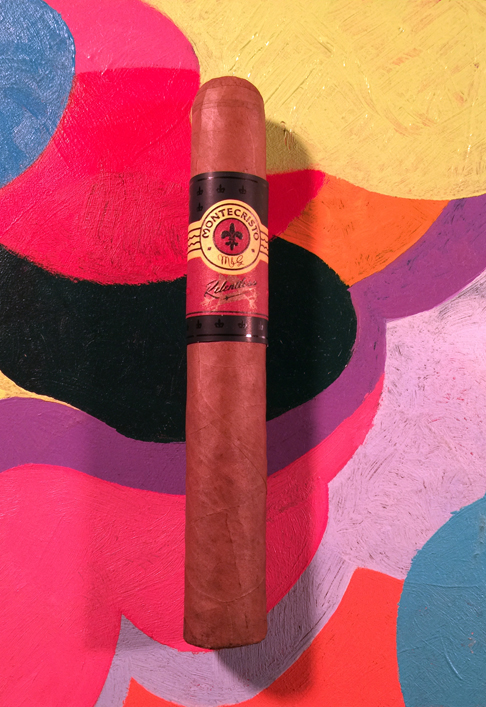 The Montecristo Relentless, joining a long line of Montecristo brand extensions, is manufactured at the Tabacalera de Garcia in La Romana, Dominican Republic by Altadis S.A., a subsidiary of Imperial Tobacco Group. The Relentless is specially made for Famous Smoke in Pennsylvania. The cigar for this review came from Famous Smoke. 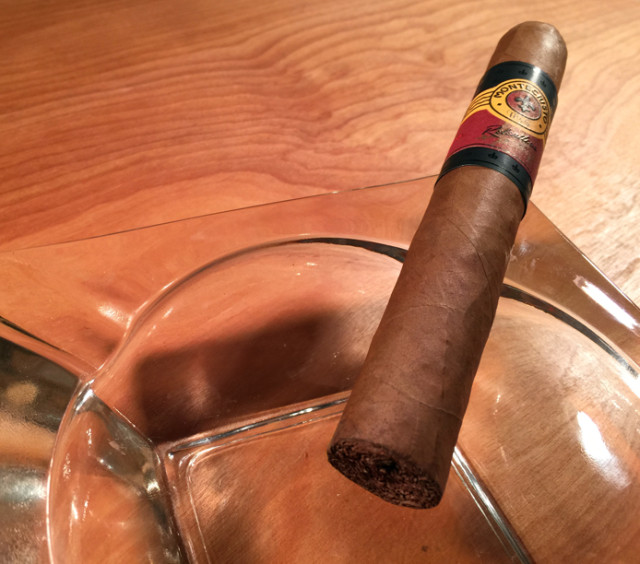 Cold Aromas: Off the wrapper is a hefty cedar and dry wood. The foot shows cedar, caramel and hay, with a hint of hazelnut to cashew note. Dry yet, sweet. The cold draw presents hay, a slight buttery nuttiness, cedar, and a salty taste left behind on the lips. The draw is very open and airy with just a touch of tension. 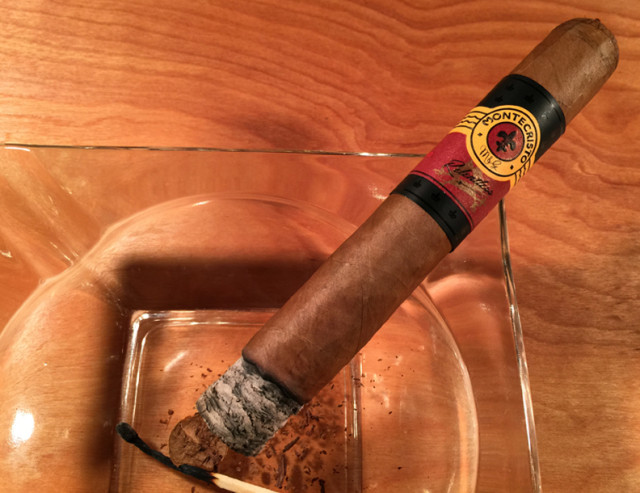 First Third: The first notes are dry and bitter hay with a touch of bitter coffee bean, with a transition into cedar and a dry woody finish. The draw is very open and airy, providing plumes of creamy smoke right off the bat, though the smoke has a bit of grit to it. Burn line looks phenomenal from the start, and the aroma is a salt and cedar mix. Ash is a salt and pepper grey and has a nice formation. There’s also a slight touch of cinnamon on the draw but doesn’t last long at all. Settling in, the smoke does start to develop a creamy buttery feel and that feeling also last through on the tongue and in the nose until the next draw, which starts to develop a cashew and almond note. From the looks, this may be a fast burner, but we’ll see how things progress. The butter and hay hold the main stage while the cedar has dropped a bit. 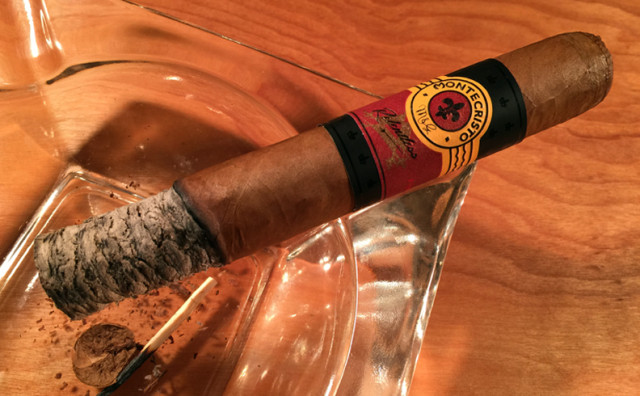 The profile is medium in body, medium in flavor, and medium in strength. While the flavor is weighed at medium, I find this cigar to be quite flavorful and semi-complex. There is also a slight grass and vegetable note that lingers for a bit but doesn’t come that far into the fold. The ash holds very nicely, and pretty well, even at 1.5 inches. Starting the transition from the first third to the second, the caramel that was found on the foot is starting to become more present in the smoke. It is not heavy but noticeable, and provides a nice smooth creamy texture, slightly syrupy, to the already smooth and creamy smoke. There is also a touch of white pepper that also comes up on the finish, and leaves a little tingle on the tongue. The finish is clean but not short-lived. 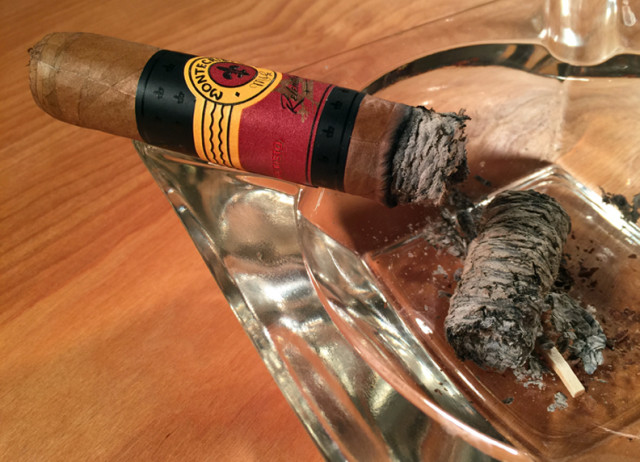 Second Third: The ash is still holding strong, and usually I would have tapped it off by this point but I’ll do the cigar justice let it see how far it wants to go before falling off on its own. Flavors are holding steady with the hay, caramel, butter, cedar, and touch of white pepper mix. Aroma is hay, cedar, and a touch of saltiness; that saltiness can also be found in a minimal amount on the finish in the nose as well. Burn line still looks really good and performance is phenomenal. Smoke production is still airy, clean, thick and plumy. The ash fell off on its own at 2 inches as one solid chunk. The smoke is extremely cool. The profile is still holding at medium in body, medium in flavor, and medium in strength. Removing the bands is fairly ok, the smaller top band comes off easily and the larger black band comes off fairly easy as well, but it did pull a little bit of the wrapper. Though, this was minor and shouldn’t affect the performance. The caramel has dropped a bit, leaving more of a dry hay and slight cedar profile. The white pepper has also been completely dropped.

Final Third: The butter is transitioning into a fuller nuttiness and taking on the characteristics of almond. The hay is still the main note but dropping a bit as the almond becomes a greater competing factor. The cedar is still sticking around as well. The smoke is still creamy, thick and plumy. The aroma is still wonderfully cedar and salt. This cigar ends at medium in body, medium in flavor, and medium in strength for a very consistent smoke.

While not a very complex or heavy cigar, there’s a decent amount of flavor and roundedness to be found in the Montecristo Relentless. The profile stays consistent throughout the session as a medium, through and through. This cigar is filled with great billows of smoke, aided with its open and loose draw with just the right amount of tension, providing greater control to the smoker. As stated earlier, this cigar is surprisingly flavorful and something I’ve always enjoyed about cigars that utilize an Ecuadorian Connecticut wrapper. They tend to provide much more flavor and durability than U.S. Connecticut Shade wrappers. The blend here delivers a concoction of hay, caramel, cedar, touches of grass, salt and white pepper notes and a roundedness of buttery almond. An enjoyable any time of day smoke, though preferable for the morning and early afternoon before breakfast or brunch.

The burn stays consistent and doesn’t stray at any point, and can also be put down for a minute or so without fear of going out. While it does come off as a fast burner, this is mostly an illusion as the cigar definitely last a good smoking time, which satisfies the appetite but also doesn’t last too long.

Smoking time was 1 hour and 50 minutes.

Update: you can read a list of our top three favorite cigars from Montecristo cigars here.