Archetype by Ventura Cigar Co. is not a brand I cross paths with regularly. However, as a fantasy enthusiast, you can imagine my interest after learning about the cigar once the big reveal from my blind review. Archetype originates from the works of psychologist Dr. Carl Jung and mythographer Joseph Campbell. Throughout much of Campbell’s research, he has discovered that in the world myths, ‘Hero’s Journey’ is a common theme used to tell and retell stories in their infinite variations since the beginning of time.

Using the ‘Hero’s Journey’ as a guideline, Archetype came out with their tale under their Fantasy Miniseries; Cloaks, Crystals, and Curses. Today I will be doing a blind review on Curses. As described on their website, “Curses represent the evil forces our hero is pitted against…”. Let’s see what kind of endeavor we would face smoking Curses.

Just like the name and the description suggested, Curses is true to its nature when it comes to its construction: A dry, toothy, Maduro wrapper a little bit on the rough side. The edge of the wrapper is visible; you can feel the separation, but it still gives off a sturdiness as a whole.

The cigar is pack proportionally, and it is springy as I squeeze it between my fingers.  The wrapper gives off a strong smell of sweet and tart raisin, followed by light leather and espresso beans. Off the foot, I get apricot and dry hay. After shaving off the cap, and taking several puffs, I taste leather, sweet stone fruits, and bitter coffee.

I take my first puff of the cigar after lighting and the foot shines like a miniature sun. Immediately, it feel like I get splashed in the face with a cup of dark roast coffee. As the initial flavor disburses, I taste oak, leather, earthy mineral with a hint of bitterness in the smoke, all while an undertone of pepper grows towards the back of my tongue. As I retrohale the next few puffs, the smoke comes through my nostrils with white pepper spice, roasted coffee beans, and almonds. As the first third comes to an end, the ash is still holding on and the burn line is even. The only complaint I have so far is the missing component—creaminess—which I believe would elevate the smoking experience and round up some of the roughness for this cigar.

The second third doesn’t change much, at least not until the halfway mark. Now I’m tasting medium roasted coffee, wheat, almond, and an earthy taste that reminds me of a wet log. On the retrohale, I get sweet black coffee, tree bark, and black pepper. The bitterness in the smoke is gone, replaced by a vegetal aftertaste. At this point, the cigar is enjoyable as it tones down in strength. But the flavors are still not balancing with one another.

In the final act of the Curses, the flavor profiles became even lighter with flavors of blond roasted coffee, sawdust, almonds, and cocoa dust. The retrohale is delightful as I get vanilla, oak, sweet hay, and white pepper. The smoke was so smooth and silky that I was able to retrohale the whole puff without any discomfort.

As I’m arriving at the nub, about three inches left, the Curses decides to reshape the whole flavor profile and introduce a creamy element into the fray, ending my experience with flavors of mocha latte, sawdust, and oats.

Like a villain, the Curses teased my palate throughout the whole smoking experience. Unfortunately, each third felt incomplete as it was missing an element needed to balance out the flavor profiles. It wasn’t until the very end where the missing component makes an appearance and harmonized the flavors. But by that time, I had to put out the cigar as it began to burn my fingers. Perhaps the fantasy miniseries was meant to be smoked back to back in a specific order — like a hero tale, where the end of one leads to the beginning of another. 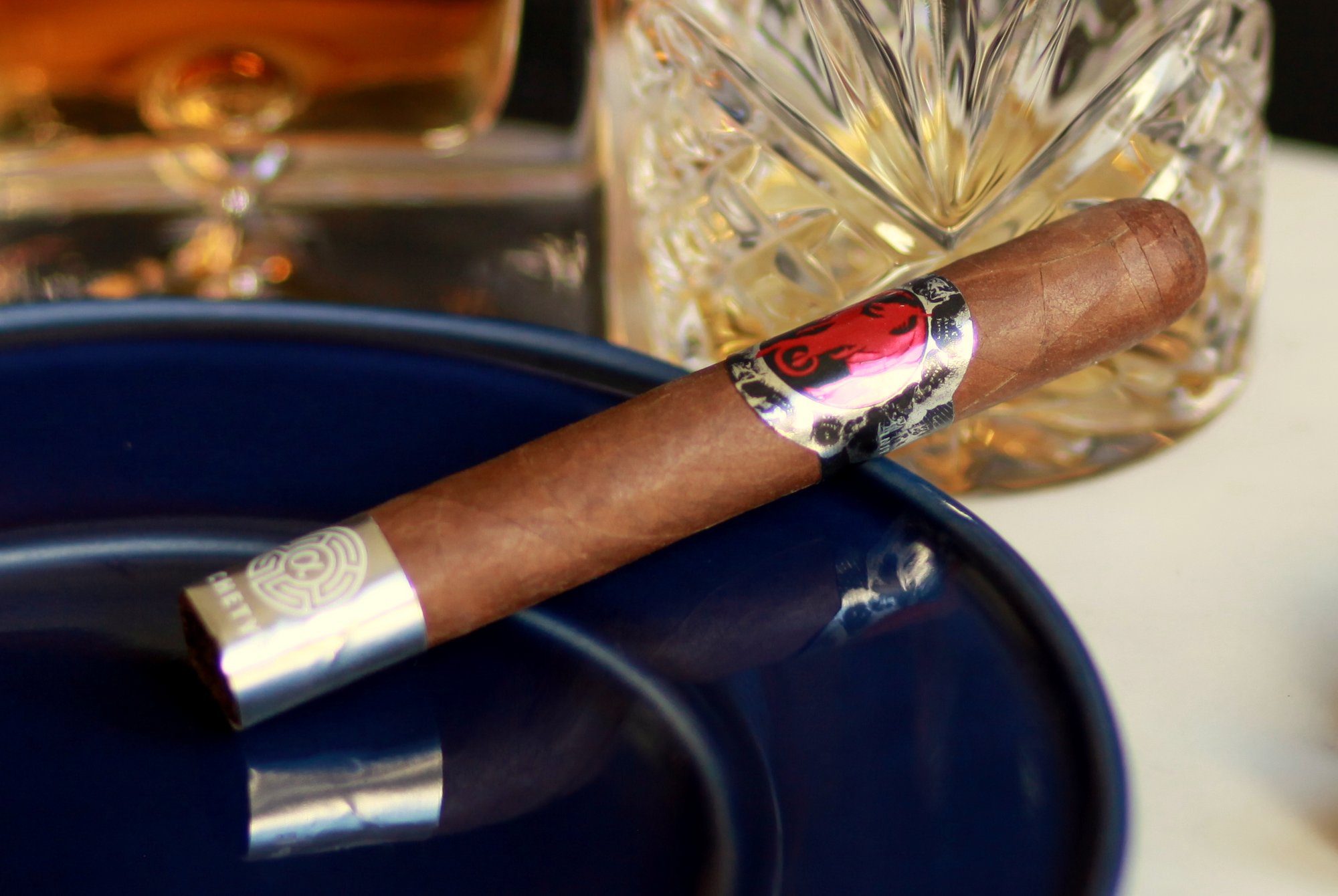 It’s always a treat to review a cigar you’ve never heard of before from a producer you might not know as well (in this instance, Drew Estate’s La Gran Fabrica factory). It’s an opportunity to go outside your comfort zone; to potentially get a fresh perspective, and maybe even find a new go-to cigar. That’s why this article features the Archetype Initiation Corona, a cigar produced by Ventura Cigar Co. This is also a nice change of pace for yours truly by virtue of it being the first time in a long time reviewing a corona size.

The Archetype makes a memorable first impression by way of being rather unusual. The cold odor is an interesting mixture of bread and earth. The stogie itself is incredibly tightly packed. On the bright side, this also means that this robusto is guaranteed to be soft-spot free, making a fully even burn all the more likely. Additionally, the wrapper is quite smooth in texture and is rolled together absolutely flawlessly, from the foot right up to the cap. With this kind of initial impression, I’m quite curious. 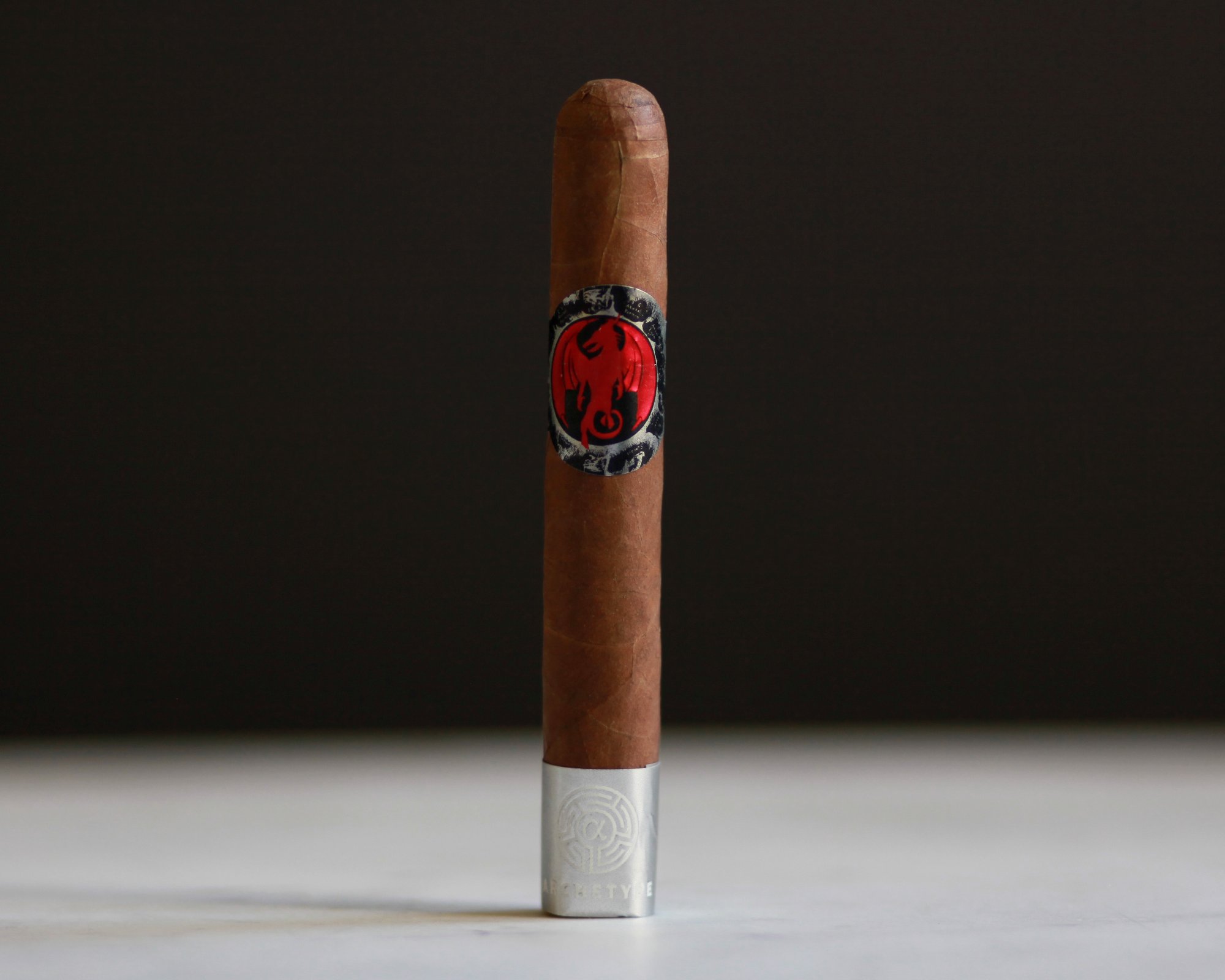 Given its especially tight packing, the Archetype Initiation predictably starts off with a draw that’s a bit too tight for comfort. In fact, the draw seems to be so tightly put together that the filler constricts the cigar’s own flavor profile; a barely discernible and slightly under-matured combination of salt and cedar. Another consequence of the tight packing is that the draw has no texture to it, leaving little to no sense-based indication of whether or not the cigar is being smoked in the first place. Additionally, the entire first half of the body becomes heated up quickly, and the burn has a tendency of fizzling out quickly as well. However, the smoke clouds are surprisingly mildly thick for such a tight draw, and the evenness of the burn is absolutely flawless from the get-go. And in spite of the incredibly tight draw, the retrohale has a robust element of spice to it.

This is where things begin to improve. The flavor profile takes on a nice hint of coffee in the background to compliment the salt and cedar in the foreground. Additionally, the draw begins to develop a smooth, creamy texture that helps to make the flavor profile a bit more prominent. And what’s best of all is the cigar begins to emit that immensely satisfying crackling sound at the foot that I know and love so much. The Archetype Initiation suffers two major setbacks on the second third, however; the wrapper unexpectedly begins to unravel slightly near the foot, and the burn eventually begins to canoe, albeit only slightly. The second third fortunately ends on a slightly more positive note, as the robust spice that had been absent from the retrohale near the end of the first third makes its way back and advances onto the palette.

The cedar wood that had dominated the flavor profile since the very beginning now begins to intensify and expand beyond the flavor profile, marking the palette with a strong wood aftertaste. The burn finally evens itself out in time for the flavors to converge, but the wrapper sadly continues its streak of mild unraveling right up until the end. What’s more, the convergence of the flavor profile’s various notes are sadly obstructed by a draw that, in a move I thought impossible, becomes even tighter than before. Yet, this tightening is followed by thicker smoke clouds than before, which offers a certain degree of consolation.

From a draw tight enough to constrict the flavor profile to a wrapper that boasted less structural integrity than the wrapper’s appearance suggested and everything in between, the Archetype Initiation was riddled with problems from the get-go. Yet, there is a silver lining to this tale. The positive elements of this cigar were not only satisfying, but unique; the burn was remarkably even throughout, and when it canoed, it was barely noticeable before it corrected itself. The way the spice was able to weave its way into every area of the smoke was also a first, and the creamy coffee texture on the draw was to die for. In short, the Initiation has a very long way to go, but its got a great start on the path to perfection.

Inviting cigar aficionados to “Reach into the Dark to Find the Light,” Ventura Cigar is pleased to reveal PSyKo Seven Connecticut, the third blend in its much-admired PSyKo Seven Collection.

PSyKo Seven Connecticut is expertly crafted in the Dominican Republic with an exclusive blend of premium of seven tobaccos. It sits apart from others in the PSyKo Seven collection with its lighter wrapper, serving up a more mild-bodied experience. This smooth cigar invites enthusiasts to disconnect from chaos and commotion, to take a step back from the reality of the everyday, and enjoy a rich, flavorful experience. 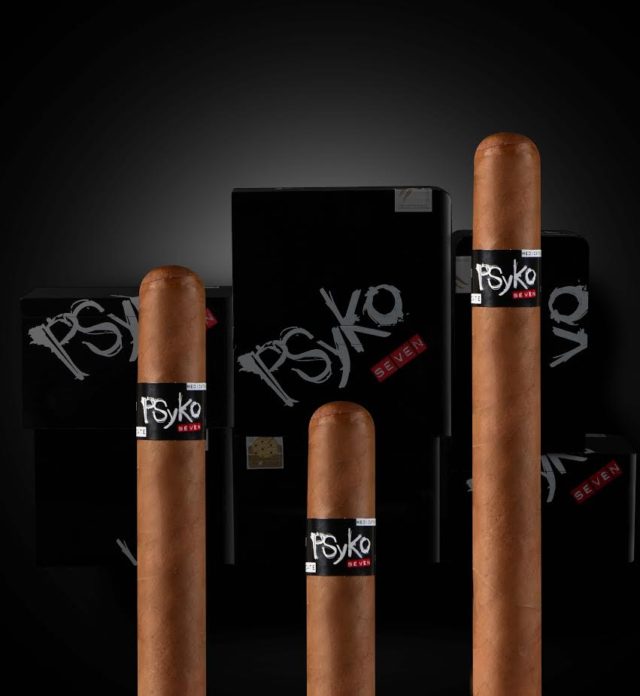 Housed in a sleek, black box, and enveloped with a white prescription form that encourages people to “medicate their mind,” there are three vitolas available: Robusto 4.75 x 50, the Toro 6.25 x 48, and the Gordo 6.00 x 60.

“The PSyKo Seven Collection has enjoyed a lot of attention,” says Jason Carignan, Chief Marketing Officer at Ventura Cigar Company. “It’s known for offering up high quality sticks at a great price, earning 90+ ratings from top cigar publications.  It’s a favorite of both the retailer and the consumer, so we added PSyKo Seven Connecticut to round out the line, and give our enthusiasts more to explore, and more to connect with.”

A solid choice to pair with friends and family, PSyKo Seven Connecticut will enrich and relax holiday festivities with a post-meal smoke and a dram of whiskey. All three vitolas will be shipping to retailers in late November. Please visit venturacigar.com for additional information.