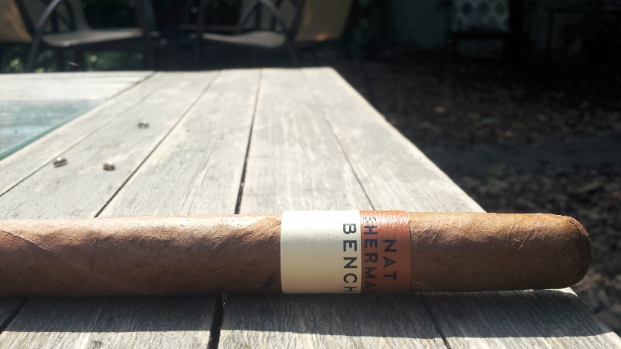 Since coming under the management of Michael Herklotz (formerly of Davidoff), the Nat Sherman Townhouse has become something of a second home to me. The selection is fantastic, there is more seating than ever before (minus access to the Johnson lounge downstairs), and the staff is knowledgable and friendly. So when I asked what was new, a gentleman kindly pointed out the new Bench Collection cigars. The first such cigar up for review is the L-IDD, which, from La Aurora, sports a unique Indonesian wrapper that I’m excited to smoke.

From the blog of Michael Herklotz,

La Aurora, the Dominican Republic’s oldest cigar factory, has teamed up with Nat Sherman to offer two very special cigars to the Tobacconist’s loyal customers at their Flagship Townhouse Store.

These cigars were manufactured in 2007 in their Dominican factory. The blends were part of the development of the La Aurora Excepcionales, a cigar made exclusively available to a small group of New York City retailers.

“We had three blends we really liked”, said Michael Herklots, who worked closely with La Aurora’s Manuel Inoa on the project. “Ultimately we chose a blend for the Excepcionales, but there were two other blends that we really liked and decided to make a very small production of them to use sometime in the future.” On a recent visit to La Aurora, Herklots inquired about the small production of the other two blends. And, fortunately for Nat Sherman, they were resting in the company’s vast aging room.

Both cigars are available in limited quantities boxes of 20 cigars

This is not the most beautiful cigar my eyes have ever beheld. There are a few blotches on the Indonesian wrapper, and the color is (unsurprisingly) not quite like most cigars – sort of a light brown with a slightly reddish hue. The band, with the traditional Nat Sherman color scheme, says Nat Sherman “Bench”.

Otherwise, the construction is pretty much flawless, there are minimal viens, the wrapper is slightly oily, and the city is springy to the touch. After using a straight cut on the triple capped head, I find the draw to be about average. 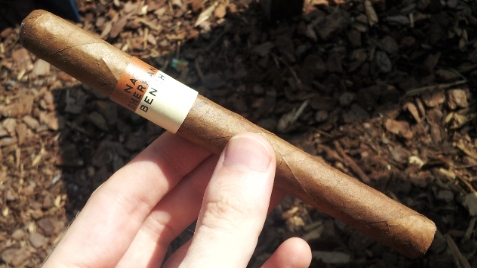 Before lighting this cigar, I take a whiff of the foot of the cigar. Apparent is a sort of woody smell, and something else that I can’t quite put my finger on and am hoping shows up a bit more discernably when I light.

The second the smoke touches my lips, I’m tasting a very unique and powerful sweetness that I haven’t experienced in any cigar I can remember. It is also, delicious, with tinges of milk chocolate, butter, and the slightest tanginess on the retrohale. 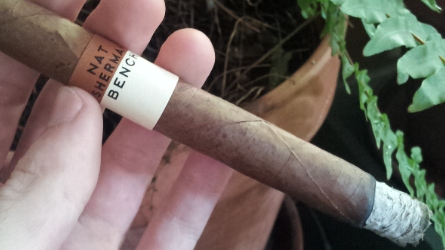 As I hit the second third, a few things are apparent. First, the ash has a hard time staying put – it burns perfectly straight, but tends to fall quickly. Second, the wrapper is delivering lots of flavor with this vitola. The strength of the smoke continues to build, making sure I don’t get bored with this cigar.

The final third sees the body and strength of the smoke increase, and the retrohale gets significantly more spicy. 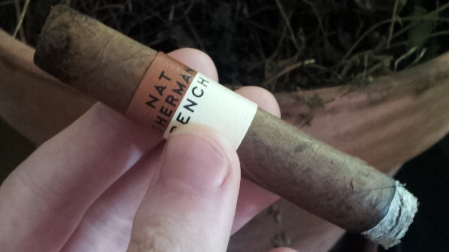 The Nat Sherman Bench L-IDD is a cigar worthy of the Nat Sherman name. I found it to be complex and very flavorful, mostly thanks to the lancero vitola. It isn’t a cigar I would smoke every day, partially because the flavor profile isn’t one that I typically smoke, but it is a great morning cigar. Pick up a few of these before they are all gone!

Brand evangelist, digital marketer, cigar and spirits expert specializing in consumer tasting and educational events. Matthias made the long trek from his hometown of Portland, Oregon to New York City in 2007, and in nine years has hosted more than 120 events and helped promote and launch dozens of cigar and whiskey brands in the U.S. In 2016, he joined the Cigar Journal Tasting Panel, blind-reviewing pre and new release cigars.
« Cigar Review: Hispaniola Connecticut» Cigar Review: Casa Magna Domus Magnus Limitada