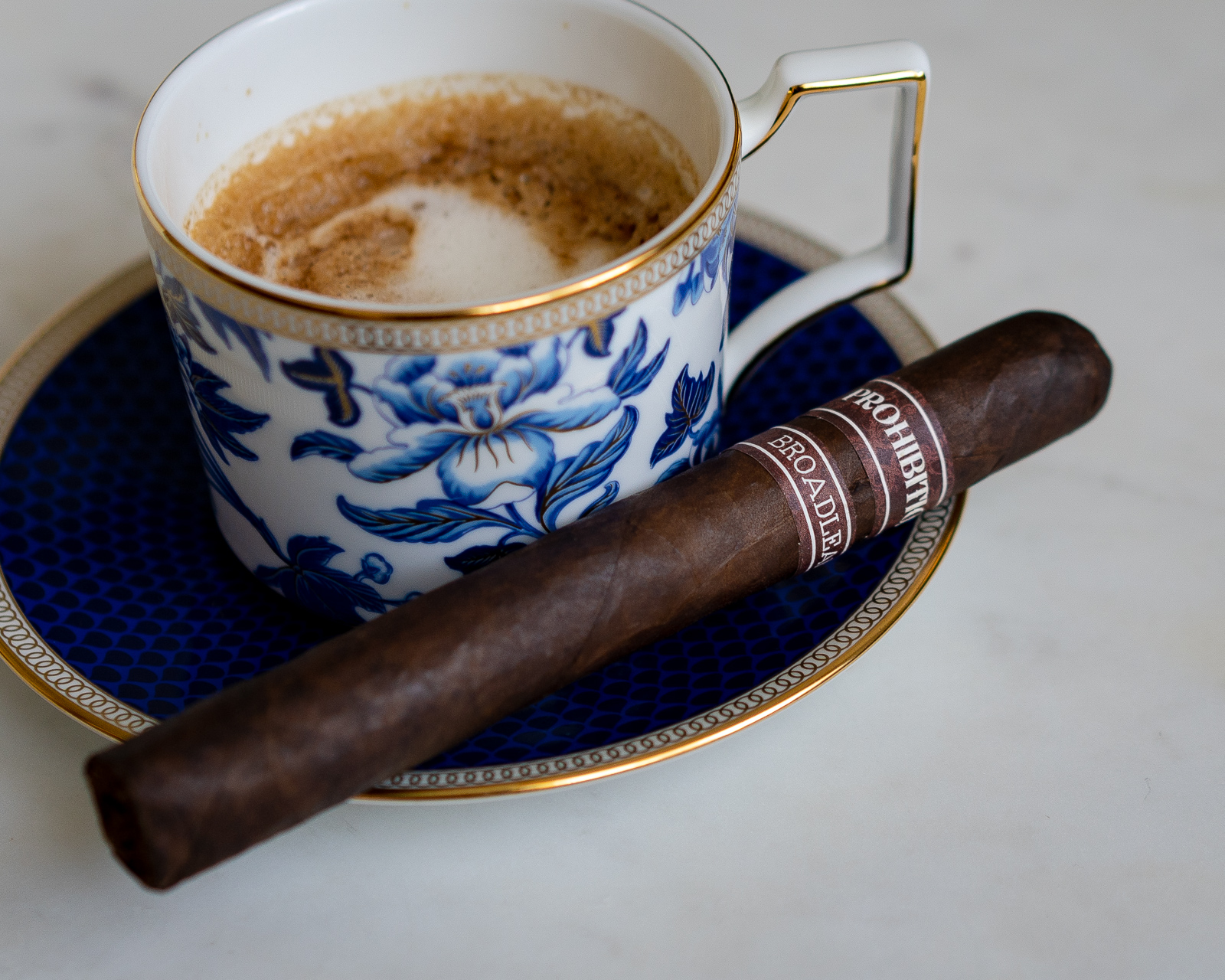 If you haven’t had at least one Rocky Patel cigar, you haven’t smoked much. Rocky makes an enormous amount of lines, from premium levels to catalog only sales. Many are fine cigars which have yielded solid ratings while others are budget conscience mid-level quality smokes that are easily cast off into the realm of catalog marketed cigar deals. I’ve smoked Rocky’s cigars since the boom days when he was Indian Tabac and enjoyed a lot of his smokes.  With so many lines, though, they can get lost in a market with so much quality product from so many countries.

With his Prohibition line, Rocky puts it to the Food and Drug Administration’s attempt to create a stranglehold on premium cigars with heavy restrictions and an archaic mindset. Rocky reminds us how Prohibition did not work in this country and cigars would be the same story. His Prohibition line comes in a single Toro size with three different wrapper choices of Connecticut, Connecticut Broadleaf and a Mexican San Andres. I was able to check out the Connecticut Broadleaf for this review. Read on!

The Prohibition Broadleaf has a nice sheen to its silky wrapper. The cigar is firm to the touch, filled with tobacco and there are noticeable veins running around the circumference. The band is simple, but stands out in its simplicity sporting a brown band almost matching the broadleaf wrapper. The word “Prohibition” is in white and a secondary band in the same format with the word “Broadleaf” denoting the wrapper on the cigar.

I clipped the Prohibition using a straight cut with my Xikar Wooley Mammoth cuter. The dry draw delivers raisinated flavors and dry wood. With a long match I gently toast the cigar, with the first puffs delivering lots of smoke and notes of paper and char. As the Prohibition warms up, milk chocolate comes to the forefront followed by a light earthiness. The chocolate continues with a bit of forest floor on the tongue. Thee retrohale yields much of the same. At this point, there’s not much to this cigar, but there’s nothing off-putting about it.

Midway through the Rocky Patel Prohibition Broadleaf, there’s notes of earth and a dustiness that become a bit drying on the mouthfeel. The smoke continues to deliver chalky notes with a bitter finish, with the ash at this point gray and flaky with a wavering burn line. Some fleeting black pepper comes through on the retrohale, and the chalkiness subsides, replaced with sandalwood and char and a short finish. At this point, the cigar is billowing with smoke, and yields notes of almond paste and cashew.

The Prohibition burns quicker than typical for a Toro size, and the last third brings forth notes of nutmeg and toasted oak.  As the cigar finishes up, leather starts to dominate with some minerality. On the retrohale are hay and walnuts. Smoke production remains copious, with a light gray ash.

With the last few puffs, there’s more char with a short bitter finish. A lackluster end which forced me to put the cigar down.

I respect Rocky’s concept and message with a cigar called “Prohibition” as he has been a staunch fighter for cigar smoker’s rights. I feel with the broadleaf version of the Prohibition” at least the execution was not up to par. There was too much bitterness along with short notes in flavors which indicated to me an issue in tobacco processing and the blend itself. Where the flavors of chocolate, wood and nuts were pleasant they were overshadowed by chalkiness and too many charry notes. The cigar never developed in character despite smoking slowly and trying hard to coax out flavors. Perhaps trying the Connecticut and San Andre’s wrappers will deliver something more interesting in the Prohibition line.

Reviewers note: this is a non-blind review.

Christian offers a perspective of cigars ranging from vintage pre-embargo smokes, hard to find cigars as well as current releases. His 22+ years of smoking and love of travel have taken him on cigar journeys here and abroad. From smoking HERF’s in friends backyards to smoking Montecristo No. 2s on the terrace of the Hungarian Palace Hotel in Lido Italy, Christian takes the “everyman” approach to cigar smoking being it all about taste and enjoyment of where you are or who you are with.
« Nat Sherman Bench 2018 No. 1 Review» Fonseca Cubano Limitado Robusto Review