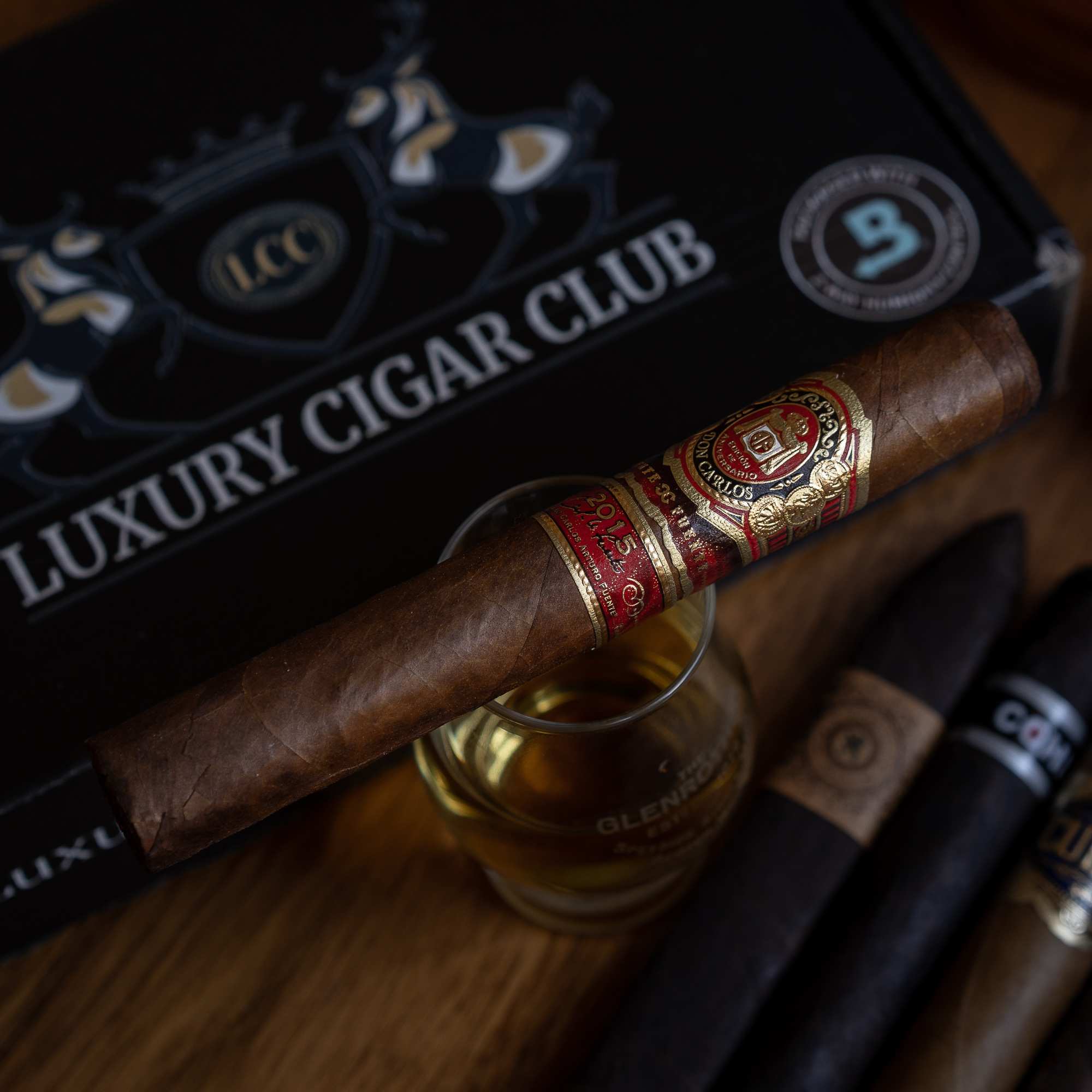 As is typical with Arturo Fuente cigars, the Don Carlos Edicion de Aniversario 2015 is impeccably branded and has a celebratory quality to it. The outer wrapper has a visible oily sheen and a smooth feel to the fingers.  Taking a whiff off of the foot, I pick up rich notes of earth, hay, and garden vegetable notes. There’s also a slight cinnamon sweetness that I hope shows up in the smoke. The cold draw is malty, with some granola and spicy white pepper.

The draw is perfect.

When the Don Carlos Edicion de Aniversario 2015 ignites, it produces large plumes of white, medium bodied smoke. Generally, the flavor profile falls in the savory, bitter, and spicy flavor categories. On the draw, the smoke is quite smooth, with a creamy entry. On the palate the flavors that emerge are vegetation, strong cedar, Wasabi spice on the tip of the tongue, and touches of creamy coffee that coats the palate. It’s the kind of flavor profile I’ve only ever found with Arturo Fuente cigars (open to suggestions for similar cigars). The retrohale is similar, with a healthy but not overwhelming amount of Wasabi spice and dry cedar. A great start. 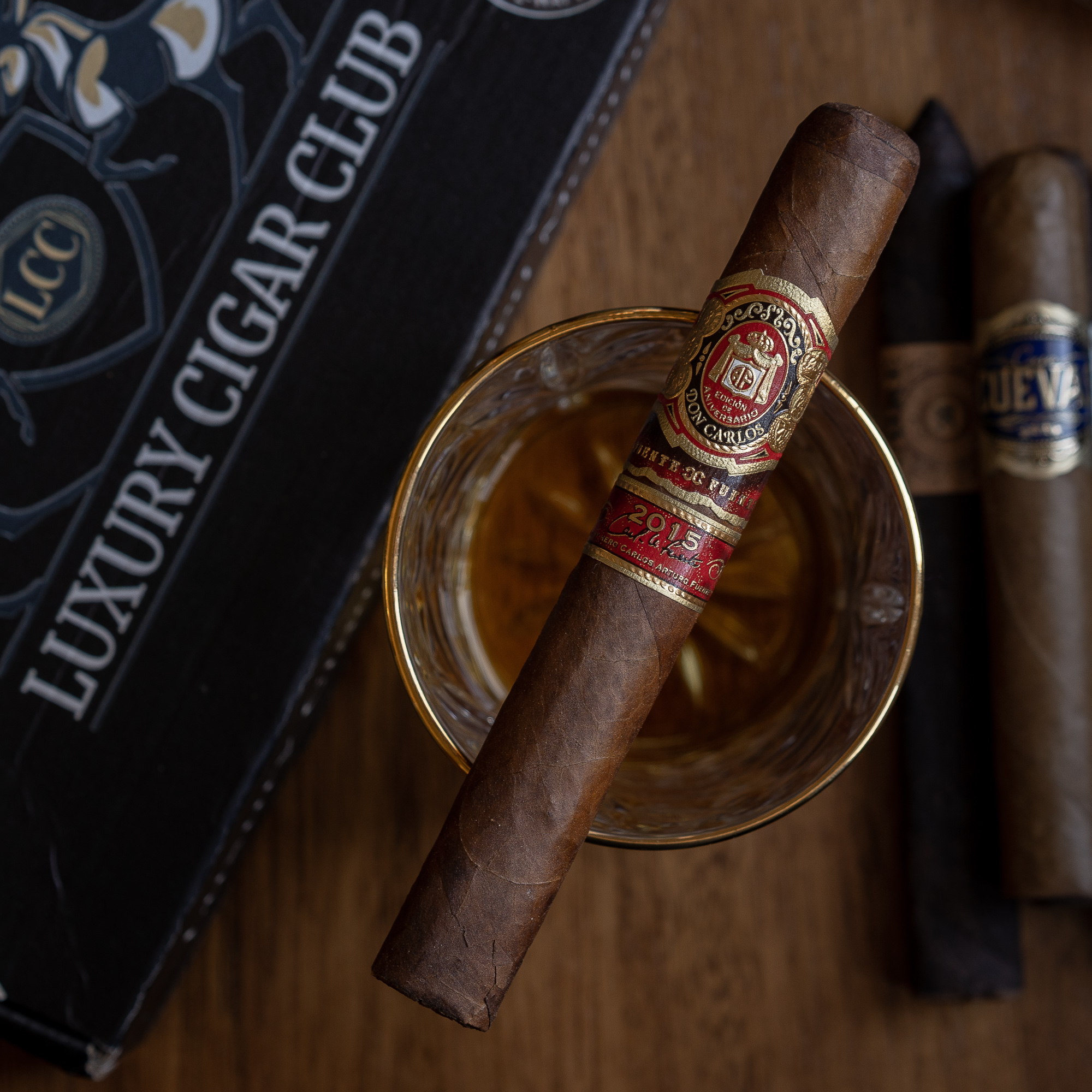 About ten minutes in, the rough edges on the flavors have smoothed out and the cigar is remarkably complex, harmonious, and balanced. The spice is perfectly measured next to the sweet cream, cedar, and vegetal notes, making it a joy to smoke.

The ash holds up until the beginning of the second third, and the burn remains mostly straight when the ash finally drops. And, like clockwork, the strength of the smoke increases dramatically. Cedar takes the dominant role on the palate while the Wasabi note eases down to a secondary position, along with rich coffee bean, floral, and a creamy finish. The retrohale is smooth, but still full of white and red pepper. It’s great transition for the overall experience.

The Don Carlos Edicion de Aniversario 2015 smokes this way until just about the final third, where it ramps up in strength and body even more, landing at medium to full body and full strength. On the palate are predominantly bitter notes of vegetal, cedar, Wasabi and coffee beans. Unfortunately, the cream that balanced those flavors out in the first two thirds disappears, but the smoke is still very smooth. The retrohale on the other hand has large helpings of hot spices that clear the sinuses. It’s not quite as compelling of an experience as the first two thirds, which is a bit of a let down given how spot on the rest of the experience was.

Even with a slightly weaker final third, the Don Carlos Edicion de Aniversario 2015 is an excellent cigar and I can wholeheartedly recommend it. The flavor profile has great complexity, featuring just about everything I love about Fuente cigars: well proportioned spice, cedar, floral, and wonderful creaminess that balances it all out. The final third couldn’t quite live up to the two thirds leading up to it, but it is still an all around excellent cigar that I think justifies the high price tag.

Brand evangelist, digital marketer, cigar and spirits expert specializing in consumer tasting and educational events. Matthias made the long trek from his hometown of Portland, Oregon to New York City in 2007, and in nine years has hosted more than 120 events and helped promote and launch dozens of cigar and whiskey brands in the U.S. In 2016, he joined the Cigar Journal Tasting Panel, blind-reviewing pre and new release cigars.
« Casa Magna Colorado Boxed Pressed Toro Review» Sobremesa Corona Grande Review