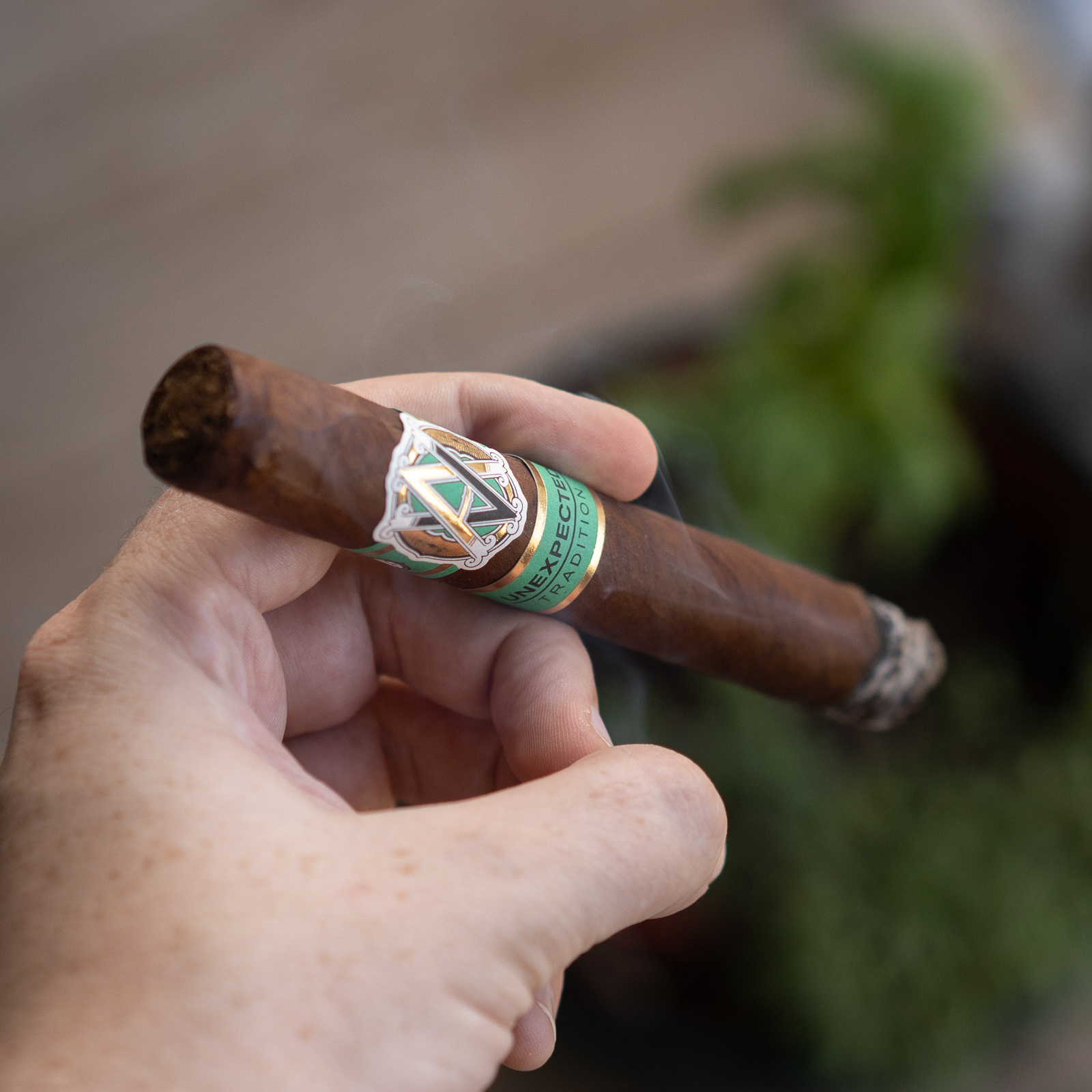 As mentioned on other reviews, I’ve been a huge fan of AVO Cigars since getting hooked on their Classic Covers line which to my great sorrow was discontinued. I believe these were some of the brands greatest blends, so it’s heartbreaking to see the number of retailers carrying them dwindle to zero. So with any new AVO release, I’m always hoping that they’ll bring something back that’s similarly powerful, complex, and enjoyable.

There’s only one way to find out if the Unexpected Tradition fits the bill. Let’s light up.

The most striking thing about the AVO Unexpected Tradition is its marvelous wrapper, which has a very attractive golden dark brown coloration, a fine texture, and one or two major veins. What’s not impressive is the triple cap, which was applied so lazily that the top cap is actually hanging off of the cigar. Not a good sign but the problem is resolved when I cut the cigar. 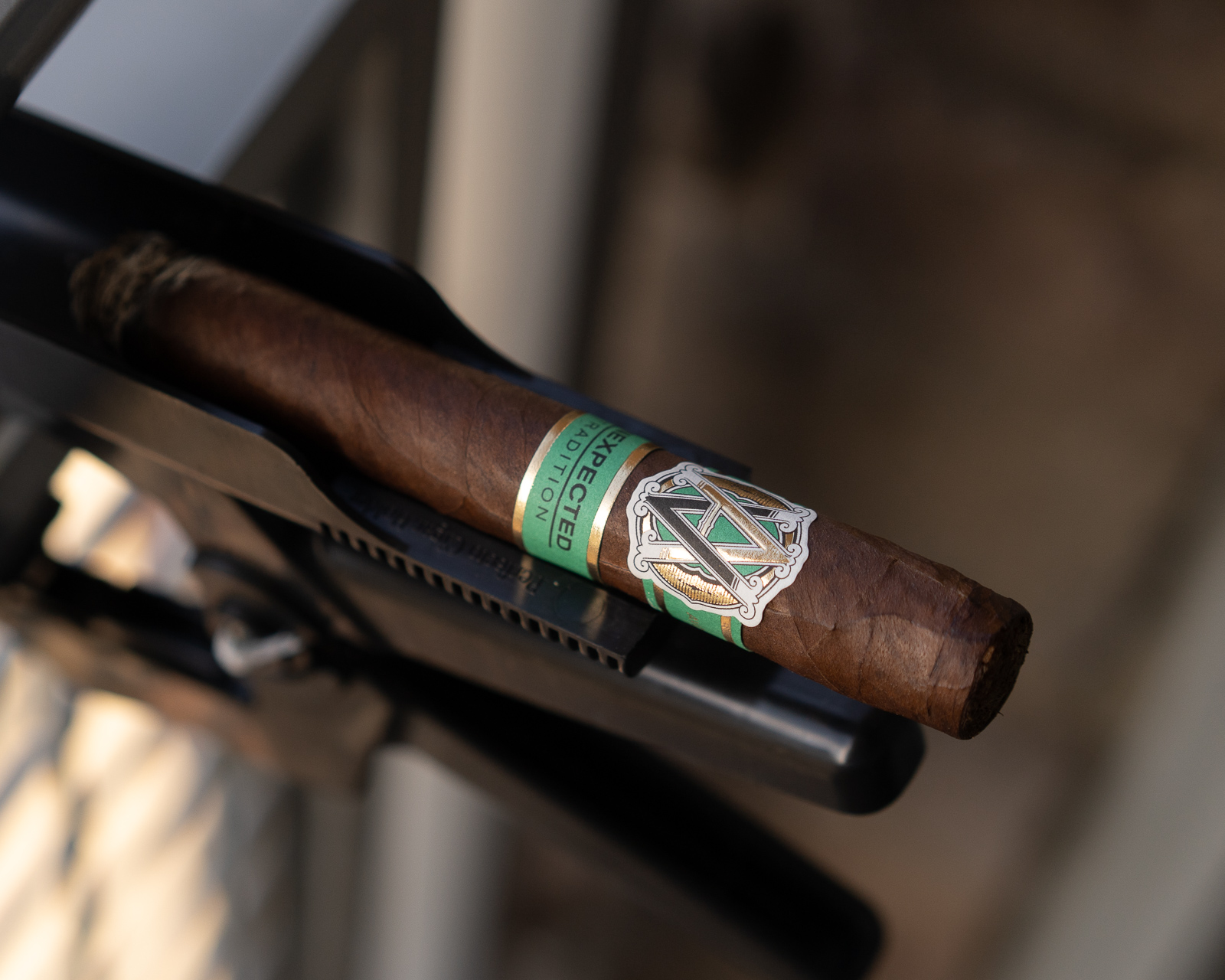 The draw is fairly unrestrictive, about a 6/10 in terms of amount of restrictiveness. The cold draw is traditional (heh) AVO, with some wood, light spices, and a sweet fruitiness. The aroma off of the foot is tantalizing, and quite sweet, with barnyard, cocoa, baking spices, and forest (moss + tree bark).

Once lit, the AVO Unexpected Tradition generates quite a bit of tasty, spicy smoke. I’d describe the flavor categories (in order of prominence) as spicy, bitter/salty, and sweet. The spicy notes are of grilling spices and grilled bell peppers, with bitter wood coming in second and sweet chocolate and cream on the finish. Body I’d put at just under medium, with strength just above medium. Smoke production is good, and after half an inch the burn seems in good shape and the salt and pepper ash is holding strong.

By three quarters of an inch in, the AVO Unexpected Tradition starts to evolve, with the fruit note from the smell off of the foot of cigar entering into the mix, and a charcoal note saddling up alongside it that actually complements the sweetness of the fruity note quite well. At this point, the cigar is erring on the side of sweetness and both body and strength have met in the middle at medium. 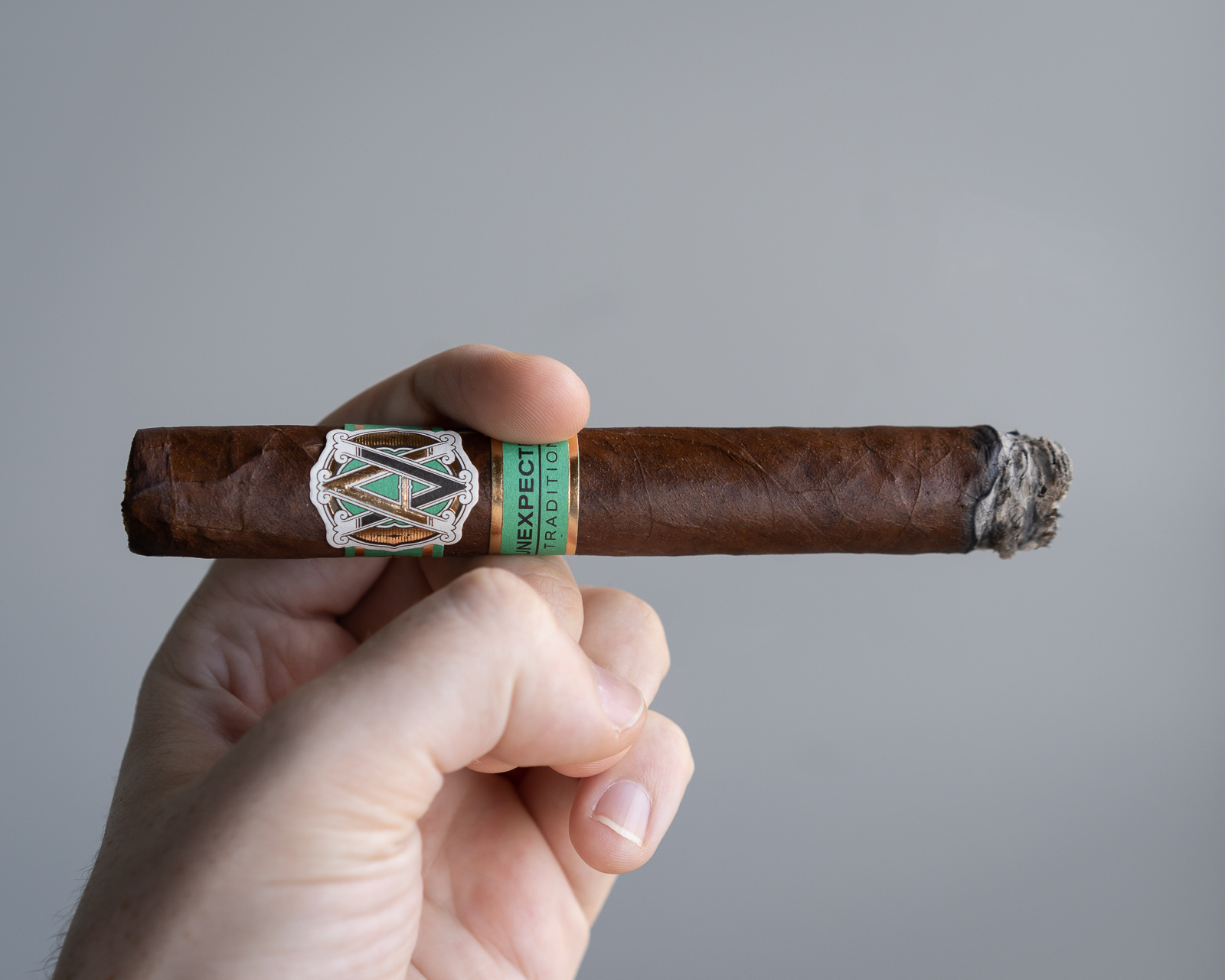 As the ember reaches the beginning of the second third, the cigar evolves even more, with the body and strength both climbing back up above medium. The smoke is impressively flavorful, with balanced notes of charred wood, fruit, creaminess, and that traditional AVO grassiness. The retrohale is a bit simpler, with just some dusty wood and a bit of the fruit from the palate. It all comes together quite nicely, though the smoke is fairly astringent which means a glass of water is a good thing to have on hand. Construction is still excellent, with just a slight waviness in the burn.

The cigar continues on in mostly the same way, though with some resurging spice, until close to the final third, where a nice vanilla note peeks through on the palate and the aroma of the smoke. There’s also a bit of savory spice as well, alongside primary notes of charred wood, creamy chocolate, and vegetal. The smoke is also a lot less astringent, which is nice. But it does really begin to heat up at about an inch and a half from the finish line, muddying the flavors and introducing harshness. So, not a perfect ending, but still a wonderful cigar.

I haven’t been wowed by many of AVO’s newer releases, but I loved the AVO Unexpected Tradition. It has everything I like about my favorite AVO cigars, and then some.  Excellent flavors of charred wood, fruits, cocoa, AVO grassiness, vanilla, spices and much more. And more impressively, the smoke is mostly in balance the whole way through, giving that great impression of the cigar experience being akin to a full meal. The only flaw shows up in the final third, with the smoke heating up and becoming a bit harsh.

If they had released this cigar as the annual limited edition cigar, I’d be totally satisfied. So I’m even more happy then because this cigar has the added benefit of being a regular production blend.

Highly recommended. A very well thought out and executed blend.

Brand evangelist, digital marketer, cigar and spirits expert specializing in consumer tasting and educational events. Matthias made the long trek from his hometown of Portland, Oregon to New York City in 2007, and in nine years has hosted more than 120 events and helped promote and launch dozens of cigar and whiskey brands in the U.S. In 2016, he joined the Cigar Journal Tasting Panel, blind-reviewing pre and new release cigars.
« Montecristo Espada Oscuro Review» My Father La Promesa Review