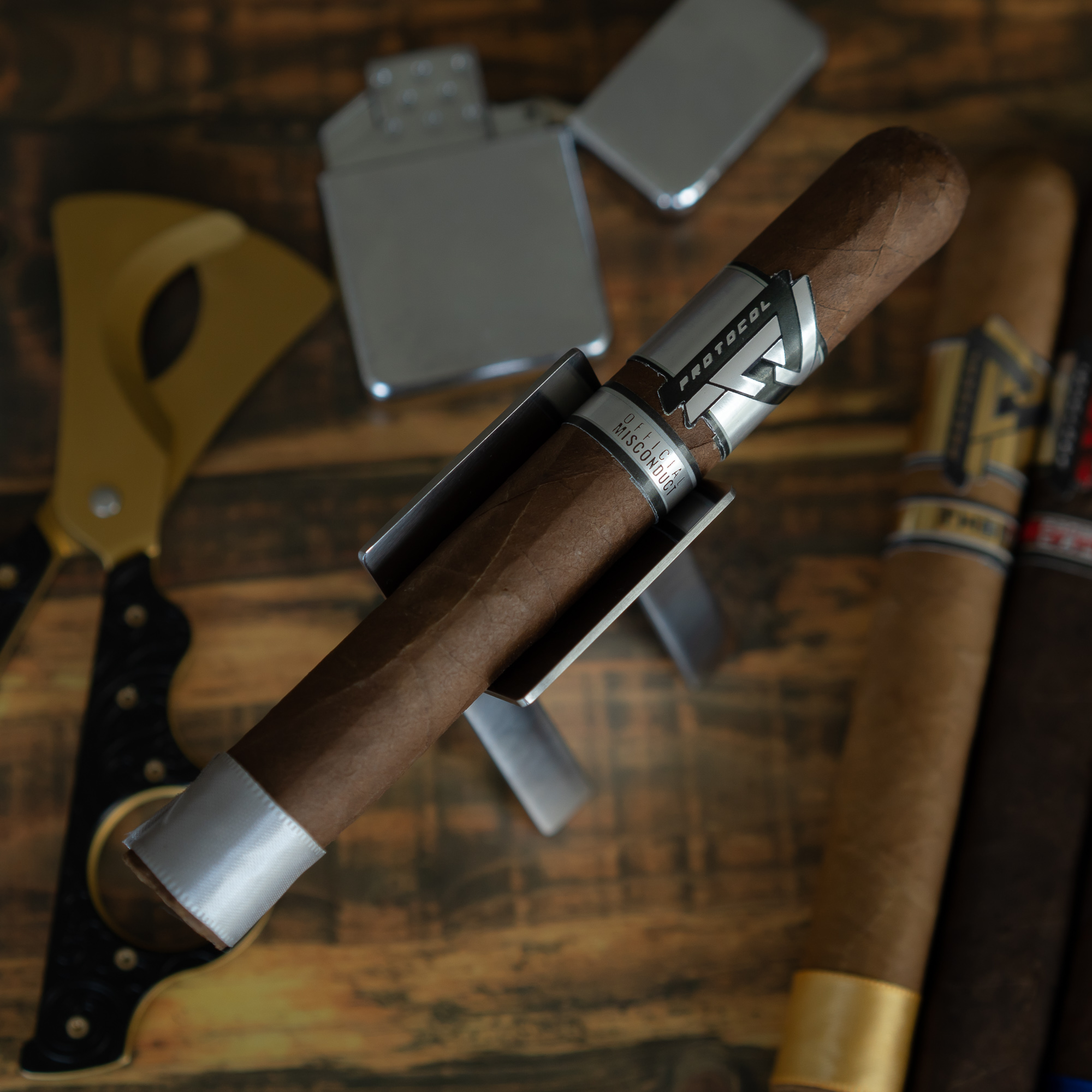 Up for review today is the Protocol Official Misconduct in the Corona Gordo size (5 5/8″ x 46). The cigars are made at Erik Espinosa’s La Zona factory in Nicaragua, a factory that produces (in my opinion) some of the most flavorful cigars on the market. I’ve likened La Zona in the past to Campbeltown, a region known for single malt flavor bombs like Springbank.

In any case, let’s light up and see how the cigar performs.

The outer wrapper of the Official Misconduct has a few minor veins and a slight sandy texture to it. Visually the cigar is striking, with a semi reflective silver and black double banding. The aromas are excellent: off of the foot are vibrant scents of fresh brownies, peanuts, butter, and light spicy woodiness. It’s the kind of aroma that gets me excited to get the cigar lit. 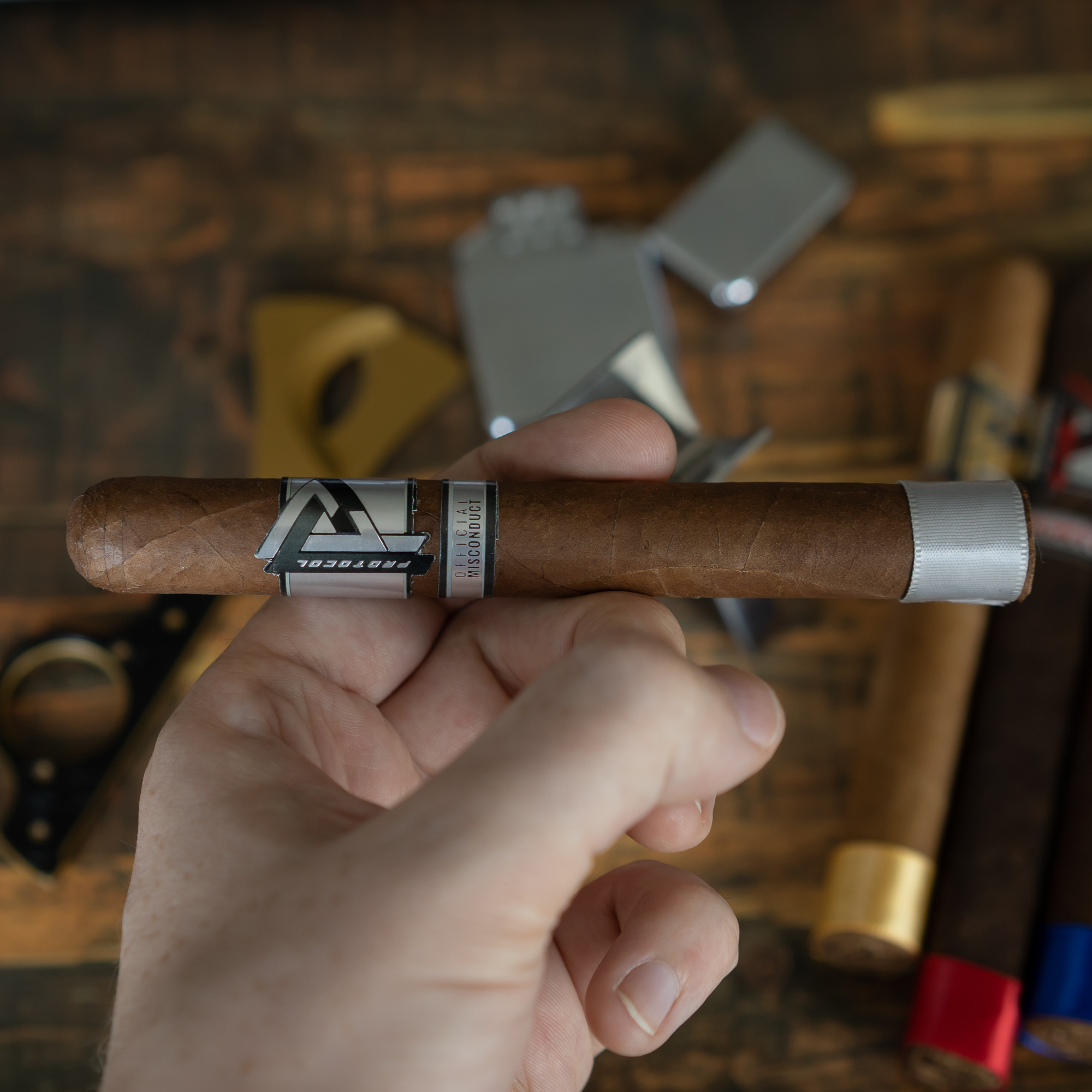 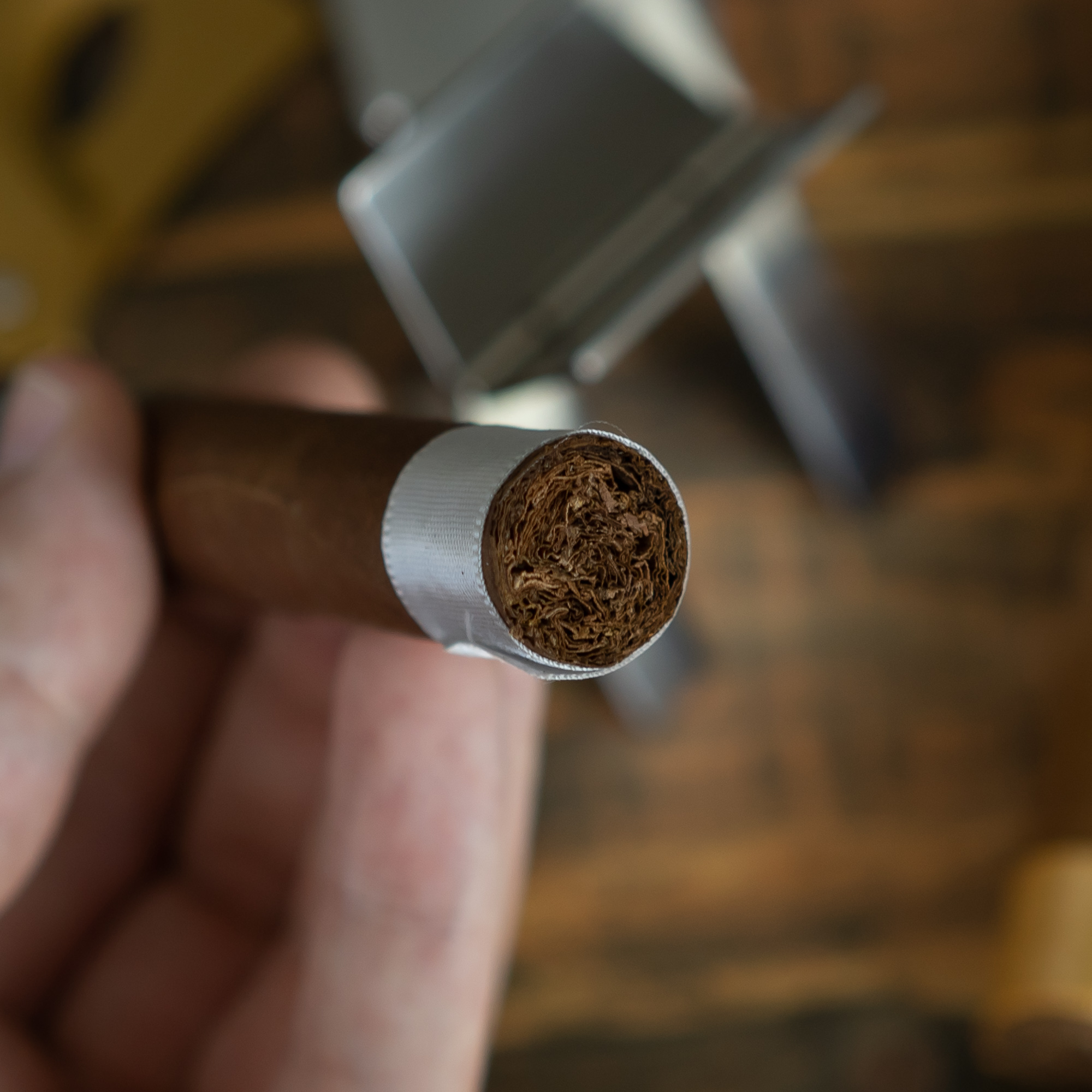 The Protocol Official Misconduct kicks off with copious smoke production and a flavor profile split between spicy, savory, bitter and sweet flavor categories. That is to say: it’s very complex. Up front is dry cedar and red pepper that hits the tip of the tongue, followed by slight sweetness and a creamy finish that coats the palate. The aroma is amazing, full of savory spices, wood, light floral and cocoa.

By the end of the first third, it’s the flavor bomb I expected it to be. Medium body, with flavor at 11/10.

As the cigar burns into the second third, the smoke takes on a slightly softer texture, and the profile is split between charred wood, hot spices, and cinnamon, with some pleasant sweet floral notes sometimes stealing some space. I’d peg both body and strength at medium plus, and I’m starting to feel the nicotine hit a bit more than most cigars. From a construction standpoint, the burn to this point has been mostly straight with the ash holding in increments of about an inch and a half.

The final third of the Protocol Official Misconduct doesn’t bring in much in terms of new flavors, but continues to shift the balance of flavors. The floral note on the nose takes a more prominent position, contrasting well with the spicier elements of the smoke on the tongue. The burn strays a bit near the end but a quick purge puts it back on track.

It sounds cliche but the Protocol Official Misconduct really is all about flavor—and it’s got loads of it. While the profile doesn’t change radically throughout the cigar, the balance between wood, spice, cream and floral notes continually shifts, keeping the experience interesting all the way through. An excellent cigar most suited for late afternoon or evening.

Brand evangelist, digital marketer, cigar and spirits expert specializing in consumer tasting and educational events. Matthias made the long trek from his hometown of Portland, Oregon to New York City in 2007, and in nine years has hosted more than 120 events and helped promote and launch dozens of cigar and whiskey brands in the U.S. In 2016, he joined the Cigar Journal Tasting Panel, blind-reviewing pre and new release cigars.
« Dias de Gloria Double Toro Review» Highclere Castle Victorian Cigar Review