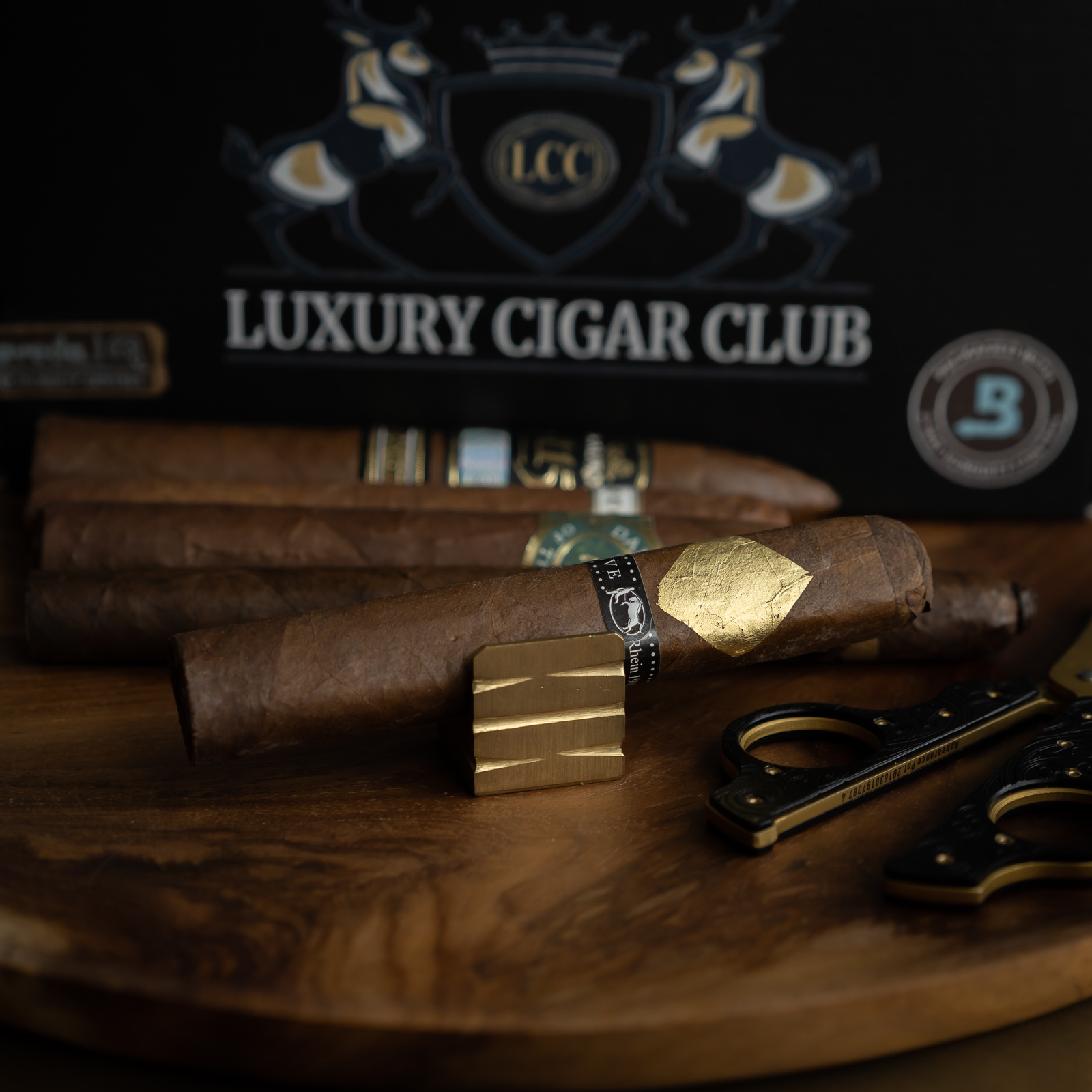 When the Cavalier Genève Series Black II hit my mailbox in a monthly package from Luxury Cigar Club, I was excited for two reasons. First, as a packaging nerd I was intrigued by the gold leaf that’s inlaid in the outer wrapper of the tobacco. Second, Cavalier Genève is a brand I’ve seen around quite a bit on social, which is always and indicator for me to listen up and take a product seriously.

The cigar is unorthodox to say the least. The diamond shaped gold leaf is pressed around the edges of the box press. The outer San Andreas wrapper has a rugged look and feel, with a sandy texture and a few minor veins. Off of the foot are notes of barnyard, light black pepper, salt and cedar. The draw is fairly restrictive, and it brings in flavors of dark chocolate brownies, pepper, and tingly spices. 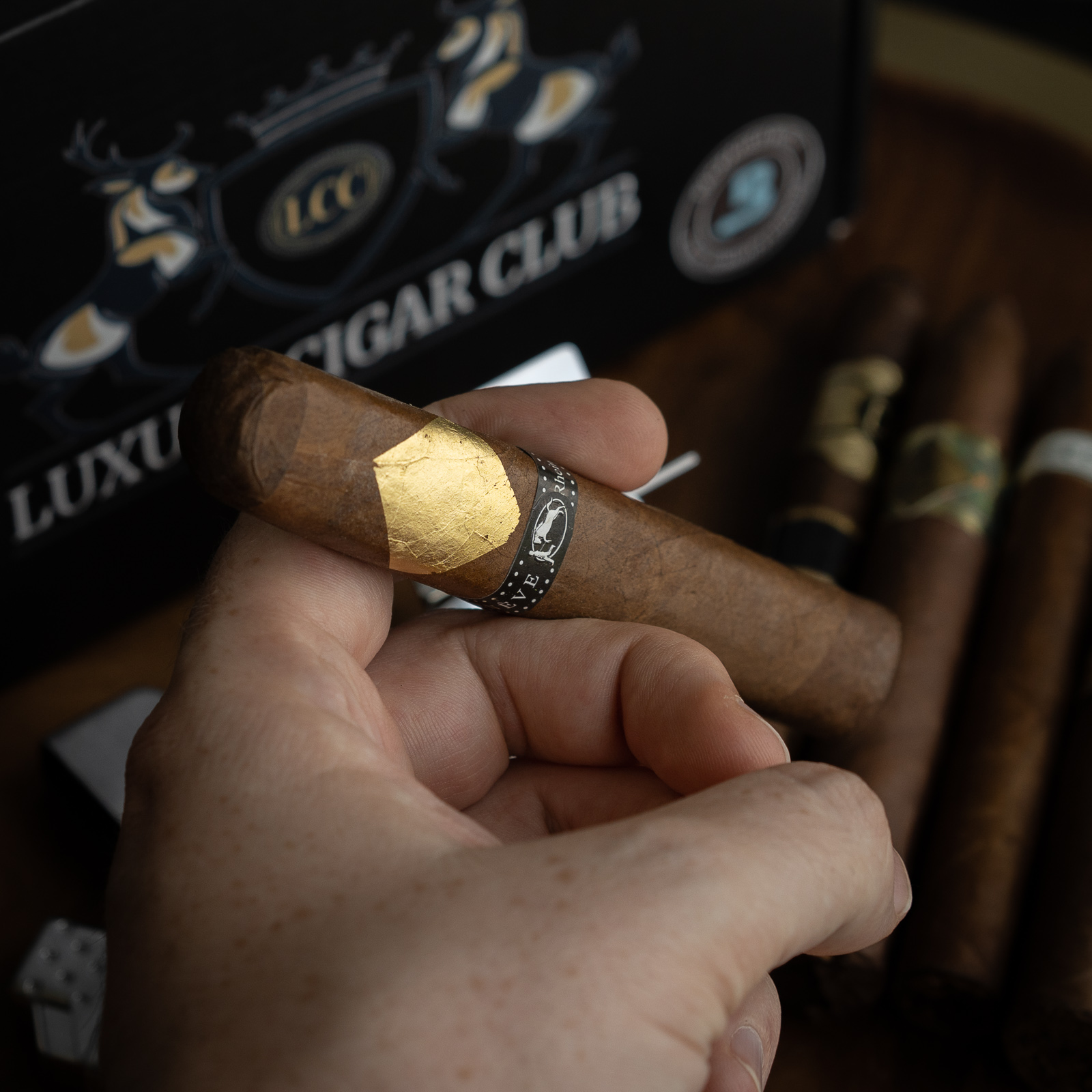 Once lit, the Cavalier Genève Series Black II produces a decent amount of medium bodied smoke, though the tight draw does seem to reduce the supply of smoke to a problematic degree. The smoke itself is rich and balanced between sweet, bitter and savory flavor categories, though there is some spice evident on the tip of the tongue. The sweet side features a very distinct creamy caramel note, along with some cinnamon. On the bitter side is a bitter paper note that seems committed to dominating the rest of the profile and definitely detracts from the overall experience. Not bad.

At an inch in, the ash is holding well. The cigar’s performance has improved somewhat, with a bit more smoke being produced and the paper note transitioning more to walnut. The retrohale though is still dominated by bitterness.

Thankfully, the Cavalier Series Black II turns around in the second third. I must have burned through the overly packed part of the cigar because the draw and smoke production suddenly improve, along with just about every other aspect of the experience. The flavor profile is much more harmonious, with oak, leather and orange peel balanced against sweet cream, toasted bread and some great baking spices. The retrohale clears up as well, featuring a heavier dose of spices and toasted bread.

The final third sees the strength and body of the Cavalier Genève Series Black II pick up markedly, passing medium and within stones throw of full. Unfortunately, with the increased strength comes the bitter paper note, which again threatens to overpower the rest of the flavors, which include heavy oak, burnt bread, hot spices, tanginess, cinnamon and vanilla. The gold leaf doesn’t seem to affect the experience much, though it does burn a bit quicker than the rest of the cigar.

To me, the Cavalier Series Black II is that new acquaintance that you want to like but just has too many glaring issues to establish a long term friendship with. Although it had some good moments, the good was too often overshadowed by construction problems and overpowering bitterness. That said, I’ve heard too many good things about this brand to disregard it, so I’m planning on exploring some of the other offerings from Cavalier.

Brand evangelist, digital marketer, cigar and spirits expert specializing in consumer tasting and educational events. Matthias made the long trek from his hometown of Portland, Oregon to New York City in 2007, and in nine years has hosted more than 120 events and helped promote and launch dozens of cigar and whiskey brands in the U.S. In 2016, he joined the Cigar Journal Tasting Panel, blind-reviewing pre and new release cigars.
« Highclere Castle Victorian Cigar Review» My Father The Judge Grand Robusto Review