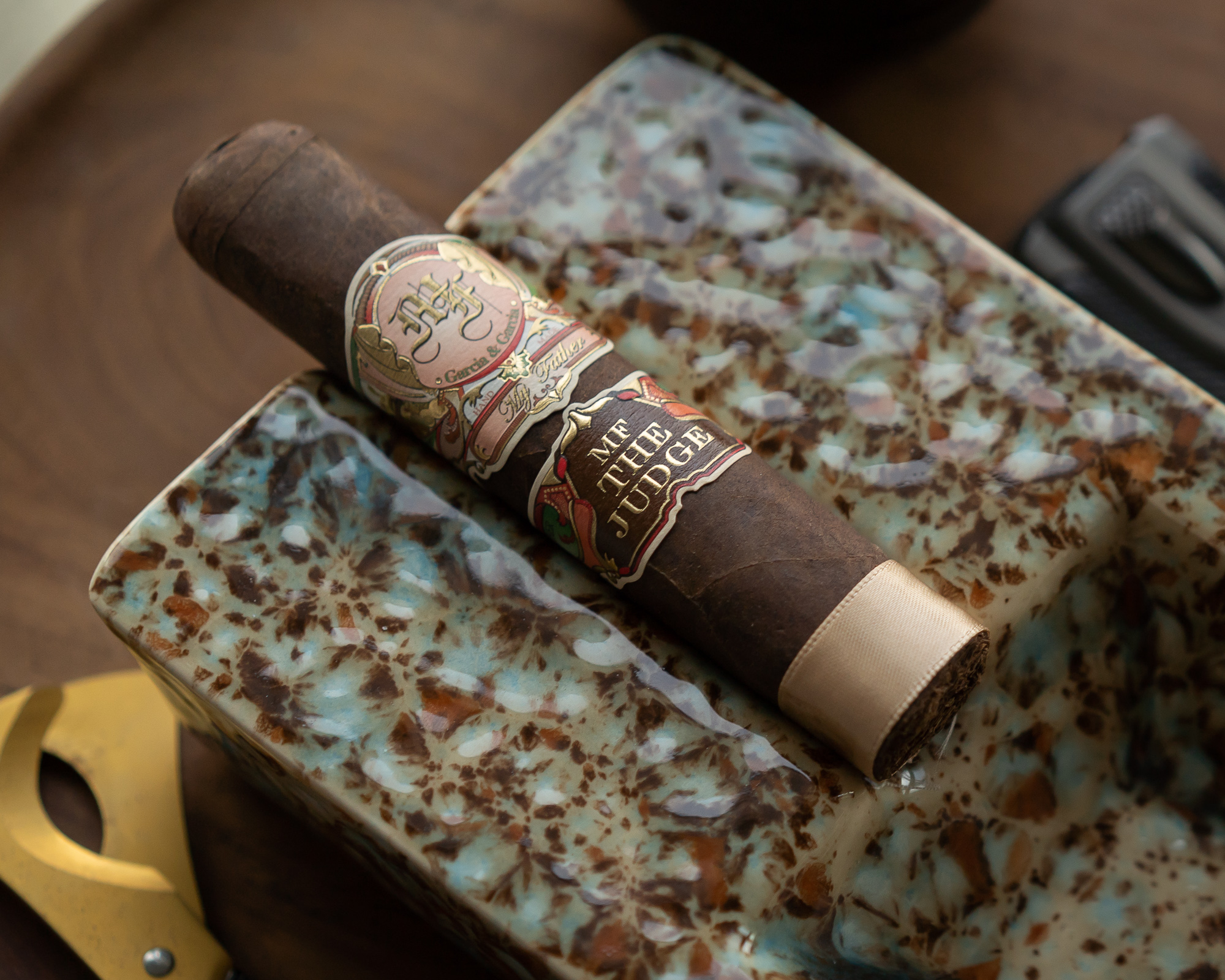 “Emotional roller coaster” is the term that comes to mind when describing my experience with My Father: The Judge. This cigar was first showcased at IPCPR 2016. The Judge was inspired by a dear friend of the Garcia family, who’s an actual judge. Just like the name implied, The Judge grand robusto has a larger and unique vitola at 5”x60” with a soft box press and a medium to full body in terms of strength. It is also worth mentioning that it was No. 7 Cigar of the year for 2017 on Cigar Aficionado.

As usual, the MF line impressed me with their band design. The golden scripted “MF” logo centered itself at the beginning of the final third mark, followed by “The Judge” right beneath it with its background fading into the walnut shell colored wrapper. Since it was the first time I’ve encountered this type of vitola, the cigar felt bulky, yet it rested comfortably between my thumb and index finger. The cigar had two very minor veins and a little weight to it, and firm to the touch. The wrapper appears dry visually, but there was a slight oily feel to it. Overall, The Judge has a very solid construction. 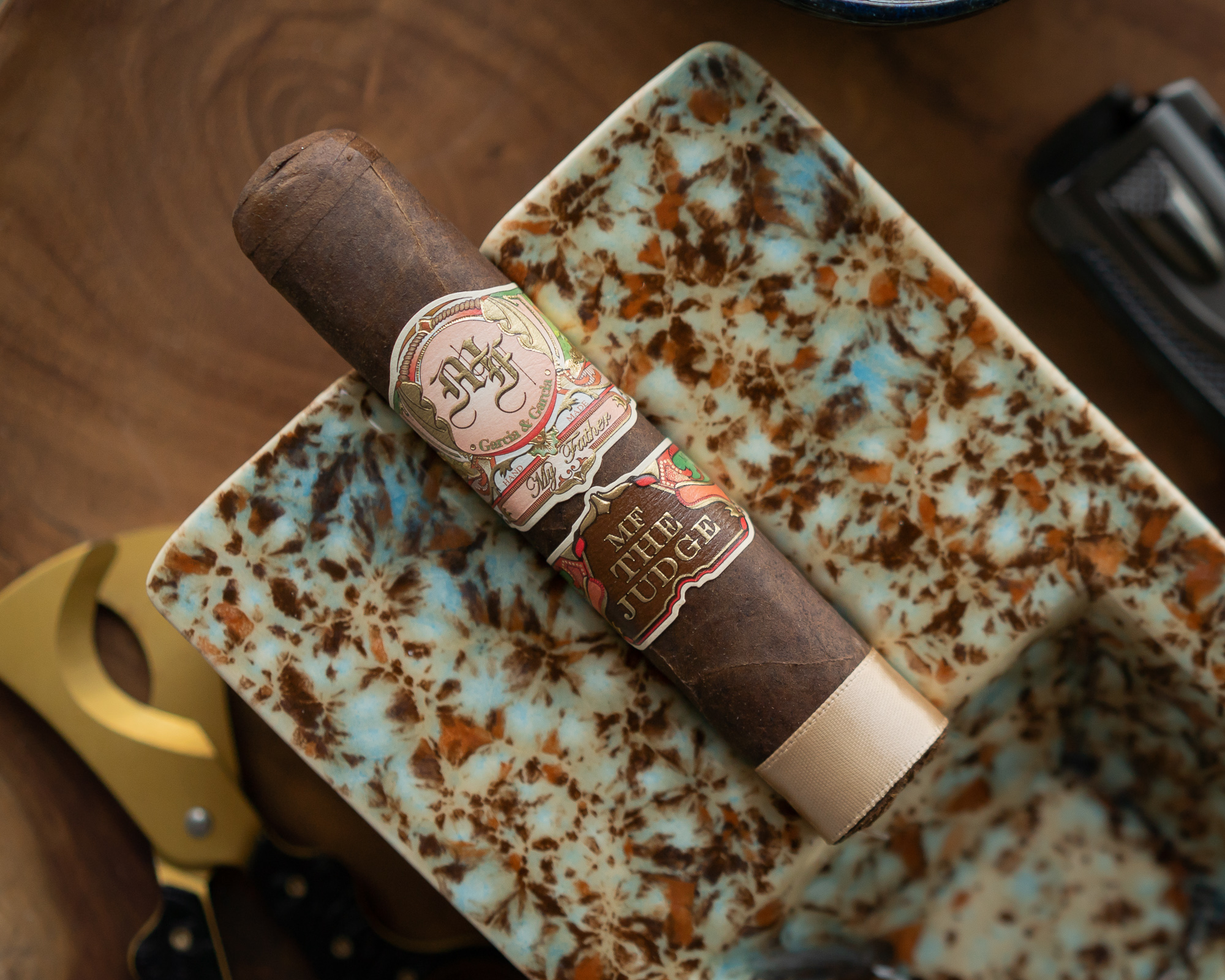 When dry pulling, I mainly get barn yard, dry wood, leather and a hint of caramel with white pepper spice at the finish. At the foot of the cigar, I was able to smell more of a barn yard funk and spice which made me sneeze a couple of times.

I took my time toasting the bottom foot of the cigar, making sure each side was toasted properly before making my way to the middle. Once smoke started to emit, I smelled the scent of sweet granola, dry hay and pepper. Upon taking my first pull, I was surprised as to how mellow the actual smoke was. Flavor wise; dry wood and hay was the main profile with a creaminess of raw almond and a sweetness of caramel. There was also a bitter and earthy accent as if you were gnawing on an old bark and soil. There were two interesting characteristics that I wanted to point out; the smoke was silky but dissipated quickly with a bitter taste that I can only associate to the bitterness from a bitter melon. On the contrary, the bitter smoke left a long-lasting lingering sweetness on my palate.

The Judge continues to evolve as I arrived to the second third of the cigar. The nuttiness took the lead at this point, the bitterness and the spiciness in terms of flavor toned down to a hint. The lingering sweetness still existed as well as the bitterness in the smoke, but I realized my mouth was drying out quicker than usual and the only experience I can compare this experience to is when you accidentally chewed on peanut shells.

To my surprise, The Judge still had much life to offer at the final third. In addition to the bitterness in the smoke, a much more delicate floral essence emerged. The white pepper spice was gone, and the hint of sweet caramel at the beginning became a salted caramel instead which offered a savory aftertaste along with the lingering sweetness.

The Judge was a very unique smoke, it was very complex and balanced. The cigar structure remains consistent throughout the whole session, which is why I barely mentioned it in my review. I enjoy the shift of flavor every now and then. However, it would not be one of my go to if I had choices between the MF line. The bitterness in the smoke is very off-putting, unless you enjoy the taste of a bitter melon.