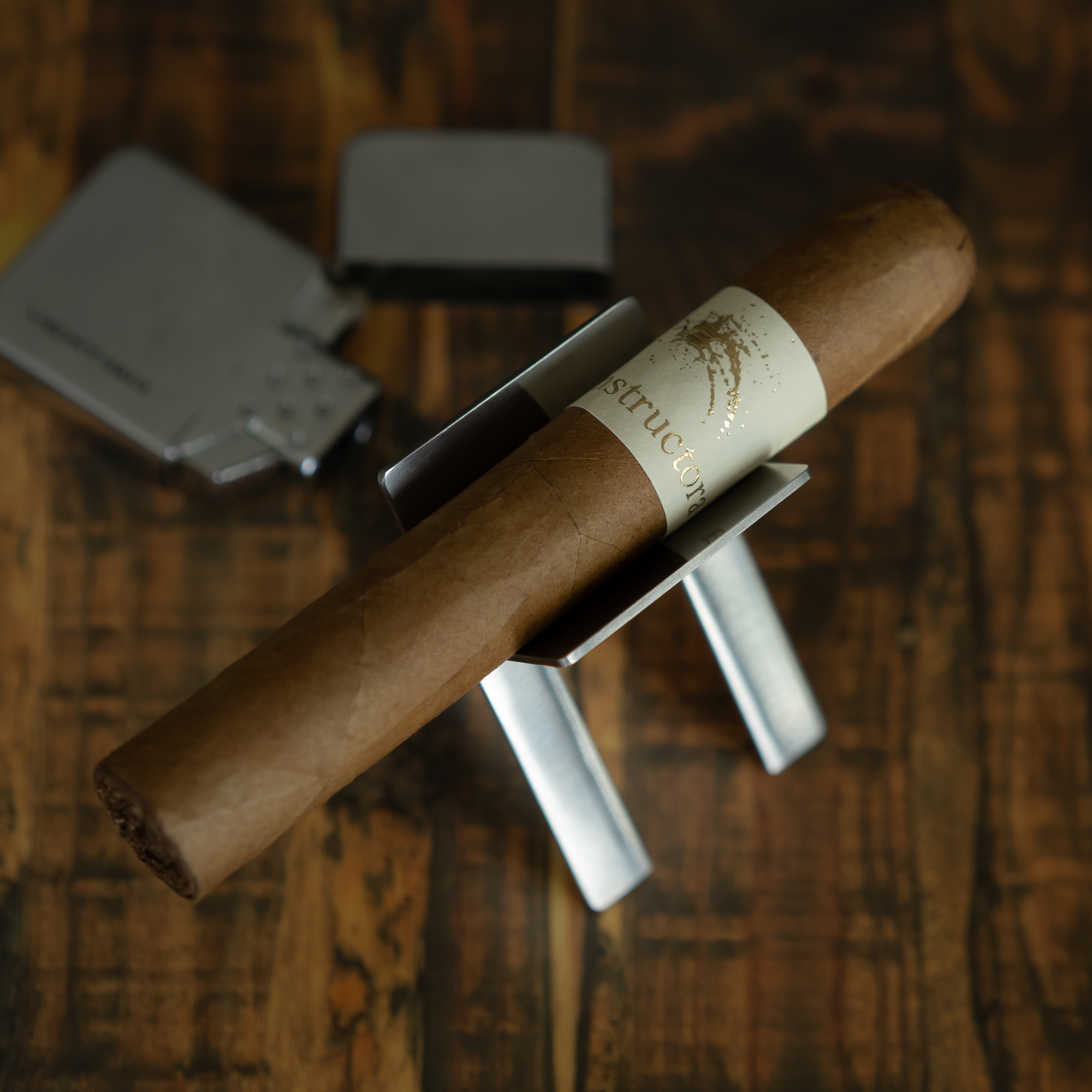 Up for review today is the new Delicado from La Instructora Cigars, a brand I fell in love with reviewing one of their limited edition blends that is now sadly out of production. The Delicado is notable as this brand’s only Connecticut wrapper cigar, in contrast with the brand’s other blends which feature bolder tobaccos.

For additional background on this blend, we turn to halfwheel:

Saide came across the wrapper during the process of blending the cigar at Tabacalera Palma, with the leaf catching his attention both for its color and its sweet aroma. He told halfwheel that the creation of the cigar was about achieving balance and minimizing the lesser desired qualities of USA-grown Connecticut. To achieve that, a  binder and filler from the Dominican Republic were selected, both of which are grown by Jochy Blanco and have enough age on the leaves to provide balance to the wrapper. “Jochy achieved this blend,” Saide noted.

Saide said that while the cigar is smooth and on the milder side, the smoker never has to “reach for flavor.” He noted that there is no ligero in the blend, a decision made to ensure balance among the components.

From a branding standpoint the Delicado is well done.  The metallic gold embossing contrasts well against the light wrapper leaf. I’m not sure what the logo is, but looks to be an impression of paint on a canvas (which makes a lot of sense if you’ve seen other bands from La Instructora). The outer wrapper leaf is golden brown in appearance, with a few noticeable veins and a velvety texture. When squeezed, the cigar has moderate give and I don’t detect any soft spots on the cigar.

The aroma off the foot of the cigar is surprising. It’s very full, with a very noticeable herbal and mint notes that sit next to cedar spice and something akin to moss. 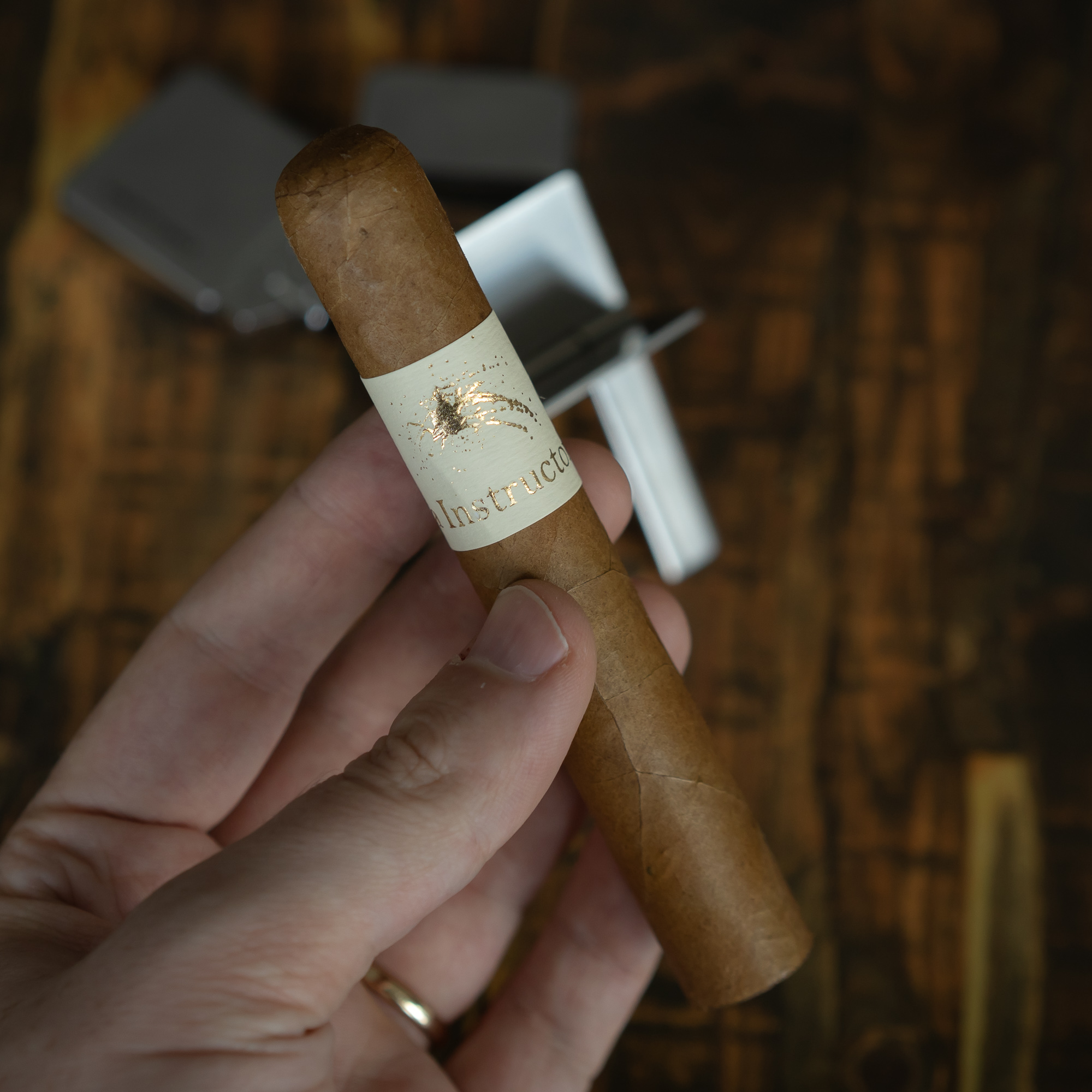 The La Instructora Delicado kicks off with copious amounts of mild bodied, medium strength smoke. The texture of the smoke is very smooth, and the flavors sit balanced between sweet (cream, vanilla), salty (popcorn, toasted nuts) and bitter (oak). It has a desert like quality to it, like an after dinner scoop of vanilla ice cream and an aperitif. The retrohale is mild, with some light spices and toasted bread. Construction wise, ash that develops through the first inch is solid white, and the burn is mostly straight with a little waviness.

The first major shift comes at the end of the first inch. The strength of the flavor increases markedly, and the overall profile shifts towards charred wood, bitter oak, and peppercorn. The nose though continues to be both gentle and extremely aromatic. Not quite as captivating as the beginning, but still enjoyable.

By halfway, the La Instructora Delicado  is mostly unchanged, but a bit of obvious harshness has managed to sneak in from time to time. Otherwise, flavors up until the final third are charred oak, toasted nuts, and baking spices. The retrohale though remains relatively mild and still aromatic.

In the final third, the La Instructora Delicado comes full circle and settles back near where it began, with an aromatic and mostly mild profile of baking spices, oak, vanilla and nuts. Thankfully the smoke remains cool, allowing me to smoke the cigar all the way to the nub.

The La Instructora Delicado has a lot going for it. First, an excellent start with a great flavor profile that I haven’t experienced in any other Connecticut blend. Excellent construction and smoke production as well. But, the flavor profile is at times burdened by encroaching harshness that muddies up the flavor, so it can’t achieve the higher rating it otherwise would deserve.

Brand evangelist, digital marketer, cigar and spirits expert specializing in consumer tasting and educational events. Matthias made the long trek from his hometown of Portland, Oregon to New York City in 2007, and in nine years has hosted more than 120 events and helped promote and launch dozens of cigar and whiskey brands in the U.S. In 2016, he joined the Cigar Journal Tasting Panel, blind-reviewing pre and new release cigars.
« AVO Improvisation Series 2019 Review» Davidoff Small Batch No. 7 Review