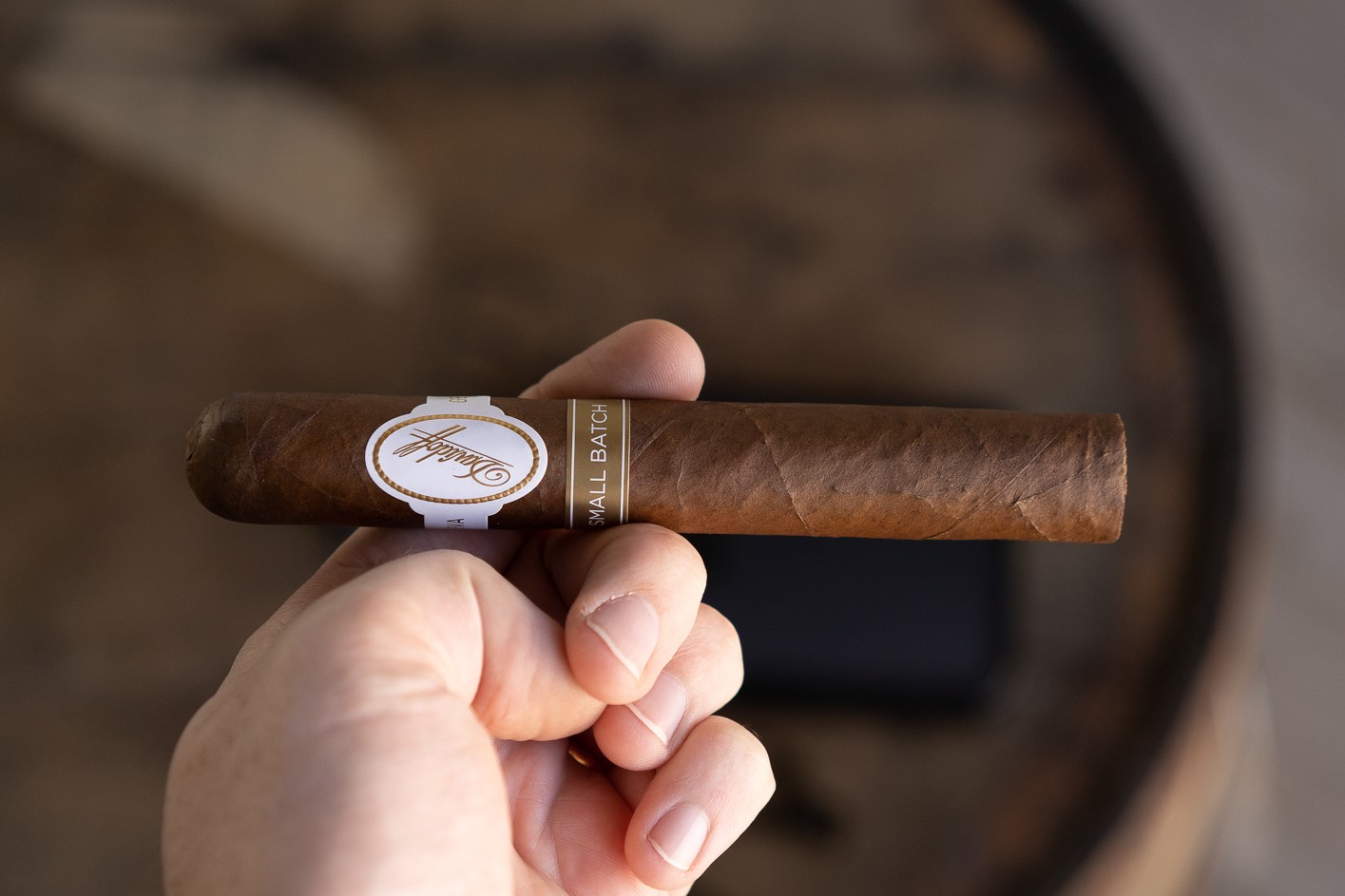 So today we’re reviewing the Davidoff Small Batch No. 7, just one blend in the new “Small Batch” line from the company that features nine new blends made with small batches of rare tobaccos. And they’re priced that way too, with the range running from $32 to $38 before taxes.

The Davidoff Small Batch No. 7 is a nearly flawless looking cigar and has a nice weight in the hand. The outer wrapper is a light chocolate brown with a somewhat basic looking secondary band. There’s only a slight give when squeezed, with no soft spots. Off the foot are notes of light black pepper, barnyard, and cedar planks. The draw is similarly unassuming, with just a bit of tingling spice, and sweet earth. 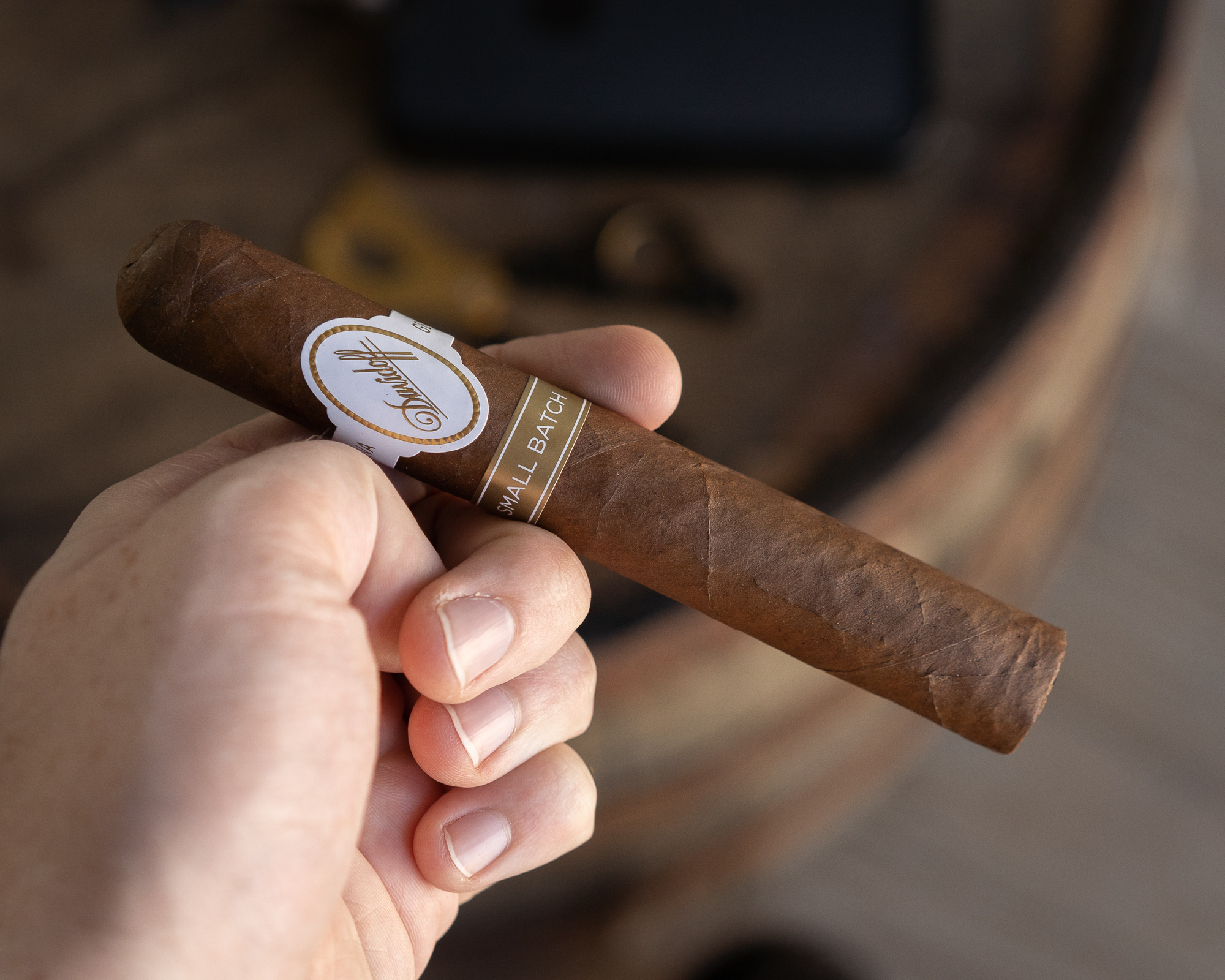 Once lit, the Davidoff Small Batch No 7 delivers an unmistakably Davidoff profile. Light on entry and gentle on the tongue, there are notes of dusty wood, fresh bread, grass, slightly bitter oak, and a very light, creamy cocoa that rounds the oak and grass out. Overall, it’s a profile balanced between bitter, sweet, and spicy (in that order). The retrohale is up next for evaluation, and its a mix of black/white pepper and paper. The strength and body of the smoke sit just above mild, though I sense (and hope) there might be more strength up ahead. Construction wise, the cigar is effortless to smoke, delivering copious amounts of cool smoke.

By the end of the first third, the Davidoff Small Batch No 7 is the first cigar I’d label an oak bomb. Very light on the palate, non aggressive, but very woody and round. There’s even a slight caramel note that creeps in on a few puffs which is quite nice. That said, I’m hoping for some more complexity as the smoke continues (it is nearly $40 after all).

It isn’t until halfway that my hopes are answered, but they are. The balance of flavors finally begins to shift, with sweetness replacing bitterness as the dominant flavor category and the smoke creeping past mild. Up first is oak, followed by creamy coffee and powdered sugar, with a nutty spiciness hitting last. The change is evident in the retrohale as well, with sugared toast and black pepper. Construction remains flawless, with the ash hanging on for well over two inches.

In the final third, the Davidoff Small Batch No 7 continues building in strength all the way up to medium. And the flavors are delicious, with a slightly sweeter oak followed by toasty black pepper, charcoal, sweet grass, and a light vanilla.

As much as I enjoyed the first half of the Davidoff Small Batch No 7, the second half stole the show. Not only did it dish out some much needed strength (the lack thereof in the first third is my only critique), but the transition from a mostly bitter profile to more sweetness was masterful, especially given that the cigar never fell out of balance.

Throughout the smoke, flavors range from bitter and sweet oak to coffee, powdered sugar, black pepper and spices. They’re flavors you can get with other cigars, but it’s the way they are woven together that make the flavor profile overall something special.

Brand evangelist, digital marketer, cigar and spirits expert specializing in consumer tasting and educational events. Matthias made the long trek from his hometown of Portland, Oregon to New York City in 2007, and in nine years has hosted more than 120 events and helped promote and launch dozens of cigar and whiskey brands in the U.S. In 2016, he joined the Cigar Journal Tasting Panel, blind-reviewing pre and new release cigars.
« La Instructora Delicado Robusto Review» Alec Bradley Medalist Review