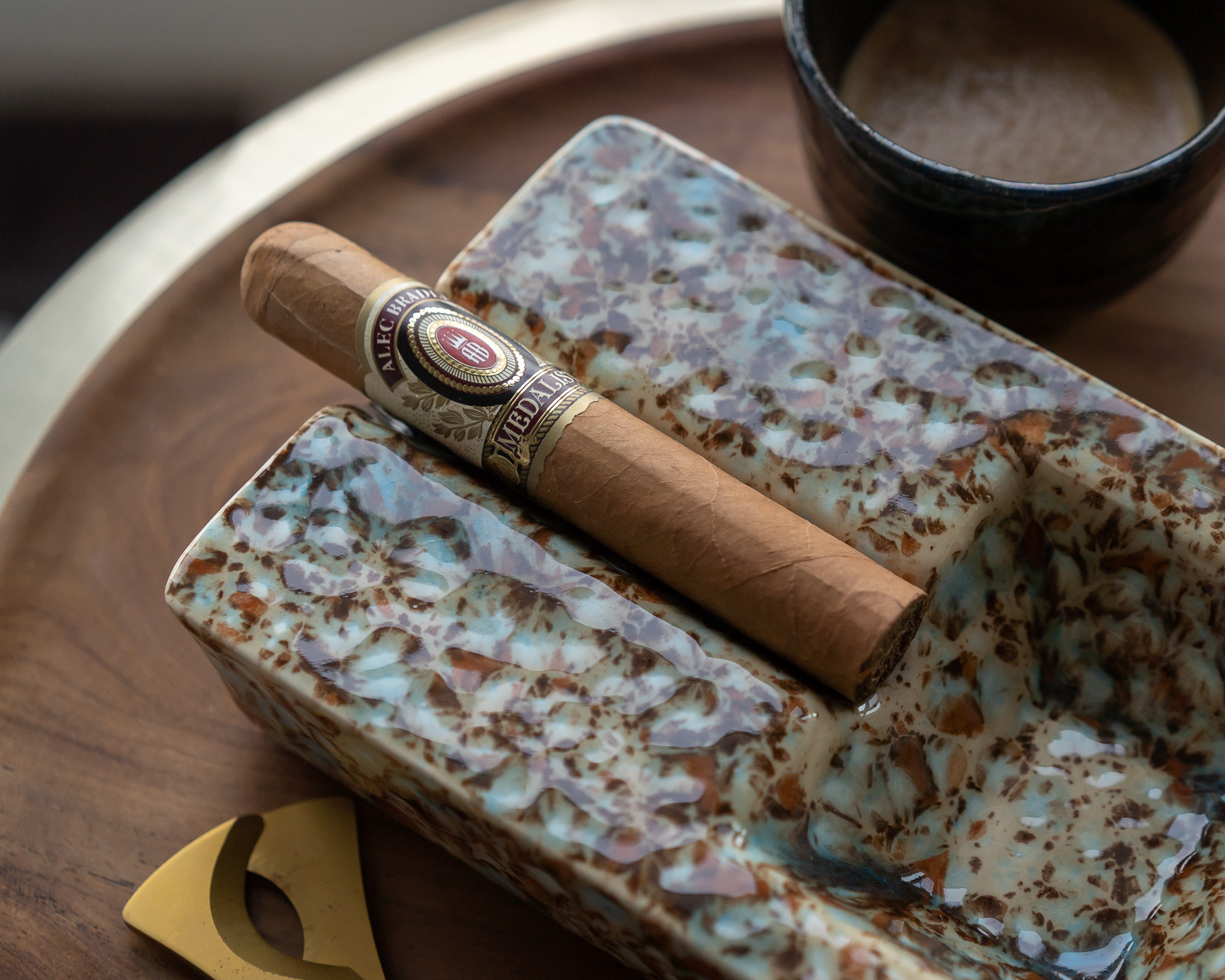 Alec Bradley cigars are almost always associated with a fuller bodied cigar in terms of strength. Alan Rubin, the founder of Alec Bradley wanted to create a different kind of product that could be enjoyed by the everyday smoker. The Medalist successfully carried out that profile by using a shade grown Honduran wrapper, Honduran binder and a mixture of Honduran and Nicaraguan tobacco fillers.

The band on the cigar is very thought out when designed. It incorporates a traditional AB logo in maroon and gold with a complex tan background. The cigar I’ve received had a small crack on the head of the wrapper that I hope won’t affect my experience, and two minor veins on the front and back side of the cigar. As I cut into the cigar, a small part of the wrapper undone itself which was expected due to the crack previously mentioned. However, it didn’t affect the structure of the cigar in any way. 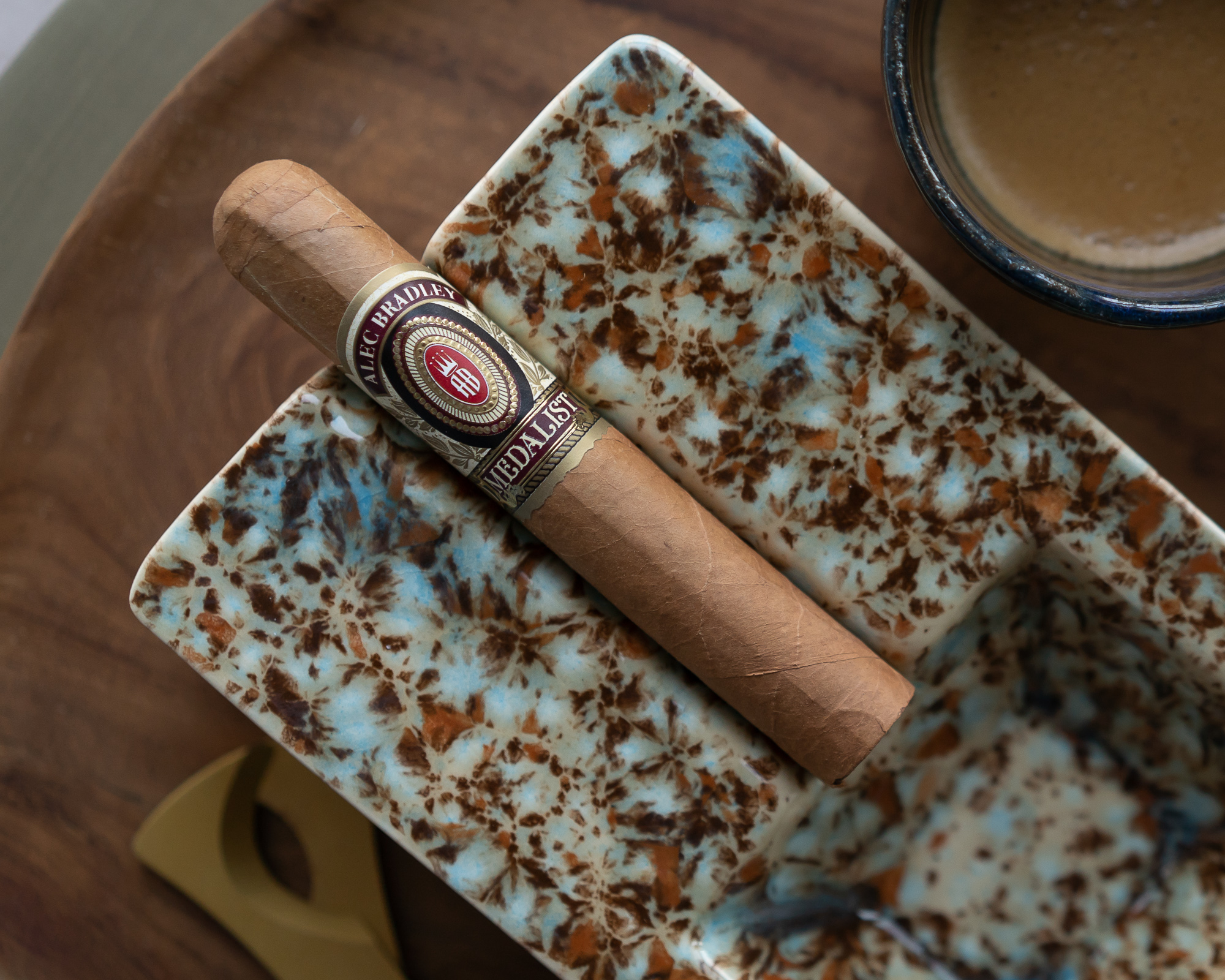 At the foot of the cigar, there was a light scent of tangerine, bread, hay and milk coffee. The flavors solidified as I took a dry pull with a nice addition of spicy pepper notes at the tip of the tongue.

As the cigar was being lit, the white silky smoke danced around my hand and I was overwhelmed with an image of a cool fall afternoon and the scent of warm pie as the ember grew at the foot of the cigar.

The first puff of the Medalist solidifies all the presumptions I had. The smoke was ample, cool, and silky with a nice creamy texture. At the forefront of The Medalist, a pleasant taste of nuttiness, hay, vanilla and Hawaiian roll with a hint of white pepper spice at the exhale. This left a tingly sensation at the tip of my tongue. The retro-hale was light just like the cigar, with a nutty and citrusy taste.

Half an inch in, a new taste of a French vanilla latte was introduced due to the vanilla and nutty flavor combination. I’ve also realized the burning has become uneven. I promptly set the cigar down, hoping it would fix itself. A few minutes passed and the burning became even again which was a win in my book.

During the second third, a crack appeared along one of the veins, but it wasn’t significant enough to affect the smoking experience. Hay and toasted bread dominated the flavor profile with a lite flavor of leather and vanilla at the finish. Usually I don’t purge the cigar this early on into the smoke, however, I purged it in attempt to prevent any other cracks or mishaps that happen for the duration of the smoke. As I took a longer pull from the freshly purged cigar, the creaminess and sweetness of the Hawaiian roll reappeared alongside some bitterness from the hay and leather profile.

As I reach the final third, the sweetness of bread is completely gone. All that’s left is hay, leather and charcoal in the profile. In my final attempt extract any flavor the Medalist has left to offer, I decided to purge the cigar again. Luckily the charcoal flavor subsided, and the hay, cream and nutty flavor was revived to provide a proper ending for the smoke.

Alan Rubin achieved his intent for the Medalist. The smoke was mellow throughout the whole experience, even though there were few hiccups along the experience (might only be this specific cigar since there aren’t any other construction complaints from other people) and not as complex as I hoped for. Overall, it was a great stick for your everyday smoke.