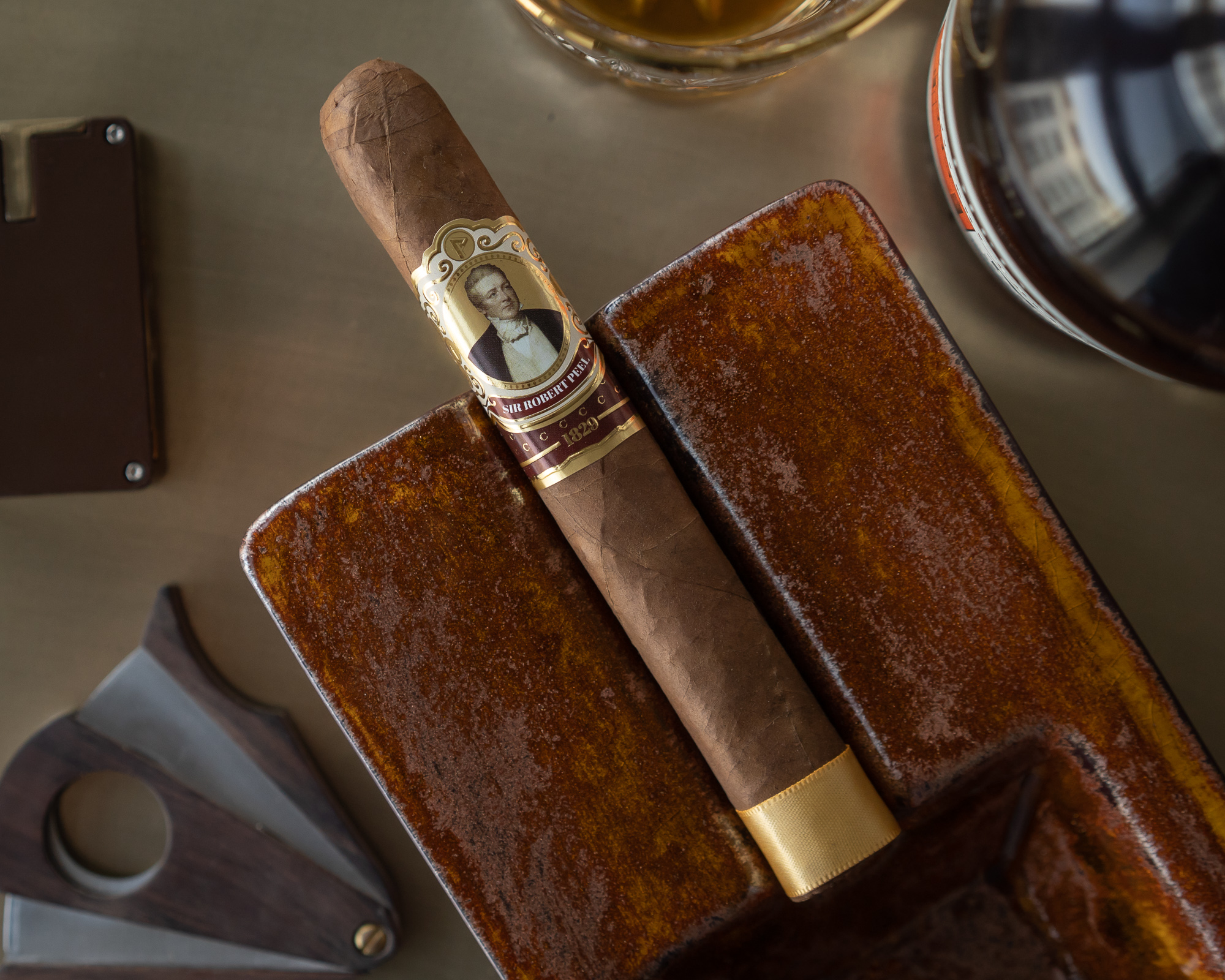 Up for review today is the Protocol Sir Robert Peel Natural from Cubariqueno Cigar Co. Produced at the La Zona factory in Esteli, Nicaragua, the cigar features an Ecuadorian rosado wrapper over Nicaraguan binder and filler tobaccos.

The outer rosado wrapper that drapes the Sir Robert Peel Natural has a few minor veins and a slight sandy texture to it. There’s a moderate amount of springiness to the cigar when squeezed, though I don’t detect any inconsistencies in the rolling.  The draw is perfect, about 7/10 in terms of amount of restrictiveness. On the tongue, the pre light draw produces some spice, bright citrus, and oats. Taking a whiff off the foot, there’s a blast of aromas, with bright spiciness, sweet hay, cedar strips, and coffee bean. 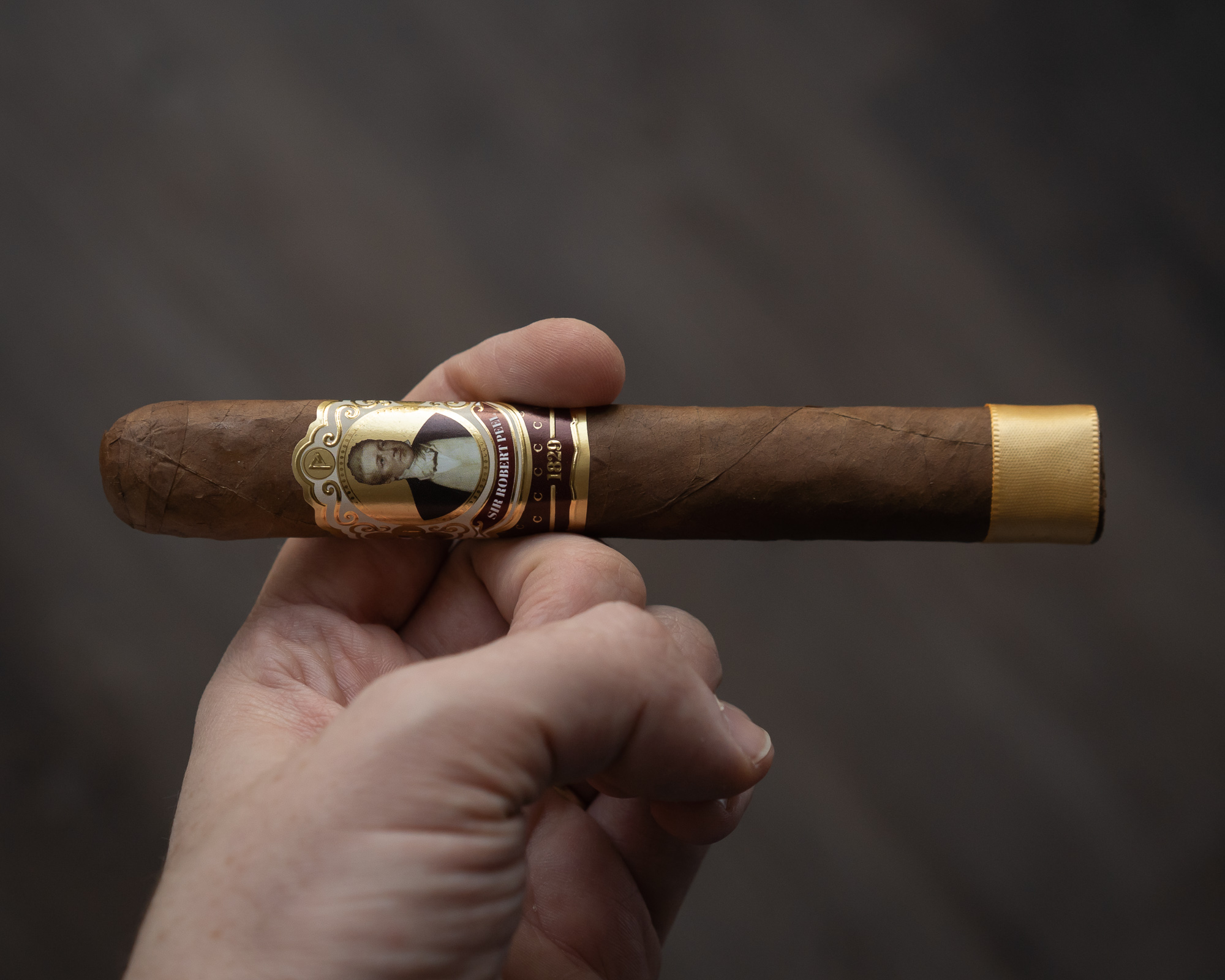 After toasting the foot for some time, I light up. The first few puffs of the Sir Robert Peel Natural are rich, spicy and aromatic. Wood hits the palate first, followed by sweet spiciness, coffee, and butter. The aroma is something else, a great mix of baking spices, chili powder, oak, and vanilla. All in all, a complex and very well balanced start, with strength at medium plus and body at medium.

By about an inch in, the burn on the Robert Peel Natural begins to stay enough to warrant a touch up. The smoke loses some of its aggressiveness, taking on a more buttery complexion and adding a sweet nougat note that I really enjoy. The retrohale still has some oomph to it, showcasing confectionary spices and a bit of chili powder. The Peel produces about an average amount of smoke, but the production increases as the cigar hits the halfway mark.

At halfway, black pepper enters on both the palate and the retrohale—and it’s perfectly balanced and harmonious. It’s an excellent development and really helps the cigar tell an interesting story. Otherwise, the profile is anchored by wood, nougat, chili powder, and Mexican chocolate. Both strength and body continues to increase, with both landing at medium plus by the end of the second third.

In the final third of the Robert Peel Natural, the strength continues to build all the way up to just past medium-full. Black pepper and charred wood make up the bulk of the flavor profile while bitter sweet notes of coffee, baking spices, and leather play beneath. The retrohale on the other hand shifts toward charcoal and black pepper.  As the cigar edges towards the end, the heat on the smoke does pick up, but it doesn’t stop me from smoking the cigar down to the nub.

The Robert Peel Natural puts forward strong but harmonious notes of wood, coffee, Nougat, chili powder, black pepper and baking spices. It’s got everything that I look for in a regular smoke: tons of flavor, well balanced complexity and a lot of flavor movement as the cigar progresses.

Brand evangelist, digital marketer, cigar and spirits expert specializing in consumer tasting and educational events. Matthias made the long trek from his hometown of Portland, Oregon to New York City in 2007, and in nine years has hosted more than 120 events and helped promote and launch dozens of cigar and whiskey brands in the U.S. In 2016, he joined the Cigar Journal Tasting Panel, blind-reviewing pre and new release cigars.
« Alec Bradley Medalist Review» Padron Family Reserve 46 Years Maduro Review