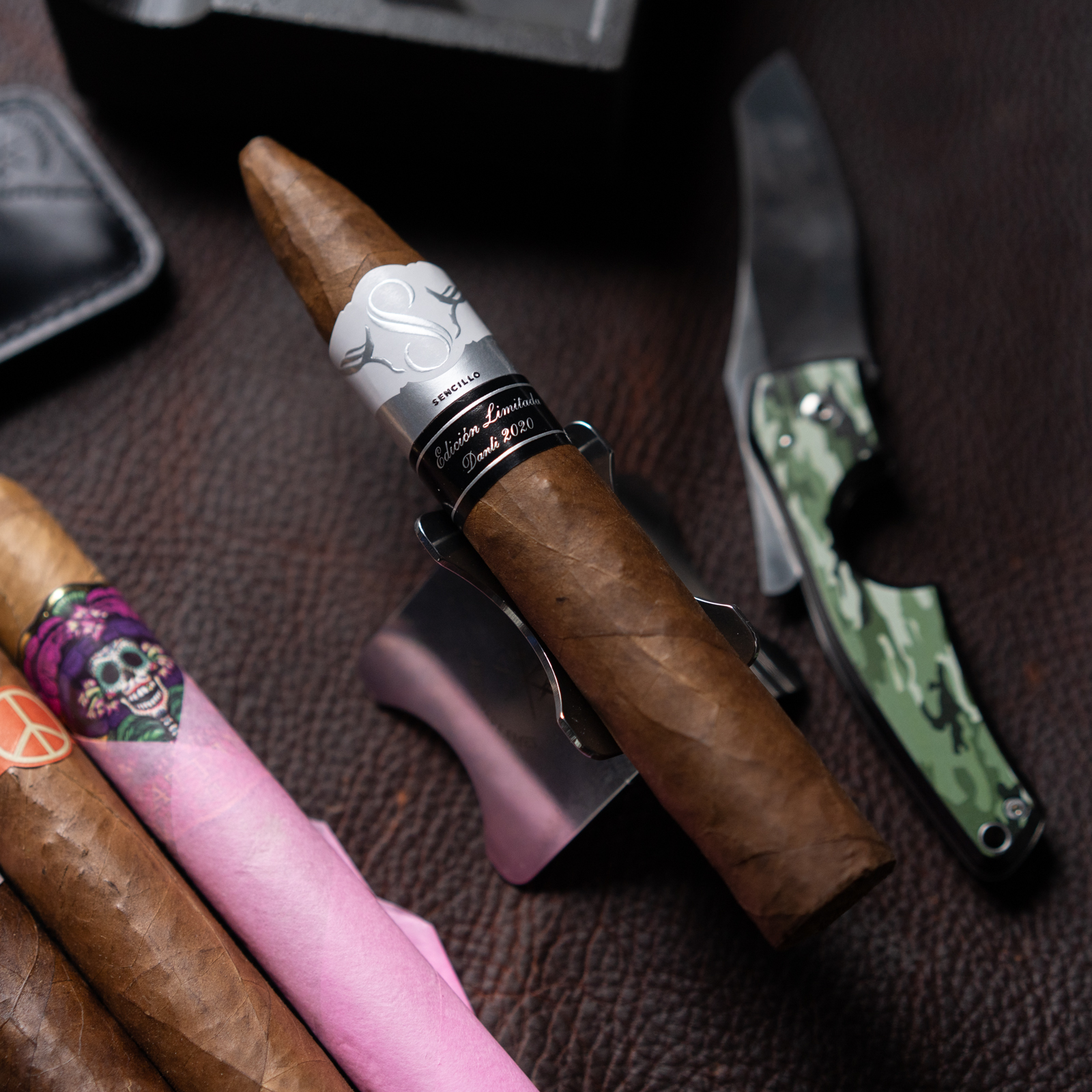 Sencillo Platinum Cigars are produced by God of Fire. Sencillo (Spanish for “simple”). Handmade in Danli, Honduras, the Sencillo Platinum blend uses Habano de Jamastran tobacco for the wrapper, filler, and binder, with Piloto Cubano tobacco added to the filler to balance out the flavor.

This cigar has a gorgeous, eye-catching matt colorado wrapper. The smell gives off a spicy and floral aroma as I run the cigar under my nose. The cigar gives off spicy, floral aromas as I run it under my nose. When I smelled the cigar’s foot, the earthy and barnyard smells carried my mind back to the farms in rural Alabama. There are no flaws in the cigar’s appearance. The dark wrapper is flawless, and if you had the time, you could count the veins in the tobacco leaf. The cigar feels excellent in the hand for a cigar of its size.

I used generic guillotine cutters to remove the cigar’s pyramid cap. Whenever I smoke a torpedo, my goal is to cut just enough of the tip, so the cigar draws well. It took a couple of dry draws for me to pick up the muted spice, citrus, and leather tasting notes.

My palate is struck with a surge of earthy tasting notes on my first draw. I went the soft flame route. I toasted the foot of the cigar with three matches from Shore Thing Cigars. The airflow as you pull air through the cigar is effortless. The cigar has leather notes and a tickle of spice beneath the surface. As we are into the first third of the cigar – I’m enjoying these bursts of deep earth flavors around the muted leather notes. The ash is just stanking dimes like a champ. I noticed a tiny mouse hole in the first third but didn’t mess with the airflow.

The cigar begins with white pepper and an earthy dash that slowly drifts away in a smoother or creamier taste when we move toward the second third. This cigar doesn’t put off a ton of smoke as it burns. It’s a great medium to full smoke – The smoke production is lovely white billowing clouds. The cigar has incredible construction – burn and draw are exceptional. It has nuttiness and earthiness. The flavors tend to rest on the tongue’s back and the roof of the mouth.

The white pepper and musk notes mark the final third – the flavors have been consistent throughout the cigar – as the cigar comes to and it warms up with more spice. The cigar finishes with a lovely mixture of fine leather, white pepper, and nutty tasting notes.

The cigar has near-perfect construction. I had zero issues with the draw or burn from the moment I lit the cigar to the second it rested in my ashtray. I’ll say not having to worry about construction issues added to the smoking experience. I didn’t have to touch it up a single time, and the cigar burned even the entire time.

The Sencillo Edicion Limitada Danli 2020 Pyramides grew on me the longer I journeyed with it. I expected a very pepper-forward smoking experience, but I engaged in a wide range of restrained flavors. It’s a cigar with several noticeable transitions, and the array of flavors reveals themselves to your palate. Those flavors include leather, white pepper, earth tones, baking spice, citrus, and nuttiness.

Justin Hunter: Justin is a writer, photographer, and social media manager for a magazine and media group in northwest Alabama. Justin is an armchair theologian, record collector, and coffee connoisseur in his free time. He was introduced to cigars during the height of the pandemic through a men's bible study in March 2021. Justin is still developing his palette by smoking both new-world and Cuban cigars to get a foothold in the wide world of the leaf.
« Blind Review: Ferio Tego Elegancia LE 21» Blind Review: Crux Limitada Redline (2019)