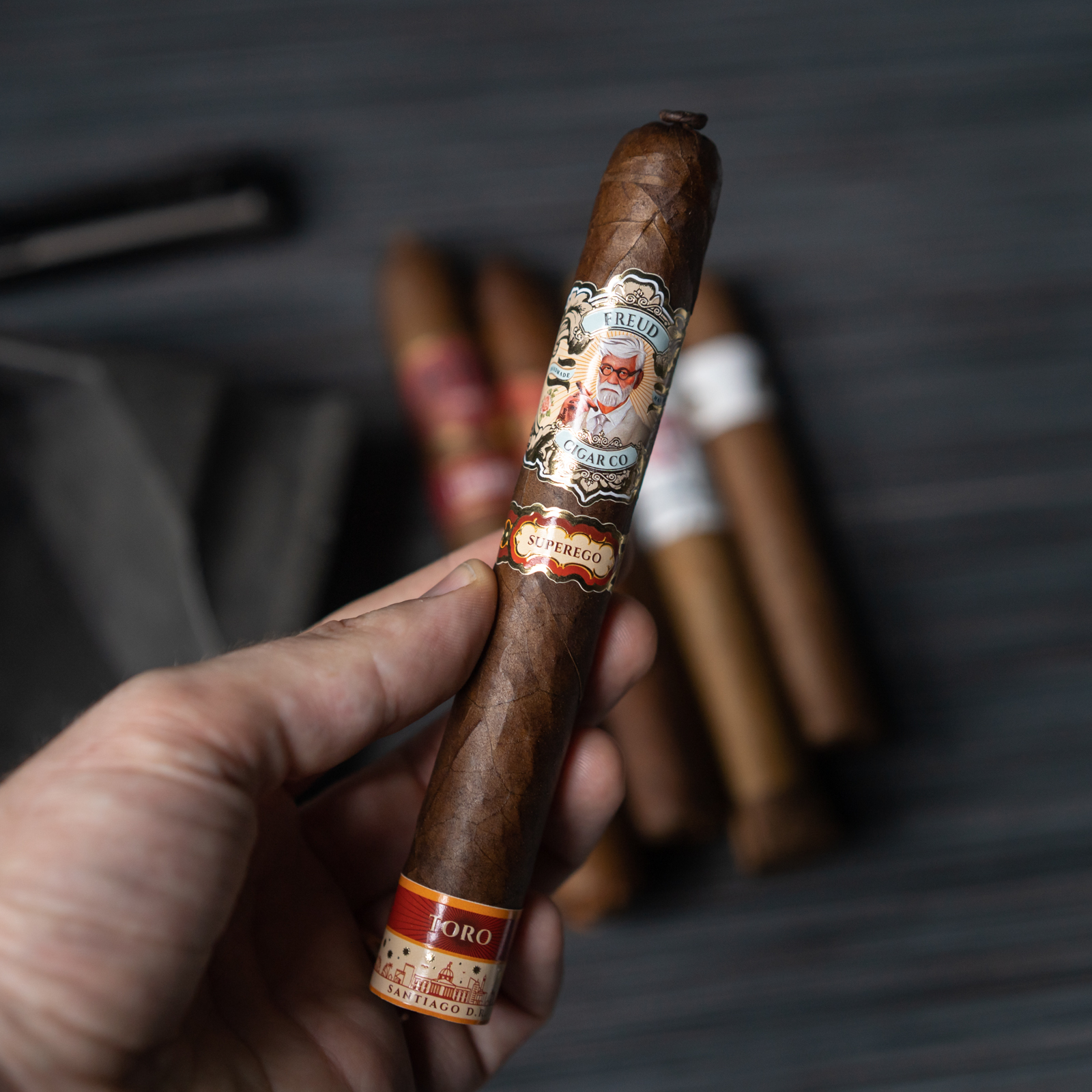 The newly formed Freud Cigar Company released their first cigar the Freud Super Ego Toro. For those who do not know, Austrian Dr. Sigmund Freud in his psychoanalytic theory devised three parts of the psyche: The Id, Ego, and Superego. The Superego being the moral learned consciousness between the Id and Ego. This toro pays homage to said part of the psyche. 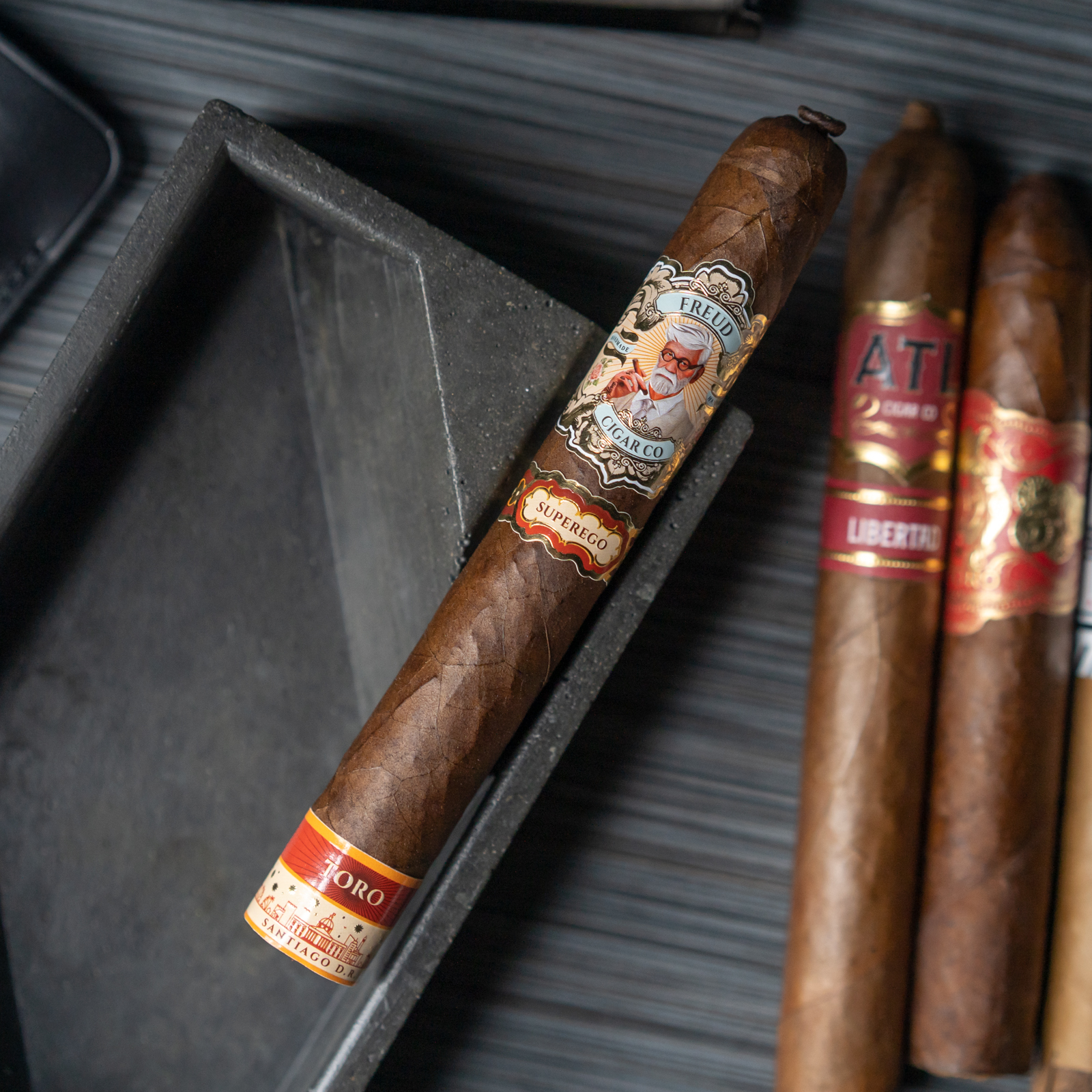 This toro sports a tight pigtail cap with a silky wrapper. There are some notable veins along the sides and to the touch the foot has a soft spot as I squeeze it. Visually the cigar’s Colorado wrapper looks rustic however the feel is smoother than you would think. The foot is barnyard, black pepper, and cedar.

I make a straight cut clipping just a bit more than the pigtail off. I take a cold draw that gives me sweet and tangy along with distinct aged oak barrel. Using a long match, I toast the cigar and the first puff has vanilla, earth and leather drying out my mouth. There’s notes of fig and nuts with another draw and a salty finish. I take a retrohale where white pepper and celery seed meet with a waft of smoke exhaling through my nostril. The strength is medium in body and with another puff there is some minerality on the back end.

The ash is dark grey and is holding firm midway. With a slow draw cinnamon and milk chocolate come to the fore front and linger for a while. Cedar and nuts provide a pleasing mix to the smoke giving it a nice balance. The retrohale brings on vibrant notes of orange peel and lemon zest with a creamy texture rounding out the flavor profile. Another puff and cinnamon and cardamon are in the forefront with a bitter finish. The cigar continues to be in the medium profile and the ash has started to fall off. 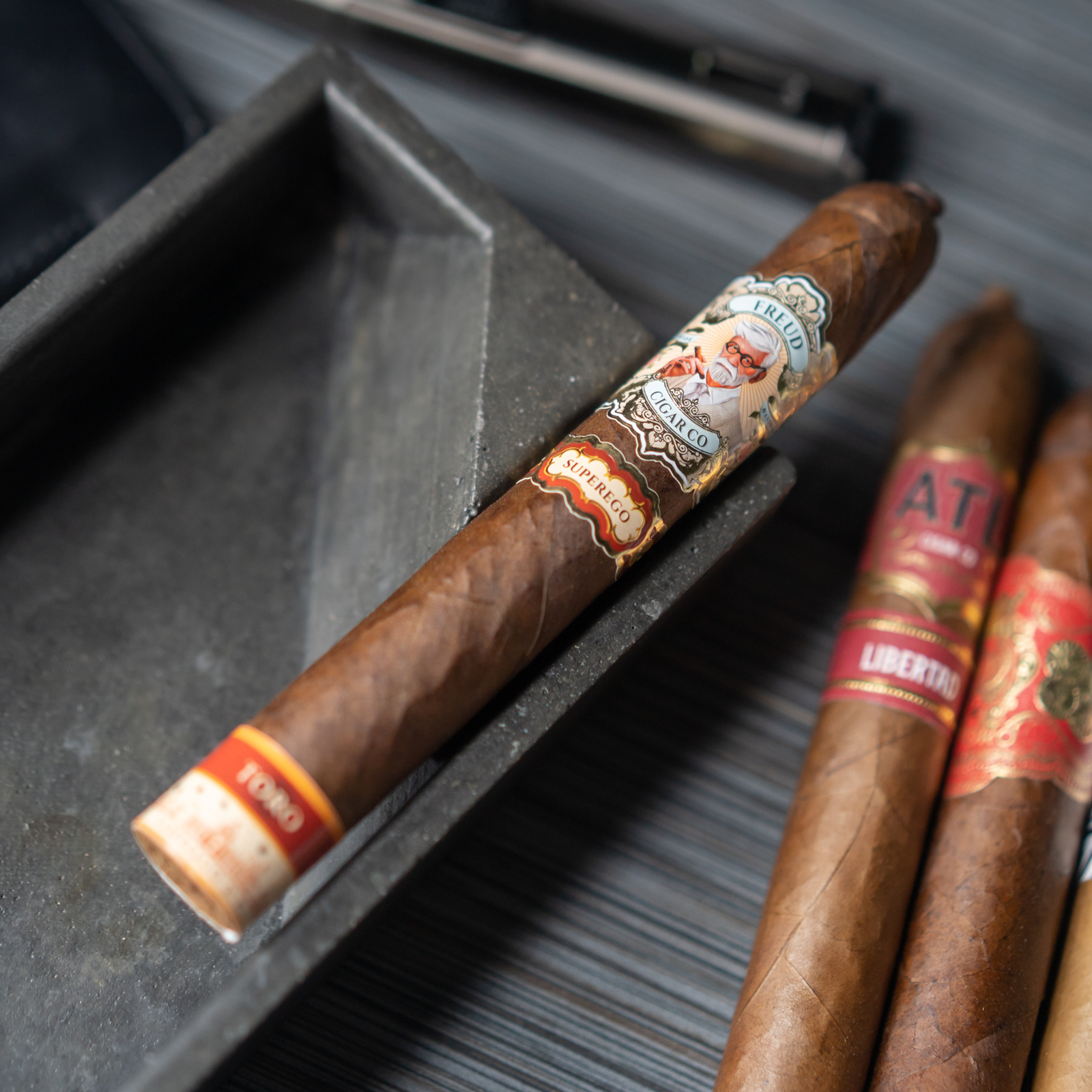 There’s serious wood and earth dominating the last third with saltiness that lingers on my tongue. Leather returns much like the beginning of the cigar that is drying the sides of my mouth. The draw is splendid and is allowing me to get the most out the smoke. With a retrohale toast and nuts reveal themselves ending with spice which hits my nostrils on the way out. The cigar has burned rather fast, and I take a final draw that delivers a dry bitter finish.

This toro started off with sweetness that turned to leather and dried out my palate to start. While midway there were pleasant flavors of spice and cinnamon the finish was rather short throughout. The retrohale gave the most flavor with pepper and vibrate fruit notes. Finding out this was a Freud Superego I was glad I was able to try one and if you can handle the price point it would be worth it to check one out.

Christian offers a perspective of cigars ranging from vintage pre-embargo smokes, hard to find cigars as well as current releases. His 22+ years of smoking and love of travel have taken him on cigar journeys here and abroad. From smoking HERF’s in friends backyards to smoking Montecristo No. 2s on the terrace of the Hungarian Palace Hotel in Lido Italy, Christian takes the “everyman” approach to cigar smoking being it all about taste and enjoyment of where you are or who you are with.
« Blind Review: Sinistro NV» Villiger Cuellar Black Forest Robusto