My life is a little crazy, crazy in a good way.  This week I found myself in Las Vegas for a job.  By some miracle of scheduling, I had a free evening – which never happens – and I decided to explore.

I was done with work at about 5pm, and I had to be ready for my ride to the airport at 9am the following day.  Sixteen hours!  Doable.

Unfortunately I was staying in North Las Vegas, and I have to take a $60 cab ride to The Strip. First order of business: tickets to a show.  I wanted a big, Vegas-style showgirls show, but I settled for a magic show with The Amazing Jonathan at Planet Hollywood.  No complaints though, it was hysterical. 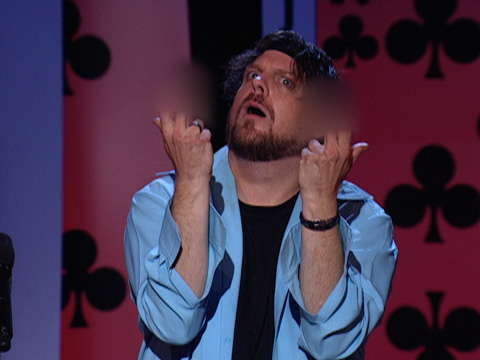 Next order of business: food.  I had heard the buffet at Harrah’s was amazing, and (why lie about it?) I really love an all-you-can-eat environment.  I got all the way to the restaurant, but the line was too long; I was going to miss the show.  So, I headed back toward Planet Hollywood, and it was getting so late, I had to grab burger at Wendy’s.  Fail.

After the show, I just wanted to explore.  I went to just about every casino.  I got to see the Bellagio fountain.  I saw the stupid, mini-Eiffel Tower at Paris and the stupid, mini-Empire State Building at New York, New York. 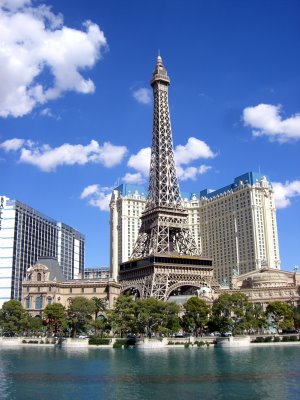 Lot’s of stupid stuff, but the sum of it all is really awesome and fun.  Clearly it’s not a place meant to be visited alone.  When I get a chance to come back with a group of friends, I’m sure it’s going to be a ton of fun.

I had the impression that Vegas was a cigar city.  I’m not sure where that came from, the movie Swingers maybe?  When I arrived and started looking around, I didn’t see anyone smoking cigars.  I saw a bunch of families, from all over the world, all having a great time.  I didn’t want to be rude by firing up a cigar in the middle of a crowd.

That was early in the evening.  After the show, I kept exploring, and the dynamic had completely changed.  It was now groups of friends, bachelor parties, and rich and gorgeous people.  Out came the cigars. (Of course there was still the gross element there: trashy people and sad slot machine addicts, but it’s easier to just look past them.)

I felt more than comfortable lighting up a cigar at this point.  I sat down in the sports betting area at Caesar’s Palace, in the big comfy chairs, and I pulled out a cigar I had brought with me, a Gurkha Park Avenue Series 44 Torpedo (6.25×52). 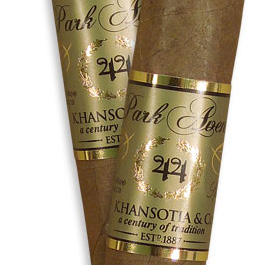 I was seated near three young guys smoking cigars.  I tried to make conversation, but their English was pretty terrible.  I think they were from Spain.  They tried though; it was actually kind of funny.

I don’t often get to smoke indoors, unless I’m at a cigar bar.  It was refreshing to be able to walk around, gamble a little and smoke.  I am not a huge gambler, but I love Roulette.  I played for a while, always better RED 33, and smoking this fantastic cigar.  Oh, I should mention that at midnight, it became my 33rd birthday, that’s why I was betting 33. I mentioned that to the couple next to me, and I had a birthday toast with them.  People were very friendly.

As a side note, I had never had a Gurkha before, and it was a fantastic smoke.  Great taste.  Very pure tasting.  Simple but not bland.  I will definitely give Gurkhas some thought next time I’m at the cigar store.

At that point in the night, it was just after midnight, and I still had a lot of exploring to do.  So I headed south, and I was determined to see as much as I could before I passed out from exhaustion.  Of course, the free drinks were taking their toll too.  (Yeah, I was drinking alone.  I believe in this rare scenario it is not a cry for help – it’s just what you do.  Don’t judge me.)

Around 2am, I decided I wanted another cigar and searched for a cigar store in some casino.  It seemed like most casinos has one if you looked hard enough.  I found a little store in The Excelsior, and bought a Macanudo Café Crystal

in a glass tube for $16.  Maybe I was being cheap, but the cigars were so overpriced, that I wanted to save a little money with a Macanudo.  Also, you always know what to expect with a Macanudo: simple, woody, reliable.

Long story short, I got in a cab at 3:30am and flew out in the morning after 3 hours of sleep and a hot shower.

What a great trip!  I get the impression that you have to go to Vegas a few times to figure out how to do it right: Where to stay, where to gamble, where to eat, where to buy cigars.  But for a couple of hours, I think I did a good job.  And, I gambled for hours, and left only down $15.  Success.

If you are reading this post, chances are you are aware of the new taxes that the New York state legislature have heaped onto already existing tobacco taxes in the state.  And like previous legislation, the new taxes fail to discriminate between fine tobaccos usually enjoyed in moderation (pipes, cigars, etc.) and the common cigarette. But we really shouldn’t be surprised that state and city politicians seem intent to remain ignorant about basic distinctions between fine tobacco and common cigarettes. After all, it is in their interest to stay ignorant: ignorance allows politicians to to exploit the democratic process to target all smokers for funding.

At its most basic level, though, fine tobacco lovers should realize that new taxes are simply a more obvious manifestation of age old politics: group a (revenue hungry politicians) joining group b (well-meaning anti-tobacco groups) to unfairly, unreasonably, and punitively tax and coerce group c (those who enjoy tobacco) out of their money and their individually chosen lifestyles.

What is most interesting about New York City as a case-study for tobacco public policy is how tyrannical and simultaneously counterproductive it ultimately is. Recent decades have seen NYC develop a legal precedent for higher tobacco taxes and tighter smoking regulations.  This public policy mix, however, has and will continue to have dramatically negative effects on individual liberties and the tax revenues that politicians today are so desperate to take from vulnerable groups of citizens.  As the city bans smoking in more and more places, many fine tobacco lovers have had to move to lounges simply to have a place to smoke. This is a bearable scenario as long as cigars/fine tobacco stays reasonably priced. Unfortunately, tobacco tax increases push prices up, which effects customer purchase decisions – so less go to lounges. Lounges find themselves more and more burdened by taxes, regulation, and a dwindling market, and ultimately go out of business. Smokers of all types (even moderate cigar smokers) suddenly find themselves with overpriced products and no place to smoke. Anywhere.

The essential result is a government mandate by the coercive power of taxation and regulation to make you live your life a certain way.

The causal chain can be summarized as follows:

1. Government implements tobacco taxes.
2. Some people (on the margins) stop smoking.
3. Government bans smoking in public places.
4. Individuals must go to private locations (lounges or home) to smoke.
5. Government wants more money, and raises taxes the easily taxable: tobacco.
6. Taxes are passed on to consumers, and less can afford lounges/shops.
7. Tax burden and decreased market close lounges.
8. Smokers are left with almost no locations to smoke legally.
9. Some smokers break the law, many cannot afford to smoke/abide by the law.
10. Tax revenue from smoking drops off – politicians have overtaxed and exhausted tobacco users. They now turn to increasing taxes on the rich, businessman, other products, or the poor through inflation (on the federal level).

Result: Individuals for all intents and purposes lose the freedom to smoke. The government has coerced (ultimately at the barrel of a gun) a particular set of values and norms on a large group of individuals. The government destroys a source of revenue.

The most discouraging aspect of the current political trend, though, with respect to tobacco taxes and regulation is how obviously short sighted it is.  State and city policy makers don’t understand the importance of basic incentives.  As taxes rise, rational smokers will undoubtedly begin to wonder, “if tobacco is so expensive here, why not simply purchase it elsewhere where the taxes don’t apply?”  Evasion of unreasonable taxes takes many forms: some may buy online, through unregistered dealers (aka the black market), or will simply drive across state lines.  Thus as the state raises taxes in the hope of increasing tax receipts, they will ultimately begin pushing revenues to other states or organizations. No one benefits. State tobacco revenues will stagnate, some smokers will be forced to quit, and some will still smoke – but only after more hassle and frustration.

Does all of this sound extreme? I think so. But then again, take a look at the tax increases in the past ten years, and you will realize that imagining taxes perpetually increasing really isn’t that hard.

And so I am stuck wondering when politicians and those who hate any and every form of tobacco will realize that democratic theft and tyranny, aside from being morally reprehensible, actually won’t solve any problems in the long run. We’ve tried Prohibition before – why should anyone believe that half-assed Prohibition will work any better?