From the depths of Buffalo Trace rises a single barrel ideal for sitting in front of the fire with Harry the cat on your lap.

What? No pets and you’re telling me the season changed?

Don’t worry. This bourbon is a suave, smooth delight anytime with or without an animal companion.

Scents waft to your nose full of fruit, cinnamon, nutmeg and nuts. It’s as if you baked apple and pecan pies, then distilled, aged and bottled them together. The soft easy-going flavor was rich, complex and as comfortable as your favorite couch. I added some water, but it didn’t add or subtract any value.

With a high rye content, you won’t think Elmer T. Lee is 45% ABV. Yet this whiskey is so balanced that a Manhattan “up” cocktail works well. I suggest you cut back on the sweet vermouth at 50% of the usual recipe. In fact, try the “perfect” version using ¼ oz. bianco and ½ the standard red. One challenge is the cost. You must conduct a detailed search to find a price on the low end; if you can even find a bottle at all.

The moral of the story is patience pays and glory awaits. Ask my furry friend Harry. It’s worth the trip.

USC review: This is a tour-de-force of a bourbon that overflows with aromas of brown butter, toffee danish, & charred cinnamon. The palate is expansive and delicious echoing the earlier flavors and adding sweet corn puree, baked pear, and roasted oak sweetness.

Whiskey Sidekick review: You can’t beat Elmer T. Lee for the flavor and value. This particular barrel that we sampled gave us quite a different profile than what would be considered “standard” but still was exquisite. ETL is pretty darn rare so grab it when it’s available as you won’t find a better or more consistent single barrel bourbon for the price. Earned all of its 4.5 glasses and we will definitely be picking up every bottle we come across. 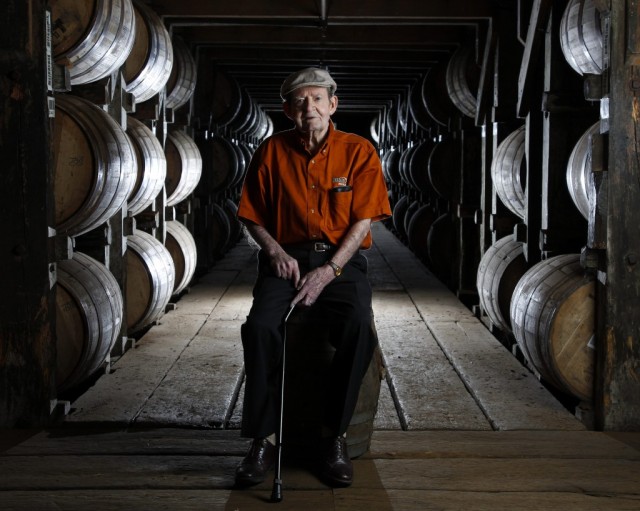 It is with a very heavy heart that I share with you that our beloved Master Distiller Emeritus Elmer T. Lee, 93, passed away July 16, 2013 after a short illness.

In the world of making really fine whiskey the role of Master Distiller is pivotal, but Elmer’s meaning to those he met, came to know, and worked with closely extended far beyond that of a Master Distiller. Elmer defined, in the simplest terms, what it means to be a great American – hard working, self-made, courageous, honest, kind, humble, and humorous.

Elmer was born in 1919 on a tobacco farm near Peaks Mill in Franklin County, Ky. He graduated from Frankfort County High School in 1936 and worked for Jarman Shoe Company until December 1941. He then served with the U.S. Army Air Force in World War II as a radar bombardier on a B-29. After flying missions against Japan through 1945, Elmer was honorably discharged in January 1946. He returned home and studied engineering at the University of Kentucky, where he graduated with honors in 1949.

In September 1949 Elmer began working in the engineering department of the George T. Stagg Distillery in Frankfort. In 1966, Elmer was promoted to plant superintendent, responsible for all plant operations and reporting to the plant manager. 1n 1969, he became plant manager.

But it was in 1984 that Elmer’s contribution to the bourbon industry gained him the most notoriety, when he introduced Blanton’s, the world’s first Single Barrel Bourbon.  Elmer retired in 1985 but continued to serve as an ambassador for Buffalo Trace, and in 1986 he was honored with his very own single barrel bourbon, Elmer T. Lee. Of course, for those of us who knew Elmer, he never really retired. Every Tuesday we could see Elmer making his rounds at the Distillery in his trademark cap, signing bottles, posters, and other memorabilia at the Gift Shop, visiting his friends in Blanton’s Bottling Hall, and tasting bourbons (for quality control purposes!) in the lab.

Elmer was always ready to offer advice, and was a wealth of information that many of us relied on, myself included. Harlen Wheatley would inquire with Elmer when stuck on a mechanical problem, and any historical questions about the Distillery always went to Elmer, who, with his razor sharp memory, could invariably answer.  To all of us, Elmer was a friend, a mentor, and a trusted advisor.

Elmer was known through the bourbon industry for his expertise and knowledge about bourbon whiskey and he received numerous awards and recognition, including induction into the Bourbon Hall of Fame in 2001, the Lifetime Achievement Award from Whisky Advocate in 2002, and the Lifetime Achievement Award and Hall of Fame induction from Whisky Magazinein 2012.

We have lost a wonderful friend today, and he will be missed terribly.

Services for Elmer T. Lee are pending and will be announced shortly.