Below is another guest review by Charlie Freeman, a NYC based cigar enthusiast who works at Ash Cigars on Washington St. in Hoboken. 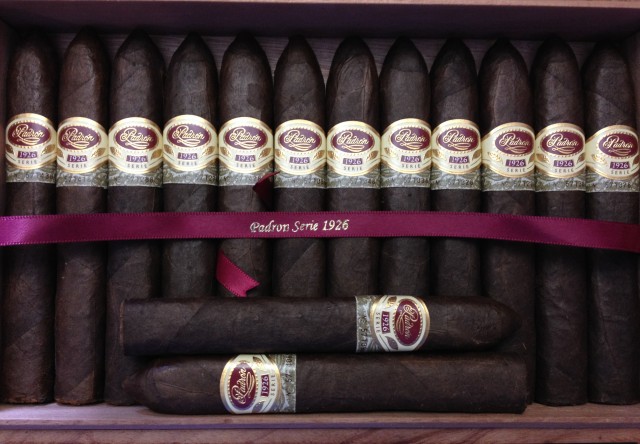 It’s a windy Monday afternoon at Ash Fine Cigars in Hoboken as I start my closing shift. One of my two bosses, a full-blooded Cuban-American, is in the mood to smoke and asks me to join him. As an extra incentive, he offers me whatever cigar in the shop I choose on the house. The decision requires little to no thought. I immediately go for a cigar that, substance aside, is positively Cuban: The Padron 1926 Anniversario No. 2 Maduro. 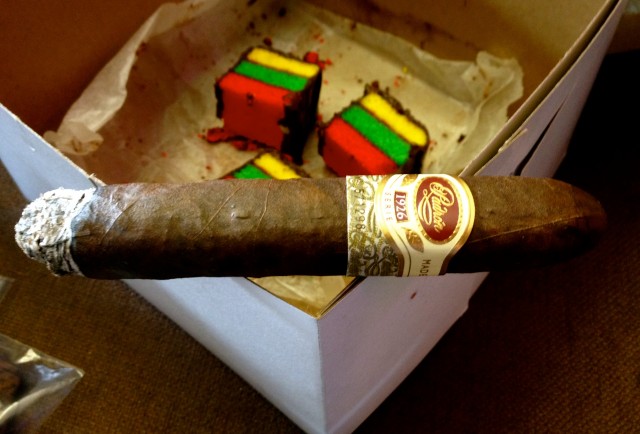 First and foremost, this stogie bears the name Padron, a name which guarantees consistent precision and beauty in the construction. Thus not surprisingly, the construction of this cigar is impeccable. Yet the ’26 No. 2 itself takes the appearance & construction aspect and kicks it up a notch. Though the wrapper is rather rough, there are practically no veins visible on it and there isn’t a single soft spot to be found on this box-pressed beauty. The absence of soft spots in particular is a very good sign; guaranteeing that the stogie is fully packed and therefore won’t burn out or canoe as easily. What is also worth noting is how the stick holds up after being cut: after being dealt a swift V-cut, there is not a single scar to be found outside the cut itself; it’s as if the nub was never touched. This should be good.

Smoke and the Flavor

Armed with a piece of cedar wood as my torch, I light up and quickly find the draw to have such low resistance that it is almost transparent. This causes me to wonder for a split second if I had suddenly forgotten how to puff a cigar. However, my confidence in my long-term memory is just as quickly restored as I am greeted by a thick, smooth and aromatic cloud of smoke. While it’s important for a cigar to breathe freely, a certain amount of resistance in the draw is needed in order to create the sensation that guarantees that the stogie is indeed being puffed. For good or for bad, this is the first time that I’ve had this kind of experience with a premium cigar.

Flavor: another key aspect in which the No. 2 Maduro takes Padron’s excellence to the next level. The unusually natural sensations and accents of wood that are typical of a Padron cigar are ever-present, of course. But this little gem has another peculiar note within the mix: a slight sweet sensation that is somewhere between raspberry and cherry. These two opposing forces balance each other out for the entire length of the cigar, making for a well-balanced and most enjoyable smoke.

I prefer to give the bad news first, so here it is: I found the draw to be subtle to a fault, which keeps it from earning an A+. However, it should be noted that you can’t knock something until you try it. Hence I encourage you, the reader, to smoke it yourself and give your own verdict, for not every smoking experience is exactly the same. That being said, let’s hear the good news: This cigar defines excellence in all other conceivable aspects; construction, flavor, aesthetics, aroma, you name it. You know a cigar is good when you end up smoking it all the way to the nub, despite your burned fingertips, with the ash still holding on all the while. I used to be all about the Padron 1964 Anniversarios. But as great as they always will be, I have since found a new favorite Padron.

This cigar review is a guest post by Charlie Freeman, a good friend of mine from my college days. Charlie is an avid cigar smoker and also works at Ash Fine Cigars in Hoboken, NJ. 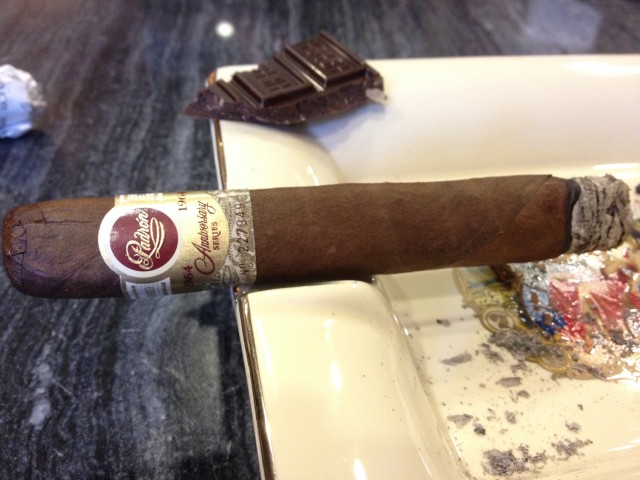 Up for review on this sunny Tuesday afternoon is a cigar that is turning twenty this year. It is a line that has consistently scored between 90 to 93 points in Cigar Aficionado magazine ratings; it has constantly earned a high place in the CA’s top 25 Cigars of the Year list; and for all these reasons and more, it is a personal favorite of yours truly. Bearing a name that has become synonymous with precision, tradition and all-around excellence, the Padron 1964 Anniversary Series cigar line has rightly taken on a life and legend of its own. 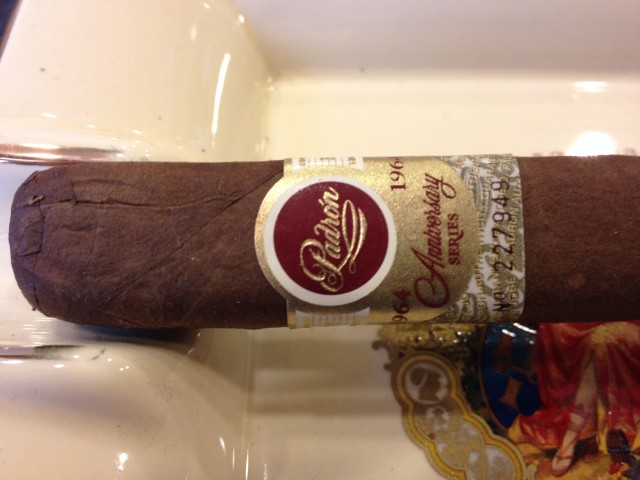 As is the standard for all Padron Cigar, the ’64 Diplomatico is blessed with a brilliant appearance; carefully box-pressed in accordance with Cuban tradition, and beautifully adorned with a wrapper whose perfection lies in the subtle irregularities of its structure, giving it a truly natural appearance that no cigar smoker of any caliber can resist.

Upon lighting up, I am greeted by a slightly thin, yet smooth smoke. The smoothness of the smoke induces a feeling of relaxation and comfort. At the same time, the subtle thinness of the smoke leaves me wanting more with every puff. This brilliantly complex smoke remains consistent throughout the length of the cigar.

The flavor can be summed up in two simple words: dark, and natural. From beginning to end the Diplomatico’s flavor is everything its exterior appearance suggests, with unusually natural sensations of nutmeg and wood at the forefront and the occasional note of coffee subtly working its way into the mix.

After a lovely hour and a half, the Diplomatico is on its last puffs, with the spicy sensation that is typical of Nicaraguan tobacco dominating the final moments.

While I am used to a Padron being a slightly thicker smoke than what was presented, the Diplomatico still remains a winner in every sense of the word. It is a delicious, brilliantly constructed cigar that holds its form and doesn’t canoe, ensuring that whoever smokes it will be able to enjoy what’s happening around him without having to worry about manually maintaining the integrity of the cigar. Without a doubt, the Padron family has scored yet another home run with the ’64 Anniversary Diplomatico. 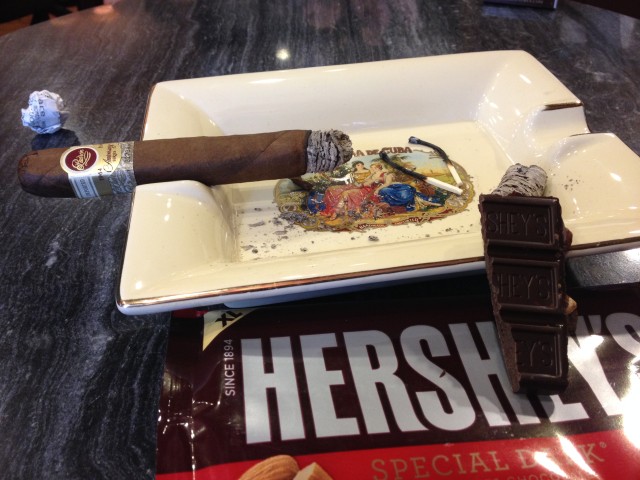 Complement this dark and earthy cigar with a rich cup of coffee (no sugar, cream is optional) and a bar of Hershey’s Special Dark Chocolate.

In recent months, my cigar smoking has taken me away from the Cigar Inn on 52nd and over to the Nat Sherman townhouse on 42nd and 5th avenue. The store now features plenty of room to sit down and enjoy your smoke, and the world-class ventilation really helps keep the smoke enjoyable. I’ve recently been on a bit of a Padron kick, so I figured I’d give the Padron 3000 a short review.

Construction & Appearance
The 3000 has a similar appearance to other Padron maduro cigars. A dark, almost rustic brown Nicaraguan wrapper with tooth, a few veins, and the standard Padron band. With this cigar you’ll also find nearly perfect burn all the way down, usually requiring no touch-ups at all. The draw is slightly loose, which can account for the power I usually get from the larger ring gauges. Off of the foot of the cigar you’ll also notice a strong natural tobacco aroma that has heavy notes of leather and spice.

Flavor & Smoke Characteristics
This cigar opens up with a big, dry spice, with hints of sweet tobacco and some leather. If you’ve had the 2000, 6000, 7000, etc, you know that the size and ring guage on this cigar makes a big difference in the taste. As I move further in to this cigar, it is obvious that, though not as sweet and chocolaty as the 2000, this cigar has (in my opinion) better balance of flavors than the 6000 or 7000. At about 2/3, the strength and body of this cigar continue to build, with notes of coffee, cocoa powder, spice, and leather. My only complaint smoking this stick is that it, because of the ring gauge, this cigar can be a bit overpowering.

Conclusion
This isn’t, as other reviewers have noted, a cigar for beginners. The new cigar smoker will get smoked-out very quickly. But, for the veteran, this is a must-try. I’d also recommend the 2000 series.